The latest cinematic stab at a swashbuckling epic is a useful primer of filmic derring-don'ts. 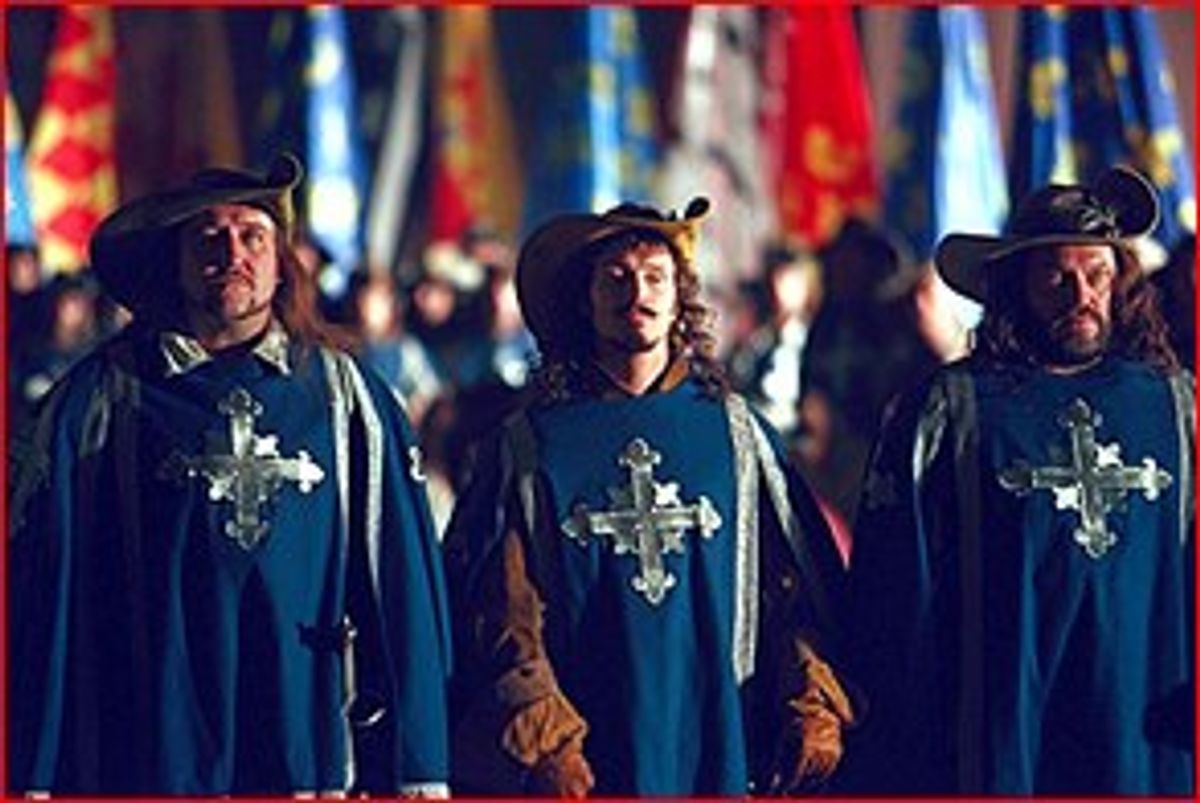 By the time the legend "14 Years Later" appears on screen early in "The Musketeer" -- after an opening, plot-instigating set piece that instigates the plot and a credit sequence keyed to a pounding score that squeezes any spirit you might bring to a swashbuckler out of you -- it feels like 14 years have passed since the lights have gone down.

But I can report that with "The Musketeer," director Peter Hyams maintains his perfect record -- nearly 30 years in the business and he still hasn't made a good movie. (His other stellar efforts include "End of Days," "Timecop" and "Narrow Margin.") When you read Alexandre Dumas' "The Three Musketeers" (and I just read it for the first time last year), you of course start imagining the possibilities for a movie. It's so juicy and rich in narrative and so funny about the derring-do of its swashbuckling heroes. (The self-parody that was built into the Hollywood swashbucklers like the Errol Flynn movies and, later, swordfight epics like "Scaramouche" wasn't a Hollywood invention; it came directly from the source.)

Why then has no one ever managed to get it right? Partly it's that you have to cut the story down to fit a two-hour movie, and part of the pleasure of Dumas is that he's giving you a luxuriant reading experience. (Richard Lester tried to solve that problem with his two-part version in the '70s, but his sour wit curdled everything.) It's much better suited to a TV serial, which would give you time to live and breathe with the characters. But TV doesn't offer the visual or emotional sweep you associate with the tale. Adapting "The Three Musketeers" remains a pickle.

But God, couldn't they do better than this? This bastardization of Dumas pitches itself to the youth market, not in itself a bad thing. D'Artagnan is often the focus of the book, and yes, he's young and dashing and handsome and callow. He isn't, however, an anonymous pretty boy, which is exactly what Justin Chambers, cast here in the role, is. Going to the movies you get used to seeing pretty and untalented people. But every once in a while a performer's utter lack of personality can make you wonder what the casting director could possibly have been thinking; Chambers makes Chris O'Donnell seem like Jack Nicholson. And Chambers has a voice that is among the flattest and least capable of inflection I've ever heard.

He's surrounded by what used to be called an "international cast," meaning a couple of Brits and some performers from the Continent thrown in for seasoning. Tim Roth, in black leather and matching eye patch, plays the scoundrel who killed D'Artagnan's father in another example of the drag-bar villainy with which he is pissing away his career. And, as the powerful baddie he answers to, Stephen Rea appears as Cardinal Richelieu.

I can report that Rea has maintained his perfect record. Nearly 20 years in the movies and he still hasn't moved his facial muscles. (If they ever cast a movie with actors playing Mount Rushmore, this is the guy to call.) Mena Suvari plays D'Artagnan's lady love, and she manages to get some dryness into her line readings, but she needs to get away from playing goggle-eyed and faintly birdlike sweet young things fast. All her performances are starting to look the same. And as the Queen, Catherine Deneuve has nothing to do, but in a movie as visually and imaginatively impoverished as this one, you're grateful that at least you get to look at Catherine Deneuve.

Maybe Hyams thinks that the stilted dialogue and backlot sets are some kind of homage to swashbucklers past. But there isn't a frame of "The Musketeer" that's believable even as a Hollywood re-creation of a fantasy world. It's conventionally picturesque, except in the nighttime and interior scenes, which are dark to the point of glaucoma.

Hyams, who acts as his own cinematographer (talk about the blind leading the blind), is trying to do a swashbuckler as if it were a martial-arts film. In hack terms that means a lot of fast cutting and indistinct movement and no wit or style to speak of. When D'Artagnan and Roth's henchmen were battling aboard a stagecoach, I had no idea how many men he was fighting. And when Hyams does come up with a neat idea, having D'Artagnan, in the midst of a sword fight, balancing on a rolling cask of wine, he ruins the effect by cutting to the stuntman's feet so that we can't take in the beauty of the idea, someone managing to land lightning-fast hits while struggling to keep on his feet.

Someone has also had the notion, in the stagecoach sequence, of lifting the most famous stunt from "Raiders of the Lost Ark" (the one where Indy holds on to the bottom of a moving jeep and works his way forward along the ground). Maybe the filmmakers thought audiences wouldn't remember. Or maybe Hyams thought that the kids he's aiming the movie at would find it hip, as if he could pass plagiarism off as sampling.