Mark Wahlberg stars in a heavy-metal "42nd Street" -- a rags to riches to flannel story. 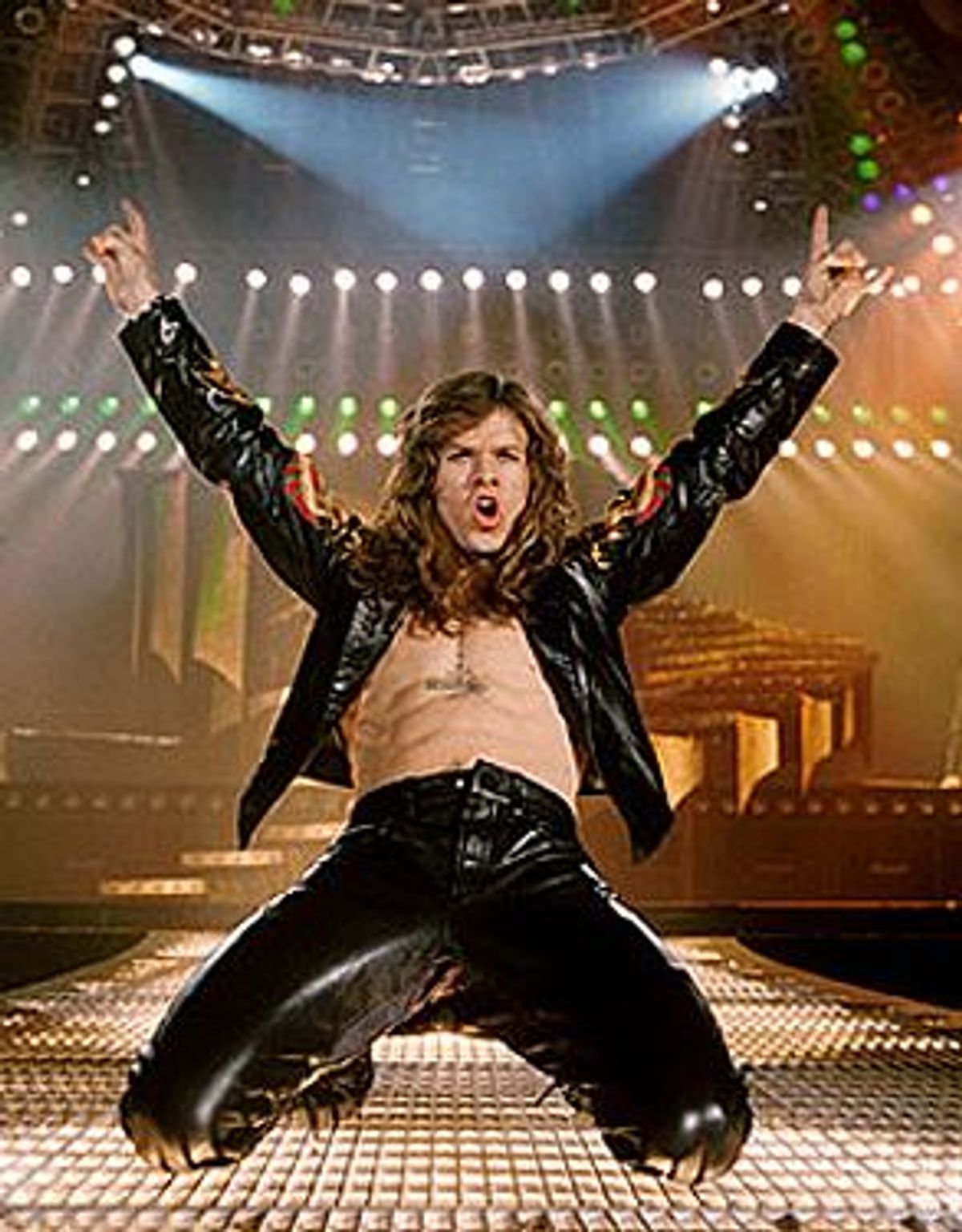 "Rock Star" is so conventional it telegraphs its intentions in the first 20 minutes: By that time you'll be an expert in guessing the next chord in the progression, right up to the coda. This is a rags-to-riches-to-flannel story, beginning with 1980s heavy-metal excess and ending with 1990s post-Nirvana plaid-shirt sincerity. Its spiritual equivalent is the mythical tale of the young small-town starlet, discovered in a coffee shop, who rises to fame only to realize that her roots are really back on the farm.

But a movie doesn't have to be surprising to have an enjoyable sheen. "Rock Star" takes place in an era not long past, and yet for anyone who has kept even half an eye on rock 'n' roll in the past 20 years (let alone 50), it seems like ages ago: in the 1980s, the years of heavy-metal excess. Back then, lovers of "true" rock 'n' roll spent a great deal of time and energy lashing out at head-banger music and its devoted fans, all done up in eyeliner, black lipstick and spandex. It was all posture! It was all bluster! It was mostly worthless! Or so we all said.

But enough time has elapsed, and so many things have happened (Kurt Cobain's taking his own life, for one) that heavy-metal looks different now, and "Rock Star" rides pleasingly on that nostalgia like a pasha on a flying cushion. Chris Cole (Mark Wahlberg) is the front man of Blood Pollution, a cover band specializing in the oeuvre of a megapopular metal band called Steel Dragon. (Chris won't allow people to call Blood Pollution a cover band; he corrects them with a sniff, asserting that it's a tribute band.) To his dismay and that of his longtime girlfriend Emily (Jennifer Aniston), his bandmates give him the boot. The reason? Creative differences. It's a tale as old as creation itself, or at least as old as Bon Jovi.

But Chris' despondence doesn't last long. When Steel Dragon's front man, Bobby Beers -- Chris' idol -- suddenly and mysteriously leaves the band, Chris gets a call out of nowhere: The other members of Steel Dragon want him to try out for Beers' slot. Chris and Emily fly out to L.A., where they are met at the airport by a vampiric dolly named Tania, played by the lusciously named Dagmara Dominczyk. After the requisite jitters and false starts, Chris is welcomed into the band.

And that's, of course, when all the trouble begins. But for its first half at least, "Rock Star" is patently ridiculous fun: In the early scenes, director Stephen Herek ("Bill and Ted's Excellent Adventure," "Mr. Holland's Opus") captures the exhilaration of playing in a rock 'n' roll band, any rock 'n' roll band -- he shows how at its essence, it's the same in small go-nowhere clubs as it is from the stage of an arena.

And Chris' dream-come-true induction into Steel Dragon is played like an adolescent boy's wet dream. But how else do you play an already-archetypal late 20th century fantasy? (The movie was inspired by the true story of a tribute-band singer who was invited to join Judas Priest.) Wahlberg is charming in the way he can't resist grinning from ear to ear in his first promo pics, even though he's all dolled up in tough-guy mascara and motocross leather. His gradual acclimation to the rock 'n' roll lifestyle (yes, Virginia, it does include drink and drugs, televisions thrown out of windows and as many girls -- and people who look like girls -- as you could possibly want) is presented as a comic-strip panel of the fantasies of those millions of kids who ever played air guitar while jumping up and down on the bed in socks and BVDs.

There's no character development in "Rock Star," if you don't count Chris' realization that he really does belong "back on the farm." I suspect many moviegoers will find the movie's simplicity wearying. But its two young leads feel like real people at the center of a storybook script (written by John Stockwell, who recently directed "crazy/beautiful"). I've already heard some people complaining that Wahlberg's character couldn't possibly be tempted by groupies when he's got a girlfriend as beautiful as Aniston. (I'm trying to see if I can interest these people in a patch of swampland I've got in Florida, seeing as they already live in a fairy-tale world when it comes to the nature of sexual attraction.)

Aniston has a fresh, bright, girl-next-door beauty -- I find myself fascinated by the acorn-point of her chin -- but she also has the timing and sass of a '30s comedienne. I'd like to see filmmakers come up with better roles for her. When one of her fellow rock-star wives offers her a swig out of a vodka bottle, she deadpans, "No thanks, I've already had breakfast." What makes the line work is that it's tart and polite at the same time. Aniston doesn't equate sharpness with seen-it-all jadedness -- she knows that they're actually complete opposites -- and that's what makes her character so enjoyable to watch.

Whenever I praise Wahlberg as an actor, I get a flurry of letters telling me that surely I can't be serious. (My sense is that no one wants to believe that anyone who ever called himself Marky Mark could ever be a truly serious actor, a lazy assumption that flies in the face of my cardinal rule that good art can come from anywhere.) But even here, in a role that doesn't ask much of him, I find plenty of evidence that he's among the finest actors of his generation. Wahlberg never overplays, but like Aniston he doesn't get lost in the movie's brazen conventionality, either. He has some terrific scenes with the rotund, grizzly and always-wonderful Timothy Spall, who plays Steel Dragon's cranky spud of a manager. (My favorite Spallism is the way he sends Chris out on the big stage for the first time, croaking, "Up you go!")

Wahlberg's segue from boyish enthusiast to dissipated rocker is smooth and believable, particularly in a scene where he takes a break from some post-show drug and groupie action to speak with Aniston's Emily, who has come backstage to see him. He's groggily tender, but barely able to keep her in focus. Wahlberg doesn't play the moment as an empty daze: You can see that his addled brain is genuinely hard at work, processing her -- taking in her skin, her hair, her voice, the disappointment and hurt in her eyes, but acknowledging them only as discrete pixels and not a complete person. That's a lot to pack into a five-minute scene. I don't know many young actors who could carry it off.

And as for the music itself: Well, I have to say that by and large, heavy metal still isn't very good. And yet somehow, from this vantage point, it sounds better. There's vitality to it, and generous festoons of glamour.

When I fell in love with Nirvana in the early '90s -- a band that took the sonic rush of heavy metal and actually made it sound smart -- I felt relieved at the possibility that heavy metal would no longer rule the rock planet, as it had seemed to for so long. But 10 years later, "Rock Star" showed me that I rather miss the heavy-metal aesthetic, for all its gloss and bombast and ham-fisted wit. No, because of all its gloss and bombast and ham-fisted wit.

In her otherwise pedestrian memoir "Rebel Heart," Bebe Buell, model and sometime girlfriend of rock stars Todd Rundgren, Mick Jagger, Steven Tyler and Elvis Costello, laments the death of glamour in rock 'n' roll: "I don't like all this 'Here's my new flannel shirt.' What's wrong with a little eyeliner? I think glamour is part of what makes rock 'n' roll exciting fun, and if you don't have that, then go back to your day job. I am absolutely bored stiff by bands that look like Guided by Voices. They're about as sexy as an old brown shoe."

She has a point. At the very least, "Rock Star" brings some of that glamour back. The movie is all formula. But then, so is Jack Daniel's.