The crusade against pork

John McCain's moves to cut legislators' pet projects out of the federal budget aren't likely to gain many supporters, despite looming deficits. 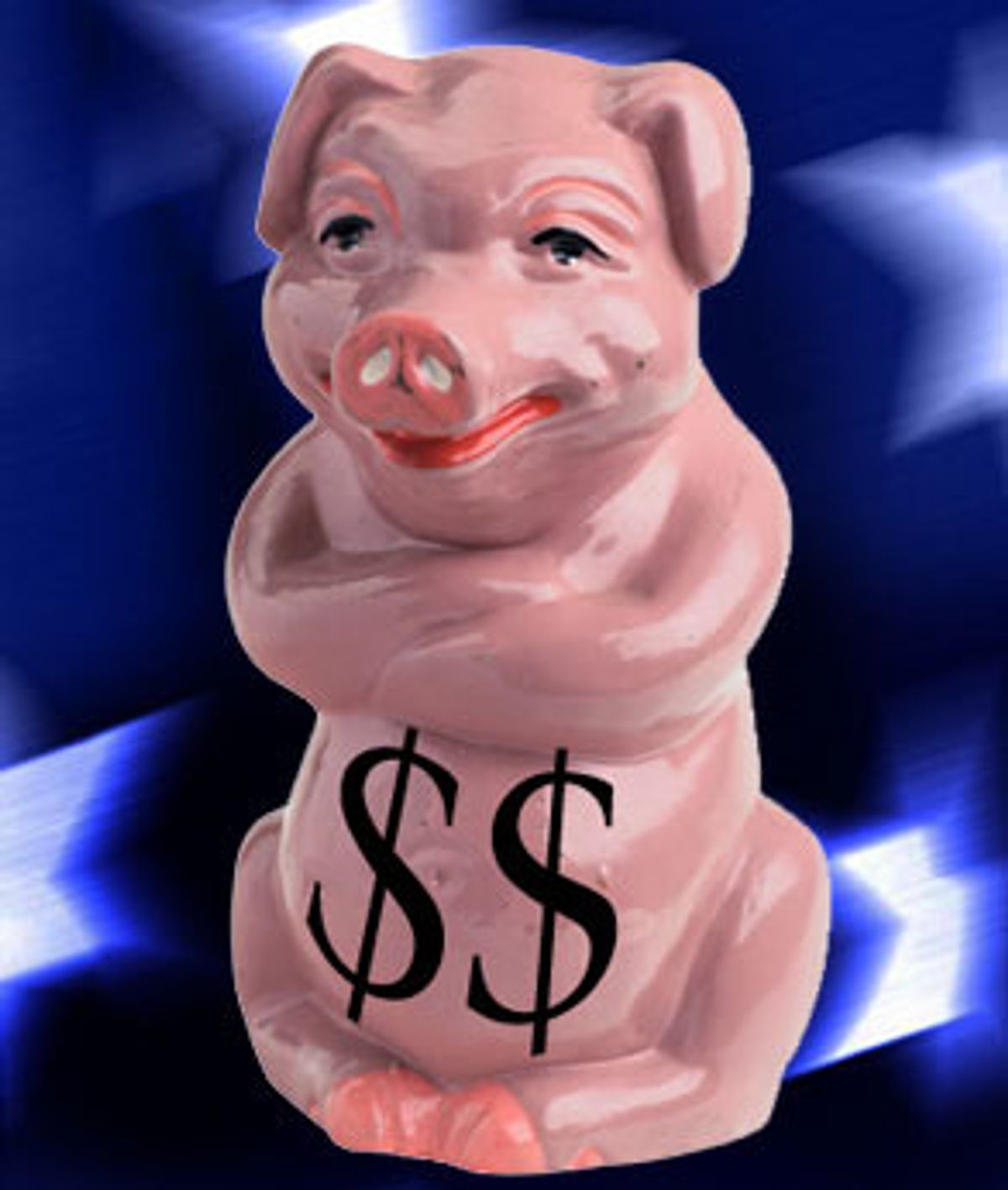 While Sen. Pete Domenici of New Mexico, ranking Republican on the Senate Budget Committee, was arguing Thursday that there's "no reason in the world" why the federal government shouldn't dip into the Social Security surplus to fund other programs, Sen. John McCain, R-Ariz., was preparing an alternative that would allow the Senate to avoid such a move. An alternative he's confident will never be taken seriously.

The appropriations bill to fund the Commerce, State and Justice departments is scheduled to hit the floor of the Senate Monday at noon. So McCain and his staff assembled a list of the "pork" in the bill -- the pet projects of various senators that didn't go through the regular competitive appropriations process, and were instead inserted into the bill behind closed doors by congressional patrons.

In the Commerce, State and Justice Appropriations bill, McCain and his staff had located about $2 billion worth of these projects.

"Obviously the dynamics have changed rather dramatically," McCain says of the current budget crunch. "And I'm going to keep going after it [pork]." Of both his Democratic and Republican colleagues, McCain says, "They can't go to the American people with clean hands and ask for fiscal discipline if this pork barrel spending continues to lurch out of control. It's gotten far worse than ever."

But he doesn't expect Congress to give him a big thank you come Monday. In fact, as of Friday, he wasn't even sure he was going to offer an amendment to trim the pork from the bill. He's been at this for approximately a decade, and he knows the futility of his anti-pork crusade.

Many examples of pork in next year's bills come at least in part because of Domenici. In fact, in just four appropriations bills -- remember, there are nine more -- the man who has no problem dipping into the Social Security surplus brings home at least $34.75 million worth of bacon specifically in earmarked projects that didn't go through the normal appropriations process. Neither Domenici nor a spokesman could be reached for comment.

For example, in the 2002 Veterans Affairs/Housing and Urban Development Appropriations bill, Domenici earmarked $1 million for infrastructure improvements and for a new multipurpose room and event center for the Dana County Rodeo and Fair.

Indeed, Domenici's pork barrel runneth over. In the four appropriations bills -- VA-HUD, Transportation, Energy and Water Development, and Interior -- one can easily find tens of millions earmarked for New Mexico projects. It's all pretty standard pork: lots of money going to "study" things. There's $1 million to study the development of a desalinization research facility, another million for a joint university study of renewable energy sources, and yet another million to study a corridor between U.S. 64/87, Ports-to-Plains.

Then there's $6 million for the state Army Corps of Engineers, $1 million for the Route 4 Jemez Pueblo Bypass, $1.5 million to "intelligent transportation systems" in Santa Teresa, N.M., $12 million to state bus and bus facility programs, $2 million to Albuquerque light rail, $2.6 in commute grants, $300,000 for the development of an economic development center, $450,000 to improve the Curry County fairgrounds for its state fair, $650,000 to build a veterans memorial in Espanola, N.M., and $4.5 million for various wastewater projects.

Perhaps all those projects would be deemed worthy in flush times, but with the budget surplus all but gone in the face of President Bush's $1.35 trillion tax cut and the economic slowdown, there's an impending budget crisis -- though it's debatable whether the crisis is just political or also fiscal. Two weeks ago, the nonpartisan Congressional Budget Office reported that this year's budget will dip into $9 billion in Social Security surplus funds -- funds Bush and more than 500 members of Congress have vowed in one way or another to keep from funding anything other than Social Security. As of yet, the Bush White House and the congressional GOP haven't acknowledged the chasm between what Bush has said he wants to fund with the surplus, and what he cannot fund since the money no longer exists.

"Are you confident that the money will be there to fund all those priorities?" Bush was asked on Aug. 31.

"Yes, I am, so long as Congress doesn't overspend," Bush said.

The actual numbers will make things tricky for Bush, especially in the long term, when one factors in the cost of the new projects he wants to fund: an estimated $1 trillion to partially privatize Social Security, anywhere from $30 billion to $200 billion for a national missile defense shield, plus billions of new dollars Bush has said he wants to spend on education, children's healthcare, and other defense programs.

"How do we get from here to there?" Senate Majority Leader Tom Daschle, D-S.D., asked reporters Thursday. "How do we live up to the promises made by both parties and by this administration that we would not use Social Security trust funds for anything other than Social Security? I've heard the administration say we've got to control the hog-wild spending in Congress. Well, only two bills have been passed involving resources, and both of those bills were within the request made by the administration, not a dollar more."

That's true, but it's also true that 13 appropriations bills have yet to be passed by Congress, presenting the Hill with an opportunity to either remedy the $9 billion taken this year from the Social Security trust fund, or to exacerbate the problem. Daschle has said that he will keep appropriations within the financial outlines of the Bush budget proposal, but that doesn't mean targeting pork -- just that he won't be any more financially irresponsible than the president is being.

Which is all the Bush administration is asking of Congress. Amy Call, spokeswoman for the administration's Office of Management and Budget, points out that there were 1,600 earmarks in the 1997 budget and 6,400 in this year's. But Bush isn't going to target individual programs, or even to veto a bill with too much pork, she says, as long as the overall spending stays within the budget outlines Bush has given the Congress.

"What we're going to do is look to see if the earmarks start pushing up the top line," Call says. "As long as they don't become extremely excessive," there won't be a problem.

But on Friday Daschle escalated the rhetoric, blaming the sputtering economy at least in part on Bush's budget. "The reason why the economy is continuing to sour, in my view, in part is related to the fact that long-term interest rates have not come down," Daschle said. "In fact, they've gone up. And the reason they've gone up is very simply -- every economist will tell you -- is very simply that they expect this country to be back into the deep deficits that we experienced in the late '80s and early '90s, and that took so much work to turn around. And as long as those long-term interest rates stay high, we have very little chance of bringing about the kind of economic recovery we want."

Confronted with new economic downturn figures on Friday -- unemployment is now at 4.9 percent -- Bush on Friday said the first step toward economic recovery was "having a responsible budget that meets our nation's obligations without affecting Social Security or dipping into Social Security." White House press secretary Ari Fleischer said, "As the president has made clear to Congress, the focus should be on spending."

Republican leaders have been discussing an across-the-board spending cut -- but there's no need for that, say the pork busters. By eliminating pork barrel spending, Congress could "stay within the projected 4 percent increase in spending, and not spend the Social Security trust funds," says Schatz.

"But they don't have enough willpower to do that."

That's why it's a good thing there's no longer a budget surplus, Schatz says. "The general trend is they're adding more projects than last year in a number of these appropriations bills. So if they're talking about the 'sacred' Social Security trust fund amount and they don't want to spend above that level, there's $15-20 billion you could get rid of if you wanted to get rid of this pork." Schatz doesn't seem to think Bush will target any pork specifically, though he says he'd like to see him do so.

Congressional pork busters are all over the map as to whether the new budget paradigm will spur congressional belt-tightening. "I think we have a president -- who knows, we'll have to see because he's new -- that appears to be serious about fiscal constraints," argues Rep. Joel Hefley, R-Colo. whose Web site gives a regular award to the "porker of the week."

And imposing those restraints is key, he says, since Congress will never get serious about spending prudently unless forced to do so. "We do need outside help to get that done. Either the president vetoing or threatening to veto these appropriations bills -- maybe that'd be enough." He doesn't think this is going to be easy going, but this is an opportunity.

On June 29, 2000, Hefley offered an amendment that would strip $200,000 for an International Asparagus Competitiveness grant, a pork-barrel project described by one congressional supporter, Rep. Doc Hastings, R-Wash., as "research into new production, packing and processing systems to ensure the continued international competitiveness of U.S. asparagus producers." Hefley's amendment failed 132-287.

"I'd have a better chance of getting it passed today," he says.

Does McCain think that the budget crunch will force his colleagues to join his crusade to cut pork?

"I've seen no sign of it," he says. Three times this year, McCain has offered amendments to strip pork from bills, and three times the amendments were defeated by an overwhelming, bipartisan margin.

In July, he offered an amendment that would have boosted spending for supplemental defense by taking $847.8 million from pork; the amendment failed 83-16. In August, he offered an amendment that would have helped veterans in claims adjudication by taking $5 million from the $140 million in pork he and his staff found in the appropriations bill for the Veterans Administration and Office of Housing and Urban Development. That failed 69-30.

Just as a lark, in July McCain offered an amendment that would have stripped $2 million earmarked for the rehabilitation of a 56-foot statue of Vulcan, the Roman god of fire, in Birmingham, Ala. That, too, failed, 87-12.

Even those who are with McCain on other do-gooder issues like campaign finance reform -- like Sen. Russ Feingold, D-Wis., or Rep. Christopher Shays, R-Conn., aren't on the pork-busting warpath. McCain says that he's heard it from senator after senator: If they support his efforts, they shouldn't expect even a new stop sign in their district. "There are three parties here, Democrats and Republicans and Appropriators," he says. "And the Appropriators have all the power."

As you might surmise, unlike the way seemingly every Senate Democrat has declared he or she is now a fiscally responsible New Democrat -- including Sen. Hillary Rodham Clinton, D-N.Y. -- there is no movement to embrace the cause of pork-busting. In fact, there's little cohesion among the few pork busters in Congress. McCain and Hefley don't work together at all, for instance. McCain has blasted Hefley for pork barrel spending during Hefley's chairmanship of the House Armed Services' military installations and facilities subcommittee. For his part, Hefley takes a shot at McCain's love affair with the media, sneering that the Arizonan "likes to get a lot of ink."

But do the American people want to hear it? Pork-buster Schatz doesn't think so. "As long as taxpayers and voters keep electing people who promise to bring home the bacon," he complains, "and who make campaign pledges to bring home more spending, this is what you get."