Death of a dwarf

On the Internet nobody knows you're a dog, but everyone knows if you're a drunken, enraged midget. 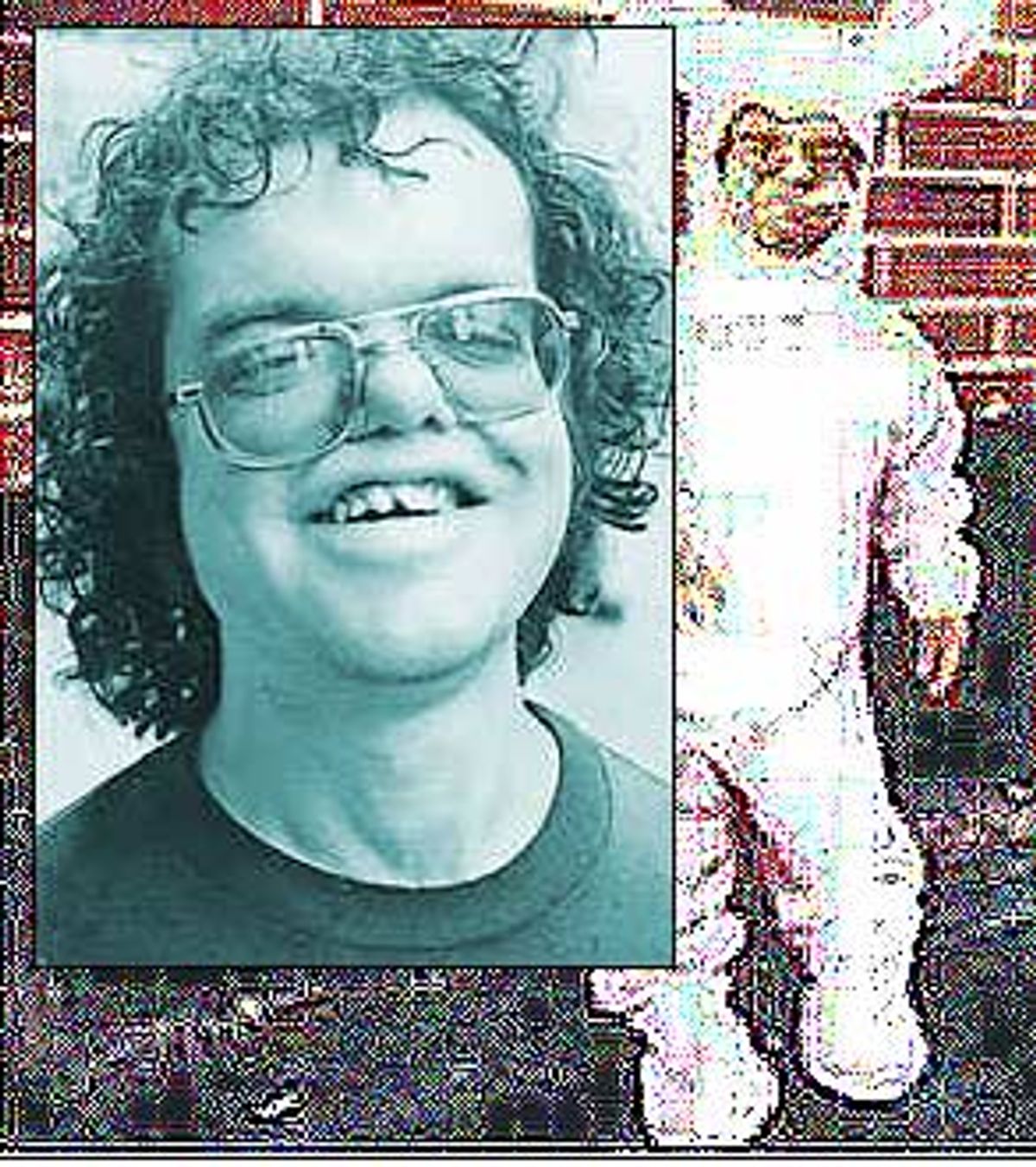 OK, he was no Aaliyah, but when I learned that Hank Nastiff -- a recurring character in the Howard Stern stable of dysfunctional radio personalities -- died last Tuesday, I felt a genuine pang.

For one brief moment, Hank became a bona fide Internet celebrity of sorts, an iconic manifestation of the hive mind at work and a pain in my ass. One minute Hank was throwing up on the sidewalks of Fall River, Mass., where he lived with his mother; the next, he was voted the most beautiful person in the world. That's how fame's 15 minutes of high beams work sometime. Get used to it.

To the netizens mounting the grass-roots campaign on his behalf, a vote for Hank could have been a sly protest against the celebrity culture upon which People magazine had built its readership. Or it could have been just another interactive goof. To those of us at People Online, where I worked as an entertainment editor, the votes for Hank were a crisis in the making -- like the year before when Princess Diana chose the Labor Day holiday weekend to remind the world that no car can sustain a really massive front-end collision and protect lovers in the back seat unless they're wearing their seat belts. For Hank himself, the votes meant a limo with a full bar on future excursions to Howard Stern Central. Previously, Hank confided in one of our late-night calls, he'd been bussing down to the city once a month on the day his SSI check arrived in the mail. But all that was about to change. He hoped.

One of People magazine's most popular issues has always been its annual spring pick of the Fifty Most Beautiful. (No one has ever quite been able to explain why there are 50 beautiful people in the world every year but only 25 intriguing people -- it's like trying to explain how Harry Hamlin could ever have been chosen the Sexiest Man Alive.) It's a tough job but somebody's got to do it, and the beauty buck had stopped that year at the office of Susan Toepfer, the executive editor in charge of special issues. Toepfer started in January with a list of between 300 and 400, culled from nominations made by People staffers in bureaus around the world. The specials staff of about 20 then pared the list down to the magic number. "Hot" and "current" were the criteria. Toepfer's choice for cover boy was Leonardo DiCaprio, fresh off the decks of "Titanic." Readers were presumed to be voting with their wallets at the checkout stand of their local supermarket.

The difficulty in mirroring old media to new media is that the editorial processes can seldom be coordinated. The Internet -- at least in those more innocent days -- was a democratic medium. That meant that readers got an active voice. For three years, People Online had been running its own beauty poll, separate and not at all equal to the magazine's beauty parade. The Net survey had nothing to do with People's cover.

On Friday, April 24, People Online opened its polling to the public. The year before there'd been some unpleasantness between "Xena" and "Hercules" fans who'd duked it out with vote bots and server flooding. Our overworked tech staff had taken special pains to ensure that history would not repeat itself.

But early the following week, Howard Stern got wind of the poll and made an idle suggestion on his popular radio show that listeners ignore the radio buttons for Tom Cruise and Mel Gibson, and instead write in Hank, the Angry, Drunken Dwarf's name. The loyal minions at alt.fan.howard-stern were quick to heed the call. Somewhere along the way, the spark jumped the asphalt and the Beautify Hank campaign was picked up by college students and bored office workers as e-mail chain letters touting Hank's cause swept the Internet like wildfire. Votes poured into People Online's server at the rate of 50 per minute. The mighty machine went down. It came back online a day later, and by the end of the week when the counting was done, Hank the Angry, Drunken Dwarf -- in various permutations of punctuation and spelling -- had tallied well over 230,000 votes: the winner by a mile.

Stephen Silverman, a staff writer with a sense of humor, was set up for a phoner on Howard Stern's show. "So," asked Stern, "are you going to put Hank on the cover?" In fact, the beauty issue had hit the stands days before the online poll commenced. "What a cop-out," Stern sighed and hung up the phone.

Never mind the premium space on the supermarket racks: People Online had its own celebrity machine and that was me.

I called Fall River information and asked for the number of the Nastiff residence. A woman picked up the phone. I identified myself as a representative of People Online and asked to speak to Hank. "Which one?" the woman asked. Hank Jr. was not there. I left my home office number.

A day later, he called me back. "Does this mean that I'm going to be in the magazine?" he asked, his voice filled with shy yearning.

"I'm sorry, it doesn't," I told him gently. "But we are going to put up a Web page about you. I'd like to interview you for that. And we'd like to do an online chat."

The sober Hank turned out to be a pretty good interview. He had a droll, deadpan sense of humor and the true performer's instinct for quick quips. "And, what color are your eyes?" I asked him.

"Do you think you're beautiful?"

"Are you fucking kidding me? I hate the way I look. I have a big head. I have long hair. I haven't washed my hair in a month. Beautiful? It's a fucking joke. But that's OK. I like jokes about fucking."

He'd been diagnosed with achondroplasia (dwarfism) a week after birth and had been drinking heavily since age 14. He'd first met Howard Stern after a night of wild partying in New York when he and some buddies decided to crash the show. He'd stood outside the K-Rock offices at 5:30 in the morning howling until somebody inside took notice.

"Does Howard pay you to appear on the show?"

"Pay me? Nah. I wouldn't want him to pay me. Why should he pay me? I get disability. Sometimes they slip me a little under the table. What do I need money for anyway? People fight to buy me drinks."

The drunken Hank was a different animal altogether -- as I found out a week later when it was time to corral him for his official appearance in the winner's circle, an online chat. Hank was belligerent, incoherent and mostly wanted to know about my underwear.

I hated to disappoint him with the truth. My entire collection of underwear consisted of several dozen pairs of old-lady panties -- you know, the kind you buy at Costco, six for $10 -- and a shabby assortment of bras. The panties all had fraying elastic and had long since forgone any claim to color, so traumatized had they been by their experiences with the spin cycle; and the underwire was poking through so many of the bras that a doctor would have advised me to get a tetanus shot before I put one on.

I was a lingerie deadbeat, so to keep both audiences happy -- Hank on the phone, and his fans in cyberspace -- I grabbed my copy of the Victoria's Secret catalog and began reading Hank descriptions. From time to time, I would slip Hank a question, he would answer with a grunt or a "Fuck you," which I would then expound upon in my own words for the edification of the masses. In their infinite wisdom, the corporate masters at Time Inc. New Media (now a proud division of AOL) did not see fit to keep the transcript of the interview online and I cannot now remember what the fans asked Hank or what I replied in his name. I only remember that when that horrible evening was through, I poured myself a big, stiff Scotch.

People Online quickly moved on to other things. And not long afterward, I moved on to another job. But Hank kept calling. Never sober, usually late at night, he was a polite caller and I think he was trying to understand why his own star had burned so bright but so briefly. There was little I could say to enlighten him.

As I understand it, Hank made some appearances with the WWF and continued his association with the Stern show. And now he's dead, at age 39.

The dancing baby scored a bit part on "Ally McBeal." At last word "I Kiss You" Mahir cut an electronica track and then disappeared. Internet fame has a half-life that can be measured in milliseconds. Celebrity magazines continue to do well on the newsstands.

Patrizia DiLucchio is a writer who lives in Monterey, Calif.