Movies the way God meant them to be seen

What do Fred Astaire's feet, Kirk Douglas' dimple and Willie Wonka's hat have in common? Boneheaded studios and incompetent projectionists are cropping them out of the picture. 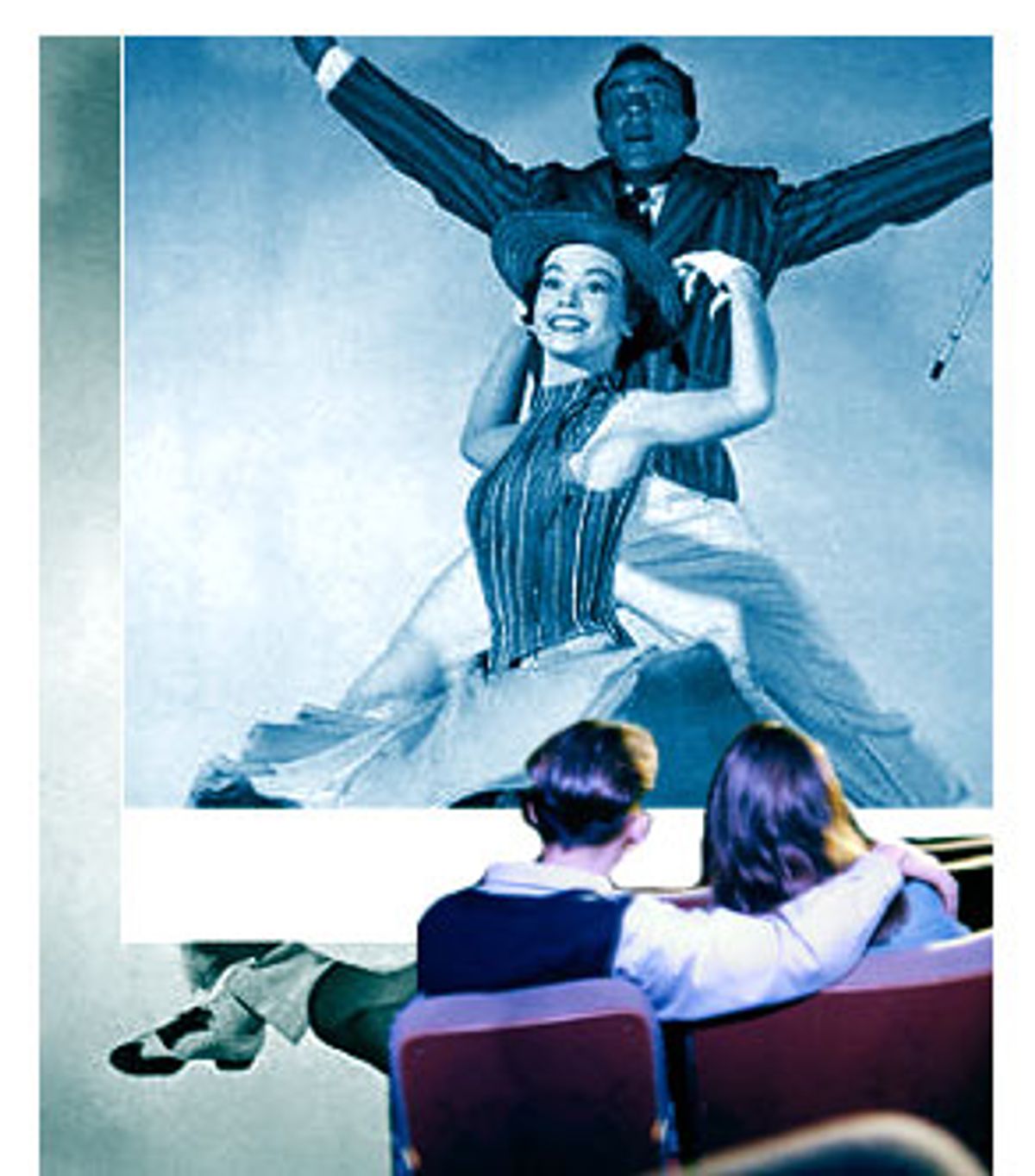 I hold this truth to be self-evident, that all movies deserve to be seen in their original aspect ratios. Four recent events suggest that this truth is not universally evident:

My friend can do whatever he wants. It's his TV. The other three cases are incidents of artistic vandalism. I was dumbstruck by the depredations at the Guggenheim. An art museum would never obscure the top and bottom of a painting. If video art is art, then it must be treated as art, and seen as the artist made it.

Until 1954, the movies lived in prelapsarian bliss. All of them, save a few noble experiments like Abel Gance's three-screen "Napoleon," were shot in the 4:3 ratio, deemed the "Academy ratio" because, originally set as a standard by Thomas Edison, it was so certified by the Academy of Motion Picture Arts and Sciences. Then, as television made inroads into the movie audience, Hollywood fought back with widescreen, wider screen and widest screen. Movies in CinemaScope, VistaVision and other wide-gauge formats went as wide as 2.55:1. Then television started buying the movies and showing them, and that influenced a drawing-in of the sides; most movies began to be shot in the more malleable 1.65:1, with "widescreen" usually meaning about 1.85:1.

When these movies were shown on TV, they were "panned and scanned," which meant the visible area was manipulated to contain as much of the essential action as possible. In the late 1970s, the emerging home video industry adopted panning and scanning. Viewers expected a movie to fill up their whole screen, whether it had been shot in 4:3 or not. This led to strange results; in "The Graduate," when Benjamin stands palpitating with his back to the wall while Mrs. Robinson takes off her nylons, you can see all of him, but only her toe.

The solution was "letterboxing," in which the full width of the film could be shown. But it was only with the rise of laserdiscs in the mid-1980s that letterboxing gained popularity. The wide picture was shown in a band across the middle of the screen, with black masking the top and bottom. In the case of subtitled movies, this provided a splendid black background below the picture for subtitles. Laserdisc users were sophisticates and early adopters. When letterboxing began to infiltrate VHS tapes, however, renters brought them back to the store complaining they were flawed because they didn't fill the whole TV screen. Most video clerks didn't understand letterboxing, and some chains refused to handle the format because of "too many complaints." I personally had the experience of explaining letterboxing to one of the executives of a national video store chain, several years after he should have known what it was.

Laserdiscs never caught on. Fewer than 2 million machines were in service when in the late 1990s the movie industry introduced DVDs, which became the most successful new home electronics product in history. Today some 16 million machines are in use, and because so many DVDs are purchased instead of rented, their dollar volume exceeds VHS tapes at many stores. With the introduction this autumn of recordable and rerecordable DVD machines, the VHS format is doomed.

Most DVD fans insist on letterboxing. Warner's decision to pan and scan "Willy Wonka" in 4:3 ultimately created a firestorm of protest. The studio belatedly announced a widescreen edition. (Families may "prefer a full-frame presentation," but what Warners forgot is that many Wonka fans are no longer kids but have grown up into video purists.) True, letterboxing is an ordeal with a really wide picture on a really small screen. To watch the letterboxed "Lawrence of Arabia" in Panavision (2.20:1) on a 17-inch TV would not be a pretty sight. But screens are growing larger, and two other developments are important.

TV projectors are now so good (and more affordable) that most serious home movie nuts prefer them to big-screen conventional sets. From the point of view of the cost-to-picture size ratio, they are cheaper. New upscale homes include an obligatory "home entertainment center," and if the installer has not specified a widescreen TV and a widescreen-capable projector, he should be locked away with "Lawrence of Arabia" and a 17-inch set until he does.

But there are hazards still ahead. When all TV is in the 16:9 format, will classic 1.33:1 be cropped at the top and bottom to fill the screen? Since there's less real estate to work with, this would be an even greater barbarism than the current forms of widescreen cropping. Humphrey Bogart's hairpieces and Kirk Douglas' dimple would disappear from cinematic memory.

There are precedents for such meddling. In the 1970s, MGM disastrously tried a "widescreen" theatrical release of its crown jewel, "Gone With the Wind." Among the casualties was the full impact of the dramatic "street of wounded men" shot; the cropping cut off the top of the scene and made the street appear shorter. In the 1980s, Disney tried "widescreen" versions of "Snow White and the Seven Dwarfs" and "Pinocchio," but on our TV show Gene Siskel and I did a side-by-side comparison showing how much was being lost, and the studio abandoned the experiment. All rereleased pre-1954 Disney classics are now shown in 4:3, unless the projectionist in a specific theater lacks the wit to provide the correct ratio.

That can be a problem. Many projectionists lack the skill or the equipment to properly frame movies in their original aspect ratios. This problem is more common than you might think. When you see a boom microphone dipping down from the top of the screen, especially more than one in the same picture, the odds are overwhelming that the fault lies not with the filmmakers, but with the projectionist right there in your theater, who is showing the film in the wrong aspect ratio and allowing you to see more than the intended visible picture area.

Many people don't know that movies were not always widescreen. I got an outraged e-mail this week from a reader complaining that the new DVD version of "Citizen Kane" was being cropped, and demanding it be shown in the "original widescreen." It is also true that many people "prefer a full-frame presentation." If they do, it's their TV, and none of our business. But it's essential at this turning point in the video and television industries to insist on the principle of respecting original aspect ratios. Widescreen HDTVs will even make that easier, centering 4:3 images and accommodating widescreen letterboxing (when necessary) with more breathing room and therefore greater height for the picture. As for the home video industry -- all DVDs have two sides, and some studios have already discovered that you can use both of them, with a widescreen image on one side, and a 4:3 image on the other.

As for those philistines who believe a movie is an image that can be molded to their marketing requirements, the proper course is to shame them. I wrote in the Chicago Sun-Times about the HBO decision to use the wrong aspect ratio in Grant Park. To quote myself: "This is one more pathetic example of the dumbing of America -- to show the films in the wrong aspect ratio to placate the stupid, instead of in the right aspect ratio to reward the knowledgeable." "Stupid" was a strong word choice ("uninformed" would have been kinder), but HBO reversed its policy. And I have a feeling the curators at the Bilbao Guggenheim will discover that those Samsung monitors do a sensational job of centering a 4:3 image.