The White House is saying its $300 billion missile defense plan could boost the staggering economy. In fact, it might make things worse. 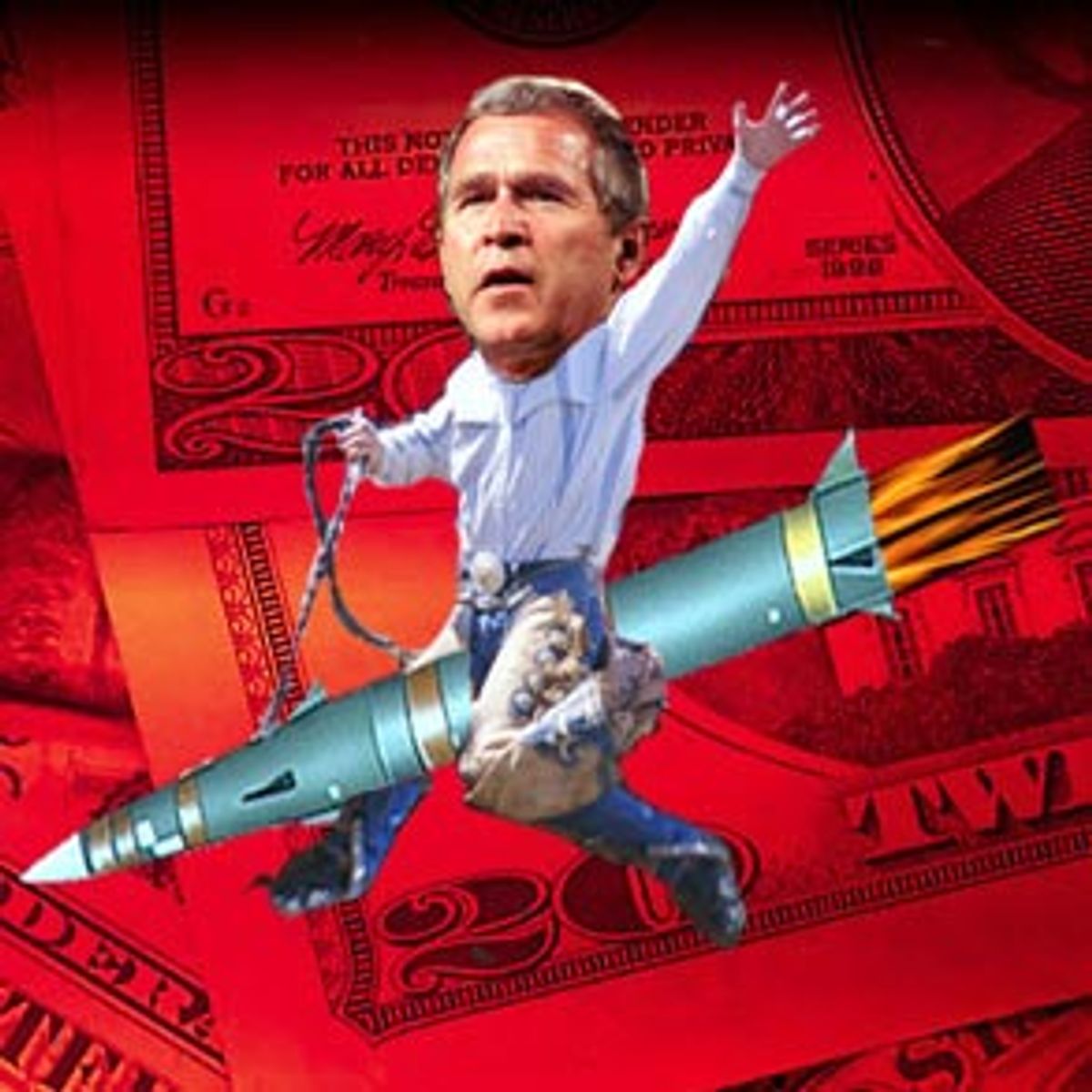 As the budget picture worsens and President Bush is forced to choose between raiding the Social Security "lockbox" and cutting popular spending programs if he wants to keep the Social Security surplus intact, one of his biggest priorities seems untouchable: his pricey and controversial national missile defense (NMD) plan. The Pentagon asked Congress to appropriate $8.3 billion this year for the plan -- an increase of nearly $3 billion over the money earmarked for missile defense in this year's budget -- and Defense Secretary Donald Rumsfeld said the Pentagon needs "every penny."

"If you take $1.3 billion out of some portion of it, it's big," Rumsfeld told the Democratically-controlled subcommittee just before it cut the missile defense funding to $7 billion. "As a percentage, it's enormous, it's very harmful. It moves everything to the right, it delays things, it causes a change in the program that has been put together."

In an interview on Fox News Sunday, Rumsfeld was even more vehement in his defense of the missile plan. "I must say, I have trouble with the idea that defending the people of the United States and our deployed forces overseas and our friends and allies from ballistic missiles, I have trouble understanding why that's a bad idea," Rumsfeld said. "There is a hard core of people who, for whatever reason, are determined to kill missile defense. And I just don't believe that vulnerability of the American people to ballistic missiles is a rational policy. I don't think it is."

Is the Bush administration's passionate commitment to a national missile defense plan on a potential collision course with the economic downturn? Only if Bush decides that reining in deficit spending is more important than jump-starting the economy. That was once Republican orthodoxy (although Reagan paid only lip service to it as he ran up vast deficits), but today, everybody seems to be a Keynesian. A growing chorus of conservatives think Bush can have it both ways -- that building his cherished missile defense system will also pump up the economy. Among those is New York Times columnist William Safire, who argued that a boost in the defense budget is the perfect remedy to the slouching American economy.

"When happy days are here, government should surely slow the growth of spending; when harder times are on the way, the feds should spend more and tax less," Safire wrote in a Monday column. "My plan: Increase federal spending on education and missile defense."

But according to William Hartung, senior fellow at the World Policy Institute, the missile program may not stimulate the economy at all. In fact, Hartung claims that the missile defense project may actually wind up costing jobs instead of creating new ones. He points out that about 70 percent of the Pentagon's proposed $8.3 billion missile defense budget will go to just four companies, and not create many new jobs in the process. And he argues that other military programs, which may have to be cut to pay for NMD, actually spread the pork wider.

"The bulk of the money will go to Boeing, Lockheed, Ratheon and TRW. They've been getting about two-thirds of the missile defense money in the last 2-4 years," Hartung says. "If they start building stuff, which is still a few years off, they'll spread out a little more. But even then, it's not likely to be as big of a broad-based pork barrel program as other military systems. They're just not building that much hardware."

Hartung says that about 80 percent of the money earmarked for NMD research and development will be spent in Southern California, Colorado Springs, Colorado, and Huntsville, Ala., by those four companies. Georgia, Virginia, Ohio, Michigan and Pennsylvania may all lose defense contracts if missile defense is passed at the expense of other defense projects.

And with finite funds in the budget, and a dwindling budget surplus, Hartung thinks that's likely. "They're probably going to cut something if they do decide to fund missile defense entirely," he said. "They may go after some of the fighter programs. The F-22 is built in Georgia and Texas. The new F-18 is in Missouri and Southern California. If they wanted to be political about it, they could go after the F-18 as opposed to fighting their own people in [GOP-favoring] Georgia and Texas. At first, Rumsfeld was willing to try to cut in ways that would hurt a number of different people in different regions, sort of share the pain. But the politics crept back into the process."

Hartung says there is a long list of potential losers if American defense spending is reorganized. "Going ahead with the space-based system means they'll probably cut back on armored vehicles. That means United Defense -- which has plants in Pennsylvania, California, Oklahoma -- would probably take a hit. So would General Dynamics, which has tank stuff in Michigan and Ohio."

Even companies that stand to gain from the missile defense spending might suffer. "The McDonnell-Douglas division of Boeing would lose out if they cut the F-18s. Lockheed Martin and Boeing would take a hit on the F-22, but they would be getting a lot of missile defense programs. If it came down to losing production contracts in exchange for R&D in the short term, they'd rather keep their current programs."

Spokesmen for Boeing and Lockheed Martin did not return calls seeking comment.

Democrats have seized on Hartung's criticism. Last week, in a speech before the Center for Strategic & International Studies at Johns Hopkins University, Democratic Rep. Ike Skelton, D-Mo., ranking Democrat on the House Armed Services Committee and a hawk on defense spending, criticized the administration for its obsession with an untested, exorbitantly expensive missile defense plan. (Just what the final price tag on NMD will be is unknown; estimates range from $200 to $300 billion or more.)

That criticism was echoed Monday by Sen. Joseph Biden, D-Del., chairman of the Senate Foreign Relations Committee, in a speech to the National Press Club. In an interview with the Los Angeles Times before the speech, Biden pointed out that the money tagged for the untested missile defense system could be used to build a new generation of fighter planes and attack helicopters to replace the aging U.S. fleet.

"We could provide our Army, Navy, Air Force and Marines virtually everything they need in the immediate future for about $385 billion -- less than what a missile defense system would cost," Biden said. (The administration's total defense budget request for next year is $329 billion, a $33 billion increase over this year's defense spending.) Not only that, building new fighters, helicopters and other military hardware would mean new jobs, he added.

Biden called the president's missile defense plan "nonsense" and a "cold-war relic" and warned that it might kick-start a new, unnecessary arms race, trashing the Anti-Ballistic Missile treaty along the way. "Before we go raising the starting gun that will begin a new arms race in the world -- before we dip into the Social Security trust fund to satisfy the administration's almost theological allegiance to missile defense at the expense of more earth-bound military and international treaties -- before we watch China build up its nuclear arsenal and see an arms race in Asia and in the subcontinent -- before we squander the best opportunity we've had in a generation to modernize our conventional and nuclear forces, let's look at the real threats we face home and abroad," Biden said. "Let's reengage and rethink and meet our obligations with a strength and resolve that befits our place in this new world."

Biden has scheduled a number of hearings to assess the range of threats to American security, including biological and chemical threats, and so-called loose nukes -- nuclear weapons that may fall into the hands of hostile nations other than the known nuclear powers. Money to battle these more immediate threats would be a better investment, he said.

Not all Democrats are critical of Bush's missile plan. Sen. Daniel Inouye, chairman of the defense subcommittee of the Senate Appropriations Committee, has called for complete funding of the $8.3 billion Rumsfeld and Co. have requested for missile defense.

But during his rounds of the Sunday talk shows, Senate Majority Leader Tom Daschle, D-S.D. said Inouye was in the minority among Democrats. Like Biden, Daschle said he was concerned that full funding could lead to testing that would violate the 30-year old Anti-Ballistic Missile treaty the United States signed with the Soviet Union -- a treaty Bush has said he wants to scrap.

"I don't think that we need all the resources that the president has requested for national missile defense. A lot of it has to do with deployment," Daschle said on ABC's "This Week." "We're not supportive of deployment. We'll continue to fund research, but we aren't willing to violate the ABM Treaty. We're not willing to really sever ties with our allies on this issue. I think we've got to work through it very carefully, and some of it has budgetary ramifications. So, we're going to take a look. We've actually cut the NMD budget right now, and I think it was the right thing to do."

Democrats also point to an obvious irony in the administration's attitude toward science. While Team Bush has demanded rock-solid scientific evidence before taking steps to curb global warming (evidence that most experts say has been present for years), they have been far more cavalier about dumping billions into a missile defense system that many scientists and defense experts say may never work.

"There is really no guarantee that this can work," he said. "There are all sorts of reasons why it may not. They haven't solved the problem with how to deal with decoys -- the lasers lose force as they go through the atmosphere. There are just so many advantages to the attacker, it's hard to see how they could come up with anything that had more than a marginal effect on mutually assured destruction. The argument that this will take the nuclear threat against the United States out of the picture really doesn't match what the technology is able to do. If they were willing to go for deep cuts in nuclear forces then some sort of defensive system might be a useful backup, but not much more than that."