People who were inside and outside the World Trade Center at the time of the terrorist attack describe what they experienced. 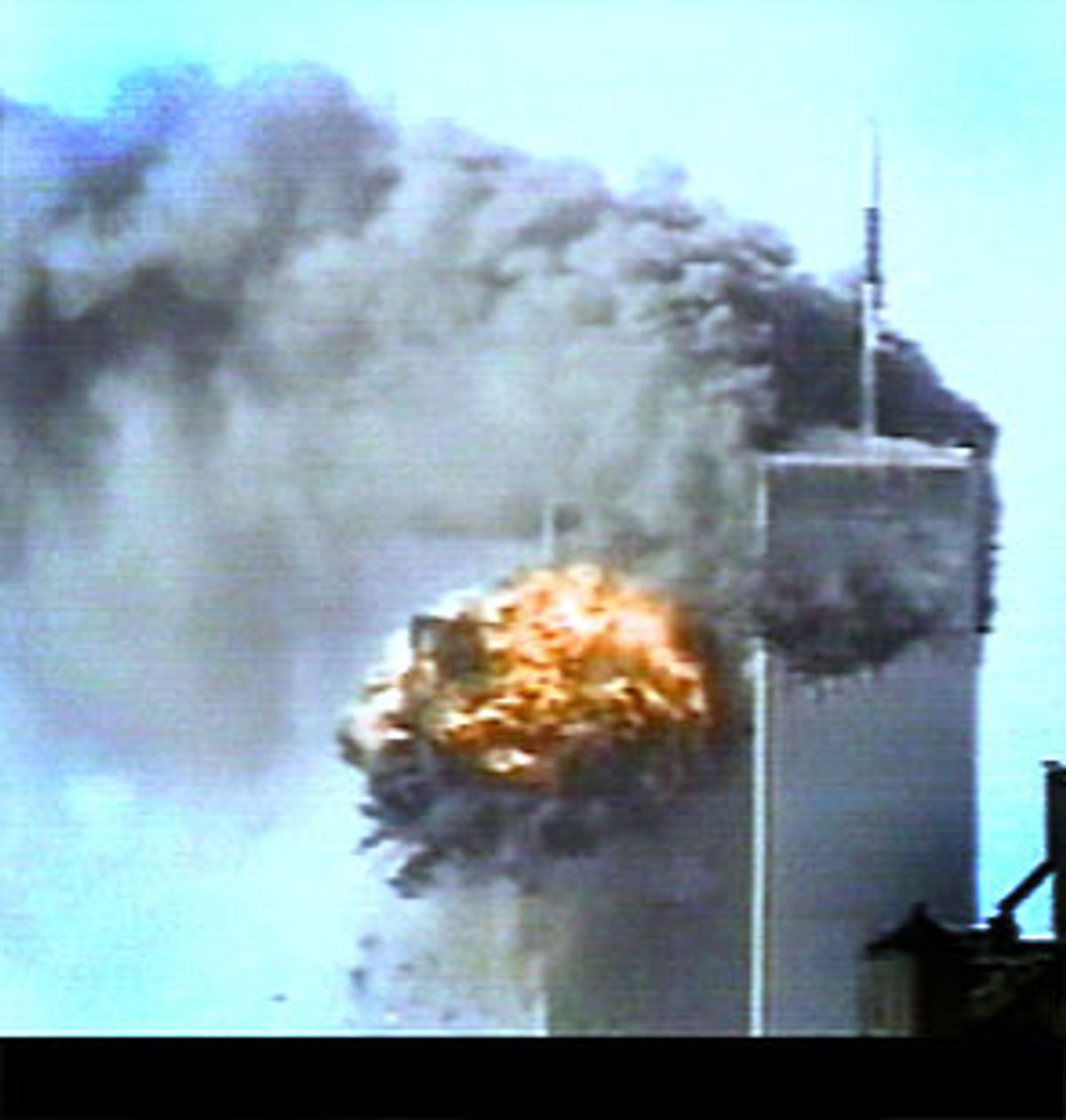 It's Tuesday, Sept. 11, 10:29 a.m. The second building just collapsed. In the sky to the south is a billowing cloud of whitish-gray. I'm on my way to its source. Ten blocks north of the World Trade Center, on Center Street, I meet the stream of people heading north. It's like a war scene. Sirens are going everywhere. People are wearing paper masks. People are weeping. Many people are covered in soot and ash. I stop a tall, dazed man in what was a business suit. He identifies himself as Bo Liljegren, a vice president at Handelsbanken Finans in Sweden. Here's what he tells me:

I was on Chase Plaza. I heard a bang. It started to rain paper from the sky. I saw the [second] plane hit the building, but I thought it was quite safe. I stayed to watch. Suddenly the building was collapsing. Everybody rushed away in panic. I hid behind a power block and everything went black. The air was thick with ash. It was like night. I thought I was going to die. It took half an hour before you could start breathing again. It was horrible. I'm going to try to get back up to midtown and get a flight back to Sweden today, as soon as I can.

Next to Liljegren is a big guy in his 40s in a New York Yankees T-shirt dousing himself with water, also covered in cement. He is shaking. His name is Dennis Trotter. He says:

When the second building collapsed, I was in the center of it. Daylight turned to night. There were two women with me -- they didn't make it. They just couldn't breathe. I tried to help one, but then I started to pass out. I put my head between two parking signs so that I could breathe. It was horrible. Jesus, I peed myself. I don't believe it. At some point, a police officer came in a car and dragged me in. But the two women, they didn't make it."

At Chatham Square, police are trying to stop people getting any nearer the scene. There's still a steady stream of evacuees on foot, and ambulances everywhere. "What was your experience?" I ask two men. "I was watching outside of 120 Broadway. I saw the south tower go down," says Ken Chodock. "The best way I can describe it is it looked like it imploded. I don't know how long it was, it was pitch black. Literally, you could not see. Everybody started running. People were dropping their bags, their phones. People were screaming that they couldn't breathe, from the dust. I went around the corner of 120 Broadway, but it didn't really matter where you were, it was all black. You couldn't open your eyes anyway."

"I was just a block away from the first tower," Father Jim Nieckarz, a Catholic priest, tells me. "We were on our way to the No. 7 tower because people told us that there was a triage center there. We were walking toward the area. All of a sudden the police said, 'Get Out! Get Out! Go north!' We heard the explosion. We couldn't see up, because we were right in front of it. We saw debris literally flying down the two streets on either side of us. We walked right in the middle it."

I pass through the cordon line and approach a huddle of stretchers placed on the ground next to City Hall. A young woman waits nervously: "I'm a volunteer," says Erin Burya. "I ran down from Gramercy Street, up by 20th. I ran and hitchhiked here to help out; because the first wave of bodies will be coming through soon. We've seen a lot of bad people -- people from the 82nd and 84th floors. But the scary part is, we haven't seen enough. Where are the people? Are they dead?" She paused. "Please don't tell me they're all dead."

I make it two blocks farther down Center Street, to Chambers. Here are men in FBI jackets, police squads with heavy firearms. The dust is thick. Out of it walks a man with his daughter on his shoulders, both wearing masks. Others have rags across their mouths. One man is brown and gray from head to toe. This is Lou Lesce:

I was on the 86th floor. The place came down around me. It just filled with smoke, and the whole ceiling fell down. This was No. 1, World Trade Center. There were six of us. We went into an office and sat on the floor. As the smoke increased, we decided to break a window. One of two things could have happened: that the air would rush in, which was fine; or that this would let the smoke in. We broke four windows with a hammer. Fortunately, it gave us air, but it also brought in debris, and flying glass and hot stuff. Then we waited, and were picked up by the Port Authority people, and went down 86 floors. I have to hand it to those people: They stuck by their posts. They were there when everything else was crashing down, personnel comforting one another. And then you'd see the firemen coming up with packs on their backs, weighing 20 or 30 pounds. And they're going up 86 flights! I got separated from the others, because we kept changing stairwells. As one got crowded we'd move on. When I finally got to the mall, I thought it was fine. And all of a sudden, badoom! An explosion, a windstorm of soot. Concrete. I threw myself to the ground, it all went right over my head. Everything went black. And then half an hour later, another explosion. All black. You had to just bear it out, and keep talking and talking, covered in ash. You couldn't even see a flashlight. As for the others, I have no idea. One had my jacket. It was difficult, we couldn't see our way out. I'm going to Bellevue now. I'm just glad to be walking away.

Another man, Edgar Urban, says: "I was standing on Liberty Street. All of a sudden, a plane -- a passenger line -- came out of nowhere right into the building. It looked like slow motion. The plane was coming. It hit the building, and all you see was smoke. I lost it. I ran. Debris was coming down. I ran for cover."

Outside the courthouse at Federal Plaza, an emergency crew was taking a head count. A big man in a gray-blue uniform shook his head:

This is Bill Faulkner, 53, a senior court officer from Green Park in Brooklyn. He continues:

I was standing right here when the first plane went over. I heard it, some of the guys saw it. Major McBain took about 15 of us down. We got in our jury bus and went. Academy instructors went, too. The second plane had already hit when we got there. Everybody was there. Every ambulance you could think of, every agency. We were placed downstairs at the World Trade, getting the people out, moving them toward Broadway as fast as we could, right to the ambulances. And then the building just blew. I don't know what happened. It just blew. I was close, very close. But I jumped behind a pillar. There was debris, glass, windows, everywhere. Then all smoke. We started to walk along holding on to a window. Me, Eddie, one of my officers, a female police officer, a civilian; there were five or six of us walking along that window, holding on to each other. I couldn't see a thing when I got out. I called on my radio. I said, "I don't know where I am." Someone handed me a bottle of water. I washed my eyes and saw that I was on Broadway, where it splits. Thank God for those windows. Thank God for the pillar. Otherwise I'd have never gotten out. Not all of us made it out. Some of us are still missing.

A policeman is washing himself in a burst standpipe. He's NYPD officer Moses Cruz: "I was on Broadway and Lester. I heard a rumbling, looked up, and the first tower came down. I saw this big cloud of smoke, I pulled out people as best I could. The cloud came on us and then I just started to run. I got my mask a lot later, 10 minutes ago. The goal now? Avoid that area."

By 1 p.m., they're stopping people as high up as Canal Street. I'm on my way back in. The cloud has changed color from white to a thick black. I find a way down Church Street, and then Broadway. I reach an emergency triage center set up in a fire station on Reade at Broadway; there are eight or 10 such stations, says Ray, 30, from Manhattan, a volunteer. "Duane Reade has supplied us with masks and water. Now we're waiting for people. Very few people are getting out right now." He tells this story:


The first group of firemen that went in got trapped. Only two made it out. They were here. A whole battalion was lost. I didn't ask which one -- the two guys I treated, I was paying attention to their wounds. One of the two refused to get medical attention. He almost passed out trying to tell us who was in there, who was missing. They'd run, looked back, and the others were only a few yards behind them. We were explaining: "Yeah, but the building is down. They're under there." Only he and his buddy made it out. I sent him to the hospital, his buddy was OK.

At Church and Reade there's nowhere else to go. It's all cordoned off. Dust is welling up into the eyes. It's hard to breath. Ahead, the blinking of fire engines within a dust cloud, white ash, a hot sun. It could almost be the West Bank. The engines are enveloped by the dust cloud. A bus pulls out of the cloud -- it's empty. No casualties on it. Then, a straggling procession of people, maybe 25. I turn to see a woman crouching down by a trash can, clutching her bag to her breast. Her name is Marion Mishkin. She's an attorney. She has this to say:

I'm still in shock from what I saw when I got out [of the subway station]: Everyone looked like statues. They were covered with plaster. Dust, and gray. There were eyeglasses in the street, shoes in the street, papers. There was stationery from the offices blowing in the wind. I saw windows of blown-out buildings. I was walking down blocks that I knew I could look down to see the twin towers. And all I saw was a ghost made of black smoke. Then the sky filled with darkness that I never saw before. It was a wall of dark and wind and acrid debris. Smoke was descending and everyone was shuttled into the building. I was evacuated into a building down there. At that point the second tower blew. We've just been let out. I'm in shock right now. It's a heartbreak. It's almost not real now.

On West Broadway, I'm walking on a bed of ash. Posters for the abandoned Democratic primaries flap in the wind. Flowers, covered in white ash, look as though they were carved from stone. A policeman in a mask stops me. "The gas main might blow. We don't know if there was poisonous gas in those bombs. Get the hell back." I heed his warning and make my way back home.

Roman Milisic, an artist and freelance writer, has written for Brill's Content and the New York Observer. He is the author of "The Beatles in Germany."