A new breed of terrorism

A security expert says it's time for the U.S. to declare war on those who are waging war on America. 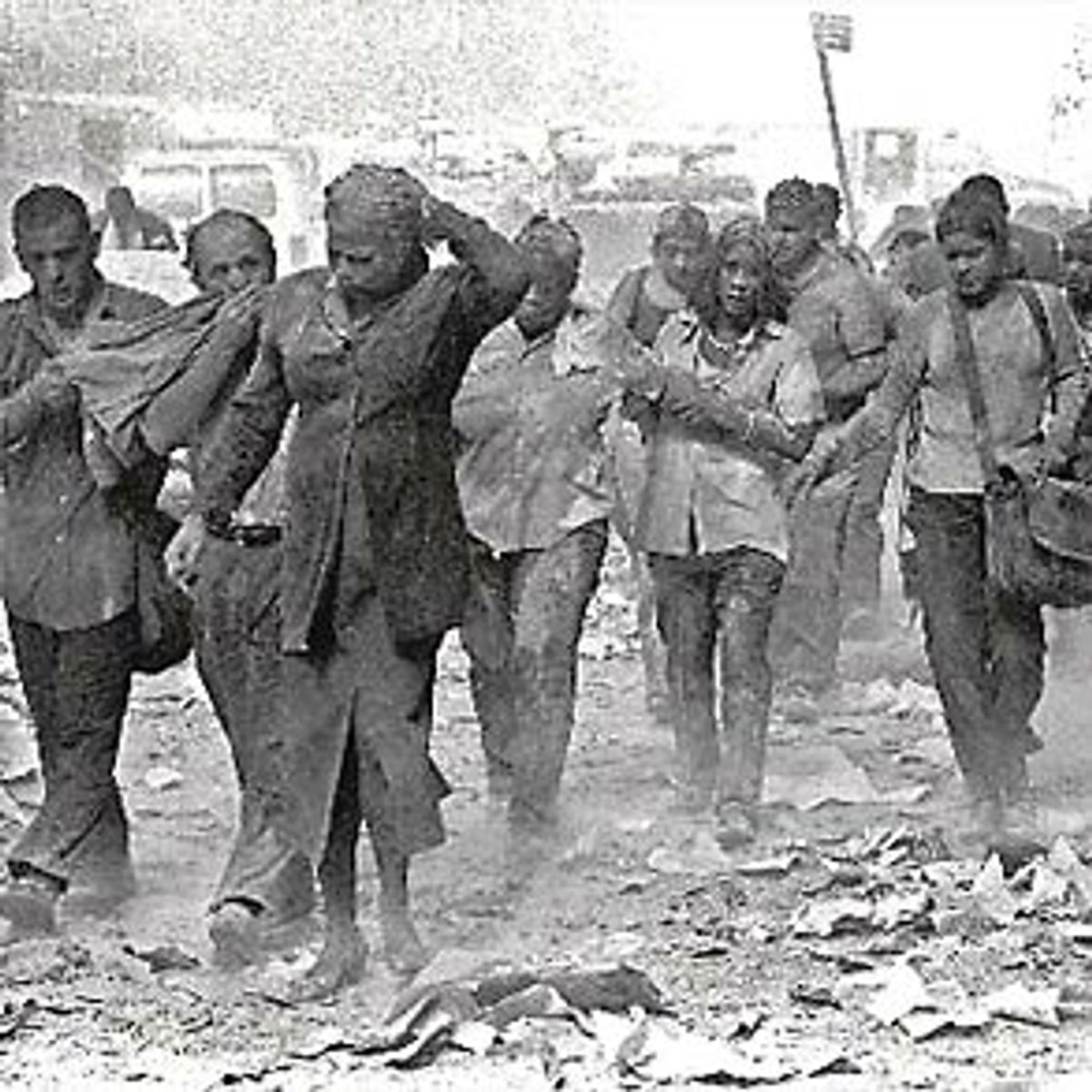 While America reels from the coordinated series of terrorist attacks on Tuesday, many are asking themselves who could commit such acts and why. Salon spoke with Michele Zanini, a graduate fellow at the RAND Corporation and a contributor to the book "Countering the New Terrorism" and the forthcoming "Networks and Netwars," to get some insight on the possible motivations of the still unidentified terrorists.

How are Tuesday's attacks on the U.S. an example of what you and the other contributors to "Countering the New Terrorism" consider a new paradigm?

The basic difference is that the traditional terrorist groups -- for example the Palestinian liberation groups of the '60s, '70s and '80s -- had a way of thinking that characterized their acts. It was that violence was the means to political ends and therefore they had a stake in keeping it within limits. It was an instrument. They had a sense of the need for it to be proportional and to be moderate in exercising it. And of course they wanted to take credit. The point was to persuade someone to do something that you want them to do or to stop doing something you don't want them to do.

You're saying that the old style of terrorists used violence to communicate.

Yes. Their violence was there to hurt people but also to draw attention to their cause. It's more of a symbol. They were showing people how serious they were and that they were willing to make people suffer for it. They understood that going beyond certain boundaries would be counterproductive. It was a means to an end.

How would you characterize the new paradigm?

It's one in which people think they're fighting a war, and it's a war between the strong and the weak. The weaker side is rebelling and it understands that there's no way to defeat the stronger side head on. So it exploits the weaknesses of the stronger side. They do it through terror. They don't want to play on the standard military playing field because they know they'll get their butts kicked. So they resort to terrorism and guerrilla tactics. And they see what they do as strategic. Osama bin Laden sees himself as engaged in a long war with the U.S. that's a sequence of battles and campaigns. The strategic goal is to inflict as much damage as possible.

So although Americans compare this week's attack to Pearl Harbor, and say "This means war," if bin Laden is in fact the person behind it, then he's thinking "We were already at war, and I just scored a major victory."

Bin Laden actually issued a declaration of war against the U.S. in the mid-1990s. For his organization, the larger aim is to liberate the holy sites. Their problem is the U.S. military occupation of the countries of the greater Middle East. They want the Middle East to be free of unbelievers, among other things. And they probably also have an opposition to U.S. hegemony worldwide. They've declared war, and up to this point, they've targeted government assets and infrastructure: U.S. embassies and the destroyer USS Cole. That's U.S. government property, which is what an army would target.

But didn't they bomb the World Trade Center in 1993?

That's not clear. The person involved in running that was an amateur. He was under no direct guidance, and it was very incompetent. He could have blown the towers up if he had placed the van with the explosives in a different way. It would have worked. He had other plans as well, to bomb in Lincoln Tunnel and several other things. What's interesting is that he had a plan to plant bombs in different airlines and have them go off at the same time. He was different, though, more of amateur.

This certainly seems like an expertly executed operation. What do you think of the suggestion that bin Laden might be responsible?

There are reasons to think that. It's an act that conforms with the war paradigm, and it's in line with things he's done before. It's violence used as a way of waging war, in which the proportion is not important -- the more people who die the better. Hamas is the same way. They're fighting a religious war. There's the scope of the attack, the attack on the Pentagon, which is the quintessential military target. And while the World Trade Center isn't a government building, it's a symbol of U.S. economic power and supremacy. They also clearly wanted to maximize damage.

Some other things that tend to point in bin Laden's direction is that he's managed to pull off simultaneous stunts like this before; that's what he did with the embassy bombings. And he has quite an extensive intelligence network. On the other hand, there are others it might be. It might be state-sponsored, though I find that hard to believe. That's a declaration of war, and whatever nation that got caught doing it knows they'd be carpeted with bombs. It's possible, though; these people are not always rational. Another thing is that no one has claimed credit. In the old days, we'd be getting faxed from three or four different groups, each one saying "We did it." But when you're fighting a war, the objective is to inflict casualties. You don't need to say it was you.

But in a war you usually know who your opponent is and what he wants. What does bin Laden ultimately hope to achieve with this?

I read his declaration of war. I believe that they assume that the resolve of the U.S. is weak and that they could force the U.S. to bow out, to withdraw much as the Viet Cong got us to withdraw from Vietnam. Only in very extreme cases is the violence an end in itself, but for them the goal is so big that they just want to do as much damage as they can. It's also important that they do have a religious imperative, what they see as a duty to resist even if it's hopeless. In any case, they think the American commitment is weak and that as soon as people start dying they'll withdraw.

That doesn't seem likely. Instead, people are calling for retaliation.

I'm curious to see how it will turn out. If it's bin Laden who's responsible, I have no idea what they'll do to stop it from happening again that wouldn't be fairly useless. Ronald Reagan bombed the PLO in Tunis in the '80s, but the PLO had a headquarters with filing cabinets and that sort of thing. If the U.S. wanted to take it out, they could. They could drop bombs on Libya and send a message. If it's a state, you invade it or bomb it; it's straightforward. But I think Clinton's reaction to the bombing of the African embassies was not useful. They bombed a few training camps in Afghanistan. And they destroyed them, but that infrastructure is not that valuable. It doesn't cost much to set up camp someplace else.

What makes an organization like bin Laden's so hard to strike at?

It's decentralized and loose. There's no core that you can take out. It's tricky to neutralize them. They use satellite phones, chat rooms, CD-ROMS and the Internet to communicate and coordinate their activities. The technology is something that's new that allows them to be nimble and flexible to pull off these stunts. It's pretty scary. Apocalyptic scenarios have been drawn up in past, but no one believed it would happen. And this surpasses anything that anyone imagined.

The U.S. may even be able to pinpoint where bin Laden is, and they could send in Delta Forces and bring him out, but I don't know how much that's going to help. That works sometimes, but with bin Laden, yes, he's the guy with the money and it would be a loss, but he's not the big man running everything without whom it'll all fall apart. It's a loose network of individuals with the same ideology and the same thirst for blood. If he were taken out, the rest of the network would be in place. It's not clear that you'd dispose of the problem.

What do you and the other contributors to the book suggest as ways to fight this kind of terrorism?

If they have a war paradigm, then probably the U.S. should have one too. If they're fighting a war with us, we should be fighting a war with them. Another thing to remember is that their life blood is their communication flow. If you can find a way to disrupt the ways they disseminate information in a dispersed fashion, it would be hard for them to pull this kind of thing off. The NSA has a project called Trailblazer, and the FBI has Carnivore.

You're talking about surveillance, then?

Yes. Once you know where they are, you can try to compromise their channels, plant misinformation and undermine trust. You compromise the integrity of their network. I understand the objections to this and the controversies over it. I hate Carnivore, too. I would hate to give the government too much power. But if these people are using the Internet for their evil purposes, then something has to be found to prevent them from doing so.

You know, in the intelligence community everyone is afraid of information warfare. But that's not happening because it's really hard. Sure, these groups might try to enlist hackers, but the hacker community has different values and might not want to work for terrorists. But more important, these groups use the Internet themselves for organizational purposes, so they wouldn't want to disable it. They probably planned this attack using e-mail and chat rooms, but at the end of the day, they still blow things up. Because as this tragedy proves, for them, bombing really works. The whole nation has ground to a halt and everyone is paying attention. If all of Wall Street's computers went down for a few days, it would make the newspapers, but not like this.

What sorts of techniques should U.S. intelligence be using?

U.S. intelligence is known for being fairly weak in human intelligence sources, people on the ground who really know what's going on. There's this fascination with high-tech methods, but if you don't have people who can infiltrate these networks of terrorists, you can't head them off. They have to have people inside, who are part of the network. Our catchphrase is "It takes networks to fight networks." The U.S. government is very bureaucratic with each agency protecting its own turf. They have problems with working across agencies and coming up with innovative approaches to fighting terrorism. They're so busy fighting political battles over who should take the lead in the investigation and that sort of thing. U.S. intelligence is notably lousy at interagency efforts. And these guys, these terrorists, move fast. The U.S. is a lumbering giant.

I do think, though, that the U.S. has to think of this as fighting a war. I understand the reservations. It's a slippery slope, but they need to prepare to fight an irregular war.

Right now it seems that the public support would definitely be there.

This hit right at home, for the first time. I'm not from America -- I was born in Italy -- and even I feel angry. I can only imagine how Americans must feel. This is the most traumatic thing.