Despite Bush's calls for tolerance, firebombings, shootings and other acts of violence strike Islamic worshippers. 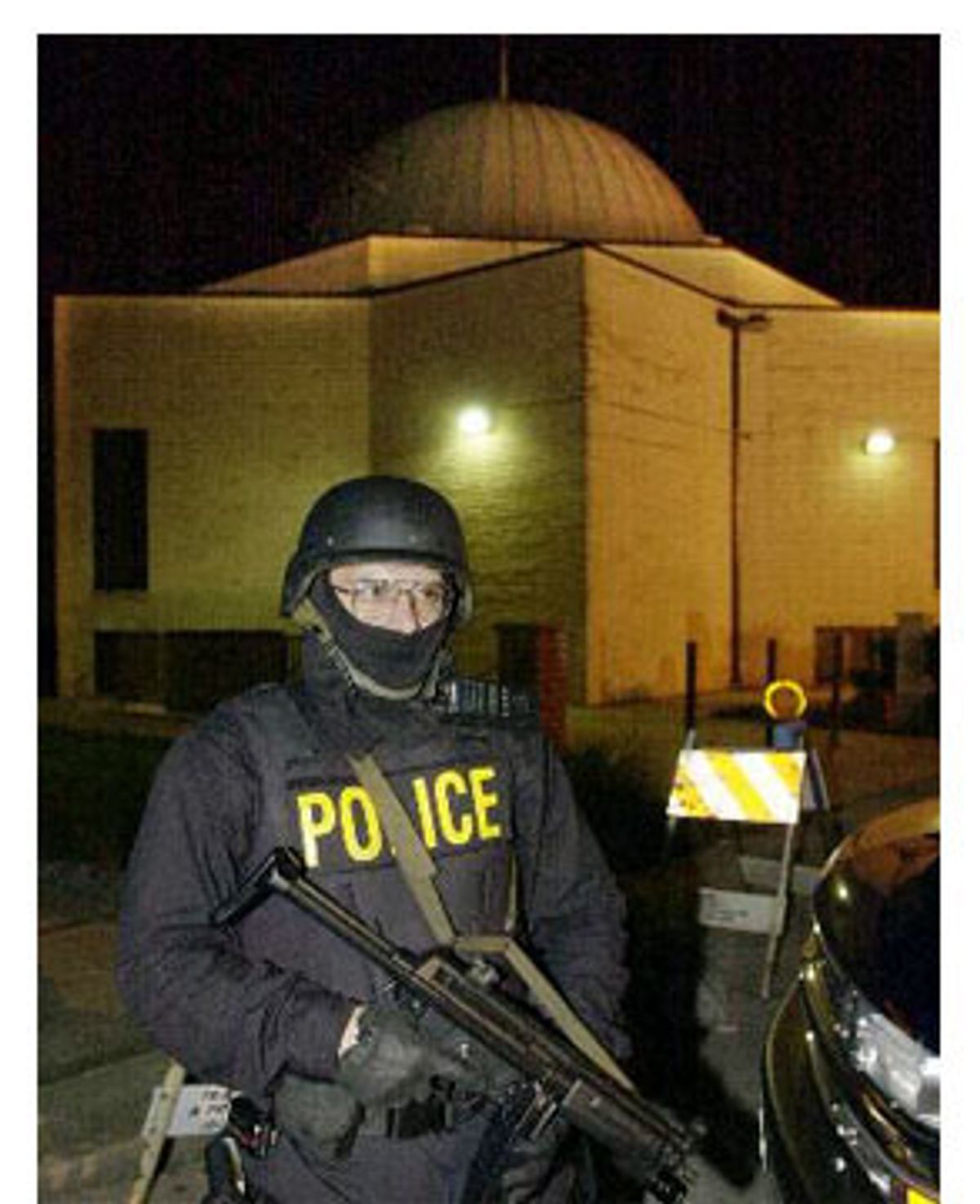 In San Francisco, a bag of blood was thrown at an immigration office that serves Arabs. An anonymous caller told a paralegal that he had left a package "for your brother Osama bin Laden."

In Bridgeview, Ill., outside Chicago, 300 angry Americans marched on a mosque, waving flags and shouting "USA! USA!" before being turned back by police.

In Suffolk County, N.Y., a man who screamed that he was "doing this for my country" tried to run down a Pakistani woman with his car.

In Gary, Ind., a man in a ski mask fired an assault rifle at a gas station worker of Yemeni descent.

Three days after the terror attacks on New York and Washington, the newswires are filled with reports of assaults and harassment against Arab-Americans, Muslims and others who simply look Middle Eastern -- including non-Muslim Sikhs wearing turbans.

Within hours of the destruction of the World Trade Center, the Net was flooded with hysterical anti-Arab sentiment.. It did not take much longer for the attacks on the streets to begin. On Wednesday alone, the American Arab Anti-Discrimination Committee confirmed 30 reports of violent harassment; and wires reported racial incidents as far away as Australia and Canada.

Meanwhile, even as government officials begged for tolerance, conservative pundits stoked the flames of religious hatred. In her syndicated column, Ann Coulter penned these words: "We know who the homicidal maniacs are. They are the ones cheering and dancing right now. We should invade their countries, kill their leaders and convert them to Christianity."

With blame for Tuesday's atrocities falling increasingly on Islamic extremist Osama bin Laden and his accomplices in the Muslim world, and the U.S. military going on a wartime footing, anti-Arab tensions are bound to keep rising. "Obviously people are venting their understandable rage -- rage that we feel also, as there were hundreds of Arabs in the buildings too," said Hussein Ibish, communications director for the American Arab Anti-Discrimination Committee, adding that he's personally received dozens of death threats, including some delivered during live radio interviews. "But some people have misguidedly turned that rage against fellow citizens of Arab descent and Muslim faith. It's a backlash. It's not astonishing, but it's very frightening -- the incidents have been very severe."

Dozens of individual attacks were reported across the country -- cab drivers were pulled from their vehicles and beaten up, office workers threatened on the street, and women in Muslim garb verbally harassed. A mosque in Denton, Texas, sustained thousands of dollars of damage after an unknown assailant pitched a Molotov cocktail at the building. Another firebomb exploded at an Arab-American community center in Chicago. In Irving, Texas, six shots were fired into a window of the Islamic Center. Bricks were thrown through the windows of Arabic bookstores in several locations; and Muslim businesses in Maryland were the targets of suspicious fires.

All across the country, mosques, Arab and Muslim organizations received bomb threats; many now require police protection. The American Civil Liberties Union, concerned about racial profiling, has set up a phone line for Arab-Americans to report any civil liberties violations.

Meanwhile, Arab Americans stayed home in droves. According to Ibrahim Hooper of the Council on American-Islamic Relations, many Muslims have opted to not wear traditional garments like purdah, and many Muslim women are staying in their homes. Many mosques have canceled their obligatory Friday prayers; a move which Hooper called "unprecedented."

As the attacks escalated, government officials tried to curb anti-Arab American passions. President Bush, in a televised phone conversation with New York Mayor Rudy Giuliani and New York Gov. George Pataki on Thursday said, "Our nation must be mindful that there are thousands of Arab-Americans in New York City who love the American flag as much as you and I do." And in his Thursday press conference Attorney General John Ashcroft made a similar plea: "We must not descend to the level of those who perpetrated Tuesday's violence by targeting individuals based on their race, their religion, or their national origin. Such reports of violence and threats are in direct opposition to the very principles and laws of the United States and will not be tolerated."

"There's a counter-backlash going on, with public officials making statements; we're very glad they've been doing so," said Ibish. "They all deserve praise for having urged the country in its time of anguish and grief and rage, to remain a tolerant, compassionate society.

But official calls for tolerance failed to sway some popular media personalities. Radio host Howard Stern, for example, filled his show on Wednesday with jokes about "rag heads." This type of bigotry was also on glaring display on the Internet. Online bulletin boards were filled with anti-Arab venom. "If you see any of these (Arab) piss-ant's from now on, lets strip off their head-wear, men and women and spit on their faces. They should leave this country. Now," wrote one poster on the normally liberal Craig's List bulletin board. At the conservative Free Republic, a poster demanded that the United States "revoke the green cards and student visas of all residents of middle-eastern countries immediately."

Not everyone online is jumping on the mad vengeance bandwagon. "We must remember that we are all Americans, that our country was founded upon freedom and the rights of people to seek liberty and happiness," wrote a reader named Danita O'Neill to Salon. "The majority of Muslims in this country are here because they were run out of Saudi Arabia and other suppressed countries for their beliefs in justice and humanity and equal treatment for all."

Other online sites have been flooded with posts calling for peace and understanding and the racist responses are being compared to the anti-Japanese sentiment that erupted in the wake of Pearl Harbor, leading to the internment of thousands of Japanese-Americans during World War II.

"There's a struggle between two Americas -- the America of rage and blind fury that is lashing out against Muslims, and the compassionate America," said Ibish, who pointed out that the American Arab Anti-Discrimination Committee has received more supportive calls than threatening ones.. "I'm glad to say the better angels of our nature are winning right now. Once people get the message that you can't blame people because of religion or ethnicity we'll be able to direct our anger at those who are to blame for this tragedy."