Running against the grain: A survivor's tale

He was 17 floors from the tower's top just minutes before the jet hit. Luck and his contrary nature got him and two friends out alive. 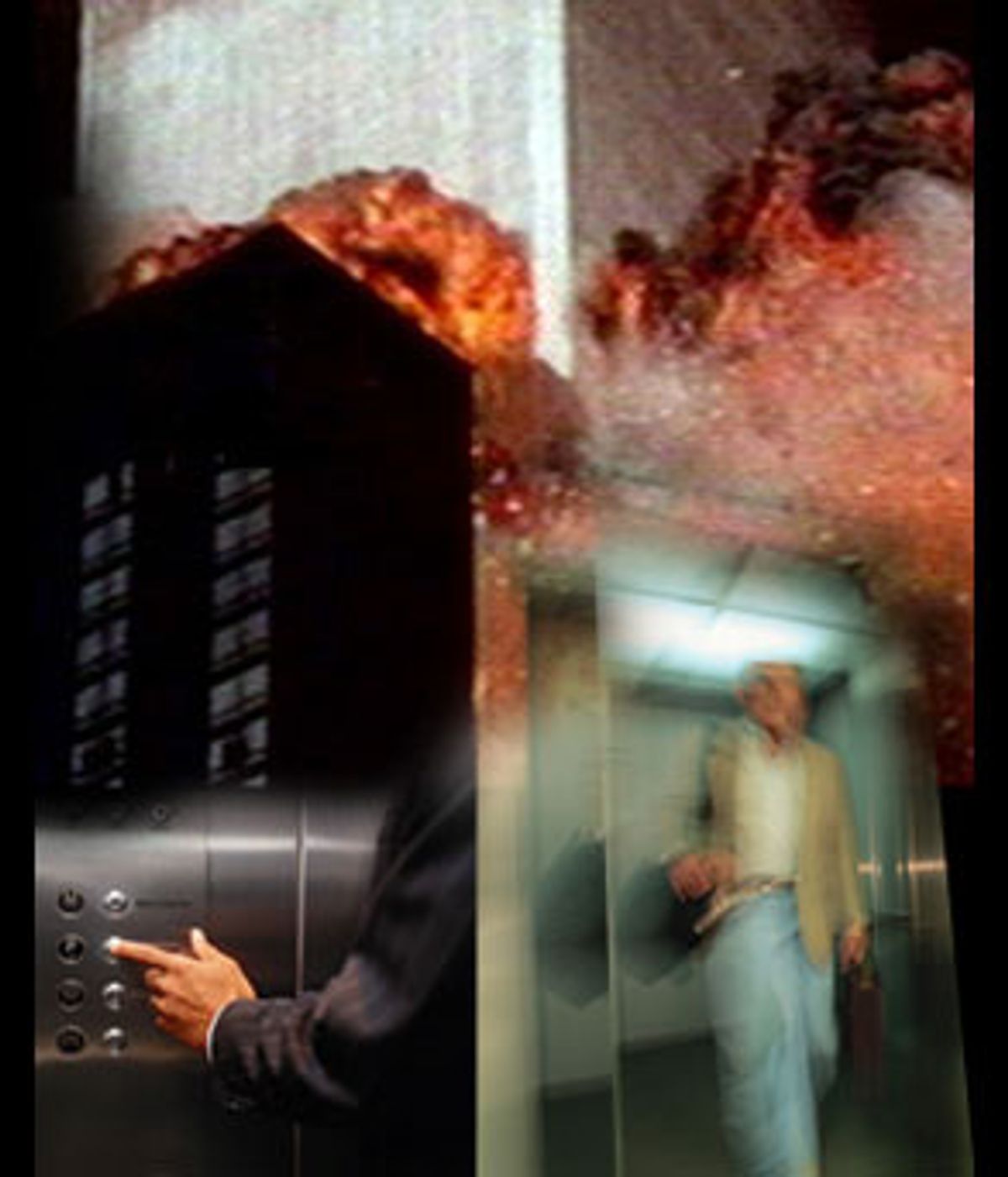 At the time the first airplane strikes Tower 1 of the World Trade Center, David Boyle is working on the 93rd floor of Tower 2, for a Cupertino, Calif.-based start-up called Oblix. David doesn't hear the impact, but sees thousands of white papers fluttering in the air, traveling in a northeasterly direction outside his window. "At first," David tells me later, "I thought, Maybe this is a ticker tape parade." People in the office are milling around, drinking coffee, perplexed, but not particularly concerned. David wanders from window to window looking for the source of the paper. His windows look out on the Brookyn Bridge, away from Tower 1. He notices the papers are substantially larger than confetti. Looking down on the streets, he sees debris covering the ground. "Then it finally hits me. This is not a ticker tape parade."

David suggests to his two colleagues in the Oblix offices that they start walking down the stairs, though some around them continue to work. David throws his laptop into a bag and the bag over his shoulder.

It takes them 10 minutes to reach the 78th floor. During the walk, David's mind starts working on him. What could cause all that debris? It has to be worse than anyone knows. He has to get out of the building, by the fastest means possible. At the 78th floor, they reach a bank of elevators that can take them directly to the lobby. A man's voice on a loudspeaker informs workers that there has been an "accident" at Tower 1, but it is completely contained. They should stay calm and remain in their offices. David's boss, Carlos Delatorre, checks the voice mail on his cellphone and suggests they all go back upstairs. "I don't want to waste the morning," Delatorre says. David protests, "Listen, do the math. If it's nothing we're back up here in five minutes. If it's something then we're safe."

David looks at his watch. He calculates that it will take at least an hour to inch down to the ground in the already crowded stairwells. He hits the elevator button. Doors open. People in the lobby around him shake their heads. David doesn't have time to explain: If the "accident" really is contained to Tower 1, he figures, the elevators should be fully functional. He and his colleagues (Michael Black, an Oblix systems engineer, in addition to Delatorre) get in with several others. Though they don't know it, a jetliner headed their way is about 60 seconds from impact as their elevator hovers on the 78th floor. A friend turns down David's request to accompany them. She wants to stay behind to watch over people. "I said, 'Well, good luck to you.' She's like, 'Good luck to you.' That's the last time I saw her. I remember all these faces looking at me as the half-empty elevator closed its doors on them."

The high-speed elevator whisks them to the lobby in less than 30 seconds. David follows a disorganized group of people out some sliding doors. "Immediately outside, I started hearing this roar. It was getting louder and louder. I have a friend and we used to take his boat out into the Boston Harbor and park it at the foot of the Boston-Logan Airport. I knew it was a jet engine." David's view of the sky is blocked by an awning. As he walks clear of the awning, he looks up, just as the plane hits the building that he's just exited. The next sound dwarfs the sound of the engine. "It was like the world coming to an end."

Pandemonium breaks out. While people around him run for the street to get clear of the building, college football instincts kick in; David and his colleagues run back inside, against the flow of bodies. "It's called running against the grain," he says. He dives over a turnstyle headfirst, hands out. As he lands massive debris falls on the streets, where many of the people fled: steel girders, aluminum and flames. He runs into the center of the towers where the retail stores are located. "It's amazing what happens when you're that afraid. I didn't stop to see anything. It was like running wind sprints. Don't talk. O.K., go left, go left. Just run, run, run." He runs until he hurts, until he wants to throw up. Amid the confusion, David loses Carlos. He and Michael plunge into a subway station, where a train is waiting with open doors. They jump in. It's packed. The train pulls away. "What is happening, what is happening," people around him want to know. David tells them, "We are under attack."

Back at his apartment, 11 blocks north of the World Trade Center, at Leonard and Church streets, David looks at the smoldering buildings. As he watches, the first tower starts to collapse, killing, presumably, many of his former office mates. He can't quite register what he's seeing. Even as the building comes down, he turns his head to the left and watches the scene unfold simultaneously on the television, as if to verify his own impressions. The phone rings. From where he's running to safety along the West End Highway, Carlos calls David on his cellphone and thanks him for saving his life. David calls his family. Over the next 48 hours, scores of friends call David, many in sheer panic. He listens to their voice mails and eventually changes his outgoing message to tell people he's alive. "It's almost like you're attending your own funeral," David says. "It's touching. Your ex-girlfriend calls who you haven't talked to in five years and she calls you 'Baby,' which she hasn't done in five years."

His roommate comes in, hugs him with tears in his eyes, astonished to find him alive. Down on the street, earlier, David's roomate met a dazed and bleeding man. What happened? The man told him he was waiting for an elevator in Tower 2. When the explosion hit, the elevator doors blew inward on the waiting crowds, instantly decapitating people and cutting them to bits. He was lucky that bodies in front of him absorbed that first shock. He hurled himself down the stairs. David's roommate told the man his friend worked on the 93rd floor. "He's dead," the man said flatly. Right then, one of the towers collapsed and David's roommate didn't wait to finish the conversation.

When I finally spoke with David the day after the attacks, I wanted to tell him that somehow I knew, when I learned he'd been working on the 93rd floor, that he would have an extraordinary story to tell. That is, as long as he survived to convey it to us. David's parents raised all their four boys with a combination of Italian-Irish bravado that inclines them to think against the grain. It makes them great, if irascible, dinner companions and forceful leaders. I wasn't surprised to hear that somehow David had defied logic and taken an elevator, tried to encourage others to accompany him, talked his boss out of returning to work and, finally, leaped back into a building when others fled the front door.

But I didn't. When I finally got David on the phone, I could hear in his voice that his experience is bigger and more searing than anything I might make of it. Inevitably, perhaps, we found ourselves debating the nature and will of God. "The final result is that things lined up in my favor," he told me. "I personally believe God doesn't interfere. If that were the case, I might have more trouble handling this."

Ann Marsh is a writer in Los Angeles.