When the Rev. Jerry Falwell blamed the ACLU and other liberals for Tuesday's attack, he proved he's America's answer to the Taliban. But that doesn't mean there's no place for God in our expressions of national mourning. 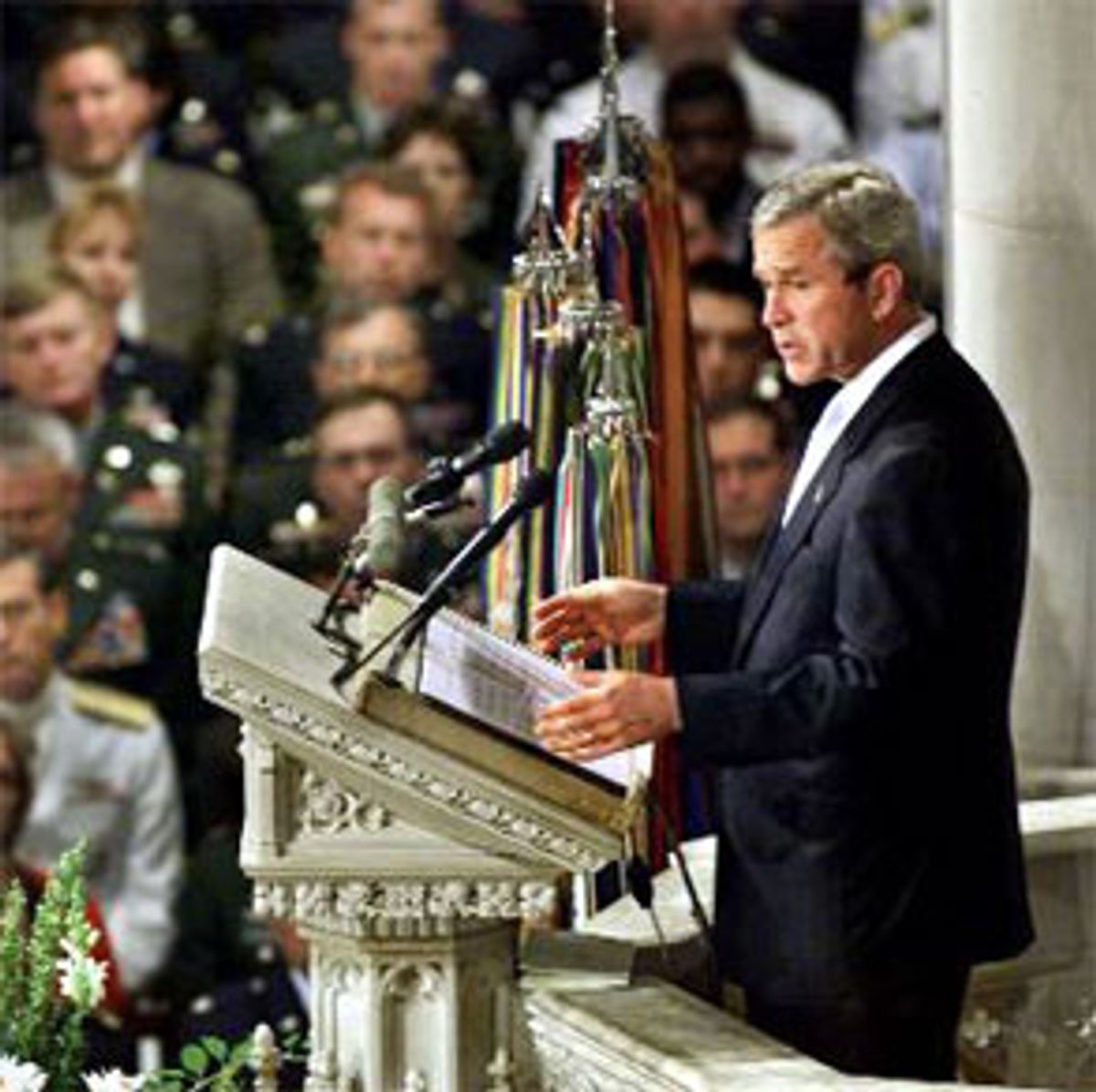 I stopped into a church this morning to say a prayer. It's the National Day of Prayer and Remembrance for the victims of Tuesday's attack, but I do that every once in a while anyway, when I'm sad or stressed or need a quiet place to think. In my urban, intellectual, San Francisco cynical mini-culture, that makes me a bit of a weirdo. But my mini-culture excels at tolerance, so nobody makes me feel bad about my faith.

Thus I found Friday's rituals to mourn those who died in Tuesday's horrific attack a great comfort -- and again, in my world, that made me unusual too. A lot of atheists, agnostics and secular humanists were uncomfortable with the day's religious tenor, and watching a broadcast of the service at Washington's National Cathedral, even I found myself asking: Should there be so much God in these public expressions of loss and remembrance? Should a secular country gather its political leaders in the National Cathedral to pray?

As if to make it easy to answer a resounding no, Friday also brought the news that the Rev. Jerry Falwell and 700 Club host Pat Robertson are blaming the ACLU, gays and feminists for the World Trade Center attack.

"God continues to lift the curtain and allow the enemies of America to give us probably what we deserve," Falwell told Robertson on the 700 Club Wednesday, according to the Washington Post. "Jerry, that's my feeling," Robertson responded. Falwell went on to blame the ACLU and federal courts for "throwing God out of the public square." He continued:

"The abortionists have got to bear some burden for this because God will not be mocked. And when we destroy 40 million little innocent babies, we make God mad. I really believe that the pagans, and the abortionists, and the feminists, and the gays and the lesbians who are actively trying to make that an alternative lifestyle, the ACLU, People for the American Way -- all of them who have tried to secularize America -- I point the finger in their face and say, 'You helped this happen.'"

This came on the heels of a vicious column by conservative hatchet-gal Ann Coulter, who wrote earlier this week: "We know who the homicidal maniacs are. They are the ones cheering and dancing right now. We should invade their countries, kill their leaders and convert them to Christianity."

If I believed in a God of vengeance (I don't), I'd pray for him or her to smite Coulter, Robertson and Falwell, smite them with mercy but smite them nonetheless: hemorrhoids, maybe, for the portly Christian gentlemen; a year of bad hair days for the nasty blond Coulter. (A friend asks, "Does she talk to Jesus with that mouth?") But in the end they'll punish themselves. Falwell and Robertson have to live with their own idiocy: By their twisted logic, the terrorists were agents of God, and thus we should welcome their vengeance. Coulter has to live with her own meanness.

But they're a little scary nonetheless. They are America's counterpart to the Taliban, and let's be clear: If they had their way, this would be a Christian state. They'd make common cause with the Taliban to strip women of many rights, persecute gays and punish godless infidels. The only silver lining of this tragedy is that it's bringing out the invidious agenda of the Christian right, where it can be repudiated; President Bush should be asked to disassociate himself from their abominable remarks when the immediate crisis has passed.

And yet that doesn't mean, as I've heard some argue, that we should have kept God out of Friday's rituals because -- from the Taliban to the World Trade Center terrorists to the hideous Falwell and Coulter -- it's reverence for God that got us into this mess. The left especially has always been uncomfortable with the fact that roughly 95 percent of Americans, in poll after poll, say they believe in God, and the vast majority attend regular religious services.

Of course that majority mostly carries the day: Yes, we banned prayer in schools, but we regularly feature blessings and invocations at meetings of Congress and other government bodies; and early in his term Bush declared a National Day of Prayer for no particular reason at all. Despite Falwell's blathering, believers are in no danger of becoming a persecuted minority in the U.S.; if God indeed punished us on Tuesday, he's a self-hating God, because we must rival Afghanistan when it comes to worshipping him.

But in a moment of searing national anguish, the country's deep religious faith is an asset to be built upon, and criticizing our leaders' use of God in behalf of healing is a sad mistake.

Liberals lament America's excessive individualism and lack of communal ethic, but there is one community that many people have in their lives -- it is centered around a church, synagogue or mosque. Thus I can't think of a better place than National Cathedral, where -- led by rabbis, imams, priests and ministers -- we can come together and share our national grief and trauma. The sound of Arabic when Imam Muzammil H. Siddiqi began to pray, very early in Friday's service, was a little shocking to me and honestly, I'm embarrassed to say, a little painful after having spent the entire morning listening to CNN recite name after Muslim name on the new list of hijackers. But hearing Siddiqi recite a Muslim prayer alongside American religious and political leaders probably did more to reinforce the message that Muslims must not be scapegoated for Tuesday's attack than proclamations by all 535 members of Congress.

President Bush gave the best speech of his life at National Cathedral as well. It was warm and moving and yes, grounded in his faith that God will comfort those who mourn and help make sense of what seems senseless. "God's signs are not always the ones we look for," he said early. "We learn in tragedy that his purposes are not always our own, yet the prayers of private suffering, whether in our homes or in this great cathedral, are known and heard and understood." He talked about God, not Jesus. The religious thoughts may have gone on about a minute too long. But Bush looked calm and secure and reassuring, and finally, presidential.

Sitting there listening to Bush, I knew that to nonbelievers, what he was saying might sound nonsensical, that it might not be comforting; it might even be disturbing. I knew some heard "Jesus" every time he said "God," and that's understandable, given Bush's ties to zealots like Falwell.

Secular humanist that I am -- yes, I'm a believer, but not much of an organized churchgoer, and I believe just as deeply in the separation of church and state -- I would feel bad if I knew that Friday's outpouring of religious faith, by Bush or by anyone else, made someone who is suffering now feel worse. I don't want anyone to feel left out of a national ritual of healing. Ideally, I wish Bush could have reached out to nonbelievers, but his own deep faith might have made that seem ham-handed and condescending.

And yet to deny to many the words of religious comfort, on behalf of the comparative few who don't believe in them, feels like a thoughtless minoritarian absolutism. We protect the rights of minorities in this country; of course nobody should have to believe in God to receive public help or services, or to get comfort either. But to keep God entirely out of Friday's service would be like refusing to hold it in English because some Americans don't speak that language.