Send in the online spooks?

In the aftermath of terrorism, civil libertarians are running for cover. But are they protesting too much? 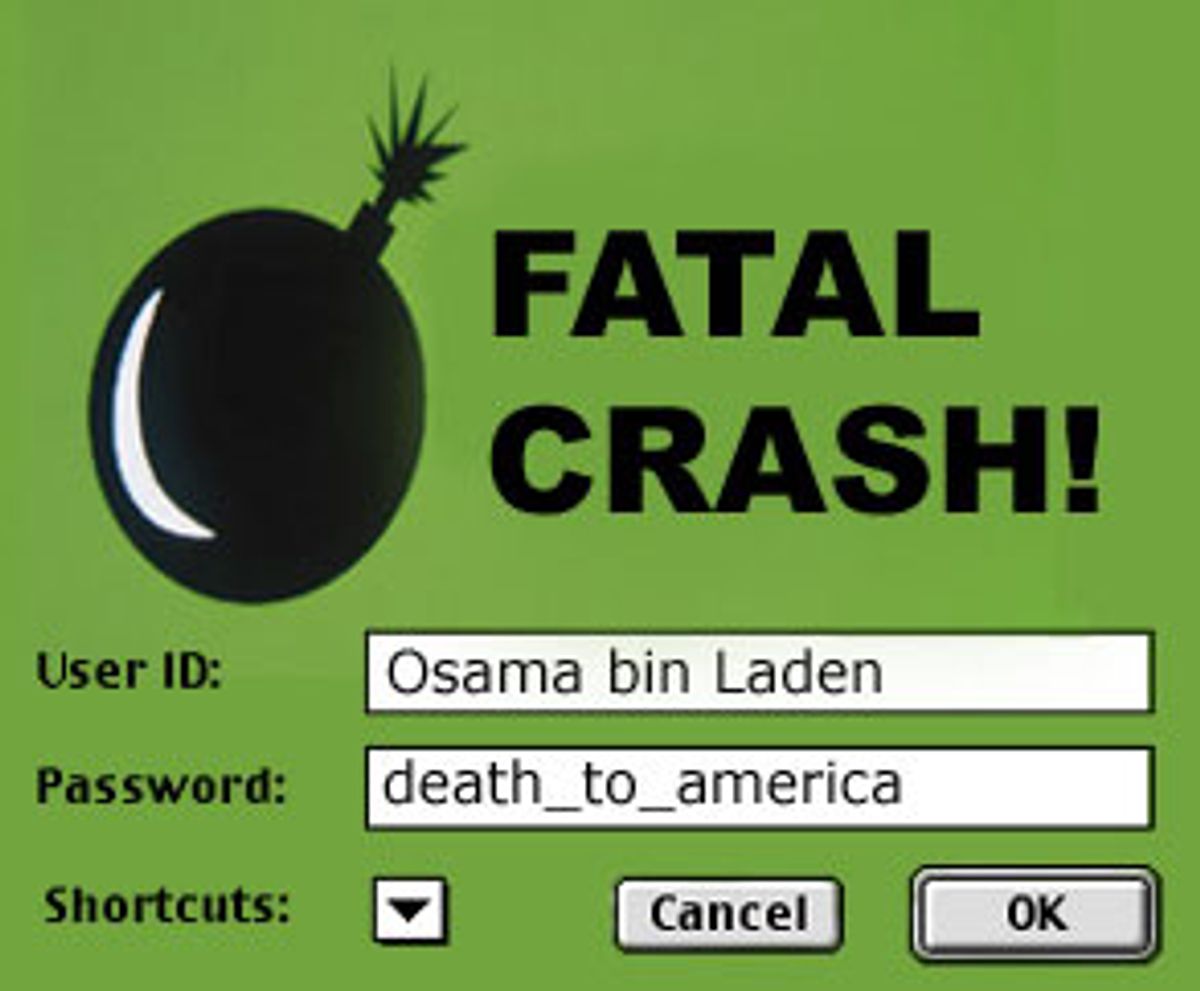 This week, the FBI obtained a court order, citing the Foreign Intelligence Surveillance Act that demanded specific information concerning selected subscribers to America Online and EarthLink, the country's two largest Internet service providers. On Tuesday, shortly after news of the destruction of the World Trade Center began to spread, the operators of the MagusNet Public Proxy Server, an "anonymous remailer" designed to provide security for Internet e-mail and other online communiquis, voluntarily shut down to prevent the system's being abused by terrorists (or pranksters). Meanwhile, a congressman called for a global ban on all encryption software that failed to include a "backdoor" allowing government surveillance, and a senator tacked an amendment onto an appropriations bill that would make wiretapping considerably easier.

Privacy advocates and civil libertarians are perpetually on guard, but after Tuesday's deadly airline hijackings, they are faced with a new and potent enemy -- public fear. Will a Congress desperate to do something in response to the horrifying carnage sweep in a slew of unprecedented restrictions on personal freedoms? The outcry of protest has already begun.

"If we accept 'anti-terrorism' measures that do further damage to our Constitutional freedoms, that will have been a victory for terrorism," wrote open-source software advocate Eric Raymond in a widely circulated e-mail sent Tuesday, the day of the attacks.

Even as the corpses of hundreds of victims still lay in the flaming rubble of the Pentagon and World Trade Center, the co-founder of the Electronic Frontier Foundation, John Perry Barlow, sent a mass e-mail imploring Americans to stand up to the threats against their civil liberties that would likely be provoked by the attacks, rights which, he noted, "far more have died for over the last 225 years than died this morning."

Some might find such a callous body-count calculus to be in poor taste, but the immediate and noisy response from privacy advocates reveals a sincere sense that basic American freedoms will soon be under concerted attack. Suddenly every step forward made in recent years in the fight for public access to encryption and strict limits upon electronic surveillance seems about to be rolled back. And, according to some critics, there's not even any evidence that new controls or restrictions would actually be instrumental in preventing future terrorist plots. Instead, the current horror would simply provide cover for would-be Big Brothers.

"I fear that civil liberties opponents will use this tragedy to further their own agendas," said Len Sassaman, an Internet security expert and privacy advocate.

"I think now is the perfect opportunity for those who want to do more comprehensive information surveillance on citizens at large. This is a really good excuse to do them," said John Sebes, an information security consultant.

Already, the new requirements for airport security have elicited skeptical eyebrows; not because there's a putative constitutional right to curbside check-in, but because the critics don't believe that the suicidal hijackings would have been prevented by the new measures: "By mandating these new restrictions on boarding aircraft, we've only demonstrated that we're willing to make rules that make us feel secure, but don't provide real security, only additional inconvenience," said Sassaman.

Historically speaking, "extraordinary circumstances," such as a war, have resulted in the temporary suspension of some civil liberties. Two of the nation's most revered presidents, Abraham Lincoln and Franklin Roosevelt, restricted civil liberties during the Civil War and Second World War. So one might expect that in the wake of one of the most vicious attacks ever experienced on American soil the government might take strong measures in response. But what's worrying some privacy experts is that no one appears to be thinking in terms of "temporary" restrictions.

"I think it's unfortunate that we're not waiting to see what happened here before people start prescribing broad restrictions on our civil liberties," says Cindy Cohn, the legal director for the Electronic Frontier Foundation. "What we're seeing is broad-ranging suggestions, not temporary restrictions, for changes in the law. Those are much more worrying than some temporary restriction."

In his e-mail blast, Barlow went so far as to compare the attacks on the World Trade Center to the fire at the Reichstag that led to the rise of the Nazis in Germany. The comparison didn't sit well with Jon Callas, an Internet security expert and cryptographer, who noted that the Nazis themselves helped start that fire.

Raymond, the libertarian open-source guru, known for his love of firearms, suggested that if the passengers of the hijacked jets had had guns the four-plane tragedy might have been prevented: "We have learned today that trying to keep civilian weapons out of airplanes and other areas vulnerable to terrorist attack is not the answer either -- indeed, it is arguable that the lawmakers who disarmed all the non-terrorists on those four airplanes, leaving them no chance to stop the hijackers, bear part of the moral responsibility for this catastrophe."

But the privacy outcry has already inspired its own backlash, even from within the crypto and privacy communities.

There are a number of people who were really disappointed when the world didn't end in Y2K and this is their opportunity to say that it is ending," says Callas. "Those who forget history are doomed to repeat it, but those who remember history are perhaps doomed to sit around fretting that history is going to repeat itself."

At the heart of the debate now raging within the privacy community is the question of whether some events, such as the WTC attack, are so heinous that they justify the curtailing of civil liberties. "Do those of us who believe in civil liberties believe that the FBI shouldn't be putting phone taps on those people [the terrorists] if they know where they are?" says Callas. "We end up having to concede the point that sometimes the extraordinary powers that law enforcement needs are needed, and if it isn't now -- then when? This is an extraordinary situation -- hello! Now, if it turns out that the authorities abuse their extraordinary powers, then they really have to answer to all of us."

The hardcore privacy advocates respond with an age-old warning: Any temporary restrictions now may lead to a permanent infringement on liberties later, a sort of "slippery slope" to a less free society.

"I think it's potentially very difficult to go back. It's not a policy issue, it's a technology issue," says Sebes. "With aggregating different types of information you do most of the hard work the first time around." A temporary food rationing could be lifted once troubles are over, but it's harder to definitively limit the uses that information is put to once two technical systems have been joined.

Yet even Sebes concedes that he might be willing to accept the possibility of abuses in the future given the exigencies of current reality. "I am not above deriving a significant degree of benefit in a modest degree of cost to privacy, where part of that cost is the possibility of future abuse," he says.

Jamie Love, the director of the Consumer Project on Technology, says he believes that privacy advocates should focus on finding ways of managing the likely increase in government surveillance initiatives, and not just decry them.

"I personally don't think that this will blow over," says Love, "and I will not be surprised if strong encryption and other privacy-enhancing technologies are declared illegal. Privacy advocates can resist this, but a good deal of attention should be spent on dealing with the issues of managing government surveillance, in ways that contain the damage to privacy, and preserve as much freedom as possible."

Love offered one suggestion: appointing a national privacy officer who might audit federal agencies, with a mission of preserving the public's privacy interests. "I think that there are many privacy advocates who will concede the public interest in surveillance for legitimate law enforcement and national security purposes," says Love.

Richard Smith, chief technology officer of the Privacy Foundation says that the scale of the tragedy last Tuesday may be leading some privacy advocates to exaggerate the new threat: "A lot of civil libertarians are worried that in order to control terrorist threats, there are going to be draconian measures put in place. They're convinced that people will overreact. But frankly most people are pragmatic. I don't see a big problem here. I see some changes that we'll have to put up with, especially at airports, but not a major loss of liberty."

No matter how the argument plays out, one observation seems undeniable -- the WTC tragedy is stirring up everyone's deepest anxieties, regardless of what point on the political spectrum they occupy.

"Everyone, on each side of the debate, is reacting to their own fears," says Smith.