Life will never be the same

Ever since last Tuesday, that's been our mantra -- but what does it mean? 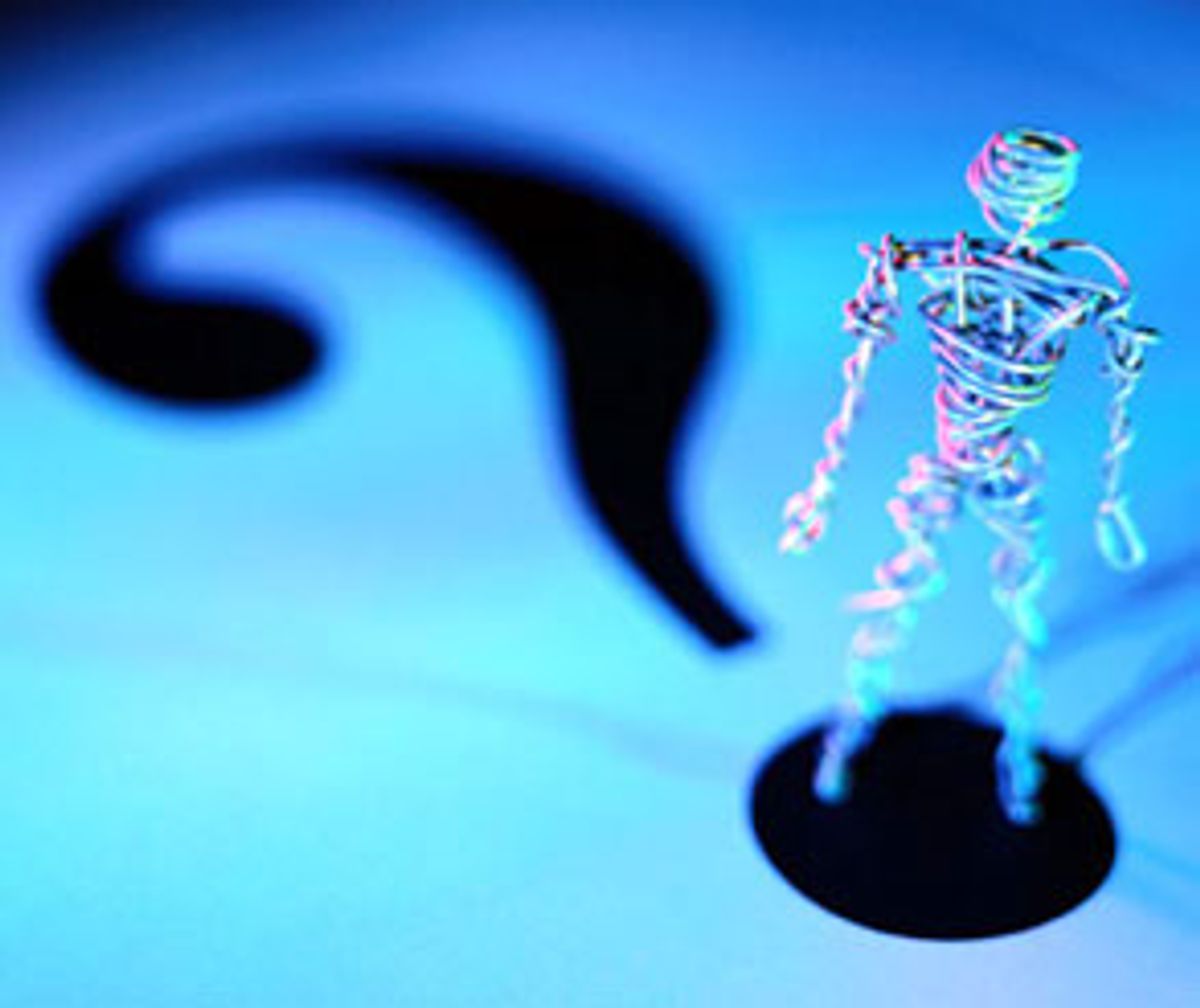 For what was already beyond words, we've begun running out of sentences. The more we parse and learn -- about a hijacker's apartment, about heroic sprints up smoky stairwells, about weeping calls to loved ones from the 105th floor -- the closer we get to closing our mouths for a very long time. In the interim, almost like a final, reflexive twitch, we've cobbled together a few mantras: How could this have happened? God bless America. Nothing will ever be the same again.

It's that last one that resonates longest, rattling around even after the TV's off. Nothing will ever be the same again, we repeat, and yet we can't begin to say what will be different.

For now, we linger in the practical and certain: There will be policy changes. War scenarios will be discussed; Internet activity might be monitored; no box cutter will ever appear in another airport as long as we live. But policy remains the province of press conferences and committee meetings. The angle of Flight 11 as it slants into the World Trade Center's north tower -- this has lodged in us far deeper, and will require a deeper transformation to meet it.

The current is nauseatingly new, and any genre of change feels possible: Psychologically, socially, culturally and spiritually, we could wash up miles from where we were just a week ago. And asking people what's next is a little like pressing squirrels about Heisenberg. We are in the dark. Not only is nothing clear, but some things seem better opaque. To speculate about profound changes we'll feel in a week or a year or a generation is to venture into the unfamiliar, and the unfamiliar is what got us here in the first place.

We do see differences already -- firemen as celebrities, second glances at unmarked packages, occasional doors held for occasional strangers -- but this is still the short-term. It's the strange, gradual fallout that defines a historical moment, rarely accessible at first. Who could have guessed, in 1963, that the assassination of a president would eventually bring on years of profound mistrust for authority? News outlets will struggle to anatomize the cultural effects of last week's attacks, but long-range ripple effects are rarely comprehensible until they've moved on through. We start by mapping what we're sure of.

"People are going to be a little more anxious and suspicious," says Ann Kring, associate professor of psychology at the University of California at Berkeley and director of the school's Clinical Psychology Program.

"The dynamics that apply to a person over a lifetime are the same that apply to a nation over generations," he says. "Immediately we'll see post-traumatic stress [disorder] in individuals, then later in groups, and so forth."

In 1999, Turkey's Psychological Association brought McKenzie in to train psychologists in the wake of its catastrophic earthquake. Natural disasters and man-made ones generate different psychological responses; still, there are constants within post-traumatic stress disorder. The symptoms -- flashbacks, intrusive thoughts, avoidance, nightmares -- could still be playing out hundreds of years down the road in America, McKenzie says. "I think it is a large enough event."

Kring notes that Americans have so far responded to their fear with a fully integrated metaphor of "healing." Even the most rugged of New York's firemen throw around the vocabulary of raw wounds, scarring and closure. Kring suggests that we've been moving in this direction for years -- toward the scraped-knee model and away from God- and church-based coping methods.

"It's more of a secular way of moving on," she says. "There aren't so many religious overtones to it."

This widespread familiarity with trauma rhetoric evinces a larger civility that's altogether startling; the stunningly heroic rescue workers show us gentleness rather than machismo, gravitas instead of numbness. The spirit has spread, too. We do hear awful stories of attacks on Arab-Americans, but often we hear about niceness. To the extent that these stories are exaggerated by the media, they're nonetheless contagious. People talk about the New Civility like they once did about the Internet.

"It's an opportunity to take stock," says Glenn Dromgoole, co-founder of Americans for More Civility. Dromgoole's group does what you'd expect: With articles, speeches and an annual award, it encourages a radical pleasantness in the world -- a charter that doesn't even sound so strange after last week.

"There's been so much partisan animosity over the last 20 years or so," Dromgoole says. "Maybe this will help us get over it."

A little pushing and Dromgoole concedes that flag-waving and civility aren't always the same, and the latter doesn't always stick.

"Right now it's bringing us together," he says. "How long that will last, I don't know."

It's not just manners that have suddenly appeared on the table. The astonishing reports of generosity and kindness drifting out of the rescue efforts have led some to believe a fundamental reinvention of society is around the corner. Whatever the cornerstone -- civility, empathy, fury -- the allure of something like social alchemy is remarkable.

"It can be a total disaster or an incredible opportunity," says Forrest Schmidt, an activist organizer with the International Action Center, a multifaceted hub for activism in San Francisco and New York. "Who knows? Maybe as a result, six months from now Americans won't be able to say, 'Let's bomb someone.'"

But Maple Rasza, an activist and co-organizer of April's Living Wage protest at Harvard, isn't convinced the shock will translate directly into an opportunity for wholesale cultural reinvention and refurbishment. While salon radicals might see this as a crack in the door, he says, "Anyone actually invested in change thinks this is nothing but a disaster."

"The labor movement, for example, was starting to become more interested in radical and direct action, and in transnational issues," he says. "This will only reinforce old tendencies to focus nationally."

Rasza also worries that getting average citizens to be critical of the government will only get harder. Those already deeply entrenched against Washington, on the other hand, could just get madder. "This could be disastrous for militia types," he says. "The growth of the security apparatus will be unparalleled."

Marc Perkel, one-time senatorial candidate and proprietor of Overthrowthegovernment.org, is very much concerned about this security apparatus.

"This is going to change the way the whole world sees itself," Perkel says. "But we don't want to become a closed society over a single incident."

For Perkel, last week's attacks registered as a double tragedy. A free speech advocate (see his other Web site, Flagburning.org, for irrefutable proof), Perkel comes from the camp that immediately saw a raft of civil liberties in jeopardy. This is the same vision that got him 38,000 votes in last year's Republican primary in Missouri -- too few to beat John Ashcroft, but enough to prime the pump. In the wake of the attacks, Perkel worries that something masquerading as patriotism will usher us into an era of curtailed freedom and privacy.

"I'm very disturbed about this," he says. "John Ashcroft may be listening in on this conversation."

Fear, civility, activism -- it's not hard to guess how these might take shape after the tragedy. The real uncertainty regarding the future lies in the more oblique corners of our lives, places we haven't had reason to visit for years, or ever.

Last Tuesday's terror was "a call for the awakening of those who are still in a semi-dream state," according to Archangel Michael (and channeled through Ronna Herman) on Spiritweb.org, and Michael's not the only one dispatching us inward to our spiritual selves.

"These events could prompt a reevaluation of our priorities, of the role of religious belief in our society," says Rev. Welton Gaddy, executive director of the Interfaith Alliance. "This creates an opportunity to have conversation at a more profound level than we often do."

Gaddy also shares the growing anxiety about curtailed personal rights -- he worries we'll take a "My Lai approach to freedom and destroy it in order to save it" -- but his insight into spiritual resonance says the most about our prospects. A brush with death, he says, will radicalize your views on life.

In other countries, ones where the drinking water sometimes needs boiling and the police carry larger guns, the views on life have been radical for a long time. Instability and uncertainty often appear to be attended by a fairly evolved philosophy; ride a city bus in Santiago, Chile, and the person beside you might well mention Hegel.

Will America become more reflective? We have seen preliminary inroads into the language of meaning over the last few days. It's the rudiments of philosophy -- survivors tell the cameras that life is fragile, reporters remind us that everything can slip away in a moment -- and maybe we'll stay there, or go back, or maybe we'll go deeper.

"Maybe the strife will cause us to look around, ponder a little more about life, to be more philosophical," McKenzie says. "A bigger catastrophe can cause some people to seek deeper meaning in life. Others will just go numb."

President Bush, too, recognizes the spiritual import of the recent events, and is calling on it to help reify what it means to be American: "It is said that adversity introduces us to ourselves. This is true of a nation as well," he told us last week. "In this trial we have been reminded, and the world has seen, that our fellow Americans are generous and kind, resourceful and brave."

Kring, however, isn't sure an emphatically thoughtful society is so healthy. "It could be maladaptive to always be thinking about life instead of living it," she says.

As with any decent existential discussion, details have been omitted. Predictions for our cultural and philosophical reconfiguration, even the confident ones, say nothing about how the day-to-day will go. What will we talk about on the city bus? Will we buy the more expensive stereo? Exactly how many roses will we stop to smell?

"We must accelerate the development of human cloning technology because it will make terrorist attacks inefficient in the future," said a press release from the Raelian religious group, clearly attempting to bring some specificity to our vision of the future. "Indeed, when phase 3 of cloning will be reached (the one which will allow the direct cloning of an adult thanks to the Accelerated Growth Process), it will be followed by the uploading or downloading of information into one's brain that contains personality, memory, and life experiences. Therefore, when a tragedy occurs, such as the recent one, cloning will bring back to life all of the victims -- directly as adults and their personality will be downloaded into their brain."

Nothing will ever be the same again, we say, and it's both grim observation and solemn pledge. The pledge part insists we can't let things be the same, or else the same will happen again. We now wait to find out. Those of us no longer hovering over the phone have transitioned into a more general floating. We move around the house, wandering from room to room, maybe cook an egg. The plane doesn't stop slanting into the tower, slow then fast, slow then fast, and at the end of each day we clench our fists a moment then fall asleep as fast as possible. It's from an odd place that we wait to see what changes -- somewhere between the familiar and the stunningly new.

"We just don't know what this will all mean," said a passenger on San Francisco's BART train Thursday. "I'm sort of impatient to find out."