The "enemy" we barely know

A writer who has traveled extensively in Afghanistan talks about how little we understand its people, how dangerous it is to underestimate them and why they have cause to resent the U.S. 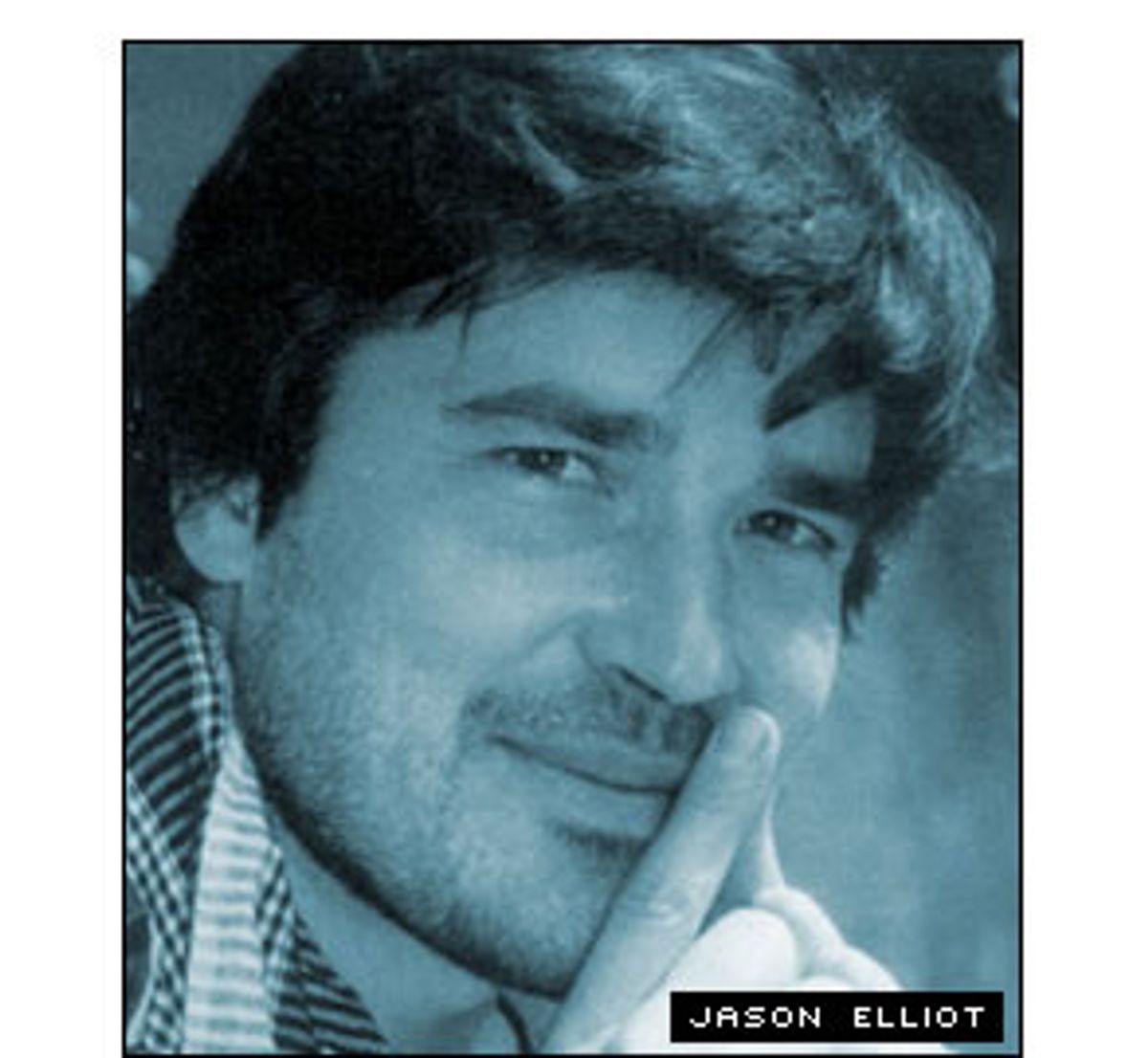 Since his first visit to Afghanistan in 1979, at the age of 19, British writer Jason Elliot has journeyed through that troubled nation several times, during the Soviet occupation, which ended in 1989, as well as afterward. Two of those visits, including time spent fighting with the anti-Soviet mujahedin resistance, became the basis for a recently published book, "An Unexpected Light," a travelogue and paean to what he describes as "a place you either love or hate. I came to love it for better or worse." In the aftermath of the terrorist attacks of Sept. 11, Elliot has seen the land he loves so much characterized as a vipers' nest of terrorism and threatened with the military wrath of the United States. Salon reached him at his home in London to obtain a different view on Afghanistan.

Even before the attacks on the World Trade Center and the Pentagon, you felt that Afghanistan wasn't being fairly represented in the press, right?

Yes, my book was meant to be an endeavor to open a door onto this culture, its people and its history, to paint them in three dimensions. One only hears bad news about this place. And in the reports I'm hearing, I don't recognize the place I know. It sounds like another world.

What time period does your book cover?

It's mostly based on a six-month trip that I made just before the country fell under the control of the Taliban, a time when the former government was nominally in control. I've visited Afghanistan since then as well.

That government still exists, but in exile, right? They still control a small territory in the country.

Yes, they have been fighting the Taliban since their rise. I hesitate to talk about controlling a "small territory" because things are always changing and "small territory" is an ambiguous term in Afghanistan. Territory is not always a good measure. The Taliban is fighting opposition on several different fronts -- to the west, the north and the northeast.

What in the media depictions of Afghanistan strikes you as most alien to your own sense of the country?

The most worrisome aspect is this reductionism which equates all terrorism with bin Laden and bin Laden with Afghanistan in three easy steps. Afghanistan, like any country, is a complex and diverse place. They may all wear the same headgear, but they can't be lumped together. Ordinary Afghans have never liked bin Laden and they don't even like Arabs much in any case. For one thing, bin Laden is unpopular for giving Afghanistan a bad reputation for the last few years. When I say "ordinary Afghans" I mean people who are not sucked into this stern interpretation of things that the Taliban espouse.

Are you talking about Muslims?

Afghanistan is probably the most Muslim place in the world. That doesn't mean that they support bin Laden. There's this tendency to lump things together. Taliban rule is as close to order as any regime that's preceded it in Afghanistan. But the thing that's seldom pointed out is that if you have no choice as to your leader, anyone who restores a modicum of peace is better than a condition of no civil security whatsoever. If they make it possible to cross the road without being shot, there will be an element of support there. But ideologically that support is not unified. The Taliban are from a particular part of southern Afghanistan and they've never represented the wholesale views of all Afghanistan.

So they don't all necessarily share the Taliban's opinion of the United States?

I had an interesting experience in 1998 after the U.S.-fired cruise missiles on bases said to be bin Laden's. Ordinary Afghans made a distinction between Americans as a people and America as its political decisions are made. It would be heartening if Americans could give the same considerations to Afghanistan. On the other hand, it's not in the nature of Afghans to respond well to being bullied. They have a saying: As a friend, an Afghan will follow you to hell, but you can't drag him to heaven.

That statement sounds like it was directed at the Taliban, who want to force everyone in the nation to abide by their notions of holiness.

That's why you have this ongoing conflict there. The Taliban is by no means popular. If you've been living under the fear of death and with no civil security, you don't really care who keeps the peace. The Taliban is more of a tribal phenomenon than representative of all Afghanistan. Afghanistan is not one unified country. It's got a half-dozen very different peoples within the same frontier. In the north of the country, you find another people entirely. What's enabled the Taliban to come to power is the same thing that's dogged Afghanistan for years: external forces interfering with the country. They could sort out their problems pretty quickly on their own if it weren't for that.

Do you have any thoughts on what might happen if the U.S. attacks Afghanistan?

It's a very brave person who makes predictions about that part of the world. But I can say that I think that if there were American military action in Afghanistan it would be a complete disaster. Despite not being fond of bin Laden, Afghans don't take well to being invaded, as both the British and the Soviets learned to their chagrin. These are people with nothing left to lose. It would be the ultimate humiliation. And it would not be lost on Muslims around the world, either. This is one of the poorest countries in the world, and it has had to fight off one of the great colonial superpowers, Britain, then one of the modern superpowers, the Soviet Union, only to now be attacked by the last remaining superpower. And the irony is that Afghans would be fighting with U.S. taxpayers' money and with weapons bought with that money.

How does the ordinary Afghan perceive the U.S.?

When the Soviets withdrew from Afghanistan, a great many Afghans felt that America, who had sponsored them in the conflict, would help them rebuild their country, which they'd destroyed in the process of fighting communism and, as they saw it, defending the free world. That conflict went on for 10 years, and the Afghans eventually forced the Soviets to withdraw. They feel that there's an unacknowledged debt to them on the part of the free world. Afghanistan was on the sharp edge of the conflict with communism. They were actually fighting it on the ground, and a million or more died in the 10 years of fighting the Soviets.

So even those who don't like the Taliban feel betrayed by the U.S.?

That's probably too strong a term, but they learned a new cynicism about the U.S. In their eyes, the U.S. rolled up its maps and left as soon as the Russians pulled out. It left a bitter feeling.

I can't think of a more freedom-loving country than Afghanistan. That may sound strange to Americans right now, but these people gave everything they had in the fight with the Soviets. That left their country destroyed. In the absence of any help afterward, the country fell apart and became a haven for terrorist groups. Afghans are deeply disappointed that they didn't get much help in rebuilding.

Afghanistan has become an ideal place for terrorists to hide because no one will stop you. Bin Laden isn't looked on with fondness, but the business of terror goes far beyond Afghanistan. It's just one piece in a jigsaw puzzle, just as bin Laden is only one piece. He's implicated in all this, of course, but it's a much more pervasive phenomenon than one guy wearing a funny hat in a cave. He's not even an Afghan; he's an Arab from Saudi Arabia, chased out of there to Sudan and then chased out of Sudan to Afghanistan. That was the one place where the authorities, particularly the Americans, couldn't get to him. That's a result of the general lawlessness. It doesn't mean you should equate the whole country with him.

How much support is there for the Taliban in their defiance of America?

At the time of the journey that's the basis for most of the book, I was mostly in areas opposed to the Taliban. This is a country in a tremendously impoverished state. And as if that in itself wasn't painful enough, American sanctions added insult to injury. That was one of the pressures placed by the U.S. on the regime. And this is the same regime, by the way, that an American oil company, UNOCAL, was seeking to form a consortium with in order to build a pipeline across Afghanistan. We're not hearing a whole lot about this $4 billion project to ship natural gas and oil through Afghanistan.

Bullying them just plays into the Taliban's hands. The fact that $100 million worth of American cruise missiles were fired into two of the world's Islamic nations is not lost on the Muslims of the world. Of course there's defiance. For people coming from a more prosperous place, it's hard to understand how this feels. It's hard to know what that's like. Anyone who has suffered that kind of degradation is bound to latch onto who they perceive as the cause.

I have a rather poignant memory of speaking with people in the former government who hoped they'd get support from America. Five years ago things were hanging in the balance and the Taliban were an unknown force. When the Taliban came into power in Kabul, there had been some support for them in the U.S., but it was swiftly withdrawn in light of their attitudes toward human rights. They've become isolated. But back in 1995 that wasn't so clear. America turned a blind eye to Pakistan's support for the Taliban when it might have supported a more moderate government.

Why didn't the U.S. support the moderates?

They were too independent-minded. The U.S. thought they could manipulate the Taliban through Pakistan. And this has created a Frankenstein monster that is out of control largely.

Do you have a sense of what the U.S. could do to repair some of the damage to its relationship with the Afghans? Or do you think the moment has passed?

That's my feeling. This ball has started rolling now. There were certain junctures -- at the end of the Soviet occupation there could have been more positive support of the nation in general, and also support for the former government. Continued sanctions are not going to create any love for the U.S., and any military action is going to be deeply counterproductive. It's very volatile right now.

I personally am fully in favor of rooting out the characters responsible for these events. But it's not going to be done with bombs. Striking back with a new approach would be the most profound sign of strength that America could offer. Out of crisis comes opportunity. There's a huge amount of support for America around the world and it will only increase if that happens.