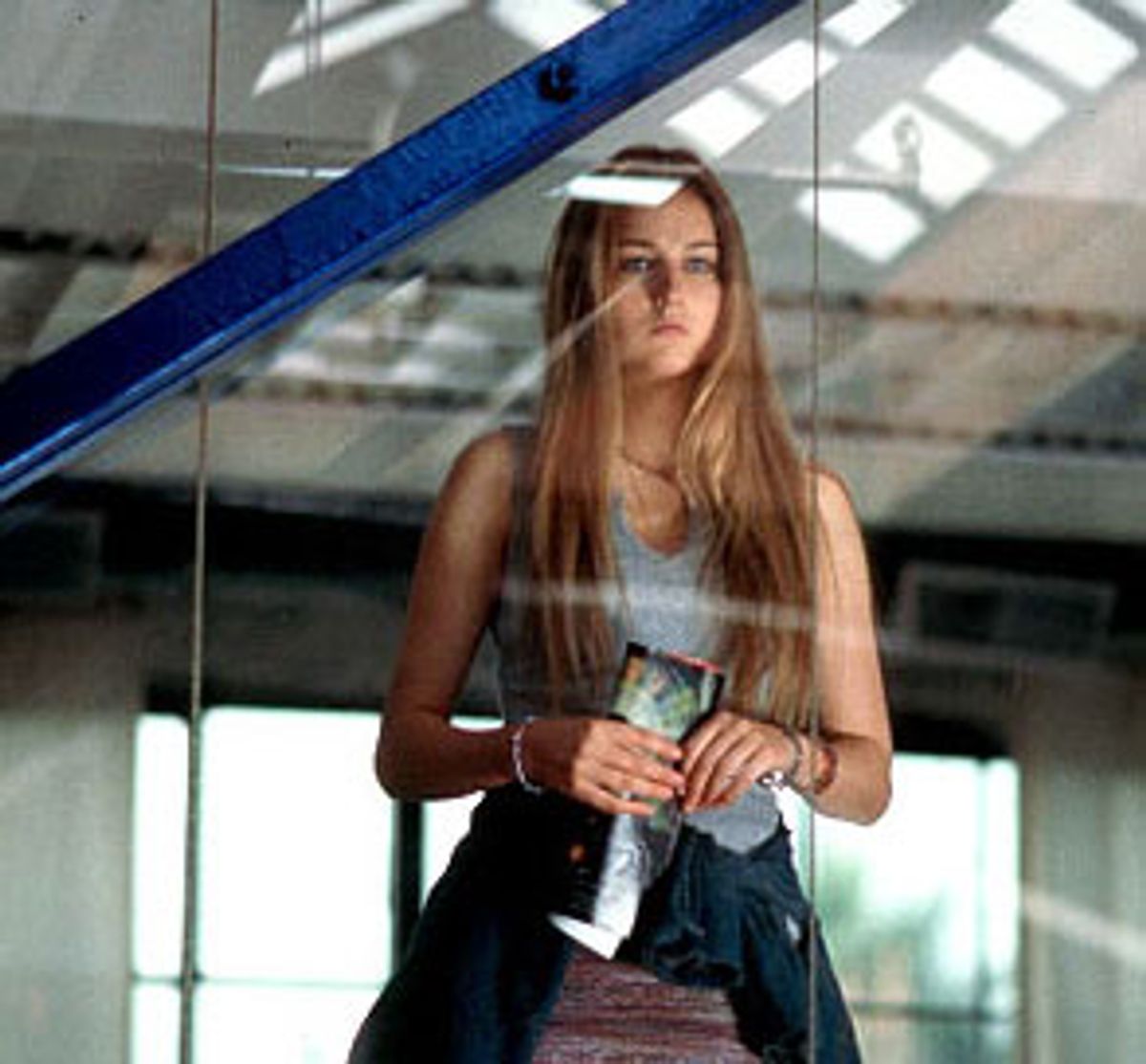 Wesley Strick, the screenwriter, is my hero. I admire anyone who's figured out how to do as little work as he does and still make a good living. It can be dangerous to speculate on screenplays because you never know what's been cut out in the shooting. But I've seen a lot of movies made from Strick's screenplays by now (among them "Wolf," "Final Analysis" and Martin Scorsese's remake of "Cape Fear," the nadir of the director's career), and with the exception of his fully worked-out script for Joseph Ruben's thriller "True Believer," there always seems to be some basic bits of logic missing.

In "The Hand That Rocks the Cradle," I couldn't figure out why the suburban couple didn't realize that it was wacko nanny Rebecca De Mornay turning their lives upside down. (They must be the most willing dupes ever in a suspense thriller.)

Strick's script for "The Glass House," directed by Daniel Sackheim, has a very workable premise for a thriller. Leelee Sobieski plays Ruby Baker, a teenager who is orphaned along with her younger brother, Rhett (Trevor Morgan), when their parents are killed in a car crash. They're sent to live with the guardians their parents chose, former neighbors Terry and Erin Glass (Stellan Skarsgård and Diane Lane), a car dealer living above his means and a doctor who's developed a taste for the medicine she dispenses.

Almost immediately Ruby realizes that things are off. Terry can barely conceal his sexual interest in her (Skarsgård is appropriately oleaginous but perhaps too blobby to be truly menacing); she comes home one night and catches Erin shooting up; and, despite the presents her new guardians lavish on her and despite their swank lifestyle, she keeps stumbling upon evidence that makes her think the pair are after the kids' considerable inheritance. Especially when she goes to Terry's office and catches a couple of standard-issue movie thugs shaking him down for money he owes them.

For a while, "The Glass House" proceeds efficiently enough. Ruby's discovery of the clues that reveal the Glasses' real intentions are planted with just enough cleverness to give the movie a stretch of mounting suspense. And, though it's not one I'm particular fond of, the movie has a look. Production designer Jon Gary Steele and cinematographer Alar Kivilo contrast the warm, lived-in suburban prosperousness of the house Ruby and Rhett live in with the Glasses' Malibu showplace. Sitting above the ocean, the place is something to see, a bloom of slopes and angles that looks like the bastard offspring of Frank Lloyd Wright and Frank Gehry. The movie is right out of Architectural Digest.

When Terry locks Ruby and Rhett in the basement, it's all minimalist geometric shapes and cold, gray stone; it looks like "Hansel and Gretel" as designed by the British-Iranian architect Zaha Hadid. Inside, the place is all glass, chrome and high-tech gadgets, as if somebody went on a binge at Brookstone and the Sharper Image. It doesn't look as if there's one comfortable spot to park your butt in the whole joint.

Adolescents at the center of thrillers can be a good idea because their emotions are so close to the surface that they're constantly in danger of giving away what they've figured out. (Probably nobody has done this better than Jill Scholen in "The Stepfather.") But an active sense of injustice is not the same thing as sullen petulance, and that's primarily what Leelee Sobieski gives off. She was good as a nerd in "Never Been Kissed" and uncomfortably effective as a child whore in "Eyes Wide Shut." (Just seeming to be alive is a major accomplishment in a Kubrick movie.) Here, she's the real glass house. Nothing seems to disturb that long oval face, and her voice wafts in on an anesthetized wave. By the time Erin is shooting her up to keep her sedated, you want to ask, "What's the point?"

But Sobieski's affectlessness doesn't matter as much as the movie's "Huh?" factor. Bruce Dern plays an estate lawyer who is allegedly keeping track of the Bakers' financial affairs. Why then doesn't he notice that Terry has stopped sending the kids to private school and has been refunded the tuition, especially since the Glasses have access to the kids' inheritance? And when Ruby comes to Dern's office to say that Terry has made a pass at her and she's caught Erin shooting up, are we meant to think he's just calming the girl when he tries to explain it away? Would you send a kid back to a house like that? Strick's screenplay falls back on the oldest trick in the book, threatening to make the kids wards of the state if their foster home doesn't work out.

Dern keeps telling Sobieski she and her brother have no one else to take them in when their prosperous uncle (Chris Noth in a nothing role) has shown up at the funeral to offer any assistance he can. And since the kids are in great financial shape, why doesn't the lawyer even mention the possibility of emancipated minor status to Ruby? Nobody in this movie seems to have done their job, from the social worker (Kathy Baker) who puts Ruby's complaints out of her mind after one brief visit (after taking Erin's word that she's a diabetic and that's why she was shooting up) to the cops who appear not to have even thought of checking the car the parents were driving when they crashed. You can just imagine how the writing of the movie proceeded. It obviously became clear to Strick at one point that audiences might start asking why Ruby's friends, who haven't heard from her, never check up. So we get a brief scene where the girls figure she must have become a snob living in Malibu, and later for her.

And the movie lacks a sense of humor. If the filmmakers had had the daring to make Terry sexy, his advances to Ruby might take on an even creepier quality. And they've missed the humor in the financial woes of people living a posh lifestyle who've got in over their heads. Would that their trendiness was treated with the satirical precision Michael Tolkin brought to the couple played by Judy Davis and Peter Weller in "The New Age." It might even have worked if the Glasses' worldliness was played off against the kids' suburban tastes. (I didn't have much sympathy for them when they wouldn't even try Erin's calamari and portabello risotto. Yum.) And the wonderful Diane Lane is wasted. She's admirably tense when things start coming apart. As always she has the ability to allow you to read on her face just what each emotion costs her. But a role that doesn't allow Diane Lane to smile is a poor thing.

By the time Little Bored Riding Hood is running for her life and Sackheim and Strick are pouring on the multiple endings, the movie has become a chore. And though the Glasses are the villains, the movie doesn't say much for becoming foster parents. You keep wondering if there wasn't a company they could have embezzled instead.