Mariah Carey gets all dressed up and finds no place to go. 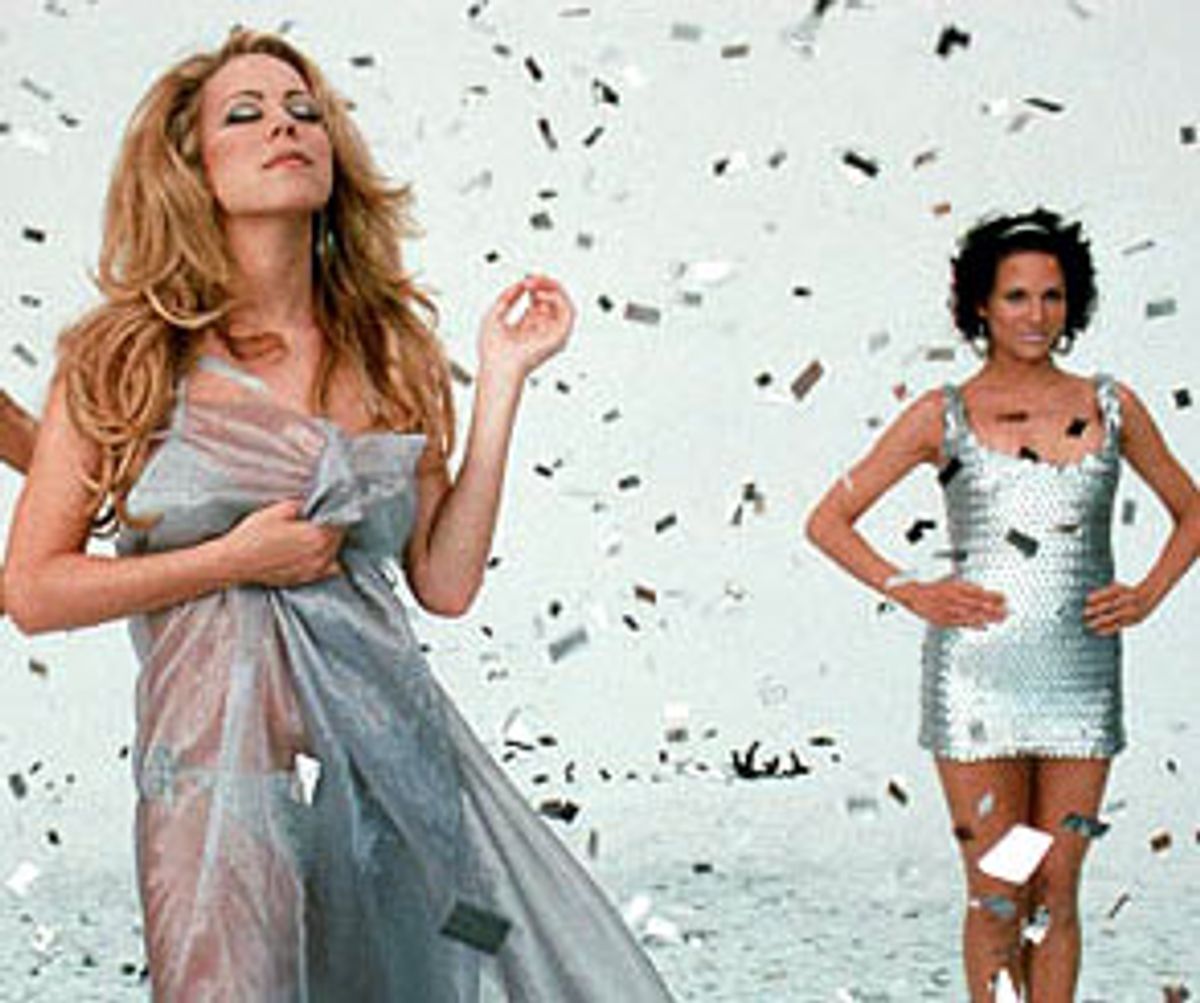 That clickety-clack you hear echoing through "Glitter," Mariah Carey's first foray into movies, is the sound of Carey's skyscraper heels scampering desperately up the ladder of superstardom -- she knows that those younger, hungrier hounds named Britney and Christina are closing in fast, nipping at her bodaciously well-formed bottom.

And so Carey pulls out all the stops, donning a succession of outfits from tarty bustier-and-fishnet ensembles (Youthful! Sexy!) to sophisticated but just barely see-through evening gowns (Elegant! Sexy!). She guards her pixie-diva persona with great care: Her character here, a rags-to-riches singer named Billie Frank, is little more than a type, a die-cut cutie-pie who, when presented with a plate of escargot at her first fancy restaurant, exclaims with dimples-and-sunbeams sassiness, "So somebody went all the way to France for this?"

And, of course, Carey turns the ululator on full blast, taking a number of vivacious '80s-era pop hits (most notably Terry Lewis and Jimmy Jam's "I Didn't Mean to Turn You On") and rerecording them with hideous vocal decorations that render them all but unrecognizable. Melisma is a treacherous disease that, left untreated, offends the ears of millions of listeners daily. Won't you help?

The great failure of "Glitter" is that it stops just short of being deliciously bad enough to qualify as a camp classic. The picture opens with flashback scenes of Billie as a child: Clutching an orange kitten, she and her well-intentioned but unreliable jazz-singer mom (Valarie Pettiford) watch in anguish as their house burns to the ground. (It was Mom's cigarette, dangling from her fingers as she fell asleep, that started the fire.)

Billie's mom, unable to care for her, drops her off at the local orphanage. Later, spunky Billie makes her way to New York City, where club DJ Julian Dice (Max Beesley, in a fetching Marky Mark haircut) discovers she sure can sing. He becomes her producer and boyfriend, nudging her along toward fame, stardom, and as many low-cut tastefully see-through evening gowns as she could ever hope to wear.

But, as we learn, fame has its price. Judging from the look, the writing, the acting and the direction of "Glitter," I think it's about 99 cents -- a buck-twenty if you count Carey's groovy-looking '80s spike heels. Director Vondie Curtis Hall ("Gridlock'd") favors fancy but irrelevant camera effects, and he fixes his lens on Carey with relentless intensity even when there's nothing to look at, which is most of the time. Her expressions all look as if they've been painstakingly chosen from a catalog -- what Carey throws off as an actress is fear, fear of playing a character that could ever be perceived as remotely unlikable. As a result, her Billie is numbingly bland. Her best expression is a self-aware impersonation of childlike delight, seemingly fueled by the conviction that if she tries really hard, she can surely convince us she just stepped off the farm.

I confess there's a part of me that wishes I could shield Carey from my own criticism of her: Her recent personal problems have been reported well past the point of exploitation by the press, and no celebrity deserves that.

But there's an overarching principle to consider here: Movies shouldn't be poo. I desperately wanted "Glitter" to be trashy and over-the-top, to be so courageously awful that I'd be able to recommend it as an afternoon of candy-floss diversion. As it is, it isn't nearly bad enough to be that kind of good. It's simply there, all dressed up with no place to go, and that's the most damning thing you could say about it.