What's up with Generation Y?

Will the largest teen generation in history prove to be a mass of zombie consumers -- or an awakened giant filled with a terrible resolve? 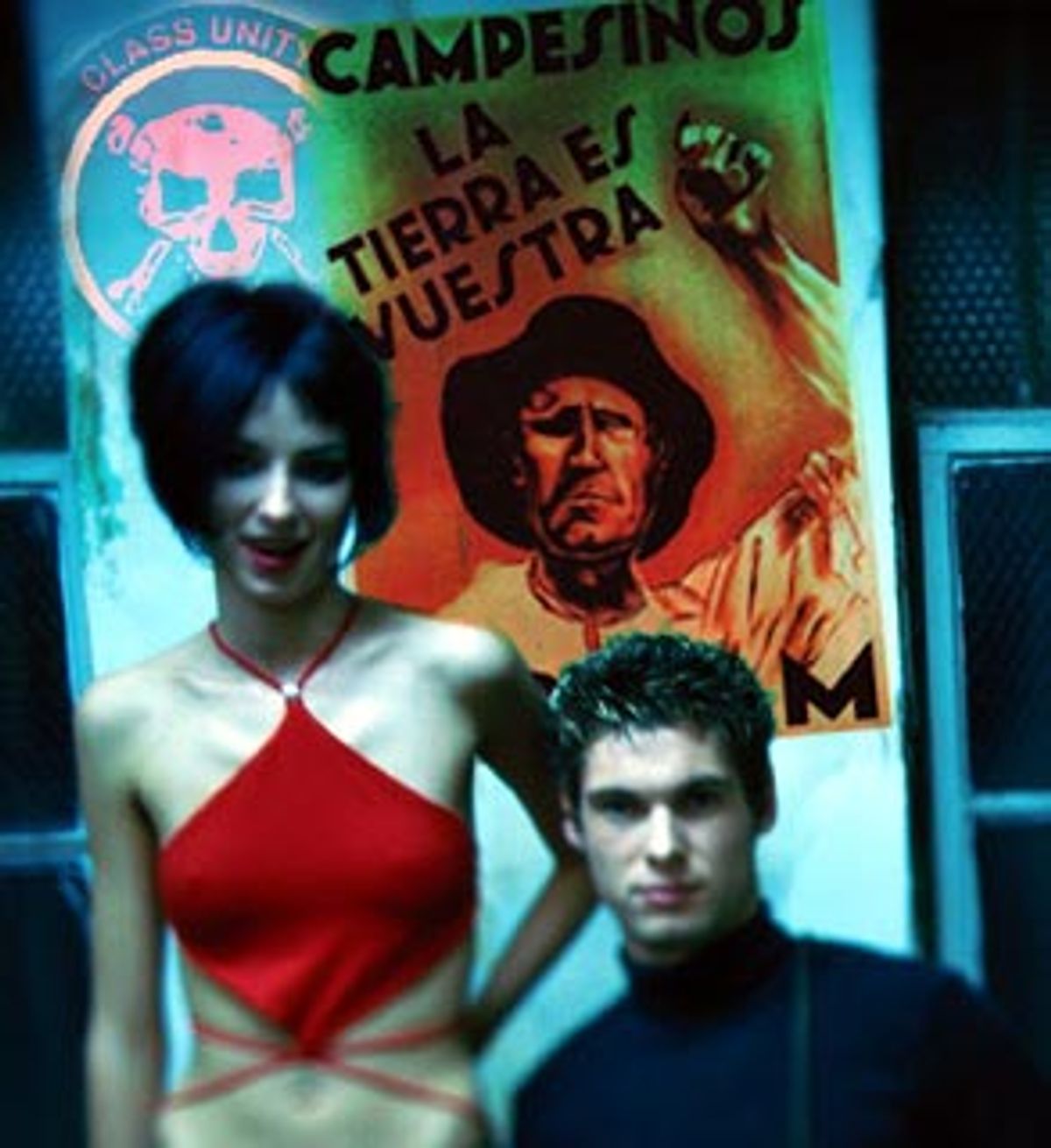 As America struggles both literally and metaphorically to climb out from under the bloody wreckage of Sept. 11, many a pundit has taken to quoting the famous line often attributed to Japanese Admiral Isoruku Yamamoto in the wake of the attack on Pearl Harbor: "We have woken a sleeping giant, and filled him with a terrible resolve."

Never mind that, as World War II scholars have pointed out, Yamamoto never uttered those words. (To quote the moderators of the Pearl Harbor Attacked message board, "Nobody can provide a source for this quote prior to the release of the movie 'Tora! Tora! Tora!'") There is a potential sleeping giant here, but it isn't the military-industrial complex that Hollywood's Yamamoto or the current crop of talking heads mean to evoke. It is Generation Y, and it has just gotten a big bucket of ice water in the face.

Encompassing more than 70 million people born between 1980 and 1996, Generation Y is, at its core, the largest group of teenagers in American history, dwarfing even its parents, the baby boomers who came of age in the '60s. In the next decade, it will come to represent 41 percent of the U.S. population, according to the Census Bureau. Until recently, its entire existence has been spent in a period of unprecedented prosperity and a cocoon of creature comforts the likes of which we've never seen before -- or at least not since Camelot, which, after all, was quickly interrupted by the unfortunate ugliness of assassinations, the war in Vietnam and riots in the streets.

For the business press and many sociologists, the defining characteristics of this generation to date have been its buying power ($275 billion spent annually, according to some estimates) and -- despite an astounding degree of media savviness, thanks to being raised with cable and the Net (and literacy be damned) -- its cheerfully compliant consumerism and gleeful malleability at the hands of the shrewd and ubiquitous über-brands and lifestyle firms. (From a piece published in the Washington Business Journal last spring: "Smarter marketers such as Tommy Hilfiger and Old Navy have understood that coolness is an important ingredient in cultivating Y's. Abercrombie & Fitch has done it best. What was once a conservative, white-male sporting goods store is now the coolest spot in the mall. ... [C]odifying what today's teenager cool is all about.")

If there could possibly be a bright side to the obscene events of two weeks past, it's that Britney Spears and the Backstreet Boys, "Total Request Live" and Limp Bizkit, "Survivor," Sony PlayStation, 'N Sync and their ilk will never be enough again. Everything changed on Sept. 11 -- it's a cliché, but it's true -- and that includes the sudden realization for many that their current opiates were nothing but placebos.

For Generation Y, nothing much has ever been at stake, even during our most galvanizing and engrossing national news events. (Did O.J./Clinton/Condit really "just do it," in the words of Nike? Who cares!) Hence even the "edgiest" of its music (Rage Against the Machine? Brought to you by Sony! Eminem? Vanilla Ice as hate-filled slasher-movie obsessive!) has just been another piece of empty but well-hyped product meant to be purchased on credit, displayed along with one's $150 sneakers as irrefutable evidence of hepness, and then consumed and shit out (just like the news), to be replaced the minute a new and improved model is sent hurtling down the corporate pipeline.

As the celebrated Gen X eggheads of the Chicago culture zine the Baffler have theorized, perhaps any form of genuine protest or real community (post-Seattle/grunge, they favored the word "scene") is impossible in an era when Madison Avenue has perfected its ability to transform everything into a marketing pose, "turning rebellion into money," as the Clash once sang.

Nevertheless, a revolution is a-brewin'. A small but passionate vanguard of Generation Y has been galvanized by the issue of globalization. They see as their enemy the mega-corporations that are trying to spread consumerism to every corner of the globe, killing Western culture and turning us all into the equivalent of those cannibalistic zombies traipsing through the shopping mall in "Dawn of the Dead." In addition to our souls, they believe that corporatization is claiming the blood of the Third World, as child laborers from Beijing to Jakarta and sweatshop workers from Tijuana to the Philippines manufacture the overpriced jeans and useless sunglasses that American companies brand with their copyrighted logos and spend billions to market to us as indispensable accoutrements of our hip, modern lifestyles.

Who are these contrarian anti-consumerists? They're the computer hackers who live to torment Bill Gates and Microsoft. They count among their numbers some of the legions of college students who use their dorms' T3 lines to distribute and download vast libraries of MP3 files -- the marketing of music through relentless tour sponsorships, saturation airplay via the monopolistic mediums of corporate radio and MTV, and overpriced major-label CDs ranking among the corporate byproducts that they hate most of all. Rare is the 20-something who is unaware of "No Logo" ("The book that became part of a movement," to quote the banner on the book's Web site) -- regardless of whether they've actually read Naomi Klein's phenomenally successful screed against globalization, or just seen it name-checked in interviews with Radiohead.

Some of these Y's have been motivated to more serious action. They disrupted the meeting of the World Trade Organization in Seattle in 1999, and rioted again at the Group of Eight summit in Genoa, Italy, in July. (The last event even produced a martyr, 23-year-old Carlo Giuliani -- and how's that for an ironic name right now? -- who was shot dead by a police officer as he tried to rush a jeep with a fire extinguisher.) Maybe all dissent is instantly commodified these days, as the Baffler boys say. But what's to stop youth from rebelling against the act of commodification itself? To bite the hand of anyone who tries to sell it anything -- including (or especially) music? Here is the battlefield of the real "new war."

So far, the activists' advance guard has been limited to the smallest fraction of Generation Y, but it has had an impact nonetheless. The movement is certainly being monitored in high places: On Sept. 13, just two days after the attacks on the World Trade Center and the Pentagon, the Wall Street Journal published a Page 4 analysis of how the outbreak of terrorism in the U.S. might result in a crackdown against "America's homegrown radicals ... members of the burgeoning antiglobalization movement." The hopeful tone of the article was unmistakable, though the writer never bothered to spell out how tree-hugging environmentalists and Starbucks-defacing graffiti artists equate with murderous, suicidal hijackers.

Two questions will loom large in the coming weeks. The first: Whither Generation Y now?

Rudely awoken, will this now-alert giant listen to the beating of the war drums, parrot the ubiquitous television commentators' jingoism, applaud the bloodlust of the hawks; buy the benefit single that's being planned by the pathetically lapsed King of Pop, Michael Jackson; and be conned once more by the Viacom-owned MTV? (Speaking of logos, the cable music giant has turned its symbol into a waving flag, which appears in the corner of the screen through all its programming, including regular showings of "Overcome," a video by the ridiculous fourth-generation grunge band Live that, according to its spokesperson, "is dedicated to the tragedies' victims." It also helps hype an album that's due out on Tuesday.)

Alternately, will the masses of young America start thinking about the political movement that has been embraced by some of their peers? Will they begin to seriously question the substantive problems facing America and the world, challenging the unilateral foreign policies and the global corporatization that are clearly a part of what provoked the reprehensible actions of Sept. 11? (There's a third possibility, too, and that's that absolutely nothing will change and everybody will go right back to ringing up credit-card debt -- which in some ways would be even more awful than the warmonger option.)

Make no mistake (as our president is so fond of saying): Only an idealist who's even more hopelessly naive than the hardest-core holdover from the Age of Aquarius could think the Generation Y will actually affect what is about to go down. How Bush's "war on terrorism" plays out will be determined by the top-level power struggle that's currently being waged between the old-line military-industrial hawks that Ike famously warned us about and the new forces of globalization, epitomized by the split between Cheney/Rumsfeld on one side and Colin Powell on the other. (I'm betting on Powell and the corporations -- war is very, very bad for business, and in the new millennium, business is everything. You'll notice that W. hasn't started bombing anyone yet, and that can't possibly be because of Christian restraint.)

So no, Generation Y won't control world events -- at least not yet. But that brings us to our second question: What sort of an impact can we expect the indelible images of Sept. 11 to have on popular culture, especially rock 'n' roll, which, four generations of commodifiers be damned, is still the last great bastion of "truth" in popular culture?

At its best, rock has always given the finger to the self-important forces of the reigning hegemony. The music first sprouted as a race-mixing juvenile delinquent scourge on the otherwise picture-perfect '50s. It blossomed at the height of an unjust war in the '60s; was rejuvenated by punk during the recession of the mid-'70s, and flowered again with indie rock and hip-hop during the cultural conservatism ushered in by Reagan, trickle-down economics and AIDS in the mid- to late '80s. That wonderful fuck-you spark has been missing for some time now -- it was muted at best during the alternative era of the early '90s, as Gen X's antiheroes struggled with an irresistible penchant for irony and their own ambivalence toward stardom (cf Nirvana and Pearl Jam). Some would have us believe that it was buried for good along with the generation gap at the dawn of this new century -- that it is now safe enough to permanently enshrine in a Hall of Fame in Cleveland and chart through VH1's "Behind the Music" in neat 30-minute segments that all seem to have identical plot lines.

But if we accept that at least some of the enduring music of the Woodstock Nation was inspired by the anger of young women who saw babies being killed in their mothers' arms and the fears of young men reluctant to get their butts blown off in Southeast Asia for a cause that no one could explain, what kind of soundtrack will be produced by the sudden awareness that -- regardless of age, sex, race or class -- random annihilation at the hands of an unseen enemy can arrive almost anywhere and at any time? And that the enemy, partly produced by American arrogance in the first place, is being fought with nothing more than another dose of that same arrogance, a whole lot of brute strength and bushels of money?

Jim DeRogatis is the pop music critic at the Chicago Sun-Times. He is the co-host of the radio show "Sound Opinions" and the author of "Let It Blurt: The Life and Times of Lester Bangs, America's Greatest Rock Critic." His Web site is www.jimdero.com.