The director of "High Fidelity" commands a nuanced tale of a small man consumed by fascism. It's what "Angela's Ashes" should have been. 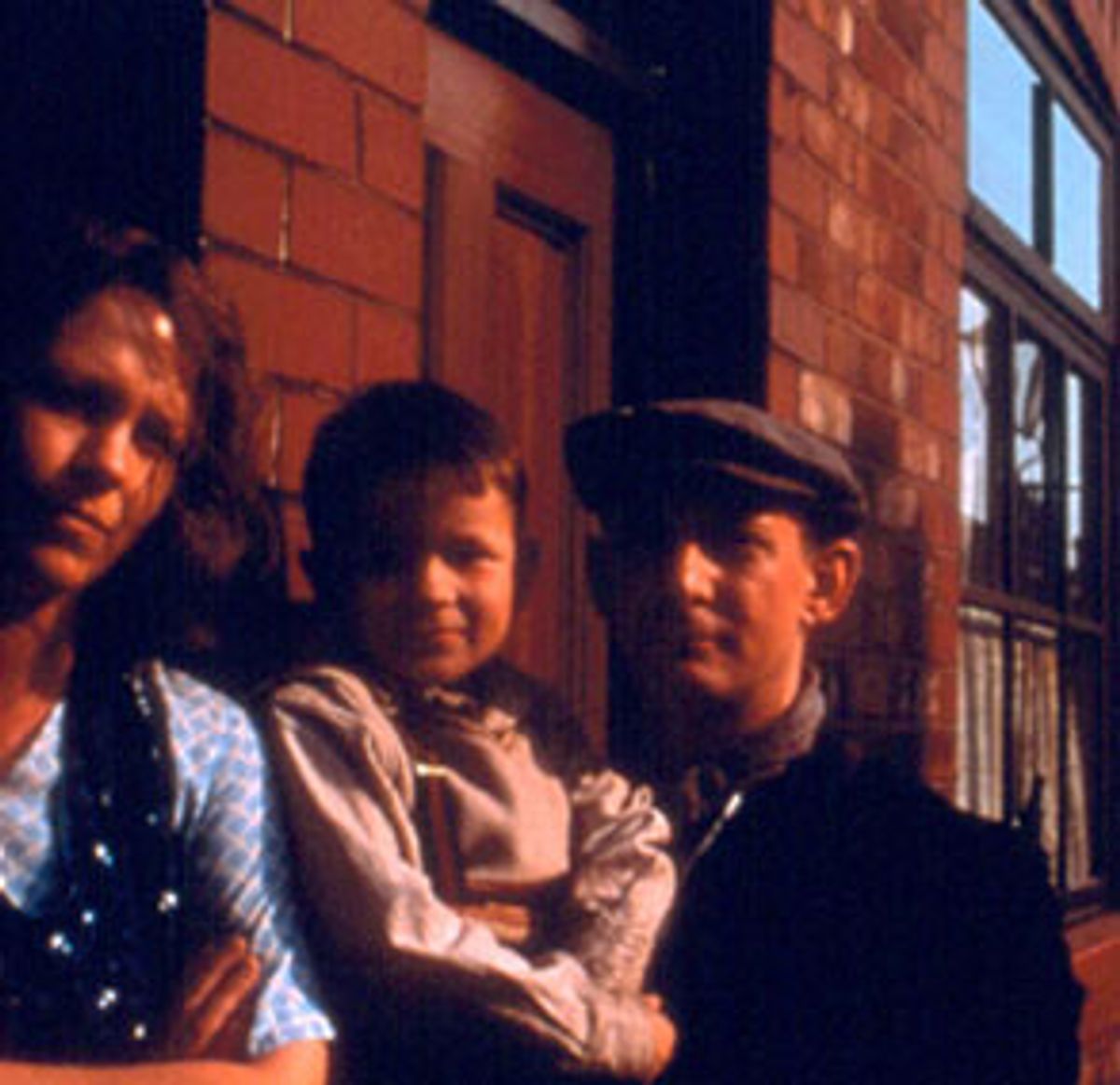 If the British actor Ian Hart hasn't won the acclaim he deserves by now, it may be because he's too good. There are actors, and Hart is one, who immerse themselves so thoroughly in each role that they appear to be not so much acting as simply existing on the screen. It's such a self-effacing way of working that audiences may not realize they've even seen Hart before.

Since he started making movies in the early '90s Hart has played characters ranging in age from their late teens to near 40. And though you can identify similar mannerisms in the performances -- a vocal delivery that can be pointedly direct or tremulous, a gaze that is both accusingly straightforward and birdlike -- you can't be surprised if moviegoers don't connect his John Lennon (a part he first played with cutting sarcasm and raw vulnerability in Christopher Munch's "The Hours and Times"), to the gay lover of a doctor in "Hollow Reed," to a shabby little detective in "The End of the Affair." Hart's versatility continues later this week in David Kane's "Born Romantic," where he plays a sullen cab driver, and currently in Stephen Frears' new film, "Liam"

In "Liam," set during the Depression, Hart plays a Catholic Liverpool shipyard worker who loses his job and slowly turns to fascism. It's a real test for an actor, making us sympathize with a man who comes to believe in something repugnant. Hart never makes the mistake that actors playing fascists or bigots often do; he doesn't distance himself from the character as a way of registering his disapproval. (That's a compliment to the audience; he doesn't assume we're so dimwitted we need to be told that fascism is bad.) And Hart doesn't aggrandize the hatred that eats away at this man to turn him into the embodiment of evil. Without condescending to him, Hart never forgets that this is a little man, ordinary and bedeviled by recognizable concerns. He's worried about providing for his family and probably suffers from the same thing that hounded many men in the Depression: the inability to see that their hard luck wasn't due to their own failings.

Hart plays a man whose self-respect is flaking off like old paint, leaving every nerve raw and exposed. The exchanges between him and the brilliant Claire Hackett, who plays his wife, bristle with the barely repressed tension of people who know each other too well. He's the breadwinner but she's the backbone, fierce and careworn at the same time, and though she doesn't mean it, you know why every time she asks him, "What will we do?" he experiences it as a reproach.

Hart's character, who is not given a name, tries everything he can to get by, even sucking up to the boss who hands out the daily work chits by standing the fellow a pint that comes out of his family's precious little cash. When, just for the sheer pleasure of exercising his power, the man passes him over the next day, Hart, unable to control himself, spits in his face. The only way he's able to not feel like a victim is to identify people he imagines are responsible for his plight: the Irish immigrants who will work for cheaper wages, and Liverpool's well-heeled Jews who own many of the city's businesses, including the pawn shop his wife uses to make ends meet and the tailor who makes the suit for the first communion of their little son Liam (Anthony Burrows).

He's not worldly enough to realize that, for some of Britain's upper classes, the appeal of fascism was keeping men like him -- and Irish and Jews -- in their place. So his tragedy is that embracing this new ideology separates him from people who aren't in much better shape than he is, like the Irish neighbors with whom he celebrates New Year's Eve and then, a few months later, tells to get out of his country. It's a downhill trajectory that -- logically -- culminates with his separation from his own family.

"Liam" is a small-scale, modest film, but it's more satisfying and affecting than some of the more ambitious or highly touted pictures that have appeared this year. It's been beautifully made with tact and care. Andrew Dunn's cinematography and Stephen Finneran's production design poeticize the potentially drab settings: the local pub and shipyard, the classroom of the Catholic school Liam attends and, most of all, the family home. The entire film is bathed in a gaslit glow that makes you aware of the bonds of family and neighbors as a fragile defense against the darkness that hovers at the edges of the frames. Kristina Hetheringtom's editing shifts the action gently from locale to locale, often linking scenes by allusion, like a cut from Liam hearing about the fires of hell in his catechism class to the boy staring at the fire around which the sacked shipyard workers gather.

Most of all, "Liam" shows Stephen Frears working at close to the peak of his talents. It's a richer film than Frears' last, his terrific version of Nick Hornby's novel "High Fidelity," but taken together they make up his best work since "The Grifters." In "Liam" he's lucky enough to work from Jimmy McGovern's delicate and nuanced script, which really allows him to show off how good a director of actors he is. The movie unfolds episodically and the details seem chosen for their ability to convey meaning with a conciseness that does not shortchange their emotion. In one moment, the family's middle child, Teresa (Megan Burns, whose face is heartbreakingly open), who works as a housekeeper for a wealthy Jewish family, cleans up after their dinner, and we know exactly what it means to her to scrape their uneaten food into the garbage. There's a lovely moment at the beginning as the neighborhood children press their faces to a pub window on New Year's Eve for the pleasure of watching their parents dance and sing.

It's 8-year-old Liam, big-eyed, watchful and, due to a persistent stutter, mostly silent, through whose eyes we see the action. The emotional pain, and a good deal of the comedy, of the film comes from our ability to comprehend what Liam is too young to understand. He's used in a manner similar to the young boy in "Yi Yi," an observer who takes in everything around him without being able to fully process it. Anthony Burrows is so good he can be painful to watch. Stamping his feet in frustrated fury as he struggles to get out words, he conveys all the balled-up emotion that his family's straitened circumstances give him no room to express. He's a deft comic as well. When he steals a glance at a Vermeer nude, it's the promise of luxury in the artist's creamy depiction of flesh that holds as much attraction for him as the nudity itself. And when he accidentally sees his mother rising naked from the bath (a beautifully composed shot) it sends him into paroxysms of guilt and fear: He worries that his mother is deformed because, unlike Vermeer's demure apparition, she has hair covering her privates.

Liam is finally set straight by the local priest. That priest and Liam's terror of a teacher (Anne Ried) are often funny (especially when they tell their charges that sin "drives the nails deeper into the hands of Christ"), but you don't often feel like laughing. McGovern's script is ruthless about the way these petty tyrants use Catholicism to exercise their power. There's nothing of love or mercy in the religion they teach, just hardship and shame, barely leavened by the promise of redemption, a possibility that seems as likely to these kids as finding a chocolate bar in their lunch.

It's not just the Depression that has the characters here by the throat -- it's the Church. We see Claire Hackett barely able to keep her dignity intact when the priest has the audacity to make her feel less than devout for not making her weekly tithe. And when, at Liam's first communion, the priest compliments the boys and girls on how nice they look in their new clothes, it's more than Liam's dad can take. His son's new suit has been left in the tailor shop because the family can't afford it. Rising to his feet in church he challenges the priest, asking him if he knows how families have to scrimp because new clothes are expected at first communion. The scene tears you up. He's absolutely right, but you feel the shame he's bringing on his wife who has tried to make Liam presentable, and on the boy himself. And then McGovern and Frears twist the scene even further when Hart goes on to blame the Jews for their poverty, and we understand we are watching a man putting himself in an indefensible position.

That neither Hart, nor the filmmakers, nor the audience ever stop feeling for this man, despite his foolishness and bigotry, is a measure of the enormous empathy that belies the film's small size. This is the movie that "Angela's Ashes" should have been, might have been if the filmmakers had realized that the key to that book was not just the story but Frank McCourt's voice. "Liam" is a devastating movie, but it's never a downer. When a movie is as sensitively made and gorgeously acted as this one is, the ability to be devastated feels like a gift.