After Sept. 11, conservatives call again for drilling in Alaska -- but environmentalists say the real danger is our addiction to oil. 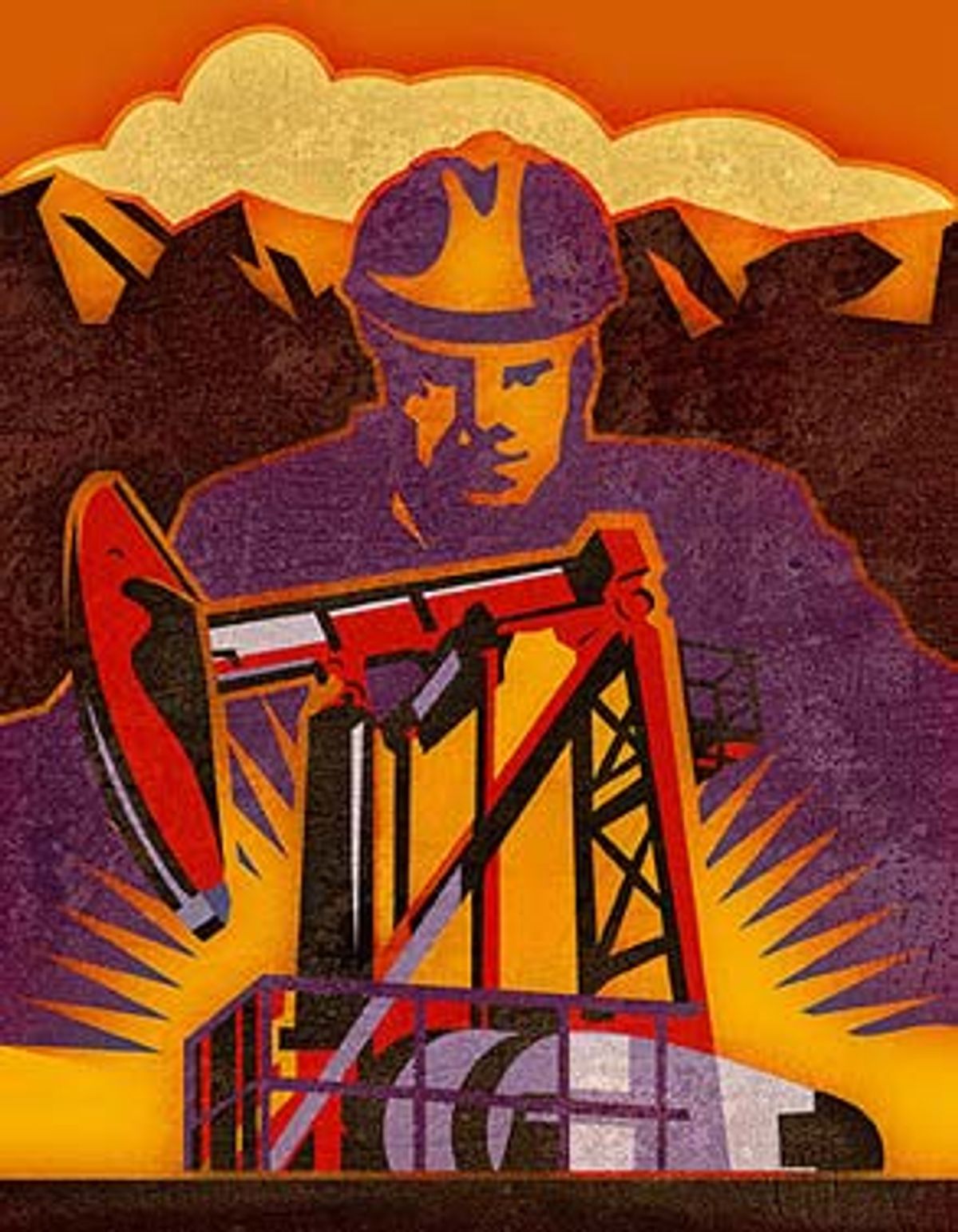 Sen. James Inhofe, R-Okla., took the Senate floor Monday and proposed two energy-related amendments to the defense bill now wending its way through Congress. Both aimed to tack on hundreds of pages of energy legislation and give oil companies permission to drill in Alaska's Arctic National Wildlife Refuge (ANWR). With the nation preparing for a long, difficult war on terrorism, Inhofe argued, domestic control of energy -- gained in part through Alaskan drilling -- must become a priority.

Few would disagree that foreign energy dependency is dangerous. Since the world's first oil shock in 1951 -- when Iran nationalized its oil fields and drove prices up by halting production -- American energy policy has focused on minimizing the damage that foreign oil exporters could do to domestic interests. But if Inhofe hoped to secure quick passage of a conservative energy agenda by making it a subset of defense, his hopes have already been dashed. The Senate's Democratic leadership and even Sen. Frank Murkowski -- the Alaska Republican who strongly favors drilling in ANWR -- are now calling for Inhofe to drop the amendments.

Defense should be handled on its own, they argue. With oil prices continuing to drop on fears that a global recession has just begun, energy policy can wait.

"Clearly we need to have a discussion about energy policy, and that debate will take place," says Kelly Moore, press secretary for Sen. Joseph Lieberman, D-Conn. "But now is not the most appropriate time to do that."

And yet, even if Sen. Inhofe's attempt to fuse energy with defense amounts to what economist Paul Krugman calls "opportunism," his action has clearly reshaped the contours of the energy debate. Before Sept. 11, ANWR was an environmental issue. It was a question of global warming, smog and caribou on one side vs. the need to feed Americans' insatiable hunger for fuel on the other.

Now, the debate over ANWR centers on security. Those who favor drilling have started treating Alaska's oil fields as a key source of energy for the military and as a potential buffer to influence and instability from the Middle East, where an estimated two-thirds of the world's oil can be found. But environmentalists are also playing the security card, arguing that drilling in Alaska carries with it its own unsustainable risks. Extracting oil or natural gas from ANWR will require the extended use of the 800-mile Alaskan pipeline -- a pipeline that has been attacked before and that is, in the words of one expert, "indefensible."

The old arguments over land, animals and jobs are still relevant, both sides maintain. But now, even without prices rising at the pump, they've been pushed to the background. National security concerns dominate; the terrorist attacks, the ensuing war on terrorism and the attempt to protect against future disruptions of American life have become the lens through which political issues are seen. Not even the faraway wilderness has managed to avoid the country's new and defensive gaze.

Inhofe may be "taking a beating" as one Senate staffer put it Tuesday, but he's not the only one treating ANWR as a military necessity. Some war strategy experts argue that President Bush's war on terrorism (now called "Operation Enduring Freedom") requires secure oil supplies that only domestic production can provide.

Contemporary warfare is more energy intensive than ever before, says Milton Copulos, a former energy advisor to Presidents Reagan and Bush Sr. who is now president of the National Defense Council Foundation.

"We tend to think that World War II was a highly mechanized war," he says. "But actually, we used 582,000 troops in the Gulf War and they used twice as much oil as all the entire 2 million-man Allied Expeditionary Force that liberated Europe. We used eight times as much oil per soldier as we did during World War II."

Copulos' figures may not stand up to scrutiny. The Gulf War strategy employed fewer men and more aircraft than just about any war, making any troop-to-oil ratio seem especially energy intensive.

Still, Copulos' main point seems valid: A far-flung war on terrorism will require more fuel than even the Gulf War did. The expected "rapid deployment" of commando forces, often into areas without U.S. bases, threatens to increase the military's demand for oil. As Copulos puts it: "There's a changing foundation of war, and it's very energy-intensive."

Thus, Copulos and others argue, domestic production is more important than ever, because Persian Gulf supplies could easily be threatened. So far, that hasn't happened. Crude oil prices have dropped by about 25 percent since the Sept. 11 attacks. And OPEC, the consortium of oil-producing countries that controls 40 percent of the worldwide market, has promised to keep prices steady and to support U.S. military efforts. But nine of the group's 11 members have populations that are overwhelmingly Muslim, who may not view kindly an energy policy that kowtows to a country led by a president who has already called for a "crusade" against terrorists.

The Persian Gulf region's problems have already created six worldwide oil crises since World War II. Along with the 1951 shock in Iran and the two well-publicized crises in 1973 and 1979, trouble in the region radically spiked prices in 1956 (caused by the Egypt's decision to nationalize the Suez Canal), and in 1967 (during Israel's Six Day War with Egypt, Syria and Jordan).

The collective problems have encouraged American policy to veer away from the Arab world. Now, the vast majority of U.S. oil imports come from the Americas (Canada, Mexico, and Venezuela are among the United States' biggest suppliers).

But the oil markets can be spooked by activity anywhere in the oil-producing world, and prices are notoriously sensitive to disruption. During the shock of 1979, actual oil supply only fell by about 5 percent but prices more than doubled -- costing the U.S. about $2 trillion.

Panic overcame logic, a common occurrence in the world of oil pricing, says Bob Ebel, directory of the energy program at the Center for Strategic and International Studies, a defense think tank. "There's a large portion of the oil price that's psychological," he says.

Even environmentalists agree that the combination of oil-market psychology and foreign dependence is problematic. "This crisis proves that we need to break our dependency on foreign oil," says Andrew Kimbrell, a well-known environmental attorney and executive director of the Campaign on Auto Pollution, a coalition of 500 groups that aims to make transportation more environmentally friendly.

"When we're overdependent on one source of energy, that's when the U.S. can be held over a barrel," says another conservation advocate.

But if foreign dependency is the primary problem, shouldn't environmentalists give up their opposition to drilling? Doesn't the effort to stop domestic production in Alaska -- the country's richest oil region -- push the U.S. back into the arms of countries like Iraq?

Absolutely not, according to environmentalists. They take the long view, arguing that more drilling would only encourage Americans to believe -- falsely -- that oil is a dependable resource.

"We need to recognize that the fossil fuel age is coming to an end," says Kimbrell. He notes that some scientists are saying that world oil production will start declining in less than 10 years: "We need to focus our future on renewable energy," he says. "And we need to hurry up."

By supporting oil exploration, government would be going in the wrong direction, says Dan Kammen, director of the Renewable and Appropriate Energy Laboratory at UC-Berkeley. It wouldn't lead to less dependency, but rather, more. "If you support drilling, you're saying that we'll continue to favor oil and give the Arab states the upper hand," he says. "The idea of drilling in ANWR doesn't make sense."

There is an instructive historical parallel. After the 1973 oil embargo, Congress passed legislation that allowed for the creation of the Trans-Alaska Pipeline, which vastly increased the amount of oil that could be pumped out of the area. But, as Inhofe correctly pointed out, U.S. dependency on foreign oil only increased. During the '70s and early '80s, the U.S. imported less than 30 percent of its oil from abroad. Last year, about 52 percent came from foreign fields.

Since drilling won't end dependency, environmental scientists argue, Congress should start focusing on other supply-side solutions such as fuel cells, which run on hydrogen, and solar power. Demand-oriented solutions must also be considered. Forcing automobile manufacturers to make cars more fuel-efficient, for example, should be a priority. President Carter started doing this in the '70s but political resolve died off in the '80s and '90s.

"Today's average mileage is about the same as it was 13 years ago," says Richard Hirsh, a technology studies professor at Virginia Tech and the author of "Power Loss: The Origins of Deregulation and Restructuring in the American Electric Utility Industry." "And with all the SUVs on the market that get under 20 MPG, the overall gas mileage of auto manufacturers has slipped," he says.

But if cars got an average of 45 MPG (with light trucks getting 34 MPG), oil demand would diminish by about 2 million barrels a day, according to the American Council for an Energy Efficient Economy.

Krugman, an economist with expertise in international trade, says that the U.S. shouldn't focus only on reducing its own dependency on oil. "As leader of the advanced world, the U.S. has to worry about energy dependence in Europe and Japan too," he says. The entire world, he argues, must find a way to wean itself from oil.

Renewable energy sources, increased mileage requirements -- those are the old arguments. Intriguingly, the environmentalists are demonstrating that they can be just as opportunistic as the conservatives. These days, if you ask environmentalists why they're opposed to drilling in Alaska, the first thing they mention is security.

In the immediate aftermath of Sept. 11's terrorist attacks, the green movement largely kept quiet. Even the usually critical Sierra Club called for unity, pulling down content on the Web that criticized White House policies and agreeing to temporarily "cease bashing President Bush." But now the movement has found a new battering ram.

The pitch, sent in letters to congressional lobbyists and received by the media, can be boiled down to one refrain: The pipeline isn't secure. It runs over rugged terrain, can be easily seen from the air and its 24-year-old infrastructure is already weakening. Last year, the pipeline suffered at least three accidents, including one that nearly blew up a major oil terminal.

"It's the most vulnerable link in America's energy supply today," says Amory Lovins, founder of the Rocky Mountain Institute, a nonpartisan environmental consulting company. "Doubling our dependence on it, in terms of time and the amount of fuel that flows through it, is a terrible idea from a security perspective."

The pipeline has already suffered attempted attacks before, including one that was foiled two years ago when "a disgruntled Canadian machinist planned to blow up 14 points on the pipeline so he could profit from oil futures trading," Lovins explains. "And he's a benign danger compared to what we're dealing with now."

Those who favor drilling consider the security argument to be specious. Chuck Kleeschulte, a spokesman for Sen. Murkowski of Alaska, points out that renewable sources such as solar energy use about 30,000 miles of transmission that could also easily be targeted. Transportation of energy is unavoidable; focusing on the pipeline's security, the argument goes, obscures the paramount issue, the need for more oil drawn from American soil.

Though Inhofe's amendments are "inappropriate at this time," Kleeschulte said, "Sen. Murkowski still believes that energy is a national security issue."

With both sides now harping on this aspect of the issue, Congress will be hard pressed to disagree.