This English charmer is actually funny and romantic -- and it won't make men run out of the theater. 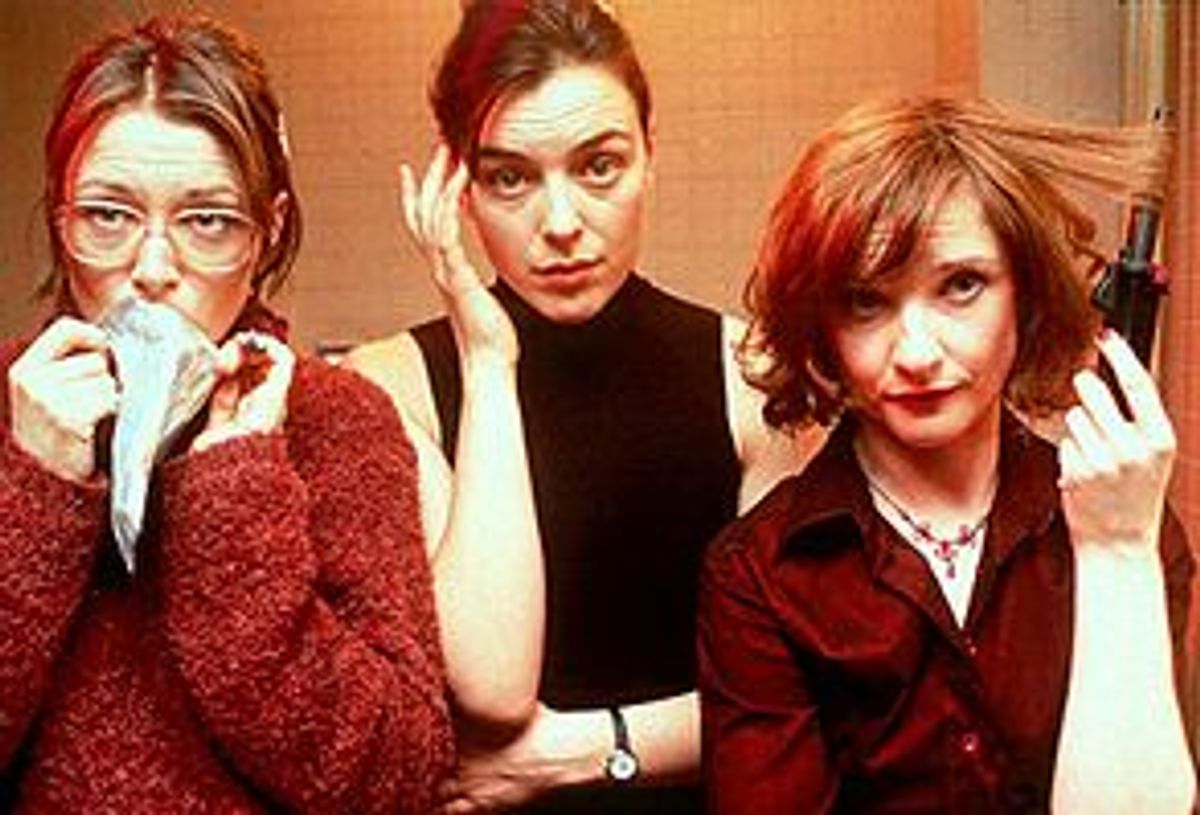 "Born Romantic" is the first contemporary romantic comedy I've seen in years that feels as if it's made by a real human being for other real human beings, and not for the android constructs that most movie studios seem to think we are. Its writer and director, David Kane, made a terrific romantic comedy in 1998, "This Year's Love." A hit in the U.K., it was never even released in the States. "Born Romantic" is an even more beautifully rounded picture, the work of a young director who is only just beginning to hit his stride. He's the great hope of romantic comedy.

Part of the problem with most contemporary romantic comedies is that they're so specifically geared toward women (and again, not necessarily toward real, thinking women but toward the "woman" composite that Hollywood has pieced together over years of market research) that they forget that men are part of the equation. These movies have earned the nickname "chick flicks," a term often used derisively by men who hate to be dragged to them and with giggling self-deprecation by women who find themselves drawn to them, even when they know they're only going to be disappointed.

Yet I hear from almost as many men as women who set out with great trepidation to see each new promising romantic comedy, only to come home feeling cheated and sold to. I can only see it as a failure of the directors who've mined the genre so ruthlessly, from the high grand priestess of the lousy chick flick Nora Ephron ("Sleepless in Seattle," "You've Got Mail") to Garry Marshall ("Runaway Bride") to Roger Michell ("Notting Hill").

The great strength of "Born Romantic" is that it never goes out of its way to tip its hand, never even suggests that this might be the kind of movie that women have to talk their boyfriends or husbands into seeing. From the first frame Kane works off the assumption that men will be as interested in this story as women will, and his confidence launches the movie into a joyous orbit. This is an ensemble comedy: Three sets of lonely young Londoners attempt, with heroic awkwardness, to pair off. There are also three "extra men" who serve as a sort of Greek chorus for the romantic follies of the others. Kane is working with terrific actors here, but he's clearly the kind of director who, instead of simply bringing out the best in them, works a spell on them so that they draw the best out of one another. Like those old-time Ed Sullivan performers who could keep a dozen plates spinning at once, Kane gives each story and each character the right amount of care and attention. It's the best kind of ensemble directing, the same knack we've seen (albeit put to very different uses) in filmmakers like Robert Altman and Paul Thomas Anderson.

A Brixton salsa club is the home base in "Born Romantic"; it's the place all the characters gravitate toward on the way to finding their truest, best selves. The movie revs you up during its opening credits, showing us mismatched and yet perfectly paired dancers, a racially mixed group of people who spin and swerve and gently touch as if it were both their greatest comfort and their deepest joy simply to inhabit their own bodies. Their clothes don't mark them as members of any unified social stratum: Some wear jeans and old but nicely pressed shirts; others are dressed to kill in slinky dresses and slender, tapered heels.

"Born Romantic," set in a variety of hip-looking but decidedly unglossy London neighborhoods, is joyously indifferent to the issues of class. The dancers we see in the opening credits are technically just extras, but they feel integral to the movie, a visually captivating introduction to the central characters we meet later. In David Kane's movies, no one is a type; these are people we might like to be, not because they have the right jobs or clothes or laptops or sports cars, but because they go about the business of living their messy lives in ways we recognize.

Kane doesn't make screwball comedies -- his sometimes wicked humor is gently controlled instead of uproariously looped and dotted -- but the quiet calamities his characters find themselves in do have a distinctly urban craziness to them. Frankie (Craig Ferguson) is a mopey-eyed Rat Pack aficionado, the kind of guy who swoons around in an artfully disheveled suit even though he has no job, who's just looking for his own classy lady. He has the misfortune to fall for Eleanor (Olivia Williams), a crisp brunette who spurns his first advance at the club by informing him that she only dates men with symmetrical faces: "No offense, but you don't have a symmetrical face, and I don't have time to waste."

Fergus (David Morrissey) is one of those musicians who's perennially being kicked out of bands and justifying it by claiming his bandmates were cramping his style. He has decided he's still desperately in love with his first girlfriend, the effervescently prickly Mo (Jane Horrocks), whom he cruelly jilted years earlier. He has no idea where she lives or what's become of her, so he embarks on his mission to find her by plastering a Xerox of her face all over town, emblazoned with the legend "Have you seen this woman?" followed by his phone number.

And then there's Jocelyn (Catherine McCormack), a gangly oddball beauty who slouches behind giant bug eyeglasses and struts about with hunched-up shoulders that make her look more cheerful than defeated, as if her very awkwardness were just a funny dance. She tends graves for a living, carrying Polaroids of each and every one of her charges on a key ring, and delights in informing friends and acquaintances all about germs. When the shambling, sloe-eyed Eddie (Jimi Mistry) meets her in the club, he's smacked silly by her beauty -- well, eventually, anyway. Meanwhile, he steals her wallet. Wouldn't you?

You might not, but Kane knows that there's no explanation for the things people do when they find themselves struck by love. He rounds out his cast of characters with two cab drivers, played by John Thompson and Ian Hart, who wile away their off-duty hours gabbing about women. (Hart, a consistently marvelous actor, plays a woman-hating crank who manages to be both funny and touching.) And a third cab driver, Jimmy (Adrian Lester), is the one who plays the biggest role in bringing together each of the three hapless couples (Lord knows they need all the help they can get). He squires them all, individually, to and from their homes, talking to them, finding out their secrets. We learn from the magazines that he reads in his off-duty hours that he's a photographer, and the way he scrutinizes each character in the rear-view mirror as he's driving, it's as if he's capturing each face with his own internal camera.

Lester has something of a supernatural role here -- he's like a velvet-voiced guardian angel in dreads -- but he dries out any potential sappiness before it even has a chance to spill. Jimmy advises each of his troubled charges well, but there's a toughness about him that suggests he's pushing his own heartaches to the back of the cupboard. Jimmy is the hub of the movie, the character who has the whole mad, romantic scheme figured out in his head; he's just waiting for the last crucial part of it -- his own -- to fall into place.

Kane's plot rolls along at a clip; he unfurls a few lengths of each character's story before skipping off to another, and his well-orchestrated restlessness means that his movie isn't boring for a minute.

"Born Romantic" is a double treat, a picture whose smaller pleasures nestle comfortably inside its larger one: It's well-conceived as a whole, but Kane's love for each character (even, or maybe especially, the surly cab driver Hart) makes for a movie that's deeply satisfying moment to moment. Kane's London is a city of all colors and no color: Eddie looks Pakistani, but his father is white. In Kane's world -- the world most of us would like to say we live in -- that's the kind of random fact that doesn't need an explanation. (Remember, there were plenty of critics who made note of the fact that Jeff Goldblum's character in "The Lost World: Jurassic Park" had an "inexplicably" black daughter -- as if the way we live our lives or fall in love needs to be explained if it should blur outside the expected parameters.)

Kane's approach is so light that it makes us forget that class and racial distinctions even exist. I don't know who, if anyone, has been signed on to direct the movie version of Zadie Smith's immensely likable comic novel "White Teeth," but I nominate Kane: He's one of few directors I can think of who could do justice to Smith's omniracial sensibility.

Most important of all, though, "Born Romantic" is a movie about love and the willingness to dance close, even if it means risking awkwardness. It's about secrets that are passed palm to palm, or in the way a man gives his partner the space to twirl in a perfect spiral. But it's also about the clumsy secrets we don't mean to give away, the ones telegraphed through bumping elbows or trampling on unsuspecting and completely innocent feet. Dancing, like being in love, sometimes means making a mess of things. "Born Romantic" makes glorious sense of that mess, trampled toes and all.