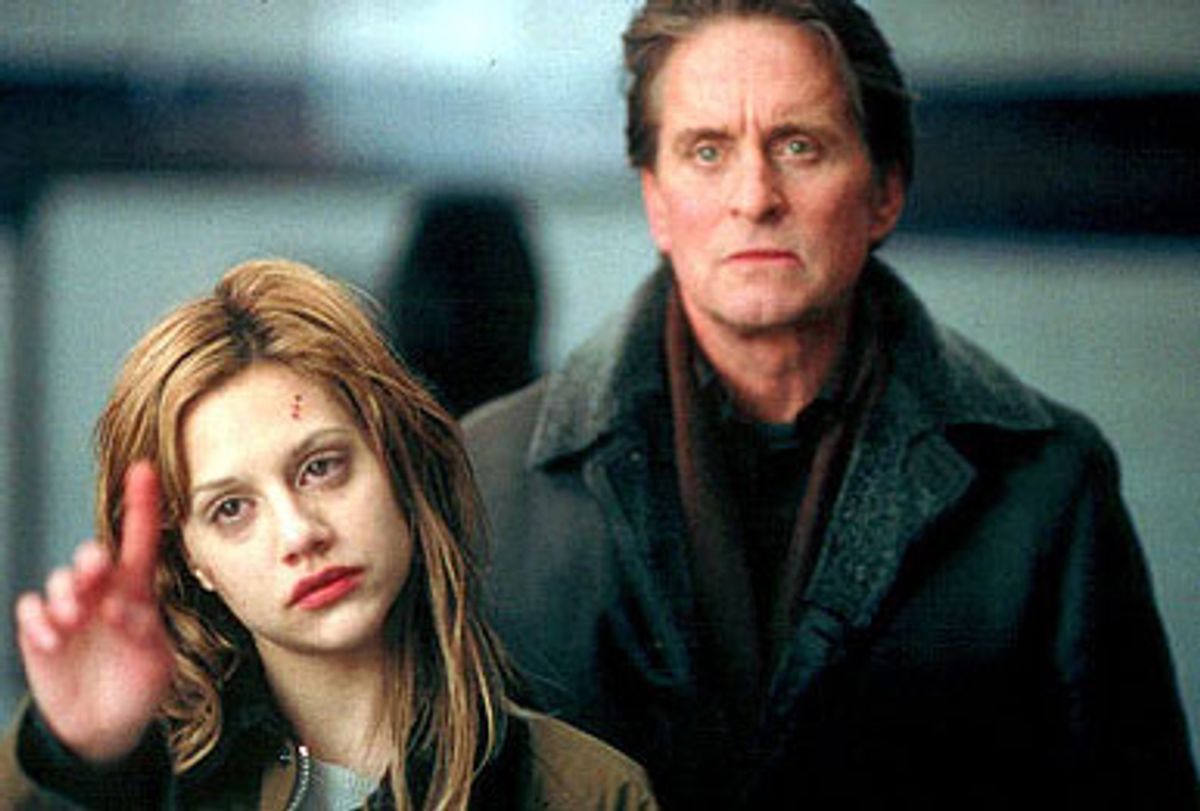 Is 20th Century Fox out of its fucking mind? In the climax of the new Michael Douglas thriller "Don't Say a Word" (here comes a spoiler) a man is thrown into a pit and then buried alive under dirt and debris when a structure collapses. As I watched that at a Times Square multiplex last week, it was impossible not to be sickened, thinking of the more than 6,000 New Yorkers lying dead under a pile of debris a few miles down Broadway. An opening scene of a car bomb exploding on the streets of Brooklyn made me flinch. But the burial was much worse. I was sitting with a group of colleagues who have all pretty much become used to Hollywood callousness, and I think it's fair to say we were stunned. But it wasn't just us. You could feel the entire audience at the sneak preview drawing back from the screen.

It may be just the wish for good P.R. that has prompted Warners to postpone the new Schwarzenegger thriller "Collateral Damage," Columbia to pull a "Spider-Man" trailer where a helicopter is trapped in a web between the Twin Towers and Paramount to delay the new Edward Burns comedy "Sidewalks of New York" and remove the World Trade Center from the movie's poster. But whatever the motive for these decisions, they all show an awareness that people are emotionally scraped right now. Businesses big and small, not just movie studios, are taking huge and in some cases disastrous financial hits. Are the folks at Fox so eager to make a few bucks that they think no one will notice if they just conduct themselves as if it were business as usual?

With new releases six to nine months down the road in the can, the change that's now inevitable in American movies won't be obvious for a while. But I can't see how it won't come. Of course we will be getting propaganda. That's what Hollywood does in a war. But propaganda can take many forms. And it could be that even serious violent movies, even good action movies, will have a hard time. What seems destined to change is the assaultiveness of American movies. I don't think it's just insensitivity that has led critics to accept that assaultiveness as a matter of course. You don't want to treat bad movies with more weight than they deserve, and cool dismissal is often preferable to indignation. But indignation doesn't preclude reason and now it's hard not to notice the level of noise and mayhem we've all taken for granted. Three days after the bombing I went to the movies and saw a preview for a new Disney sports movie that included a close-up of a baseball hitting a chicken wire backstop. What I might not have even registered before was that the noise of the ball hitting was amplified to the level of an explosion. And I sensed the people around me, who had gone to a movie for two hours to tune out the news and the sound of jet fighters patrolling overhead, feeling a little jumpy.

It seems beside the point to complain that "Don't Say a Word" is a stupid, brutal and nonsensical picture. Based on a novel by Andrew Klavan and directed by Gary Fleder ("Kiss the Girls"), the picture is about a tony shrink (Michael Douglas) whose daughter is kidnapped by thieves trying to get a clue to stolen loot they were double-crossed out of. The secret is in the head of a disturbed, institutionalized girl (Brittany Murphy, doing what she can to resist the urge to chew the scenery, as most actors do when playing a crazy), and Douglas has to use his skills to unlock it. Why, given that scenario, the head bad guy (Sean Bean, hawk-nosed, glowering and mightily dull) refuses to give Douglas the clues he possesses to the girl's background makes no sense. Especially when it becomes clear he doesn't plan to let Douglas live. And when Douglas' wife (Famke Janssen -- as the woman behind me said, assigned the now stock role of assuaging Douglas' mid-life crisis) smiles welcomingly to Brittany Murphy in the climax, you wonder if you missed the plot development where Janssen became clairvoyant. There's no other way for her to know who Murphy is. And how in God's name do baddies just two weeks out of prison set up a scheme that involves video surveillance in every nook and cranny of Douglas' apartment?

If "Don't Say a Word" were more effective instead of shoddy it might be a great example of how content and coherence have been sandpapered away in American movies in favor of sensation. It's not the idiotic plot that matters here, it's the beatings, the autopsy scenes and photos, the shootings, the people who have their heads slammed into walls, the woman already under awful emotional stress who is nearly strangled with a cord before she has to stab her attacker to death. Those moments are the raison d'être of "Don't Say a Word."

I may be wrong and the movie could be a hit, a way for people to let off steam and believe that the bad guys will be defeated. But everything has been put into a new context, and except for its ability to disgust, "Don't Say a Word" arrives as a fossil. We don't have to go to the movies to feel beaten up anymore.