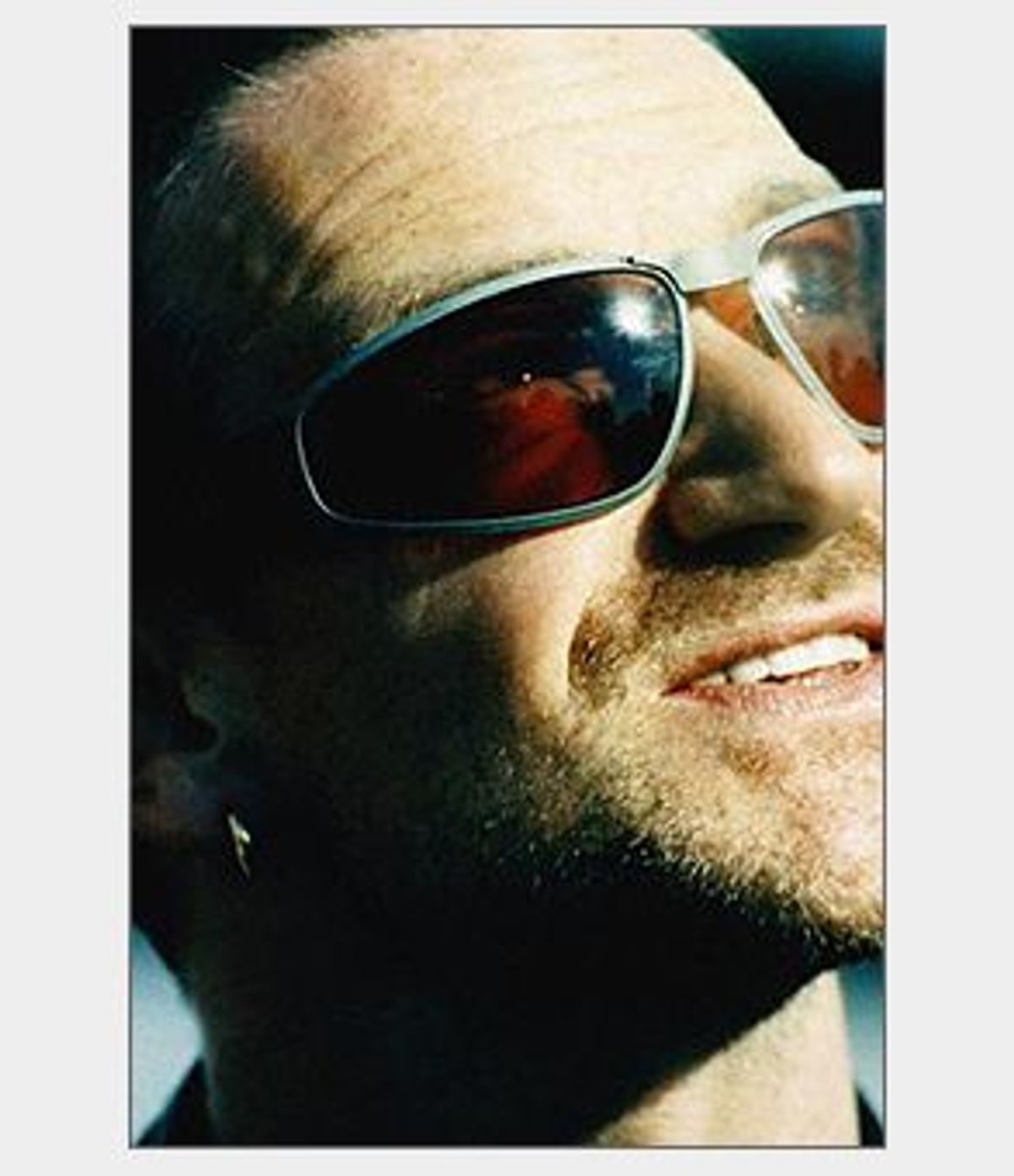 In June, Bono of U2 delivered the commencement address to graduating students at Harvard. Before sharing his thoughts about AIDS, Africa and Third World debt, the legendary singer began with an Alcoholics Anonymous-style confession: "My name is Bono, and I am a rock star."

At 41, Bono is at an age when many rock musicians start exploiting bygone successes to keep feeding at the trough of fame. But with Bono, it's more than a rock 'n' roll career. Behind the black leather togs and wraparound shades, there has always been an earnest social crusader. Embarrassingly earnest? Perhaps. But, oddly, that's part of his charm. In a business where people sell their souls for success, he has constantly risked celebrity-cause cliché -- and he knows it. "The only thing worse than a rock star," he told the starry-eyed Harvard grads, "is a rock star with a conscience. I've seen great minds and prolific imaginations disappear up their own ass, strung out on their own self-importance. I'm one of them."

But as we accept the notion that the horrific attacks on the Pentagon and World Trade Center on Sept. 11 have changed our world irrevocably, Bono looks better than ever; his earnestness suddenly feels a lot less corny. It's not to say that he has all the answers, but once again celebrities who crusade have less reason to fear ridicule. The great thing about Bono, though, is that he probably doesn't care whether he looks cool along the way.

Bono's humanitarianism has always been purchased on the credit line of U2's fame, which is precisely why it has made a noticeable return in the last year. Many U2 fans (and rumor has it even Bono and his band mates) had speculated that the band's best days were behind them. But now U2 have suddenly made their best album in a decade. "All That You Can't Leave Behind," released in fall of 2000, has received nearly unanimous critical acclaim and sold millions. The accompanying Elevation 2001 Tour has sold out arenas throughout the world, and U2 have racked up a slew of honors. Suddenly, it's as if they never stopped being the biggest band in the world.

"It's hard for rock 'n' roll artists to grow and mature and find ways to have long careers," says New York Times rock critic Ann Powers, an avowed fan of the band. "U2 figured out how to break out of that, and a lot of bands don't."

In the wake of "All That You Can't Leave Behind," Bono and U2 have been praised for coming back to the kind of guileless art-rock that originally gained the band acclaim before Ronald Reagan had even unpacked his bags in Washington. But like his band mates, Bono is not the same man he was 20 years ago. In U2's first several albums, Bono's lyrics exhibited uncommon faith in an era full of anger and gloom. But after the darker introspection of the band's albums from the last decade, "All That You Can't Leave Behind" is particularly notable because Bono has again come to see the glass as half-full.

Yet when he sings "It's a beautiful day, don't let it get away," it's not youthful pie-in-the-sky optimism, but a faith that's been redeemed over time. That's something altogether more meaningful. And while that was already true before Sept. 11, it's even more relevant now. This is no time for idealism, but rather one in which defiant, profound hope is desperately needed. And that's what "All That You Can't Leave Behind" is all about.

As Bono has become a prominent spokesman for Third World debt relief and the related African AIDS epidemic, there's no doubt it recalls countless pet causes of years past. In the mid-'80s, as "War" (1983) and "The Unforgettable Fire" (1984) first carried U2 toward multiplatinum success, they were fixtures in the Band Aid and Live Aid campaigns to end famine in Africa. When "The Joshua Tree" (1987) was about to make them the biggest rock band in the world, U2 joined Sting and Peter Gabriel belting out hits for Amnesty International. Around the same time Bono joined the chorus of artists singing "I ain't gonna play Sun City," in an effort to end South African apartheid. Because it's easy to be cynical about high-profile celebrity causes, it's to his credit that such a high-profile star managed to maintain credibility while so actively utilizing the spotlight, however nobly, for his own objectives.

Remember back in the late '80s when Arizona dragged its feet establishing a Martin Luther King holiday? Soon after, a lot of famous acts (Stevie Wonder, the Doobie Brothers) canceled their concerts there. Not U2. Playing a sold-out arena in Tempe, they instead prepared a statement of protest for the crowd, played a rollicking show and afterward invested thousands of their own dollars in the grass-roots campaign against Gov. Evan Mecham, the MLK holiday's chief opponent. "Who are they to tell Arizona what to do?" raged one of Mecham's aides. And really, he was right. U2 should probably have canceled the show, which Bono later confessed to biographer Carter Alan. But, however clumsily they came off, or how much they exposed themselves to justifiable criticism, U2 were willing to risk themselves, to use music as ammunition in a larger struggle regardless of the consequences. How many corporate rockers can you say that about?

Yet compared to Bono's meeting this summer with North Carolina Sen. Jesse Helms to discuss the African AIDS crisis, all that past activism seems like child's play. In recent times he has brought his crusade to the likes of President Bill Clinton, British Prime Minister Tony Blair and Pope John Paul II, the last of whom famously donned the singer's trademark shades in a surreal photo op. But Bono's summit with Helms was much more noteworthy, because it marked a leap over the ideological divide.

For millions the North Carolina senator symbolizes American conservatism at its ugliest. And yet here was Bono breaking bread with Helms at the Capitol as if the two were old chums. "You'll always be a friend here," Helms told Bono that day.

"U2 has always been about bringing ideas to a larger audience, and crossing boundaries," says Powers. "I think that Bono's wise enough at this stage of his life to see that sometimes the right connection can come from a surprising place."

Bono's meeting with Helms reflects a rite of passage most of us experience sooner or later. Maybe his more idealistic days seemed a more appropriately romantic rock star stance, but Bono has learned that all the posturing in the world won't make cohesive progress without cooperation across the political boundaries. Why wave protest signs outside when you can waltz through the corridors of power?

"He's very articulate," says Rolling Stone contributing editor Anthony DeCurtis, who has written about U2 frequently over the last 15 years. "In a great tradition of Irish rhetoric, Bono has a way of just leaping over contradictions, and through sheer eloquence and charm managing to bridge otherwise completely unbridgeable gaps."

Whether it's our friends or our idols, the people who capture our imagination are always changing. Bono has evolved over two decades from heart-on-his-sleeve idealist, to irony-ensconced rock 'n' roll Liberace, and finally to a sort of hopeful pragmatist. Regardless of the actual effectiveness of his crusades, his more practical political acumen is something Bono has been working toward -- in and out of music -- for most of his life.

What originally transported U2 from Dublin clubs to the world stage was a combination of punk rock aggression and a defiantly purposeful attitude. Mere months before U2's band mates first met, the Sex Pistols' Johnny Rotten famously sang that there was "no future for you." Growing up just across the water in Ireland at a time of near-revolutionary civil strife, nobody could have blamed Bono for feeling the same kind of bitter angst.

As the child of a Catholic father and Protestant mother, however, Bono saw beyond the polarized religious rhetoric, his lyrics demanding a more promising future. As U2 gained notoriety in songs like "Sunday Bloody Sunday," with Bono singing, "I can't believe the news today, I can't close my eyes and make it go away," the band pleaded for peace with 11th-hour urgency. We loved them for it, even if deep down we knew it wouldn't change the world.

Various strains of this idealistic persona remained all the way to the album and concert film "Rattle and Hum" (1988), but by that point in U2's career something had to change. Whether it was their derivative rendering of American roots music, or how their overexposed politicking simply grew tiresome, by 1991's "Achtung Baby," a complete reinvention was not only advisable, but downright essential.

In the changed musical landscape of the post-Nirvana early '90s, a lot of famous acts lost their way. But the masterly "Achtung Baby" suddenly made U2 more vital than ever. And after bristling for so long at the notion of rock 'n' roll stardom, their embrace of the crazy burlesque pageant that is rock was oddly refreshing. While U2's stage persona took a turn toward the bombastic with the Zoo TV Tour in 1992, Bono largely took leave from high-profile social activism as his lyrics entered a sort of blue period, exploring the doubt and desperation we've all felt at times.

"For all of the theatrics of 'Zoo TV' and 'Achtung Baby,' there still is a core of belief in U2 that has remained constant," notes DeCurtis. "There's a kind of skepticism, or questioning side of them, that's come to the surface, but also there's a kind of yearning that real ironists never admit to." Looking back with the hindsight of history, the darkness of "Achtung Baby" is precisely what gives the optimism in "All That You Can't Leave Behind" its legitimacy.

Great artists also have an intrinsic sense of timing, and U2 are no different. Just as "Achtung Baby" perfectly reflected the irony-obsessed early-'90s zeitgeist, "All That You Can't Leave Behind" embodies our renewed taste for the genuine, which has only increased following the events of Sept. 11. "It reminds me of that aphorism by William Blake: Enough or too much," says DeCurtis. "That's pretty much U2's guiding principle. Whether it's their total reinvention on 'Achtung Baby' after 'Rattle and Hum' or 'All That You Can't Leave Behind's' return to essentials, the connection is that they've always bounced back from something beyond its usefulness."

And so a man who just a few short years ago was parading the concert stages of Europe dressed as MacPhisto, an absurd combination of Faust's Mephistopheles and Liberace, can go on to share the stage with the most powerful men and women in the world. That Bono has so often looked absurd and bounced back gives every one of us who has embarrassed ourselves at a party, or pontificated far too long at a podium, or created art that disappointed, hope that the future is indeed unlimited. Bono reminds us that time makes everything possible.

Not only is that timing useful when it comes to making rock records, but it's equally important in politics. That's why we see Bono out there now with Jesse Helms and John Paul II. As the age of irony wanes, and the world unites against an uncannily elusive enemy, a rock star like Bono can speak matter-of-factly about social causes again and actually be taken seriously. Whether it's in the studio or on the steps of the U.S. Capitol, Bono knows he's got to ride the wave while it lasts.