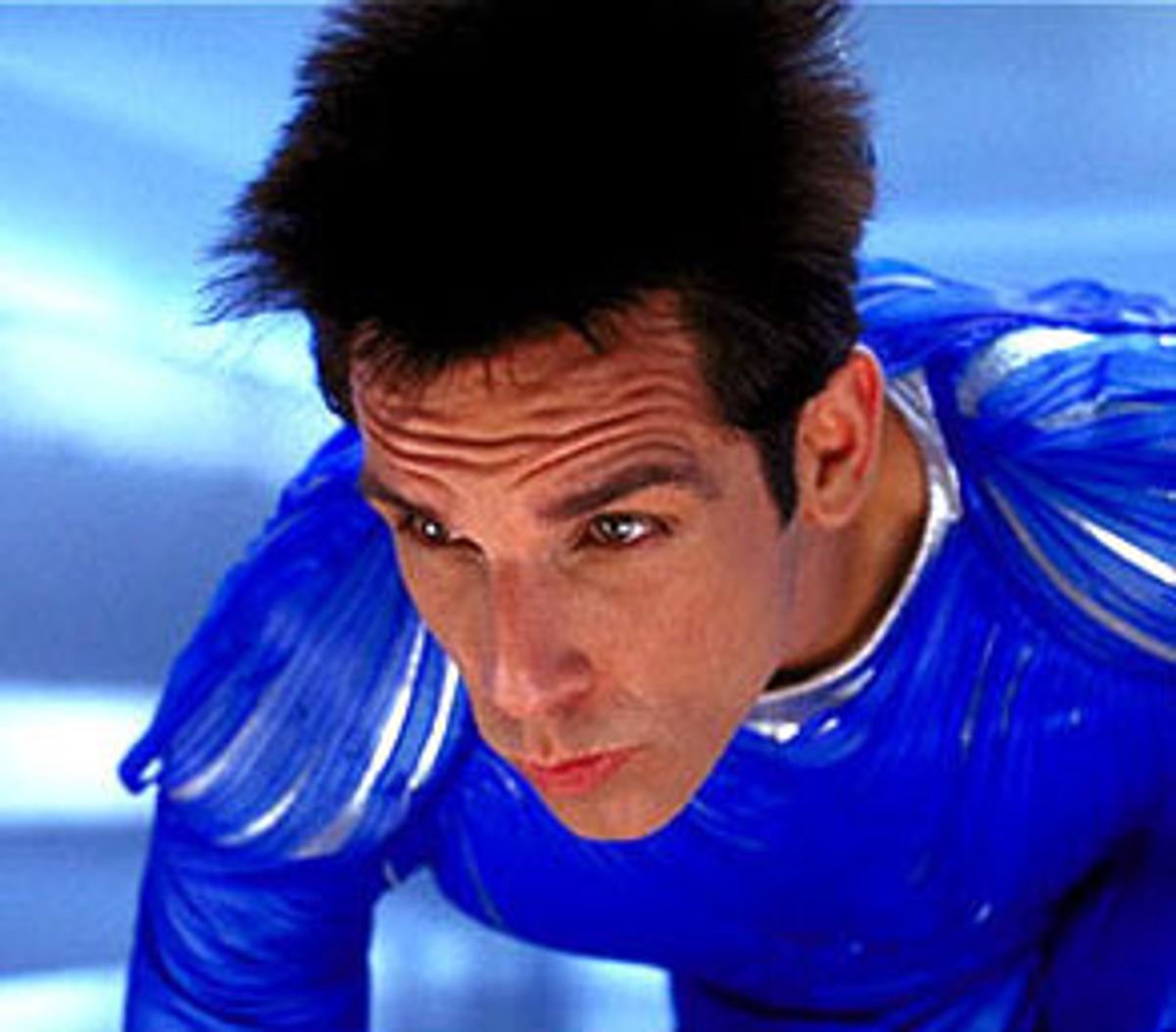 "Zoolander" is like "The Manchurian Candidate" for Prada addicts. On the whole, Ben Stiller's action comedy about a dim bulb of a supermodel brainwashed into being a killing machine could use a lot more style -- it's mostly a string of gags that work well enough as you're watching them but quickly go the way of last year's Fendi bag. Like fine tailoring, making comedies has become something of a lost art: Few directors bother, or know how, to give them any shape or structure anymore.

But "Zoolander" serves as glossy, throwaway fun, and it features more cameos than you can shake a mascara wand at: Lil' Kim, Fabio, Winona Ryder, Cuba Gooding Jr., Heidi Klum. It's like a big party to which Stiller has invited all his friends, but then again the fashion world is all about parties with the right guest lists. The movie both grooves on and sends up the very glitterati who shimmy and strut through it. It's Zoolander's world; we just live in it.

Derek Zoolander (Ben Stiller, reprising the character he played in two previous short films) is a fabulously successful male model whose voice has the breathless ditziness of a Marilyn Monroe caricature; his phrases are so precise it's as if they've been plucked into shape with tweezers, but they don't make much sense. (When a character reveals that she used to be bulimic, he gazes at her, his mouth an incredulous "o," and says, "You can read minds?") He realizes he's losing ground in his profession: A young rival named Hansel (Owen Wilson, his lips frozen permanently in a surfer-dude moue) is ready to supplant him as the GQ cover boy du jour. Zoolander feels dejected and vulnerable, making him highly susceptible to the evil plot being hatched by megadesigner Jacobim Mugatu (Will Ferrell in kooky facial hair). Mugatu hopes to turn Zoolander into a killer, specifically to murder the prime minister of Malaysia, who has had the audacity to crack down on child labor infractions, thus endangering the profit margins of every fashion designer in the free world.

Zoolander, a perpetual innocent despite his sophisticated threads, almost falls moussed-head-first into the scheme, but Matilda (Christine Taylor), a journalist who has just written an unflattering profile of him in Time (Zoolander confronts her with words along the lines of "It's a good thing none of my friends read your stupid little magazine!"), catches wind of the plan and intervenes. With her plain-Jane clothes and librarian demeanor, she's barely prepared herself to face down evildoers like the Russian glamazon Katinka (Milla Jovovich), who derisively refers to her as "KMart."

Some of the silliness in "Zoolander" is inspired. Jerry Stiller, who just gets funnier as he gets older, plays Maury Ballstein, the head of the agency Zoolander works for, Balls Models. He appears in a succession of ever-more-luxe velour track suits, always with a thicket of obviously fake white chest hair spilling from the front. And some of the movie's silliness is as light and as fleeting as dandelion fluff: For instance, the way Zoolander, after speaking at the funeral of three of his closest male-model friends (they were killed when a playful gasoline fight turned tragic), identifies himself to Matilda as a eugoogleizer.

"Zoolander" doesn't work as a sendup of the fashion world, but that couldn't have been Stiller's goal, anyway: The target is just too easy. And if you've ever seen Polly Mellen (the Thurston Howell of the fashion world) making her lockjaw pronouncements in the wonderful "Unzipped," with Isaac Mizrahi, you realize that fashionistas are their own most successful parodists.

"Zoolander" is just an excuse for Stiller to prance about in absurdly over-the-top clothes, showing off his various model looks: He's given them names like "Blue Steel" and "Le Tigre," even though they're all a variation on the same cartoon-sultry pout. It's to Stiller's credit that he can sustain the joke for the length of the movie, but just barely. Ten more minutes of "Zoolander" would have been 10 minutes too many. He's just safely behind the line of being a fashion don't.