The war on special interests

Anti-terrorist fervor has upset the political apple cart: Long-entrenched lobbyists are suddenly being defeated and ignored. But will they soon resurface? 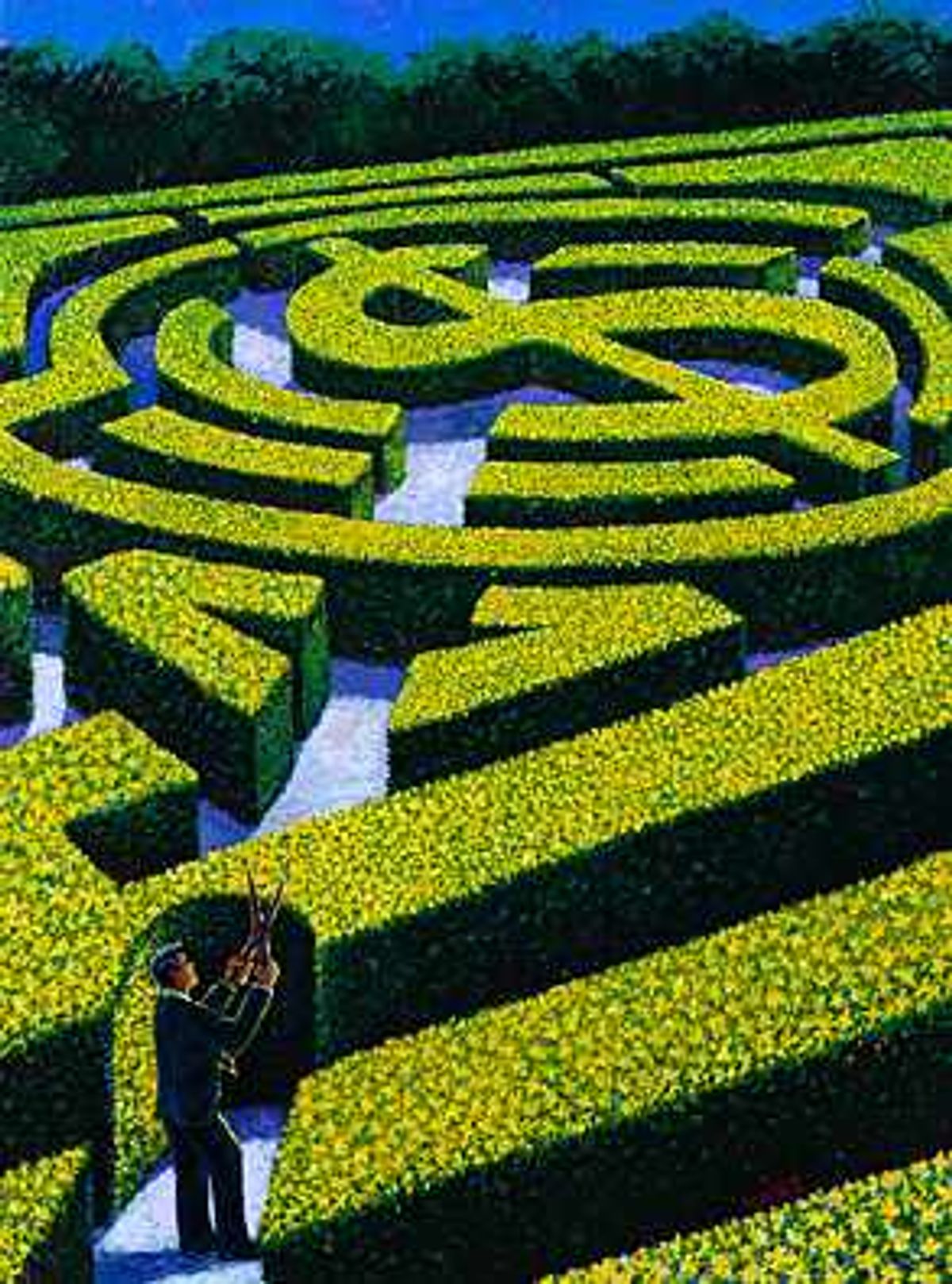 Republican leaders and the financial industry united this summer to fight a foreign foe. Together, fused with the glue of more than $300 million in campaign contributions since 1999, they faced an enemy that at the time seemed extremely dangerous.

The adversary in question? Stricter banking regulations. More than 30 of the world's largest economies wanted the United States to support new rules that would give governments more power to investigate dubious finances and collect tax revenue on the $1 trillion or so believed to be secreted away in offshore accounts.

Passage of the banking reforms, a few Democrats pointed out, would help U.S. taxpayers, who pay an estimated $600 million in taxes for activities to combat money laundering. And in retrospect, the stricter reporting regulations might have tipped off investigators to clues illuminating last month's terrorist attacks. But at the time, Congress and the White House were more concerned with protecting the sovereignty of small nations, the privacy of offshore account holders, and the finances of major U.S. banks -- many of which earned large sums by servicing offshore institutions.

"I do not think it is appropriate for the U.S., or for the OECD" -- the Organization for Economic Cooperation and Development, an international coalition that proposed the new laws -- "to tell a sovereign nation what the structure of its tax code should be, period," said Treasury Secretary Paul O'Neill at a June congressional hearing. "We may not like what other countries do, but I don't think it's our right to tell other countries what to do."

Now, however, the Bush administration and Congress have changed their tune. Reacting quickly to the Sept. 11 attacks, the House of Representatives agreed Tuesday to pass an anti-terrorism bill that includes onerous burdens for the financial industry. Banks and other institutions subject to the bill -- which seems destined to pass -- would have to do a better job of getting to know their customers, asking more questions, maintaining databases with more information, and flagging far more supposedly suspicious transactions.

Compared to what had been favored internationally before the attacks, the new bill looks far more intrusive, says Bert Ely, a banking consultant and longtime opponent of stricter banking regulations. But in the current climate, neither the industry's lobbyists nor an increase in large donations is likely to keep regulation at bay. "On this one, the banking industry is just going to have to take a hit," he says.

Welcome to the new political world, in which well-heeled donors suddenly must take a back seat to national security. It's a cliché by now to say that "everything's changed" since Sept. 11, but political observers stress that the terrorist attacks did indeed transform the relationship between government and special interests. By creating a "united and aroused public," as one history professor put it, the terrorist attacks suspended the usual rules. Legislators are turning away from their beloved donors, favoring legislation once opposed not just by banks but also by airlines and the computer industry. The incessant clamor of corporate demands for deregulation -- successful for the past decade and greased with millions of dollars in donations -- is suddenly falling on deaf, patriotic ears.

But while this collective public passion has restored faith in government, and is signaling that politicians aren't always beholden to their biggest donors, another question looms: How long will it last? President Bush met Wednesday with Wall Street executives, just as fundraising for the 2002 election is set to start up again after a brief post-attack hiatus. Policies enacted immediately after the assaults -- no curbside check-in for example -- are already disappearing. As powerful lobbies continue to fight harder than ever for pet projects, and with a public that's beginning to move on, politicians will soon once again be able to maneuver outside the intense media spotlight. And once that happens, experts argue, the business of politics may soon return to normal.

"Everything I know about politics, and all of our history, strongly suggests that the rules haven't changed," says Larry Sabato, director of the Center for Governmental Studies at the University of Virginia. "As time goes on -- maybe six months to a year in this case -- the normal rules of politics, including the regular influence of powerful industries, will begin to apply fully once again."

Worldwide events have always had an unpredictable effect on political ecosystems. Not infrequently, crises help to bridge the gaps between entrenched political positions. World War II, the rise of organized crime, the Kennedy assassination -- historians argue that in each case such events created a spirit of legislative unity that often shunted corporate interests to the sidelines.

The present situation offers a new iteration of the principle. Already, the list of political reversals borders on the astounding. Along with the banking backpedal, observers have watched Federal Reserve chairman Alan Greenspan come out in favor of a large fiscal stimulus that cuts against his own party's plans for a narrowly tailored capital gains tax cut. They've seen Phil Gramm, R-Texas, the staunchest opponent of strict banking laws, silenced. And they've seen Democrats drop their opposition to national missile defense, an issue that before Sept. 11 seemed destined for a long political battle.

Meanwhile, Congress and the White House have moved legislation that's angered everyone: from the gun lobby to civil libertarians to labor unions and major corporations in the banking, airline and computer industries.

"The terrorist attacks changed everything," adds Larry Noble, executive director of the Center for Responsive Politics, a Washington campaign-finance nonprofit. "It made things acceptable -- like the banking regulations -- that weren't acceptable before."

The corporate lobbyists aren't completely on the retreat. The much-ballyhooed airline bailout, for example, could be interpreted positively for the industry. The House and Senate passed a $15 billion aid package just 10 days after the attacks. But the hastily written legislation didn't force the airlines to share the money with labor unions or travel agents and some observers are calling it a sweetheart deal since the industry is expected to lose only about $5 billion by the end of the year.

Similarly, the high-tech lobby avoided serious trouble when talk of limiting sales of encryption software -- an issue fought over and won by the high-tech industry during the '90s -- surfaced briefly and then subsided.

But at the same time, neither of these industries nor the financial industry could be declared politically victorious. Banks will have expensive extra burdens. Internet service providers that had successfully kept law enforcement from intruding on their customers' privacy with the Carnivore spying program would be forced under the new anti-terrorism bill to divulge specific e-mail identification information. No recourse has been provided; if the FBI decides that an ISP customer is suspicious, then the ISP must give up the information.

Nor is the airline assistance package ideal. The airlines asked for $24 billion originally. But only $5 billion of the approved $15 billion windfall comes in the form of a grant; the rest of the aid will be loans that the industry will have to pay back. At the same time, the industry will soon be forced to implement costly security procedures. Some of the immediate expense will be picked up by the federal government -- Bush gave the industry $3 billion to improve security -- but the ongoing cost of more training and screening of employees, to name just one item, will extend beyond this year.

Airlines will try to pass the costs on to consumers, and "they're going to work very hard to make sure that the hard expensive work falls on the government," Noble says. But for now, observers expect that at least part of the cost will likely be shouldered by the airlines.

Despite the aid package, the industry has still suffered a political defeat, says Sam Skinner, transportation secretary under the previous President Bush. Most of the ideas now being set into law have been knocked around in Washington for a decade. They never passed because "the industry lobbied Congress and convinced them not to do it," he says. "They were against most of the initiatives because they cost money."

After Sept. 11, that opposition withered away. "The overriding concern was terrorism and it would be extremely hard for any special interest to win that fight," says Celia Wexler, senior policy analyst at Common Cause.

Still, she and others argue, this too will change. Just as some events bring Americans together, others throw them apart. Financial crises in particular are problematic. The deepening recession of 1981-83, for example, ended the Republican reign and set off a series of political squabbles. "[It] returned the system to stasis," Sabato says.

So, some experts argue, if recession becomes the dominant political issue -- overcoming a secretive war that recedes into the background -- lobbyists will likely thrive. The economy, which directly relates to corporate interests, will become their stepping stone.

"Bush and Congress can ill afford to defer to business while they are waging a war on terrorism," says John Green, politics professor at the University of Akron and editor of "Financing the 1996 Election." "But once we are back to business as usual, business will have the usual influence."

Corporate lobbyists who have been defeated on larger security-related issues will probably try to win back some lost ground. They'll benefit from the inevitable decline in interest on the part of the public and media.

"Once their [the lobbyists'] concerns fade from the spotlight, their leverage increases," Noble says.

Corporations have a hard time winning support in high-profile situations "where they are pitted against other powerful interests and held up in the light of the media," Green adds. They are most powerful in less publicized matters, in the details, when no one knows or cares."

But between the short-term loss of corporate influence and the suspected long-term "return to normal," there lies a test -- the fiscal stimulus package. Treasury Secretary O'Neill announced Wednesday that the administration would seek $60 billion to $75 billion in aid for the economy. Senate Majority Leader Tom Daschle, D-S.D., has signaled that Democrats would go along with the package's size, despite fears of driving up the deficit. But what about the details? Who will win, who will lose? Will legislators cater to the retail industry, which is calling for tax rebates sent in time for the holidays? Will the sagging stock market induce Congress to favor corporate tax breaks for Wall Street and other corporations? Will the unemployed get any help?

All of these questions will be answered in coming weeks. Given their show of unity since Sept. 11, legislators may end up passing legislation that amounts to good, swift medicine -- a package without pork for favored industries or interests. But few observers seem optimistic. In the words of Sen. John McCain, R-Ariz., a longtime proponent of campaign finance reform, "the fun has just begun. There's no train that leaves this station that [special interests] don't want to climb on."