In a new mordant noir from John Dahl, a terror-filled open highway is the star of the show. 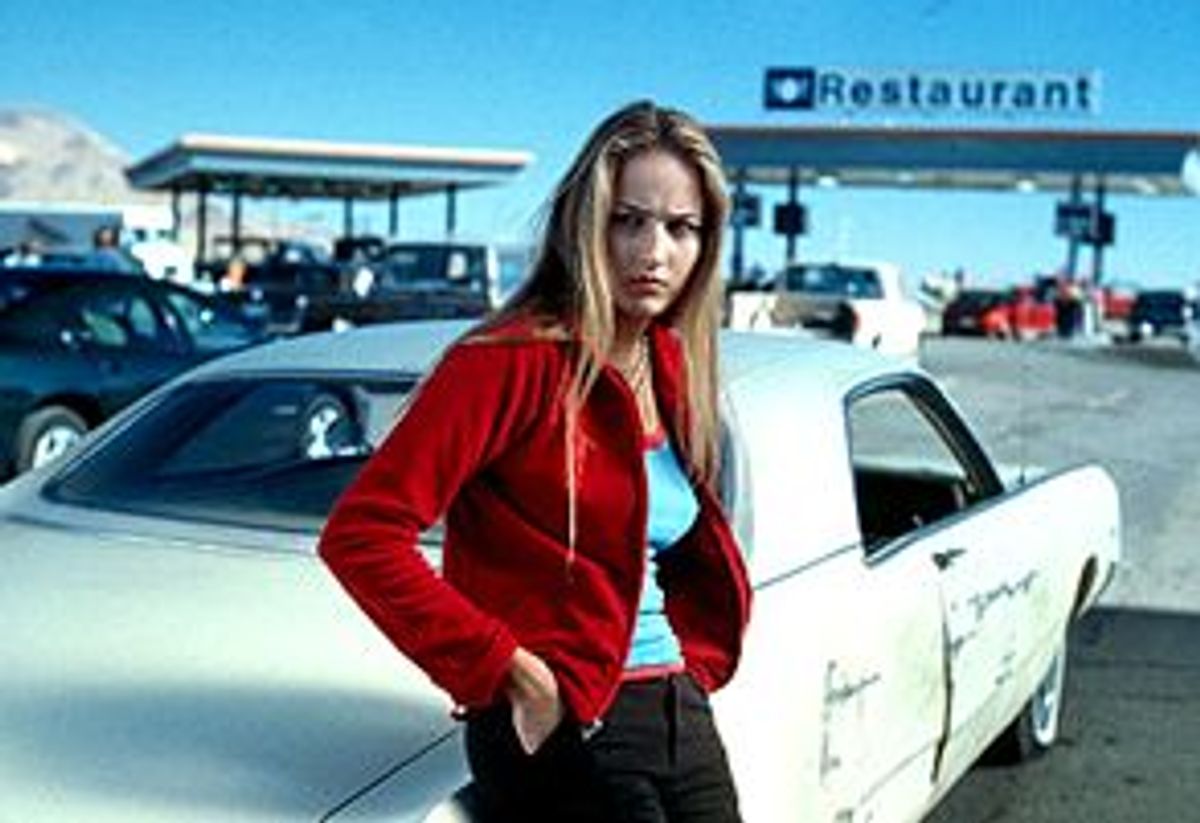 Cities are supposedly laced with danger, but director John Dahl knows that those great ribbons of open road out West, stretching past magnificently ominous red mountains and schemingly welcoming motels, are where the really scary stuff happens. Dahl takes the simplest elements -- the muted, bloody red lights of a signal coming in on a CB radio; the gleaming, grimacing front grill of an 18 wheeler -- and turns them into ingredients for fresh nightmares. "Joy Ride" is cheesy fright cinema layered with an unnerving veneer of cool, the sort of thing that, in its tensest moments, might make you yell out loud at the movie screen, only to then slump in your seat in embarrassment. Dahl works the audience like the dial of a car radio, testing out all manner of squeals and static and all-out, high-pitched terror.

The kicker is that "Joy Ride" is funny, too. In fact, it would be a superbly frightening entertainment if not for the way Dahl fixates, disturbingly, on sadistic details: A man's leg impaled on a rusted metal spike; the sight of a terrified woman, bound and whimpering, as her attacker silently arranges the means of her demise. We're treated to repeated shots of both (as well as one of a man lying in a hospital bed with his jaw torn off). Those are the moments when Dahl's movie doesn't ring true, as if he didn't trust his otherwise sterling instincts, particularly his understanding of the notion that the things you don't see are always scarier than the ones you do.

I mention those grim missteps up front only because I suspect that American movie audiences, at least in some parts of the country, may still be a bit raw right now, and "Joy Ride" is too unsettling in places to be recommended as a pleasantly escapist diversion. But craftsmanship is its own kind of comfort, and there's no getting around the fact that "Joy Ride" is skillfully made. (It has much more in common with Dahl's first feature, "Red Rock West," than it does with the later travesty, "Rounders.") The picture's sly sense of humor -- it was written by Clay Tarver and J.J. Abramas -- only heightens the tension; even as you're laughing, you're half dreading, half anticipating what's coming next.

"Joy Ride" is an obvious nod to Steven Spielberg's "Duel"; its villain is a murderous trucker we never see -- his stand-in is that truck grill, with a gleaming death's head grin. Lewis (Paul Walker, of "The Fast and the Furious") is a college freshman who hopes to kindle a romance with the girl of his dreams, Venna (Leelee Sobieski), who's currently just a platonic friend. Venna goes to school in another city; the plan is that Lewis will pick her up and the two will head out on a cross-country trip. But just as Lewis sets out, he learns that his older brother, Fuller (Steve Zahn), has been thrown in jail. He makes a detour to pick him up, which is when his troubles begin.

Fuller is one of those guys whose instincts never lead him to do the right thing -- the way the extraordinarily talented Zahn plays him, his face is one big "Uh-oh." Just for fun, Fuller has a $40 CB radio installed in Lewis' car; as the two whir along a deserted nighttime highway, Fuller persuades Lewis to hop on the radio and do his best girly-girl imitation, adopting the handle Candy Cane -- a practical joke to get the truckers out there all hot and bothered. It's not long before a craggy, burnt-bourbon voice responds. The guy's name is Rusty Nail, and Fuller, thinking the prank hilarious, goads Lewis into luring Rusty Nail further and further out.

"Joy Ride" unwinds gradually, tautly -- Dahl lets the line out smoothly and then jerks it back just a bit, the best way of getting us to bite. When Fuller gleefully grabs that CB receiver and starts babbling retro-'70s CB nonsense into it ("This is like a prehistoric Internet!" he announces with gleeful innocence), you just know something bad is going to happen. And sure enough, before long Rusty Nail is enraged. A disembodied presence, he shows up at the darnedest times, in the darnedest places: Sometimes he's just a crackling voice on the radio, a deadly vapor in the night; other times, he's the specter behind the darkened windshield of his truck, which emerges from swirls of headlight-bleached mist that looks as if it were pumped in fresh from Hell.

The boys' '60s coolmobile is the hapless mouse; Rusty's truck is the feral cat, stalking them through a landscape of sandy reddish mountains and blurry-neon motels. Dahl, with the help of cinematographer Jeffrey Jur, gives us some masterfully creepy visuals -- they're roadside gothic at its best. As a rainstorm rumbles outside, Lewis and Fuller press their ears to the wall of their motel room, the better to hear the horror that's going on next door. Between them is a cheap print of a generic 19th century seascape that seems to come to life itself -- Frankenpainting! -- lit up by the lightning flashes that fill the room.

The actors have no trouble latching onto Dahl's goofy-terror aesthetic. Sobieski, with her silky curtain of hair and '60s sadsack-doll eyes, plays one of those self-possessed college girls who can hold her own (up to a point) even in a redneck bar. Walker is the blandest presence of the three. But his blond blankness makes a great foil for Zahn, whose scampering line delivery and twitchy physical mannerisms make him seem like a monkey who's perpetually climbing an invisible tree. Damn it, though, if he doesn't cement our affection for him in his first scene: When Lewis shows up to get him out of jail, Zahn's Fuller, surprised to see him, says only, "Hey." For a moment, his eyes are softened with a sense of wonder. We bond with him immediately, a necessity considering that he's the one who's going to be making most of the trouble for the rest of the movie.

But Dahl's highway is the real star of the show, a place where both Americana and abject terror thrive and the trick is to be able to know which is which. This is a place where sheriffs have lines like "I'm thinkin' that takin' a little look-see might refreshify your memory." Dahl even gives us a twist on the old Burma Shave sign gimmick: As the boys try to outrun Rusty Nail's truck, Fuller notices that one word has been spray-painted on each of a succession of roadway signs, ultimately spelling out an ominous message.

Those signs are like a postcard from a roadway Hades, an inversion of the old-time classic phrase "Wish you were here." But Dahl's highway, if it really existed, is the last place you'd want to be. In space, no one can hear you scream. They don't hear so good out on the highway, neither.