Hundreds of thousands of Afghans already live in squalid Pakistani refugee camps, where freshly made coffins lie outside carpenters' workshops. Can the world handle a million more? 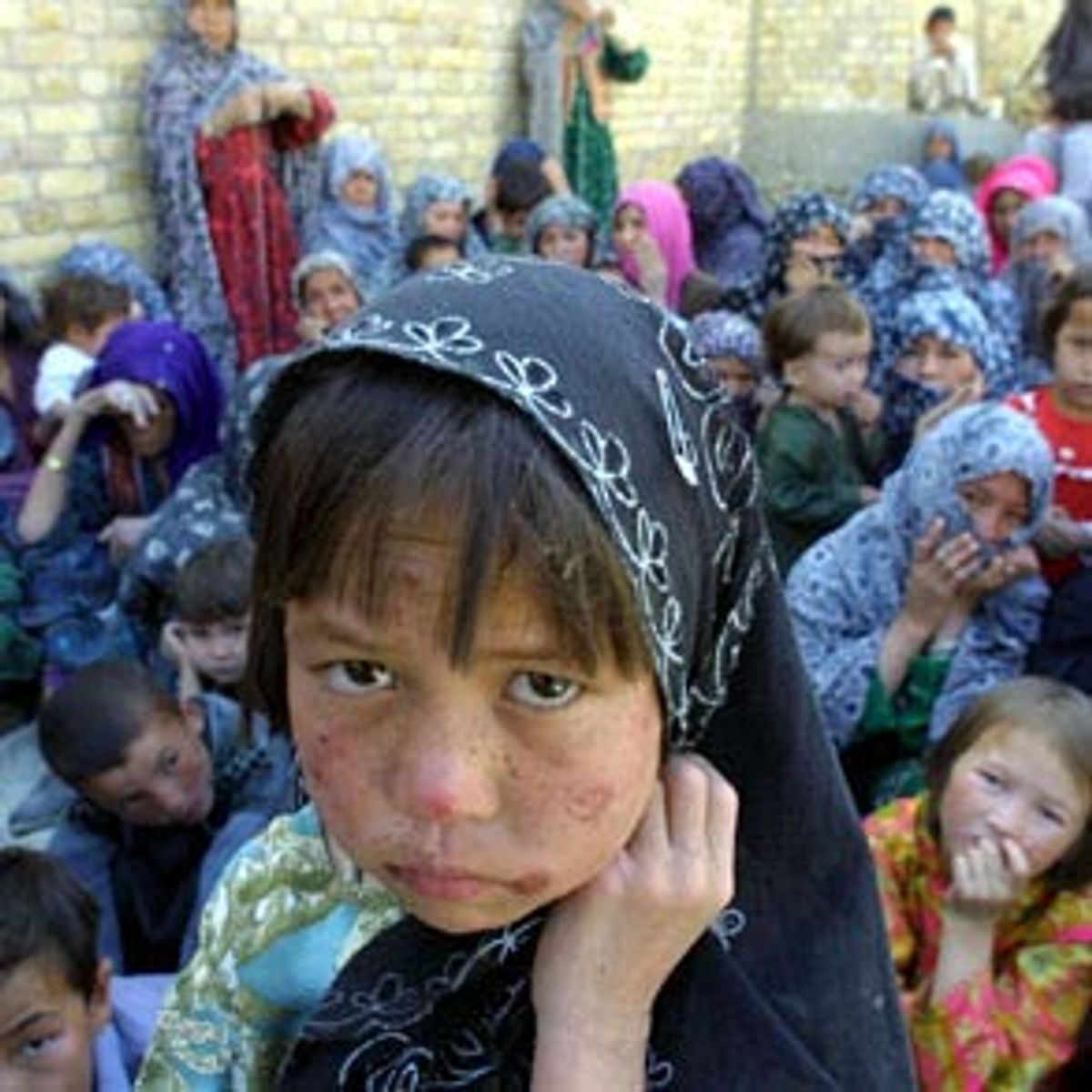 When the U.S. attacks Afghanistan, as expected, Pakistan could face one of the largest refugee crises of modern times. As many as 1 million Afghans could flee from the conflict, as well as from already rampant starvation caused by the drought that has afflicted Afghanistan for almost four years.

Thousands of Afghans with money and connections have already handed over their savings to smugglers and crossed into Pakistan illegally. The U.N. High Commissioner for Refugees (UNHCR) reports that since Sept. 11, 15,000 Afghan refugees have arrived in Pakistan. In the last year alone, UNHCR says, an estimated 180,000 new refugees entered Pakistan due to drought, starvation or the ongoing civil strife.

Most have joined relatives and friends in the Afghan refugee community of more than 2 million in this country. Many live in sprawling refugee camps, such as Peshawar's Katcha Gari camp, a semi-permanent shantytown of mud houses, shops and mosques where fetid open sewers bisect the tiny alleyways and there are always freshly made coffins outside the carpenters' workshops.

So far, fewer refugees have crossed the border than expected since Sept. 11. The UNHCR says that the 20,000 Afghans who had massed on the border in recent weeks have mostly disappeared, as fear of immediate U.S. attacks has faded. On Wednesday, President Bush announced a landmark $320 million humanitarian aid package that will try to keep Afghans from fleeing the country by providing aid within its borders, as well as provide food and shelter to the refugees. If the plan works, some experts say, the coming refugee crisis could be smaller than projected.

"Quite honestly, I'm surprised that there aren't more refugees fleeing," says Lionel Rosenblatt, president of Refugees International, who attended Bush's speech outlining his humanitarian aid plan Wednesday. "If they use this funding wisely, there may be a hope to go beyond preventing a mass exodus and actually do some development work, the way we should have done when the Soviets left."

Still, aid groups are gearing up for a new influx of refugees nonetheless. And the latest wave of Afghans will find themselves made even less welcome in Pakistan than previous arrivals. So far, security and ease of repatriation to Afghanistan, once the current crisis is over, have been the overriding concerns of the Pakistan government in making plans and choosing sites for new refugee camps.

The Pakistan government gave UNHCR a list of 100 possible sites to reconnoiter this week. Each camp will house between 10,000 and 20,000 refugees. All are situated within five miles of the Afghan border, an area of desert and mountains that would be a hostile and challenging environment in itself. But they are also located in Pakistan's tense and unruly tribal areas, far from major cities.

The rationale behind the positioning of the camps is simple. Azhmat Hanif Arakzai, home secretary of Baluchistan province, said: "We do not want to make the same mistake as the 1980s, when the refugees were able to integrate within the community. We want to keep them together and provide aid for them together."

Arakzai said he wanted to surround the camps by barbed wire. But Roy Herrmann, head of UNHCR in Peshawar, insists that will never happen.

"There won't be any barbed wire," Herrmann said. "They're not going to be internment camps. We're there to look after the refugees, not oppress them. But Pakistan wants the refugees to go back when the conflict is over so it will keep them in a very managed and controlled situation near to the border."

He said there was little risk of the camps getting hit in any military action: "Scuds have come across the border before, but only rarely. We're expecting to see more tactical, precision attacks in this conflict. But there will be security problems, especially for expat aid workers once hostilities have broken out. People in the tribal areas tend to be supportive of the Taliban."

Indeed, the tribal areas are religiously conservative and home to many heavily armed, pro-Taliban groups who could even revolt against their own government if it sides too closely with the U.S. That could mean trouble for refugees as well, since many will likely come from ethnic groups or even political factions that do not support the Taliban. One aid worker from a major international agency, who refused to be named, said he was worried that aid groups would not have proper access to the camps because they were situated in the tribal areas.

"It's not my favorite location," says Doctors Without Borders spokesman Diderik van Halsema. "The further the camps are from the border the better. We think refugees should be housed at least 50 kilometers from their country of origin."

The Pakistani government had originally wanted the camps to be situated on the Afghan side of the border, but relented after UNHCR alerted it to the problems this would cause. The UNHCR is hoping that the first camp, near the border crossing at Torkham, will be ready on Saturday, with more to be finished in the next week.

"Water is the big problem," said Herrmann. The drought that has afflicted Afghanistan has also hit the border provinces of Pakistan, and the camps will face serious water shortages. The water table is very low and deep tube wells could take up to two months to dig. Shallow wells are a possibility, but many of the camps will rely on water being tanked in. A camp of 10,000 people will require an absolute minimum supply of 16 tankers per day, which will pose an obvious logistical challenge.

Afghans have been coming to Pakistan since the 1979 Soviet invasion. At first they were welcomed with open arms as fellow Muslims fighting to free their land from the infidel communists and soon integrated themselves into the economic and social life of Pakistan, particularly in Karachi, Quetta and Peshawar.

Peshawar's public transport system is owned and run by Afghans, and across the city a huge number of Afghan restaurants serve the traditional Kabuli rice with raisins, carrots and chunks of meat, a dish that is a world away from Pakistan's oily Mughal cuisine.

But despite their initial warm welcome, Afghans have not had an easy time in Pakistan. Harassment from the police and army is common. Before the present crisis, the Pakistan government was repatriating Afghans and threatening to demolish some of the permanent camps. As Pakistan's economic situation has deteriorated, Afghans have been made scapegoats, which makes the recent pro-Taliban demonstrations particularly galling to many Afghans.

Atiyullah, a Tajik from northern Afghanistan now resident in Peshawar, said: "Most of the time the Pakistanis say 'We don't like Afghans. They come here, take our jobs and ruin our economy.' Then a few days later they are saying Afghans are our brothers and we will die for them."

There are also concerns that some refugees could be Taliban sympathizers ready to become a fifth column inside Pakistan, attacking Western and Pakistani targets in revenge for U.S. strikes on Afghanistan.

Disease is yet another reason for the Pakistani authorities to confine and isolate refugees. The region around the city of Jalalabad, only 40 miles from Pakistan, is on the verge of a malaria epidemic, according to the United Nations Office for the Coordination of Humanitarian Assistance to Afghanistan (UNOCHA).

The malaria is the falciparum strain, the most deadly type found in Afghanistan, which can kill a child in five days. The spread of the disease is being exacerbated by the exodus of urban people into the countryside. Rural clinics are seeing double their usual number of patients as frightened Afghans leave the cities.

A UNOCHA spokesperson said that insecticides and 10,000 mosquito nets are being distributed in northeastern Afghanistan but relief work is being hampered by the Taliban's refusal to allow local U.N. workers to use radio communications.

And as if to pile another torment upon long-suffering refugees, a hospital in the border town of Quetta Thursday confirmed that they are treating patients suffering from a disease similar to the Ebola virus. Crimean-Congo haemorrhagic fever (CCHF) attacks veins and arteries, leading to the collapse of major organs, with the sufferer bleeding to death from every orifice. One doctor said sufferers "literally melt in front of your eyes".

Doctors at the Fatima Jinnah Chest and General Hospital have set up an isolation ward to treat the sick. The disease, which first appeared in June, has killed eight people so far. All were either Afghan refugees or lived close to the Afghan border. The hospital's Dr. Taj Mohammad said, "There's a real risk of a CCHF epidemic among Afghan refugees."

The most optimistic view is that the aid package the U.S. announced Wednesday will stop the flow of refugees from Afghanistan and provide aid to those who have already left. But for now, a grimmer view prevails near the border: After fleeing to a country where they are not wanted, refugees will be kept in camps where water will be at a premium and disease a very real possibility. They will spend the winter in an inhospitable, remote and dangerous region in which foreign aid workers may be unable to work. Media access will be either denied or very tightly controlled. Their plight, like the plight of so many Afghans since 1979, may be hidden from view.