Airy and enchanting, this romantic comedy works overtime to sprinkle moonlight and stardust over itself. 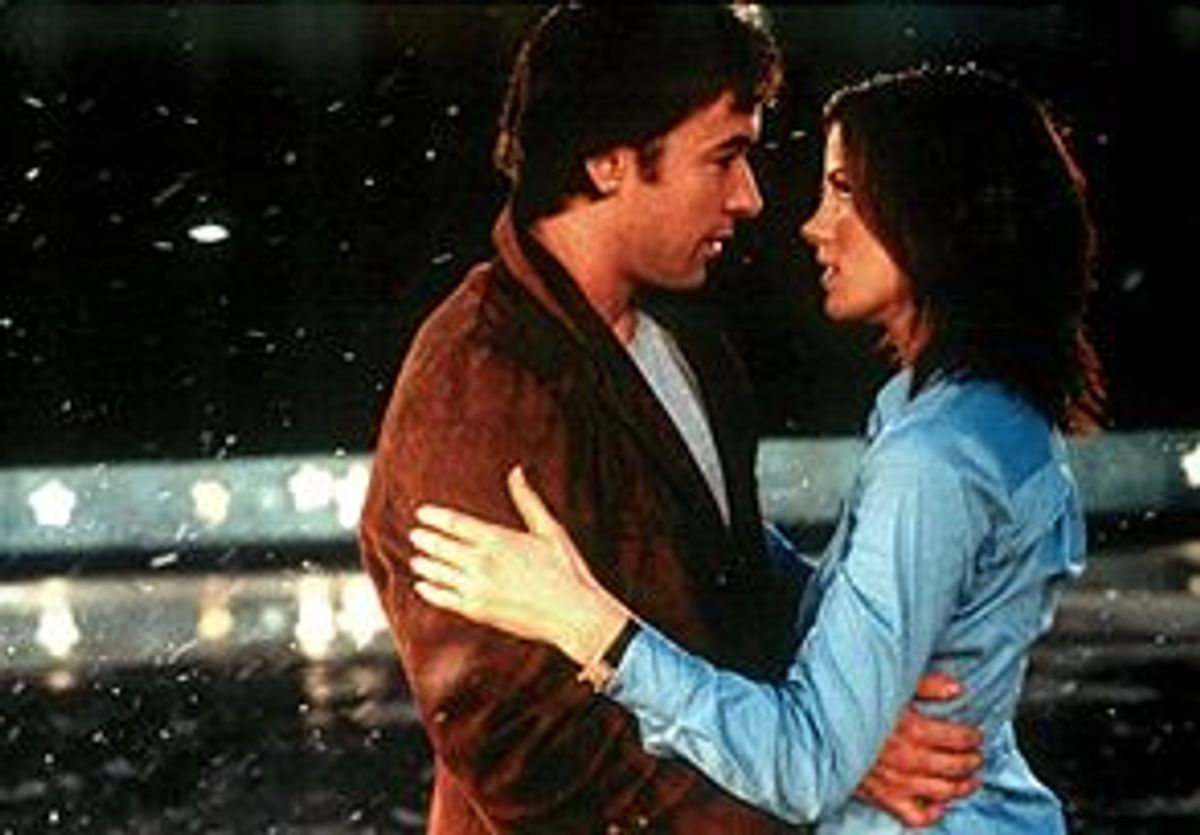 Ever since Sept. 11, critics and pundits have been predicting that moviegoers will be craving something light and entertaining, something to fulfill the movies' function of providing an escape. So it's nice to be able to recommend a picture that fits the bill and is good besides.

The romantic fantasy "Serendipity" works overtime to sprinkle moonlight and stardust over itself. You can feel just how hard the director Peter Chesholm ("The Mighty," "Hear My Song") and the screenwriter Marc Klein have worked to make the movie airy and enchanting. If you've ever been lucky enough to chance upon a really spectacular view of the New York skyline at dusk, when the lights of the city have come on and everything looks shiny and promising, you know the romantic wistfulness the movie is striving to conjure up.

It's a matter of luck in the movies, too. "Serendipity" may be calculated, but the good news is that all that hard work never prevents it from being genuinely charming. Luckily, it does prevent it from going goopy. And in the leads, John Cusack and Kate Beckinsale lend the picture a movie-star allure that's fully in the service of the mood. They're both so polished that, were they older, it would be possible to speak of their performances as the work of old pros.

The movie kicks off at Christmastime in Bloomingdale's, as spiffy and harried a setting for the beginning of a romantic comedy as any. Jonathan (Cusack) and Sara (Beckinsale) both have their eyes on the store's last pair of black cashmere gloves. Jonathan gallantly allows Sara to purchase them; because they've had a "moment," the two wind up spending the evening together, going for ice cream, ice skating in Central Park and talking, talking, talking. They're each involved with someone else, but obviously they're smitten with each other. Sara finally succumbs to Jonathan's argument that she should give him her phone number, but a gust of wind whips it out of his hand, and because she believes life is ruled by fate, she takes it as a sign that they aren't meant to be together.

But she offers him -- and the fates -- a compromise: writing her name and number in a copy of Gabriel García Márquez's "Love in the Time of Cholera" (another felicitous choice in establishing a romantic mood -- apart from being a great book, it's a steamy read). She tells him she plans to sell it at a used-book store the next morning and that if they're meant to be together, he'll find it.

With that premise, "Serendipity" sets itself a huge obstacle to overcome. How do you make a romantic comedy where the lovers are apart for most of the movie? In some way that trend (also used in the antiichrist of romantic comedies, "Sleepless in Seattle") is a sign of the cozy emotional safety that romantic comedies are now selling. Instead of throwing the lovers together where they will squabble and coo and meet the challenges circumstance puts in their way -- the template that has always provided the meat and the emotional grounding of the genre -- keeping them apart allows them to regard each other in a state of dreamy romanticized perfection. And the fade-out comes with the hard work of staying together yet to be faced.

"Serendipity" maneuvers deftly around that problem. Cusack and Beckinsale click so well in the long opening sequence that -- in some way -- finding their way back to each other becomes the big obstacle in their relationship. Klein and Chesholm provide all sorts of twinkly little coincidences and near meetings that are designed to show us that the would-be lovers are, though separated, right in synch with each other. But the real work is done by Cusack and Beckinsale, as they play two people attempting to convince themselves that, in not winding up with each other, they haven't settled for less. After their initial encounter, the movie leaps ahead a couple of years to find each of them engaged to someone else, Jonathan to a sweet, pretty, unexciting girl (Bridget Moynahan) and Sara to a shambling, self-absorbed galoot of a musician (John Corbett, Aidan from "Sex and the City"), who plays a godawful strain of Middle Eastern cum New Age slop.

The movie follows Jonathan and Sara through their singular case of pre-wedding jitters; thankfully Chesholm and his actors know how to keep things light, because the forced looks of happiness on Cusack's and Beckinsale's faces, a mixture of hope, self-deception and the determination to be grown-up, would be almost painful to watch otherwise. (It's a dodge that the movie glides over Jonathan and Sara's distraction from their respective fiancés, but it's a necessary dodge; if the movie lingered on the pain they cause them, it would throw itself out of whack.)

If John Cusack has seemed born to play romantic comedy ever since "Say Anything ..." it may be because he yields to his leading ladies as fully as any actor working. He's an unusual actor, one who finds his self-definition in deference. We've all seen actresses playing women who are meant to blossom when they fall in love (or fall into bed). When John Cusack's characters give themselves over to love, they bloom, they seem finally able to be themselves, and all the tenderness kept behind their levelheaded, self-protective facades starts to trickle out. What I'm suggesting is that John Cusack has brought what might be thought of as a traditionally feminine approach to the male romantic lead.

In a sense, every romantic lead he's ever played is the spiritual descendant of Lloyd Dobler (his character in "Say Anything ..."), each one doing his damnedest to hang onto his enthusiasm, his belief in romance. And that's why the little fissures of disappointment that run across Cusack's face in "Serendipity" when Jonathan is trying to talk himself out of searching for Sara cut so deeply: They're the look of someone tamping down his spirit, settling for less than he can be. When he finally finds the sign he's been looking for and decides to go after Sara, he pats the arm of his buddy (Jeremy Piven) and in that small gesture manages to convey a man coming back to himself, not sure if everything is going to be OK, but one who has rediscovered who he is. And Cusack has the gift of playing the most naked emotional moments as a form of bravery. He has a closeup in the film's climax that is a small marvel of welled-up emotion being released, and yet he never pushes a thing, never descends into mawkishness.

Kate Beckinsale hasn't been this warm a presence on-screen since her debut in "Much Ado About Nothing," and she wasn't nearly the actor then that she is now. She looks lovely and alive and open in a way that contrasts with her usual, somewhat icy composure. Beckinsale plays Sara's belief in fate as a defense mechanism, a way of dodging the uncertain. And the movie needs that edge of uncertainty because in some ways, the belief in fate is one of the things that has scuttled so much romantic comedy. Instead of being a chance, even a danger, love, in contemporary romantic comedy, has become something you settle into only when you're sure it's the right thing. And that completely undermines the spirit of adventure that was always at the heart of romantic comedy. I wish the filmmakers had found a way to make Sara's belief in fate -- and the way Jonathan comes to share that belief -- funnier, sillier, a form of the pixilated madness that defined the lovers in the great romantic comedies.

Chesholm, who has always shown a taste for the fanciful and the fantastic, isn't inclined to see it that way. We can be thankful, though, that he's not a sappy romantic. "Serendipity" has been dressed in an air of upscale romantic melancholy. Chesholm overuses the source music at times; at others, his choices, like Nick Drake, are right on the money. The movie suggests that cinematographer John De Borman may have quite a range. In Michael Almereyda's "Hamlet" he shot Manhattan as a collection of inhumanly beautiful canyons in which human beings had precariously nestled. In "Serendipity" he indulges the fantasy of New York as all twinkling lights and tree-lined streets, the kind of vision that makes you feel pampered just watching it.

And the movie has a couple of gifted second bananas. As Sara's best friend, Molly Shannon, whom I confess I find only sporadically amusing, is held in check. Jeremy Piven also holds himself in check, getting laughs with his consistent underplaying. And as a Bloomingdales' sales clerk, Eugene Levy suggests one of the strange birds hatched from the same egg that produced such stalwart comic oddballs as Eric Blore and Edward Everett Horton. He's every minor martinet who's ever held a service job, the myopic master of the little kingdom he surveys. Anger management training has by now become an accepted form of therapy. Levy, the overlord of his puny domain (men's Hermès ties), suggests a whole new area of therapy waiting to be tapped: persnickety management training.