The one war we can never win

We aren't just angry at terrorists; we are furious that we are not immune to death. 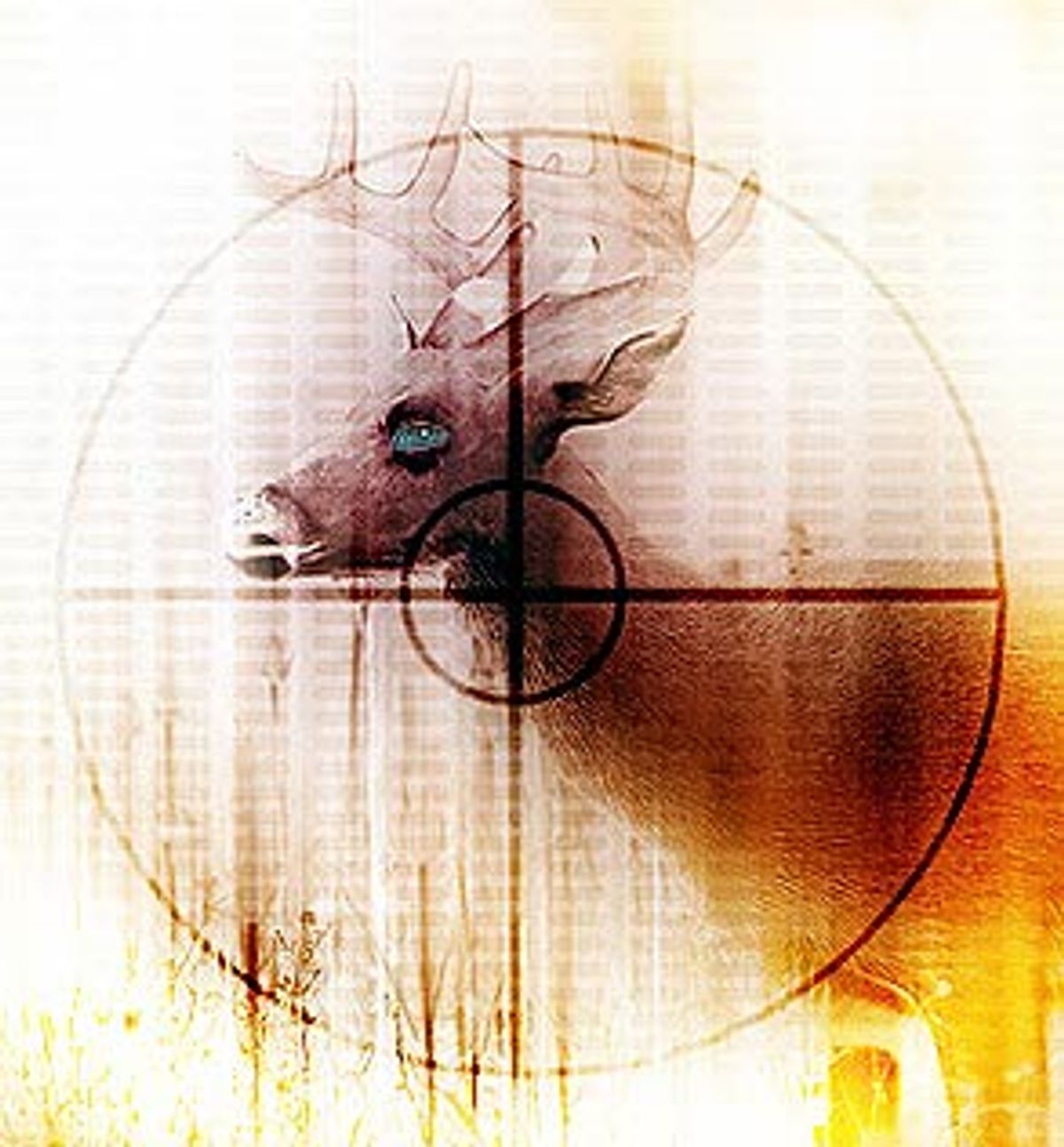 I drove over the Sierra Nevada on Highway 4 Saturday, Sept. 22, the opening day of deer season. Pickups and campers occupied every wide spot on the highway; men prowled the road with rifles, searching the ravines and hillsides for something to shoot. I sped up slightly, even on the narrow, curving road, as if I were trying to run a gantlet of potential death.

The scene of deer hunters gathering in the mountains always reminds me of my youth, when my dad took me hunting on the Sonora Pass. I was 15 when he gave me my first and only deer rifle, a 270 Remington bolt action with a scope, a gun with a very high muzzle velocity, "capable of bringing down a buffalo," he said. Two years later, I took my last trip with him and his brother and two other men into the mountains.

We played poker the night before around the campfire, big men and me, feeling enthralled once again by our manhood and our temperament and involved in a near-silent odyssey. The next morning we awoke before dawn and hiked up the long ridge to our respective stations, assigned by Dad, who was always the chief strategist in such things, even more than his older brother. He whispered for me to "stay right here until you hear my whistle," and walked down the ridge until he was out of sight.

We were all strung out along the ridge in solitary vigils. I huddled down against the cold morning wind, gripping the gun and straining my eyes to see down into the ravine below me, not sure of what I would do or how I would feel about it if I actually saw a deer.

I never told my dad or anyone else what happened that morning. Rather than whistling, he came back by about two hours later, patted me on the back and told me, "There don't seem to be any deer up here right now; we might as well go back down." I stretched out stiff legs and followed him down the mountain.

On the trip home, I sat up straight between dad and his brother, moving my legs every time the gearshift knob ground into a higher or lower gear coming up out of the Melones grade. Neither of them said anything, and I eventually nodded off at the whine of the motor and the grinding of the gears, losing the sensation of shoulders touching on the front seat of the truck. My uncle dropped us off at our home in Angels Camp without saying much, and drove away.

I was never quite certain exactly what happened up on the ridge, even though I tried many times to conjure up the details, but what I think happened is this: Sometime after dad left me, while I was staring down into the ravine and gripping my rifle tightly to keep my hands warm, I think I saw a giant buck slowly walk across the ravine right down below me, moving from my left to my right. The light was pale and evanescent, like a gauzy dream, and the deer could easily have been imaginary. I remember tightening my grip on the rifle, even raising it slightly without actually sighting it while I watched the deer walk by me.

I remember fleeting bits of debate as I tried to decide what to do. The notorious "buck fever" had been a topic of conversation during the poker game; one of the big men even admitted to having had a case of it years before. Buck fever is a kind of paralysis that sets in sometimes, almost an enchantment, like delirium of the deep, that results in a complete failure to act and subsequent ridicule and embarrassment if the sufferer is found out. I could not deny to myself that I was indeed enchanted, watching the vaguely outlined deer with its antlers high, upwind from me, unaware that it was about to be killed. It was incredibly beautiful, even if I wasn't certain that it actually existed.

I put down my gun and decided that I was never going to go hunting again and that I was never going to tell my dad what I thought happened. The old gun eventually rusted out in the barn and was finally stolen sometime last year, approximately 45 years after the incident on the mountain. My uncle and my dad are long dead, so there is nobody to chide me about buck fever.

But it wasn't buck fever. It was a decision. As corny as it sounds, it was a decision not to inflict unnecessary death. At age 17, I didn't know anything about death except the intense grief my mother expressed when her younger brother died and the feeling I had when my dog was run over by a truck. I knew that death caused pain, but I was years away from grasping the human existential condition and one of the ultimate laws of the universe, that death is inevitable and that it does no good to fight it.

But I suddenly knew what it would feel like to deliberately change the condition of any deer in the world from a stirring sight of vitality to a smashed, bloody pulp. The awareness came from nowhere. It just happened. Of course I am not certain that I actually saw a deer that morning. It doesn't matter.

The image of that airplane, like a slowed-down bullet heading for a direct hit on the World Trade Center, is like watching death about to happen. It is the ultimate stalking movie, with people suddenly sent, mostly without warning, into a bloody oblivion. The scale of it is actually comparatively small, considering Gettysburg, Verdun, Stalingrad, Hiroshima, Auschwitz, Vietnam and all the other wars of human history, the results of deliberate strategies and policies. Fifty thousands bodies are pulled out of car wrecks in the U.S. alone every year, "accidents" of the industrial age. Typhoons, earthquakes, fires and tornadoes kill thousands each year. The annual body count is enormous. The accumulated grief is a symphony of the unacceptable.

Some of the "indifference of the world" is accompanied by intention and some just seems to come with the territory, but all of it is natural if we consider human beings to be part of nature, and human consciousness to be the latest form of evolution.

I didn't know up on that ridge that I was trying to combat death itself, not be a party to it. I didn't realize that I could only postpone it for that deer until somebody else killed it or it died of starvation or old age.

Now I know that the denial of death is the great cultural lie we tell ourselves everyday unless we are deeply spiritual mystics who have integrated an awareness of death into everyday life, and that our panic about terrorism is linked inextricably with our macabre curiosity about anyone who can not only commit suicide but try to take others with him. Such a being is the ultimate other, an absolute alien, the one who embraces death and actively encourages it. It is bad enough to die. It is completely unacceptable to kill or be killed, seemingly for no reason, most particularly if it is somebody in the process of trying to kill us.

But there is never a reason for death that truly works for us emotionally, even though our predominantly Christian culture believes that Jesus defeated death. When death strikes so vividly and so massively, as on Sept. 11, we suddenly become aware, again, of our fundamental condition. The world we take for granted is interrupted. It is a fantastic source of surprise and anger that we could be so wrong about life, that it could be that cruel and indifferent.

Our anger is not only directed at Osama bin Laden, but at a horrible recognition that here, in America the invincible, we are not immune from death, that buildings sometimes come down suddenly, that sometimes people die in large groups, that consciousness is not always benign and rational, that civilization has not always sublimated violence and actually produces it, and that we are not immortal and can be snuffed out.

It doesn't matter very much if death is the result of a long, slow deterioration that leaves us gasping for a last breath on a hospital bed or the consequence of a smashing blow to the head by a madman, even if the latter seems far less acceptable.

So we go to war against this madman, this evil, and in so doing, we may kill many more people, take them down with us as we go. A war to end war. A war to end terrorism. A war to bring peace. And it is a war we will never win, because it is, really, a war against death, and death will always win. We can only really tell death, "I accept you, finally, as a natural part of existence, whether the result of intention, accident or old age, but I just won't be your co-conspirator in this life."

So, I construct a measured defense against death: I take care of my health, oppose policies that lead to war and terrorism, buckle up my seat belt. And I do not replace the rifle.

David Alford lives and works on a ranch in the Sierras, near the town of Avery, CA.