From the living room of a close friend and advisor to Osama bin Laden, Sunday's attack seems like just the beginning of a much greater battle. 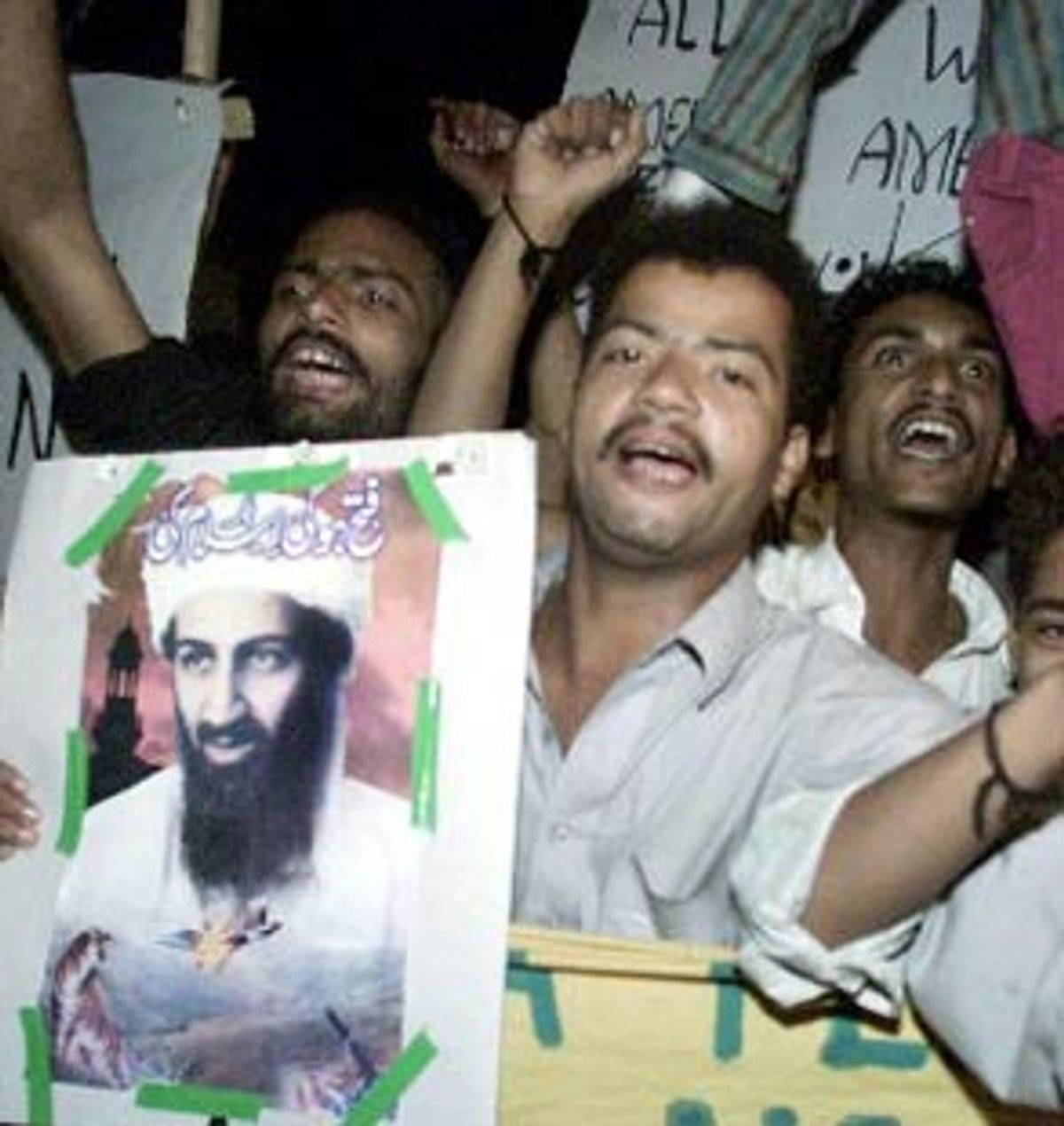 "All Muslims will be all out for jihad," he says."Inshallah." God willing.

These words don't come from a fringe bearded man with a turban and AK-47 next him, speaking on a video from a cave somewhere in Afghanistan. They come from a man, Khalid Khawaja, who is a friend and longtime advisor to Osama bin Laden. A retired Pakistani Air Force squadron leader, Khawaja fought with the mujahedin beside bin Laden to drive the Soviets from Afghanistan. In July, CBS News quoted him as saying, "America is a very vulnerable country," and that "Your White House is the most vulnerable target. It is very simple to just get it." To the world, he surely looked like just another scary dhari walla, bearded man.

But sitting here in his sweeping Greco-Roman style home with Corinthian columns, gold-gilded bedroom furniture and a poster of a grinning Garfield in his teenage daughter's room, Khawaja and his family can be sure that there are many others in Pakistan who might not take the street in protest Monday but feel the same way. For if you think there is universal support for what appeared to the entire world as harmless-looking green flickers of light on CNN, then peek into the homes of this city. Walk through these streets where the sweet scent of a flower called rath ke rahni, queen of the night, seeps deep into you.

No matter what qualifications come from President Bush or the caveats put on the attacks by Defense Secretary Rumsfeld. And no matter that, as British Prime Minister Tony Blair instructed us Sunday, "Islam is a peaceful and tolerant religion, and the acts of these people are contrary to the teachings of the Koran." The bombings will inevitably seen as an attack by the West against Muslims by many who feel deeply that the Quran teaches that all Muslims are brothers and sisters.

In Khawaja's living room, they sit around the television tucked into a large wooden wall unit, growing quiet as the Al Jazeera videotape of a frail-looking Osama bin Laden is broadcast.

The Pakistan government is the first -- and at this point, only -- Muslim country to voice support for the attacks, and reportedly opened its airspace to allow fighter jets to storm overhead. But that's the government. After two weeks of conversations with many from here and neighboring towns, from nokars (servants) washing dishes, to retired military officers, housewives and professionals, it's clear the minority in the streets protesting against any U.S. operation against Afghanistan very much represents a larger constituency. Among them, there is great empathy for the Taliban and Osama bin Laden, and anger and frustration over issues of Western foreign policy -- Israel, Iraq, Palestinians, Kashmir and Bosnia. Most of them aren't going to do anything about it except share their bitterness with their family and friends.

But inside Khawaja's home, there is a sense of faith, anger and mourning, and a need for action. Though the Taliban says that Osama bin Laden is still alive, the sense is that many uncles may very well have died.

"Assalamalaikum," the greetings come gently. Peace be upon you.

"Walaikumsalam," comes my reply. And peace be upon you.

Khawaja's wife glides forward to offer an embrace. Once an aspiring lawyer, she is tall, graceful and eloquent in Urdu and English, as is her husband. She is grim but optimistic about those that died in the first wave of attacks.

"They have become 'shaheed,'" -- martyrs, she says, pulling her dupatta over the gray hair that gently frames her face.

During another rebroadcast of Osama bin Laden's statement, Khawaja slips to the ground in his chilwar kameez. He leans forward on a squat table, with a tissue box lined with red tulips resting on top. His 10-year-old son comes out from the kitchen with a plate of "dhal chawal," lentils and rice, to eat with two spoons. He is a fan of Disney's "The Lion King," he says (the first one, he makes clear, not the sequel). Khawaja's elderly mother, who once taught in a girls' school, sits beside the TV, draped in a white cotton flowered dupatta, a necklace of brown prayer beads, a thuzbi, hanging from her right hand.

The wife reads the flash excerpt from bin Laden's statement, referring to the hijackings of Sept. 11: GOD HAS GIVEN THEM BACK WHAT WE HAVE RECEIVED.

Khawaja is calm. He is mostly quiet.

His wife is calm, too. Muslims have to choose their side, too, she says. With Allah. Or not. Khawaja breaks his silence, echoing the message from bin Laden most sure to haunt Americans. "No American is safe now," he says. "Americans are not safe. They have started this jihad."

This is rhetoric that could be easily dismissed, painted onto a white sheet in a street march in Islamabad's twin city of Rawalpindi. It will, in fact, likely show up on a placard on the streets Monday. The White House markets this as a war against terrorism. The people here know that -- they watch CNN, too. Khawaja's mother leans toward the TV to read the banner: WAR ON TERRORISM.

But this isn't the way it's seen over here. "They have killed our Muslim brothers," Khawaja tells his wife. "Now, we will react. Tomorrow it will not happen. It will happen over time. This is a lifelong war."

The anger isn't just at the West. It's against the Muslim governments that run their countries as dictatorships and monarchies. "We have to overthrow our Muslim states. There was only one Islamic government and now they have attacked it."

CNN's Christiane Amanpour comes on the air from here in Islamabad. She explains to viewers that most Muslims don't agree with the Taliban "fundamentalists."

"Ch!" comes the answer from Khawaja's wife in this culture's universal exclamation meaning utter disdain: What a shame. What a pity. How terrible. How horrible. "This woman has so much anger in her heart for this 'fundamentalism.'"

They, too, study the tape of bin Laden, which appears to be taped during the day in sunlight, and wonder when it was taped. But it doesn't matter much to them; they feel his message is clear.

On TV, Rumsfeld explains that food is also being dropped on Afghanistan, as relief aid. Giggles break out when someone compares it to a Quranic account, manwasalva, of God dropping food from the heavens for Moses when he and his people were hungry.

Ten-year-old Mohammad is curious about something else. He looks at the sign behind the defense secretary that says, "Pentagon." He thought the Pentagon was destroyed.

Tony Blair, whose youthfulness is often remarked upon in the West in innocent terms, like that of a schoolboy, fills the screen and lauds the British military's role in this war. "He looks like a terrorist," comes the comment from this room.

Nobody can say what will happen for certain with this war. It looks by all accounts that this battle will be over, perhaps, in days, but those here are convinced a wider war has sprung from it.

"We will see, Inshallah," says Khawaja.

His wife nods. "Allah will fight this war, Inshallah."

I first learned about the bombings earlier that day at the home of relatives here in Islamabad, because of a call from America. "War start ho-guy-yah." War has begun, my uncle says as he hangs up the phone.

CNN reports air strikes on the Afghan cities of Kabul and Kandahar. BREAKING NEWS flashes over the screen.

"Yah Allah!" comes the sigh from my aunt. Oh God.

This is a house much like other Pakistani houses with a divided family, partly in Pakistan, partly in the United States -- the only reminders are wedding photos laminated onto blocks of wood hung on the wall.

CNN flashes the image that has become the poster sheik of terror, Osama bin Laden.

Razia Phuppi, an aunt, is something over 80 years old. Nobody knows exactly how much more than 80. They didn't record births in her day. She is a subdued maternal version of my dadi, my father's feisty mother. She drifts her lithe body out of the room, leaving the English CNN dispatches to listen to BBC Radio's crackled transmissions in Urdu in the bedroom. America created Osama bin Laden, she says. Now, they want to destroy him. She laments the flip-flop.

She prays for little damage. "Jahldee hoe dho." Let it be quick.

Another cousin bent closely toward the screen is a modern, global woman. A graduate of the University of Hawaii, she keeps Gap body cream by her bathroom sink and talks wistfully of her love for the New York subways. She watches the flashes of light across the screen like muted starbursts.

The crickets have gone silent as the morning comes to Pakistan. An alarm clock goes off in the house next door. A car honks. The TV is back on with talk of Dick Cheney being moved to a secure location.

My father, in Morgantown, W.V., sends me an e-mail. His subject line: "STARTED!" He reports that my 8-year-old nephew Samir says, "War is bad." My 10-year-old Safiyyah, "It is horrible." They should now be tucked into bed, but refuse to go to sleep. "Pray Allahsubanathala," a praiseworthy adulation of God, my father writes, "for Peace." Then he signs off.

The call for morning prayer spills into the air here as light begins to break across the sky. The call for prayer, however, competes with the chatter rising from Islamabad living rooms, the voices of TV talking heads in America, where it is now night. What is black there, is very much white here.