Biowarfare experts say the nation shouldn't worry that two men -- and now possibly a woman -- tested positive for exposure to the mysterious bacteria, but panic is proving contagious. 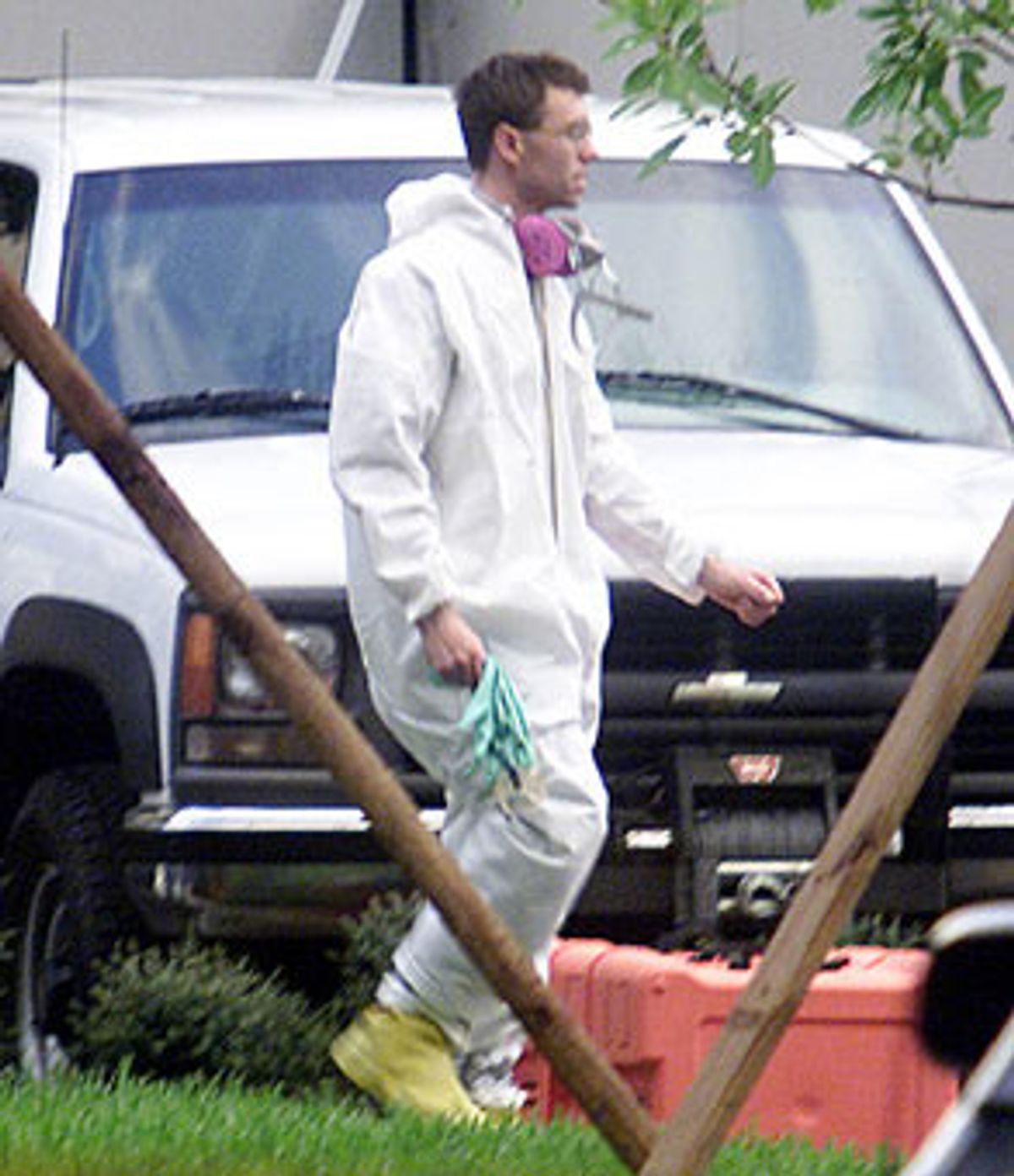 It's still too soon to know what happened in Boca Raton, Fla., where one man has died of anthrax and a co-worker was found with traces of the deadly bacteria in his nose. Although the FBI took over the investigation, sealing off the office building where the men worked and where additional spores of Bacillus anthracis were recently detected, some of America's most notable anthrax and biowarfare experts tell us we still don't have reason to worry.

Certainly the story took a strange turn Monday, when Ernesto Blanco, a 73-year-old mailroom worker at American Media -- which owns the National Enquirer, the Star, the Globe, News of the World and other papers -- was found to have been exposed to anthrax. Just last week, Bob Stevens, a Sun photo editor, died from the disease. And the New York Post reported Tuesday that David Pecker, president of American Media, claims a third employee from the same office building has tested positive for anthrax exposure. Anxious American Media workers were issued 15-day supplies of Cipro, the antibiotic most effective against anthrax.

But biowarfare experts say there's no evidence the outbreak was a result of terrorism. "The United States government deserves this panic -- the public has been uninformed," says Milton Leitenberg, senior research fellow for the Center for International and Security Studies at the University of Maryland. "But it's utter gibberish what [former Secretary of Defense] William Cohen has been saying for years [about imminent biological terror attacks]." Anthrax remains hard to grow, and hard to spread, notes Leitenberg, who has spent the last 35 years studying chemical and biological warfare in his arms control work at the Stockholm International Peace Research Institute, the Swedish Institute of International Affairs and Center for International Studies' Peace Studies Program at Cornell University.

Last year he wrote a paper, "An Assessment of the Biological Weapons Threat to the United States," attempting to discredit mounting fears of an imminent biological attack on U.S. soil. Leitenberg argues what we've been hearing steadily but quietly for years: Biowarfare is hard to pull off. Therefore the appearance of anthrax in Florida, he now says, should be approached skeptically.

"The first case [in Boca Raton] began with meningeal symptoms, not shock," Leitenberg says. This would likely indicate intestinal, rather than inhalation, anthrax. Intestinal anthrax generally signals a natural infection, as opposed to a deliberate one.

Stevens' autopsy could answer some questions, he notes. "They're also going to look for lesions in his gut and ... between the lungs," Leitenberg says. Lesions in the gut would be further evidence of a natural infection.

In addition to the autopsy, an identification of the particular anthrax strain will answer many of our questions, Leitenberg says. Many different strains exist, and differ vastly in their toxicity; identifying the specifics about the bacteria found in Boca Raton could take us closer to finding out what happened.

"What's crucial is what Los Alamos [National Laboratory] tells us about the strain," says Jeanne Guillemin, sociologist at Boston College and author of "Anthrax: The Investigation of a Deadly Outbreak." "We should then be able to know which country it came from."

Then again, she adds, isolating a country of origin isn't direct proof of terror. If the strain came from Iraq, for instance, that could simply mean that someone accidentally brought the bacteria over on the fibers of a rug. Guillemin points out that America's scant experience with accidental anthrax infections reveals a pattern of almost unbelievable coincidence: a woman getting spores off her bongo drums in one case; a football player hitting the ground and inhaling some soil in the other.

"My first guess is that it settled out of the air," she says. "It would be strange if there weren't spores elsewhere in the office."

"I tend to agree with Milton," he says. "He's been watching these things for many years."

Still, Croddy acknowledges, parts of the case don't add up yet. Croddy, for instance, thinks the victim inhaled the anthrax.

"It seems fairly clear that it was inhalation anthrax," he says. "And a carcass [a common mode of natural anthrax transmission] is unlikely to generate aerosols."

Bruce Clements, associate director of St. Louis University's Center for the Study of Bioterrorism and Emerging Infections, told the Associated Press he doesn't think the infections were part of a major attack.

"If you had a large release (of anthrax spores), you wouldn't see just one case," he says. "We would see quite a few cases."

But none of the experts could rule out the possibility that the anthrax infection was an experiment, a deliberate but small-scale release. It's famously difficult to grow a good strain of anthrax -- but could the America Media Inc. offices have been a guinea pig for something much larger? "It's possible someone was testing a solution," Croddy says.

Indeed, a few hours after Salon spoke to these experts, Newsweek reported that the FBI is looking for a former intern at the office, of Middle Eastern descent, who sent an ominous e-mail, hinting at "something that he left behind."

Nightmare scenarios notwithstanding, Leitenberg, Guillemin and Croddy bristle at the kind of attention Boca Raton is getting. Even if was deliberate, they say, it's small and contained, and biological weapons remain extremely difficult to manage. So as Attorney General John Ashcroft steps up the warnings and 300 employees from the infected Florida office building get tested for bacteria, at least a few experts remind us that a major anthrax attack is still unlikely.

"I'm leery of all the fear-mongering," Guillemin says. "America is very healthy. Anthrax goes for older people. Smallpox goes for the weak. We could afford to focus more on other risks."