Drafted into the cult of war

I am not obsessed with the battle; I am the battle. 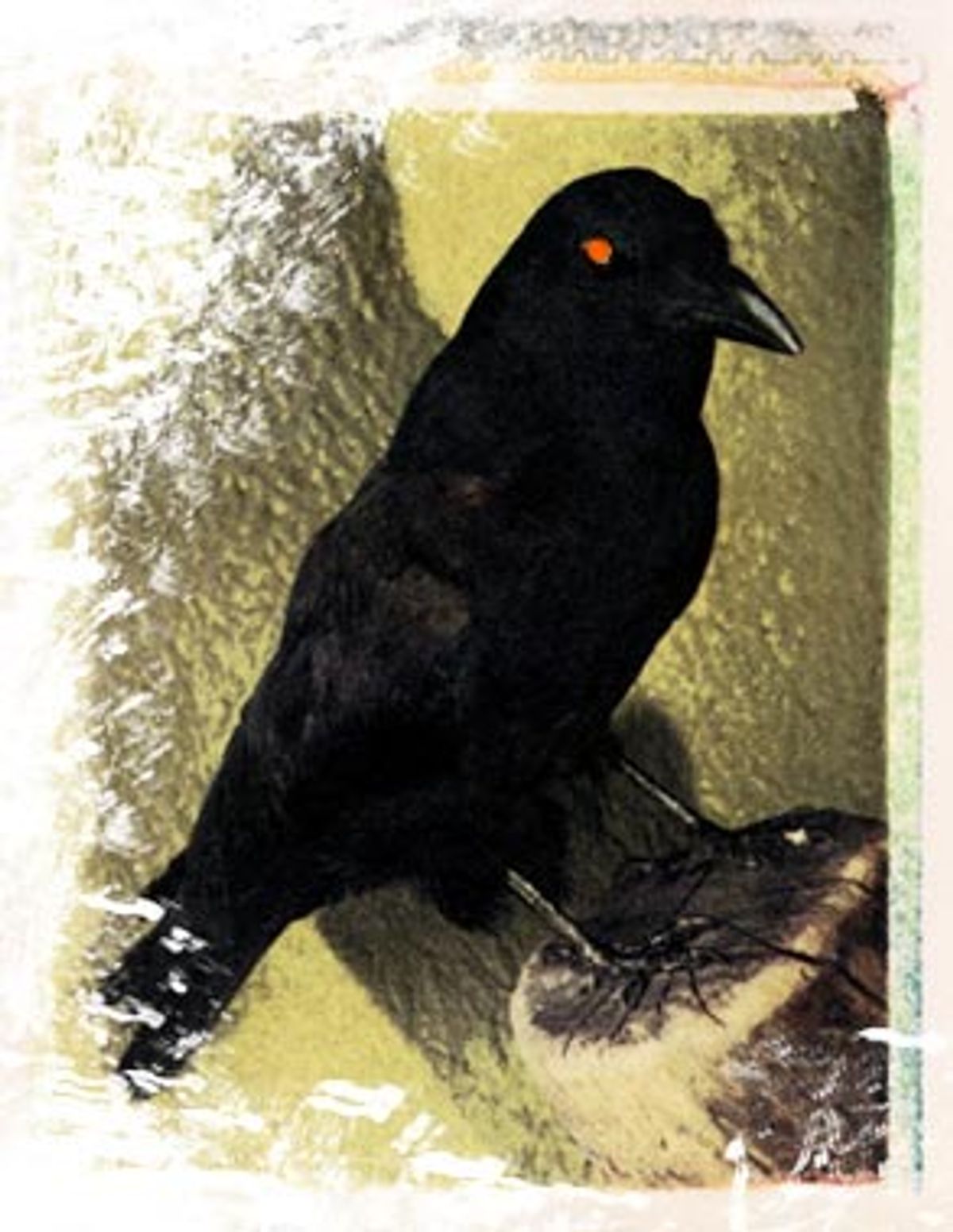 We were all driving back to Oakland, Calif., the morning after the wedding, through the suburbs and Silicon Valley, our suits and dresses on our laps. Then some crows flapped down from a tree and at that moment we heard that the bombing had begun. If there is a single instant when the hermit lets the fabric drape thick over his windows, when the quicksand gets its final grip around the explorer's chest, then it happened for me there in the back of the van, as the radio crackled and the birds preened grimly on the street.

NPR didn't know much yet: Bombs had hit Afghanistan from the sea and from land. It was dark there. Our planes dropped food. Osama bin Laden wasn't dead. In the absence of a thorough report, I looked out my window and felt myself join a dark, luckless cult I might not leave.

From an automotive standpoint, nothing actually separated the front seat from the back. But that morning something like lead fell down around my corner of the van. Others speculated, or tapped their feet, or recalled moments from the previous night's wedding. I said not much and listened to the radio.

We drove. A car of friends passed us on the left. Missiles from submarines were blasting out from waves and drying off en route to Afghan buildings. The car beside us made funny faces. "You guys look great," our driver yelled to them, and the echo in my head against the missiles was tinny at best. I did not think those guys, or any guys, looked great. I thought, instead, that the countdown had finally finished and we'd now been fired deep into space. More than that, we were the tragic kind of astronauts -- the ones who ought not to burn dwindling oxygen saying foolish things.

If your personality has just a little room, I'm learning, this war will move in and spread out. It just visits at first, but soon it's on the lease, and eventually you can't recall life without it. Your personality isn't simply overwhelmed by the war; it is the war. Such transmogrification would make good science fiction if science fiction could somehow matter at a time like this.

"At a time like this" enjoys special prominence in the melodramatic vocabulary of newly transmuted war hosts. We get lumped in with the paranoid, the kooky and the frightened sometimes -- sometimes for good reason. Other times we're taken for the info addicts, uncomfortable with the amount of time lost switching from CNN to MSNBC. But these categories fail to discern our lack of nuance. We simply think about war all day. If two hours pass without a thought about it, the feeling is that of forgetting house keys, and we pat our pockets.

I belong to a cult whose ideology remains obscured. So far we believe in dread and cable news. We are, in part, the cult of updates, the cult of answers. We are not the cult of life as usual. We forget to check the transmission fluid. We're late with the bills because who can think of bills at a time like this? We don't do long-range planning because we can't picture the long range. If all the bleakness proves misguided, we say, terrific. In the meantime we catalog doom scenarios.

The architecture of doom is as secret as that of terrorism itself. One can identify specific fears -- dead American soldiers, dead Afghan civilians, smallpox at the shopping mall -- but the real dread comes from the unchartability of it all. The dread can reconfigure every day, and could stretch for decades. It could rest and then revive with the single lurch of an airplane three years from now. The appropriate analogy is that of the nightmare within the nightmare.

I had made progress since Sept. 11, had begun taking the recycling out on Tuesdays again and remembering to talk about things besides terrorism. But the interlude also allowed me to let my guard down, and once the drawbridge had been lowered, it became that much easier to admit the mongrels.

We drove onward to Oakland -- there is no other way to mark the beginnings of war when you're on a freeway. American flags hung from overpasses, and mysterious, anonymous tractor trailers rumbled beneath them, hauling either hamburger buns or anthrax spores. Above, a small prop plane angled toward the city; it was a crop duster or it was not.

Everything outside the immediate purview of the cult either gets appropriated or overlooked: A sunset stubbornly incompatible with an anthrax plot becomes invisible. A gradual blinding began in the car, a narrowing of vision that rendered the streetlights and background mountains immaterial. Things that do not predict the outcome of the war lose their identifying characteristics. If it can't speak to my agenda -- the safety of loved ones, say -- I can only barely make it out. I am an extremist.

There are deeper implications for this entire arrangement. The situation is that of an existential wag-the-dog scenario, in which a massive war (and the potential for retaliation) distracts me from life itself, and all of life's thank-you letters, birthdays and walks down by the field across from the fair. At an elementary level, this phenomenon has been detected by instruments of localized capitalism. Get back to your normal life, our mayors urge us, spend!

But we're not just neglecting to shop. We can't remember why those stores were built in the first place. Against a backdrop of approaching disaster, everyday scenery loses its familiarity and soon one is on the moon. As a boy in Washington at the end of the '70s, I saw an early version of this cult, those men and women sucked far into the world of Vietnam. These were the people who, for one reason or another, chose to spend their lives in tents in front of the White House. Some had political agendas, while others were just being Vietnam. Obviously many of them had actually fought in the war, but not all. They went crazy, people said, as compassionately as possible. But crazy didn't explain it.

One wonders, in 2001, whether one is headed for the tents. At a party recently, I met a nice woman and asked if we could talk about biological weapons. No, she said. So we stood there in the kitchen and looked at each other. I tried to think of something besides war. What do I like? I asked myself. What do I enjoy talking about? Presumably I have certain interests? I could recall no interests.

In the end, to fill the silence, I told her about the frantic black lab I'd seen at the beach last month, swimming farther and farther out to sea. My friends and I had joined the chorus of whistlers and yellers, waving crazily to lure the frightened dog back to shore. It was 45 minutes before he finally found his way back, but when his tearful owner spread her arms for a big wet hug, the animal instead bolted down the beach as though mad from the sea. The episode had been amazing to me before Sept. 11, but I nearly fell asleep telling it now, and rushed through the good parts. We should have talked about biological weapons, I said finally. Yes, she said.

Back in the van, we finally reached Oakland and went home. We carried our suits and dresses inside, and drank tea in front of the television. Later other friends came over, and we walked in the neighborhood. We walked down 7th, then up Wood and then over on Willow. Let's go back, I said, and we did, and watched more television.