Disturbed preach a message of tolerance as their fans chant U-S-A, U-S-A. 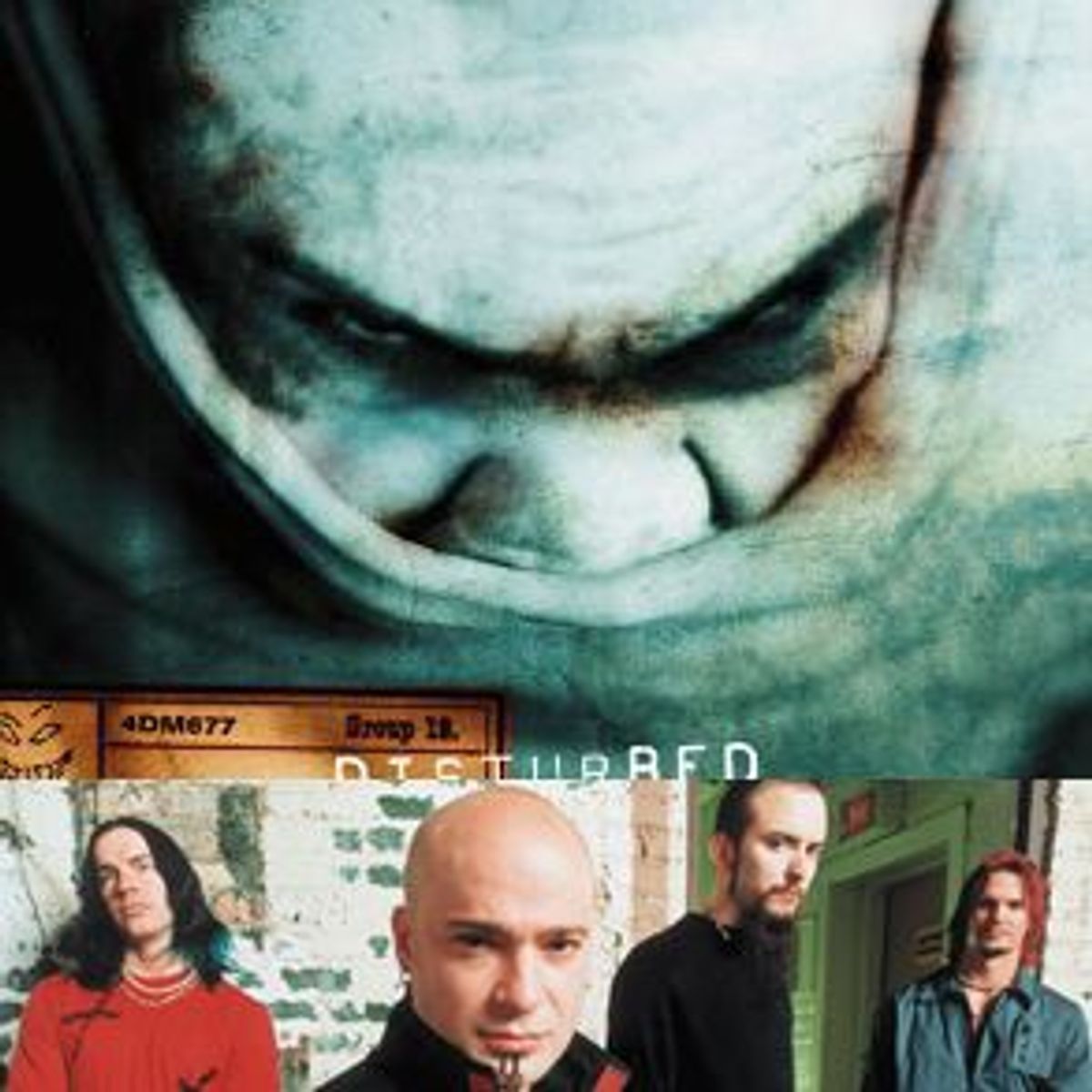 The cover of the Chicago nü-metal quartet Disturbed's platinum debut album, "The Sickness," depicts a clearly pissed off dude. His head is smeared with blood and tightly wrapped in fabric that covers his mouth and nose -- a straightjacket for the head.

The cover, as well as the band's name and the title of their album, paints a picture of an angst-ridden, introspective, alienated, disconnected experience similar to that espoused by the dozens, if not hundreds, of hyper-alienated, violent, alpha-male nü-metal bands that have sprung up after Korn and Limp Bizkit.

Lyrically and imagistically, nü-metal bands seem, for the most part, to be stuck on an apolitical thematic treadmill. The principal concerns are the oppression of the individual, fucking or a lack thereof and violent revenge fantasies. And child abuse. All of these bands seem to sing about child abuse a great deal.

These bands, who more often than not hail from Pleasantville-like suburbs, strive to imitate the thug-life images of their ghetto-borne gangsta-rap heroes. Lacking real-life experience in the thug realm, they resort to erecting their own houses of pain. Limp Bizkit's performance at Woodstock '99, during which a woman was raped in the mosh pit and which concluded with the band inciting a prelude to one of the stupidest and most mindless riots of the 20th century, is typical of the prevalent ethos of your average nü-metal band. Slipknot, one of the hottest nü-metal acts currently on the scene, has made a name for itself in large part because of its stage show, which sometimes features band members smearing vomit and fecal matter on one another.

On the L.A. stop of their "Down With the Sickness" tour at the Hollywood Palladium on Friday, Disturbed demonstrated to a sold-out crowd that while they round many of the same thematic and sonic bases as their contemporaries, they are an altered nü-metal beast, a heretofore unseen nü-breed. Their music is driven by a social conscience reflected by their atypical stage show and between-song banter.

Raging against the machine and so forth

Although attempted by a few others, Rage Against the Machine was the first metal band to successfully marry rock and hip-hop, and they did so with an overtly political agenda. While it was a bit difficult for savvy concertgoers to stomach Rage guitarist Tom Morello wearing his favorite "commie" baseball cap after shelling out 20 late-capitalist dollars to see the band perform, the band's lyrics and overt calls to political action were undeniably positivist and progressive. They used their videos, concerts and public appearances to rail for causes ranging from freeing Leonard Peltier to supporting the Zapatista rebels in the Mexican state of Chiapas to the anti-WTO jazz that became all the rage with kids after Seattle.

Since Rage sprang on the metal and pop music scenes more than a decade ago, their sound has been co-opted, retooled and warped by an entire generation of popular rock acts. In the interim, punk rock has become a phrase you might find on a kitschy $70 T-shirt at Fred Segal, indie rock has become a haven for belly-button gazing fashionistas more concerned with the workings of their Line-6 guitar pedals and how tightly their Diesel jeans fit than saving the world. The political edge that Rage brought to metal has all but disappeared. In the gap, self-absorption, self-indulgence and personal suffering have become the predominant modes of discourse.

Disturbed's debut album offers few clues that they might be any different from Staind, POD, Linkin Park or any of the other nü-metal bands currently topping the charts -- and nothing to indicate that they might be part of the activist Rage tradition. With lyrics such as "Get psycho/I wanna get psycho/Wanna get psycho/Run you little bitch" ("Meaning of Life"), and "Bring the violence/It's significant to the life/Can you feel it?" ("Violence Fetish"), Disturbed are clearly not breaking any new ground in subject matter. Sartorially, they have the standard second-gen nü-metal look of Zoolander-esque tight, black designer clothing instead of the rap-inflected urban street wear favored by earlier nü-metalers. And the singer, Draiman, sports the shaved pate that has become de rigueur for nü-metal frontmen during the '01 season.

During the moments before they took the Palladium stage, a 20-minute prerecorded commercial for up-and-coming nü-metal acts Pressure Fortified, Headstrong and Logic 34, presented by Tower Records and voiced-over by Anthrax frontman John Bush, soothingly wafted over the sweat-soaked crowd.

As the infomercial ended, the lights dimmed and hundreds of shirtless 20-somethings and teens with shaved heads, goatees and tats galore -- the current nü-metal fan uniform -- swarmed toward the mosh area in a routine that has become something of a normalized sacramental experience for the average testosterone-fueled music fan during the past 10 years.

Instead of the band taking the stage, a jumbotron-sized video monitor slowly, silently glided down from the ceiling. The audience fell quiet. After a few seconds of waiting, a classical score blared over the sound system and a series of utterly shocking and, well, disturbing images unfolded on the screen.

A hit parade of ultra-violence, evil and hatred throughout history flashed on the screen, including depictions of Christ on the cross, hangings during the Salem witch hunt, race riots during the Civil Rights movement, lynchings in the South, Kurdish victims gassed by Saddam Hussein in Iraq, victims of the Armenian genocide, and images of Holocaust-era atrocities including bodies piled high at concentration camps. While these images streamed, a number of different textual statements popped up on the screen including: "Arrested for being different," "Imprisoned for being different," "Punished for being different," and, ultimately, "Murdered for being different." The crowd responded to the horrific images by chanting "U-S-A, U-S-A, U-S-A" over and over again, finally swelling up to a hysterical pitch. Five young women dressed in identical black tank tops climbed atop their boyfriends' shoulders at the center of the venue and raised their hands high in heavy metal salutes that were mirrored by hundreds of other concertgoers.

When the video was over, the screen zipped up silently and the black curtain concealing the stage rose to reveal two SS-looking guards leading singer Draiman toward a translucent, rectangular chamber. Once placed inside, the chamber filled with gas and Draiman mimicked struggle before collapsing to the ground. As he crumbled, the band launched into its hyper-aggro sonic assault and Draiman sprang forth from the eerily Spinal Tap-ish prop to join the band.

Carnivalesque actions of this sort are part of a long tradition of the theater of the grotesque in rock performance; Marilyn Manson is perhaps the greatest practitioner in the modern rock era. But most of these fake blood-soaked tantrums -- including those of Manson -- are meant to shock and provoke, more or less positing the same "No Future" message that disgruntled youths have been hearing from their angry rock heroes since Johnny Rotten expressed the sentiment a few decades back.

Disturbed's introduction, while focused on the problems facing the alienated individual, was noteworthy because it recontextualized this alienation in relation to global politics and history. And while the video didn't posit any answers, it did force everyone in the venue to confront difference and oppression in a broader context than they would find in their own bedroom.

After howling and growling through two songs filled with propulsive, dark beats, diggity-diggity bass lines and syncopated blasts of guitar distortion, Draiman -- clad in tight, black pants, black boots and a tight, black tank top wrapped around his thick, muscular upper body -- paused in front of a set that simulated the Berlin Wall, replete with concertino wire, roving searchlight-type Kliegs and two mummified effigies dangling above the stage from nooses.

"I see a sea full of people here at the Palladium tonight, and each and every one of you is different," he said, his voice rising and falling in a Gantry loll as he scanned the crowd with a scowl.

After discussing the message of the video, pointing out that those who are different have been condemned or punished throughout the course of human history, Draiman reached a conclusion that was fitting both within the context of the concert and the context of a post-Sept. 11 world: "Our differences are what makes this country strong ... We stand here together tonight in celebration of life."

The crowd responded to this with another resounding chorus of "U-S-A, U-S-A, U-S-A."

That Draiman offered social commentary of any sort automatically set Disturbed apart from Adema, Stereomud, Drowning Pool and Systematic -- the other bands on the bill -- and their rage-filled, me-too nü-metal mirrors currently on the airwaves. Several other times throughout the night Draiman offered more social commentary, at one point addressing Jerry Falwell, who after the World Trade Center attacks claimed that God was punishing Americans for homosexuality and other sins. While railing against Falwell, Draiman proclaimed, "Live your life the way you want, and I'm not going to buy my salvation from you motherfucker."

A few songs later Draiman stopped the show to chastise moshers who were grabbing at the breasts of women being passed over the top of the pit. Not unlike Ian MacKaye, the lead singer of the band Fugazi and pretty much the standard-bearer for morally upright, responsible punk, Draiman promised to ass-beat and toss anyone he caught groping. This guy is no Fred Durst.

Oops I did it again

The remainder of Disturbed's set was a slick, energy-filled anger rant, complete with a few uncharitable and decidedly intolerant comments from Draiman about his desire to lie down with Britney Spears (well, he didn't put it quite so nicely) and Disturbed's mission to eradicate boy bands, as if bands of that ilk were something entirely different from the homogenized, Calvin Klein-wearing nü-metal forward guard.

The endless churning of bodies on the floor of the venue raised the relative humidity to a rainforest-like level, making moving without sweating impossible. Toward the end of the show, a young man came stumbling out of the pit dazed, a smile on his face as a torrent of blood spilled from a head wound, his worried girlfriend in tow.

It was not a night, all told, completely different from any other nü-metal concert. And corporate rock being what it is, Disturbed's socially conscious musical agenda could certainly be a focus group-generated marketing ploy more than a heartfelt cry for tolerance. But whether Disturbed's compassion is manufactured or not, it's commendable that they're offering a counterpoint to the hateful, epithet-spewing troglodytic crap that has become the pan-genre norm for aggressive popular music.

While Disturbed's music and performance might not represent a paradigm shift within their genre or popular music as a whole, it is a welcome salve to the endless, boring miasmas of self-absorption heard from their peers, and, alternately, the bubble gum and miniature pony quasi-orgasmic ululations wafting out of the sugary boy band and teen virgin/porn queen camps.

At the very least, Disturbed's performance sends a message that in spite of all of the darkness, maybe there is just a little bit of hope for our world. And it begins with tolerance.