As officials tell us to expect more terrorism, the nation's yuppies prepare. 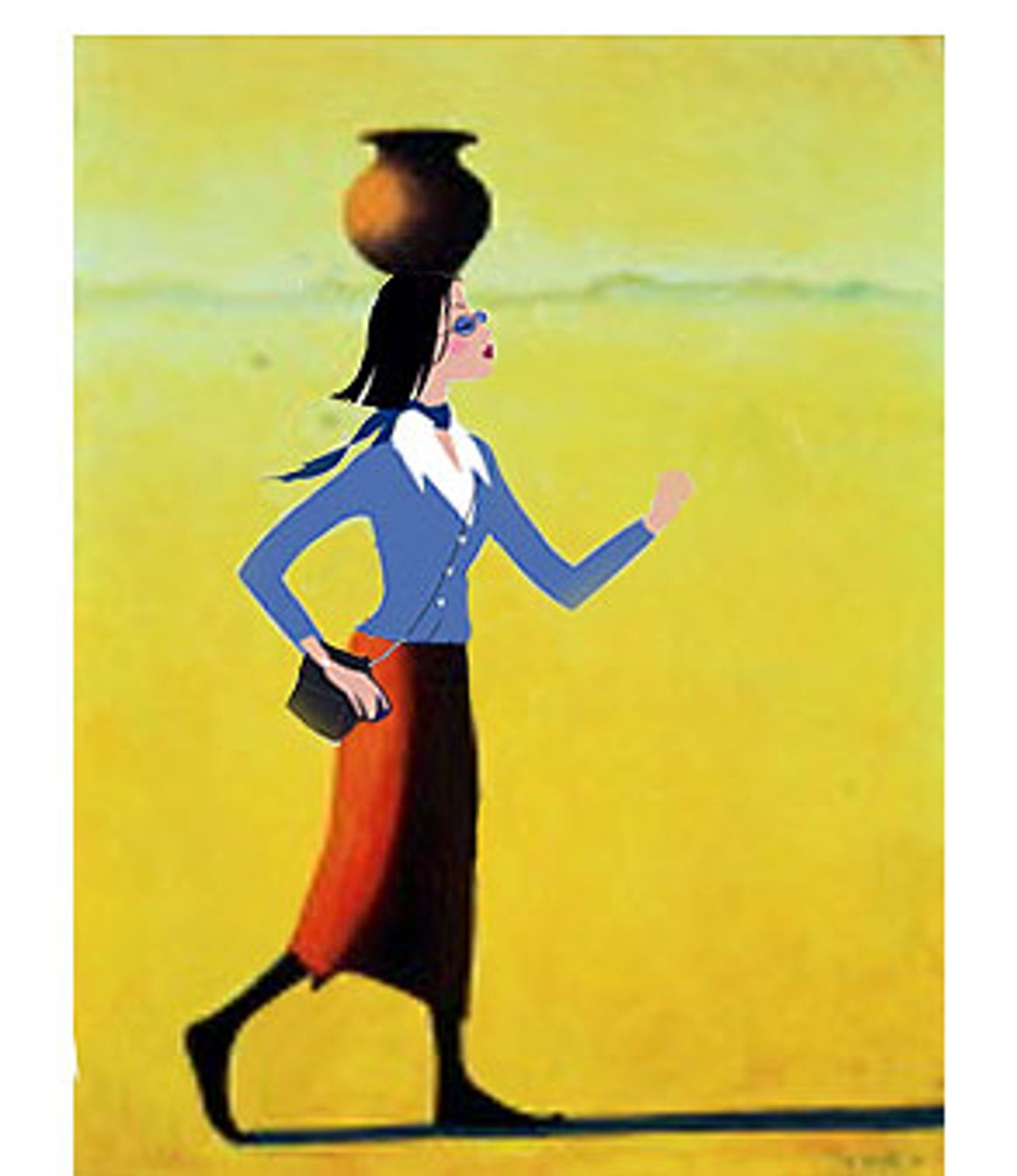 South of San Francisco's Market Street, in a loft building pockmarked with the empty offices of dead dot-com companies, six professionals cluster around a conference table. They're young, stylish, urbane and, now, afraid.

Since Sept. 11, many Americans are spinning scenarios formerly left to airport-lounge novels and pyromaniacal film directors: collapsed bridges, cities in chaos, families overcome in the street by terrible and silent plague. Fears of terrorist reprisals have only grown since Sunday, when the United States and Britain began bombing Afghanistan and health officials uncovered a second case of anthrax in Lantana, Fla. For former masters and mistresses of the American universe, the news over the last month has been profoundly unsettling. Dread has come to Pottery Barn.

"I'm worried," admits Joan, 40, who works in San Francisco's financial district. Like the rest of the group, the legal aide doesn't want to supply her last name. "The government's not telling us everything," she says. "Anyone who thinks they're hearing everything is fooling themselves."

Does that sound paranoid? Those here on a Saturday afternoon appear earnest. They're not Ted Kaczynskis in log cabins; they're the "Friends" cast in an IKEA-furnished loft. No one wields M-16s -- just Nokias. Children of the Information Age, Joan and her friends are here to get to the facts. What do you do when "it" happens? "It" is defined as whatever's recently crawled up your spine to lodge in the cerebral cortex: biological attacks, chemical assaults, hot-wired nukes or car bombs. The list is limited only by the capacity of an individual's imagination. How to regain control?

"We need to know more," says the group's host, an affable, smooth-speaking consultant named Gordon whose demographics would put a gleam in the eye of a Banana Republic marketing VP. He's just turned 30. The leftover birthday cake and the microbrew are still in the fridge with the Red Bull. Around him are the signs of success: lots of computers, cool office furniture and a trilling cellphone.

"We need to understand more about what the threats are to us as citizens," he says, "and what we can do about it."

Despite President Bush and other officials' pitches for a return to normalcy, Gordon, for one, eschews the idea that Americans should "get back to our old routines."

"I thought that was one of the silliest conversations I had heard of," he says. "Things aren't 'routine' anymore."

He has a point. Since the attacks on the World Trade Center and the Pentagon, Americans have received contradictory messages about the threat of more terrorist violence. The president says it's safe to fly, but fighter jets patrol the skies over our 15 largest cities as Attorney General John Ashcroft warns of "a clear and present danger." Tommy Thompson, the secretary of health and human services, tells the nation it can meet a bioterrorist threat even as rumors career through suburbs from Manhasset, N.Y., to Marin County, Calif., about the hoarding of antibiotics such as Ciproflaxacin, which is thought to be helpful in cases of anthrax. Washington Post columnist Sally Quinn convenes a "Gas Mask Club" in a Georgetown restaurant and invites ex-Secret Service agents to explain the finer points of shielding homes from chemical agents.

"I have stocked up on bottled water, flashlights with batteries and canned goods, and I keep the car filled with gas," Quinn wrote in her Oct. 3 column. If someone as well connected as Quinn (she's married to Washington Post editor Ben Bradlee) is getting jumpy, should we start jittering, too?

Joan looks at the other brows at the table. The furrows mirror her own. "If something happens in the city we're screwed," she says.

Joan's fears might have been considered paranoid in August, but this fall they're smack in the middle of the bell curve. The Times of London reported on Oct. 6 that New Yorkers are hiring boats, purloining kayaks and sharing secret code words to spread the alarm if a new bout of terrorist attacks is unleashed. Then, of course, all eyes turned to Florida and the anthrax found there.

Others aren't quite so agitated as Quinn or the San Francisco quorum. Faced with the outbreak of hostilities between the U.S. and the Taliban or al-Qaida, they go fatalistic, not ballistic.

"Nope," says downtown Chicago resident Jocelyn Turpin, 43, when asked what plans she is making. "I am not stockpiling either food or antibiotics, nor do I intend to buy a gas mask. And I am still drinking the tap water and going to crowded places. I will not change my lifestyle or make survival plans unless a continued state of siege occurs. Then it would be prudent, but right now, I refuse to live in fear."

Turpin's got more immediate concerns. The former executive producer of Britannica.com was laid off last spring when the parent company, Encyclopedia Britannica, shuttered her award-winning site. Since her layoff, Turpin's focus has been on finding a gig in the arid landscape of the new new economy.

"I am looking for a job," she says. "That's something I can do something about."

Television researcher David Haynes, and his wife, Fawn, an elementary school teacher, live in Knoxville, Tenn., near Oak Ridge National Laboratories, a government nuclear facility that's sometimes cited as a potential terrorist target. Haynes was asked if he had stockpiled anything out of the ordinary.

"I'm buying Raisinettes and DVDs like 'The Omega Man,'" he says, referring to the 1971 post-apocalypse cult film that pits Charlton Heston against plague-infected zombies.

Humor may be a balm. Or it may be denial. Professionals are learning for the first time in their lives that someone might want them dead. This represents a big paradigm shift for a generation that thought "Fear Factor" kept to the TV and would not stalk the mall food court.

"We have to redefine our entire model of our mental reality," Gordon says. "It's hard to accept. There's a lot of projection and rejection around."

What can be done? Marsha, 32, is in Gordon's loft to learn what options she and her husband have if terrorists strike San Francisco.

"I want knowledge and to be prepared so I'm not panicked -- so I'm thinking logically, and so I can conduct my life as normally as possible," the soft-spoken art designer says.

To that effect, Gordon passes around red folders that his assistant prepared earlier. Inside are neatly photocopied pages, gleaned from assorted Web sites. He holds up the first page, a list of what look to be camping supplies. "These are items you'll need for a 'go pack,'" he explains. A go pack, the group learns, is a pack or duffel bag filled with survival supplies covering aspects of water, food, shelter, fire and transportation. The pack should be prepared and left near the door, ready to be grabbed if its owner has to evacuate. The items on the list can be purchased in prepacked units and include things such as whistles, first aid kits, sunblock and AquaBlox tablets used to purify drinking water.

The other pages in the folder feature tips from sites such as SurvivalSuppliers.com and RedCross.org. Gordon also recommends reading survivalist writer Tom Brown Jr.'s books --"The Tracker," for example -- which teach survival skills. Someone else mentions Michael Osterholm's "Living Terrors: What America Needs to Know to Survive the Coming Bioterrorist Catastrophe," a tome on germ warfare. The suggestions meet with Marsha's approval. "This is ideal," she says, thumbing through her folder.

But it's not enough to pack your luggage. Contingencies, plans and strategies for spiriting away family and friends come next. A lot of these involve retreats to rural properties and farms.

"My mother-in-law has our emergency plan all ironed out," says Rodger Brown, a general manager for an Atlanta communications company and a 42-year-old father of two. "It's this: 'Everybody meet at Kaye's.'"

Kaye, Brown explains, is his aunt. "She lives in the North Georgia mountains on about 1,000 acres of family land, with its own water supply, fertile bottom land and three chicken houses with 20,000 birds in each one. So, no matter where you are when the bombs go off, head to Kaye's."

Husband and wife Chet Flippo and Martha Hume, both 50-something writers in Nashville, Tenn., say Martha's sister's farm in Eastern Kentucky will be their 69-acre redoubt in case any dire scenarios unfold. Meanwhile they're laying in some emergency supplies at home.

"Chet and I are stocking up," Hume says. "So far, we have a dozen each of C, D, AAA and AA batteries, 50 pounds of dog food, 24 rolls of paper towels and toilet paper and eight cans of Beanie Weenies."

But where do you go if you're a solo city dweller with no immediate family to run to, nor rural compounds in which to deposit your Beanie Weenies and batteries? The dilemma posed by such questions -- "Hey, I'm alone here!" -- isn't lost in the loft. In fact, it's another reason to come together. If you're single or new in town, acting as part of a group is better than reacting alone.

"I've been talking with my own family, but they're in Ohio. It felt very good to be with a group of like-minded people," says Joan. "They seemed very rational, very think-things-through."

The best part of a civil defense may just be the civil part -- citizens banding together in order to protect themselves and come up with a plan. Gordon thinks so. The consultant and his group are planning a second meeting, what he calls "a strategic planning session" to cover contingencies.

Are such preparations necessary? The most prevalent reaction still remains the urge not to change one's routine or succumb to fear. Says Turpin, "If we do, they win. And I hate losing."

But even she admits she's leaving a backpack by the door "just in case."