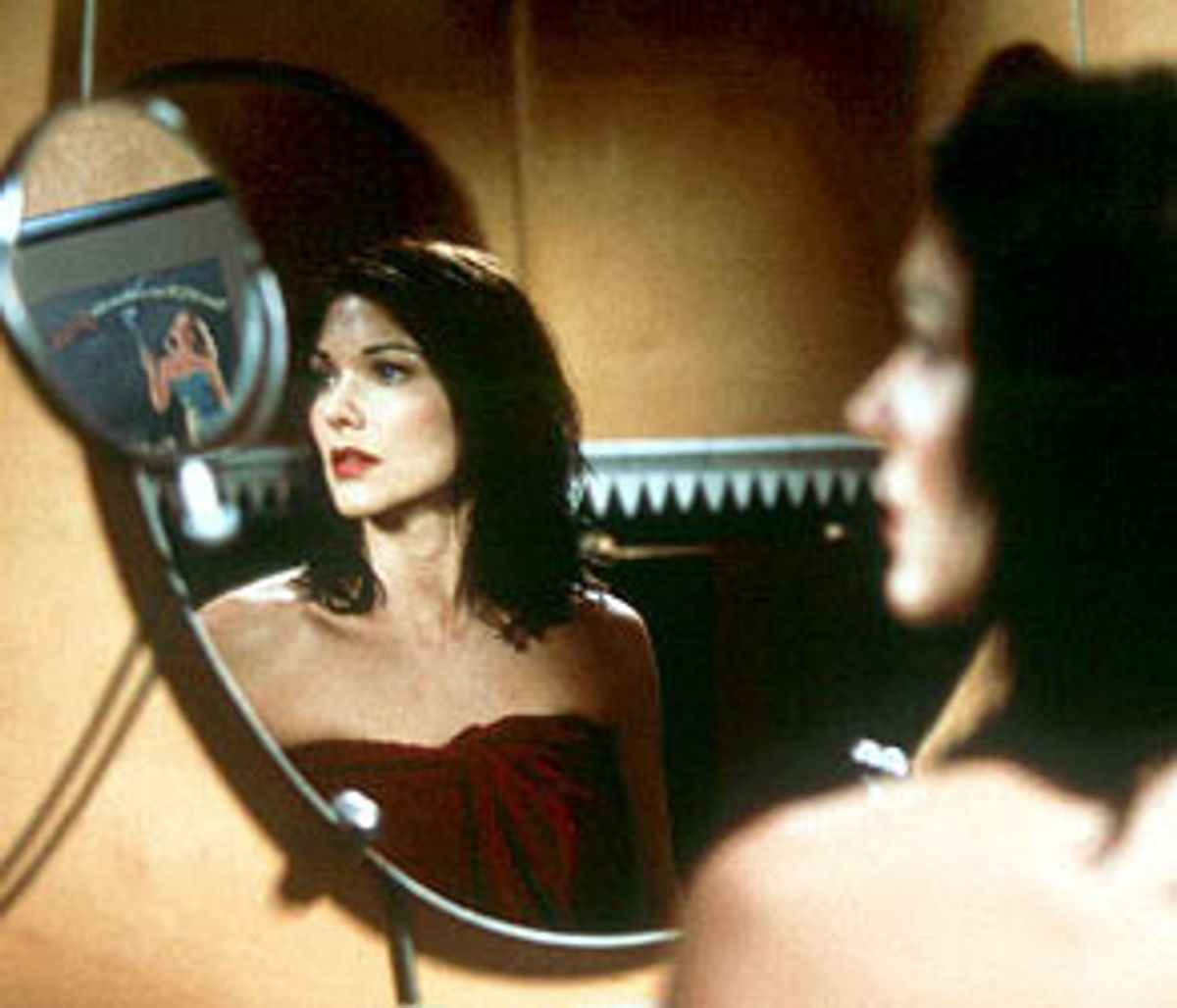 "Mulholland Drive" is the most womanly of David Lynch's movies. To call it feminine wouldn't be the same thing: That implies a shy delicacy, almost an air of propriety, that "Mulholland Drive" just doesn't have. Instead it's wily and sophisticated, stylized like an art deco nude, and suffused with so much feline glamour and beauty and naked eroticism that its chief aim seems not to be to dazzle us with its typically Lynchian plot twists, but to seduce us into its sway and keep us there. This is a movie with hips.

"Mulholland Drive" is beautifully and intricately structured: Those who delight in disassembling Lynch's puzzles will have a great time flipping the plot around, tracing its breadcrumb clues back from the end to the beginning. But it also works out perfectly if you're interested only in the interplay between its hypnotically beguiling characters (or even if you're interested only in seeing them go to bed with one another). At the very least, the luxe air of menace that hangs around "Mulholland Drive" like a vapor is evidence of Lynch at his best. If you could put the essence of 3 a.m. in a perfume bottle, it would smell like "Mulholland Drive" looks.

With its liquid pacing -- ever seen drops of mercury spilt from a broken thermometer in slow, shiny, heavy droplets? -- and codeine-glorious imagery, "Mulholland Drive" has magic powers that put your head into a very weird place. The intoxication begins and ends with the two lead characters, a noir-fantasy Betty and Veronica who meet by chance and team up to solve a mystery. Blond, bright-eyed Betty (Naomi Watts) has just arrived in Hollywood from a small town, ready for stardom in her slim, practical but spangle-trimmed cardigan sweater. Her aunt has granted her the use of her comfortable, tastefully retro-appointed apartment, in an old-Hollywood style complex overseen by spunky senior-citizen starlet Coco (Ann Miller, the '40s musicals star), who has an aura of old Hollywood about her. She favors Chinese brocade ensembles and wears her jet-black hair drawn back snugly, the better to show off her jazzy spit curls.

Betty unlocks the door to the borrowed flat, eager to familiarize herself with all its secrets and delights; in the bathroom, she finds a beautiful naked girl (Laura Elena Harring) in the shower. At first the woman, a raven-haired stunner (she's got Snow White's coloring and Jayne Mansfield's body), can't remember her own name. In a panic, she catches sight of a framed poster for "Gilda" and announces spontaneously that her name is Rita.

Betty and Rita are uneasy friends at first, but it's not long before their differences -- Betty the small-town innocent; Rita the slow-burning temptress -- begin to interlace and reinforce one another. Together, they must find out who Rita really is: The clues they start out with are a blue key and a handbag stuffed with cash; their search leads them to a dingy apartment court and a nightclub suffused with neon-blue light. The people who penetrate their orbit, either significantly or tangentially, include a cocky hipster film director (Justin Theroux); the spokesperson for a shadowy mobster who's out to control Hollywood (Dan Hedaya); and a malevolent cowboy who looks as if he were lifted straight out of a '30s radio serial (Monty Montgomery) -- his belted sepia-tone jacket, trimly tied kerchief and mountainous white hat speak out so loud and clear you can almost hear them.

There's also a midget in a wheelchair (Michael Anderson -- it wouldn't be a Lynch movie without him), a singing sensation in frosted lipstick and a bouffant skirt who's poised to be a major movie star, and a creepy, shamanistic homeless man who rules a discarded-shopping-cart kingdom in the back of a cheerfully run-down Sunset Strip coffee shop. That's Lynch for you. Some characters are woven firmly into the plot and others dangle, but even the red herrings contribute something, adding patches of shading to the picture's overall mood.

But everything and everyone in "Mulholland Drive" circles back to Betty and Rita, the bright twin centers of the movie's universe. Rita's amnesia has been induced by a car accident. We see her stumbling away on stem-like legs -- gangly and uncertain, she's a disoriented deer in a black cocktail dress. There is nothing in Rita's face or comportment to suggest from the very start that she doesn't mean trouble: Her dark eyes have a wary, catlike slant to them; she sometimes speaks as if she were a spy from another world, ever aware of the encrypted script she's supposed to be following. But Harring -- in real life a former Miss USA who also, as it turns out, used to be married to a count -- doesn't play Rita as a blank, bland beauty: We're able to catch glimpses of the secrets shimmering behind those eyes like black koi in a dark pool.

Watts' Betty, the bubbly blond, is the more complex character of the two, and ultimately, the most affecting. Hollywood is her Wonderland: She rehearses her lines at home with Rita in a hokey set piece; dressed in happily coordinated bathrobes, the two of them volley stiff splats of dialogue back and forth, after which Rita reassures Betty, "You're really good!"

Betty then heads out to her first audition. There, she tries the lines out against her potential costar (Chad Everett, in a marvelous little cameo), only now they sound entirely different: Betty's bravura audition performance is like the resonant ping of a tuning fork, vibrating with sensuality. This is Lynch's shorthand way of clueing us that Betty is the quintessential Hollywood ingenue, the very good girl who is of course also begging to be corrupted. But as he shows us later, there's much more to it than that. Watts' performance starts out at a lacquered-bright pitch and gradually softens, sharpens and deepens, to devastating effect.

By the movie's end, the women's roles have been turned around and refracted so that they become barely recognizable versions of their earlier selves. But again, that's Lynch for you, only here it's Lynch improvising on both a juicy plot and a sustained mood -- one reinforces the other until the two are inseparable. It's a minor spoiler to tell you (stop reading now if you're sensitive to such things) that Rita ends up seducing Betty, but it's impossible to talk about the movie in any significant way without mentioning the scene: Its oneiric, charged eroticism is so potent it blankets the whole movie, coloring every scene that came before and every one that follows. The actresses, semi-nude but emotionally completely exposed, play the scene in a way that's both natural and thrillingly theatrical. Its beauty is only intensified by its heat.

People can have great sex anywhere. But for the space of that scene, Hollywood -- Lynch's Hollywood -- is the sexiest place in the world, a place where tawdry free-floating secrets take possession of lovers' bodies at random, turning them into exquisite, hungry voluptuaries. Hollywood herself, next to Betty and Rita, is the third star of "Mulholland Drive," and she's not exactly a benevolent presence. Lynch doesn't mince metaphors in proving Hollywood as a place that has not only the means but the voracious desire to corrode hearts and souls.

But for all its malevolence, could Lynch's Hollywood be any more seductive? Or any lovelier, with its deco-era stucco mansionettes, its eerily muted sunshine (daylight as viewed through a champagne hangover, perhaps?), its faded-brocade starlets? (Cinematographer Peter Deming, who also shot "Lost Highway," outdoes himself here.) "Mulholland Drive" was originally conceived as a TV project. After it was rejected, the French production company Canal Plus backed Lynch with funds (and with confidence) to flesh it out into a movie. That's only right: The lure of Hollywood, as it seeps through Lynch's vision here, is too big for tiny living-room screens. It needs to be played out on the big one, a space large enough to allow Lynch to sort out the Hollywood backlot jumble sale in his brain.

Lynch does sort it out, skillfully and in a way that only heightens our sense of wonder: "Mulholland Drive" is a gorgeously rounded picture, one that starts out with a glamorous come-hither wink and has the good grace to follow through, although perhaps not in the way we expect. Lynch's Hollywood is a grand old girl, but she's one with some very treacherous curves. To trace the contours of her sensuality, you need a camera as sensitive as a set of fingertips. Lynch's is.