The Bush team doesn't want you to see his video. Instead of censoring him, why isn't the administration trying to combat his appeal around the world? 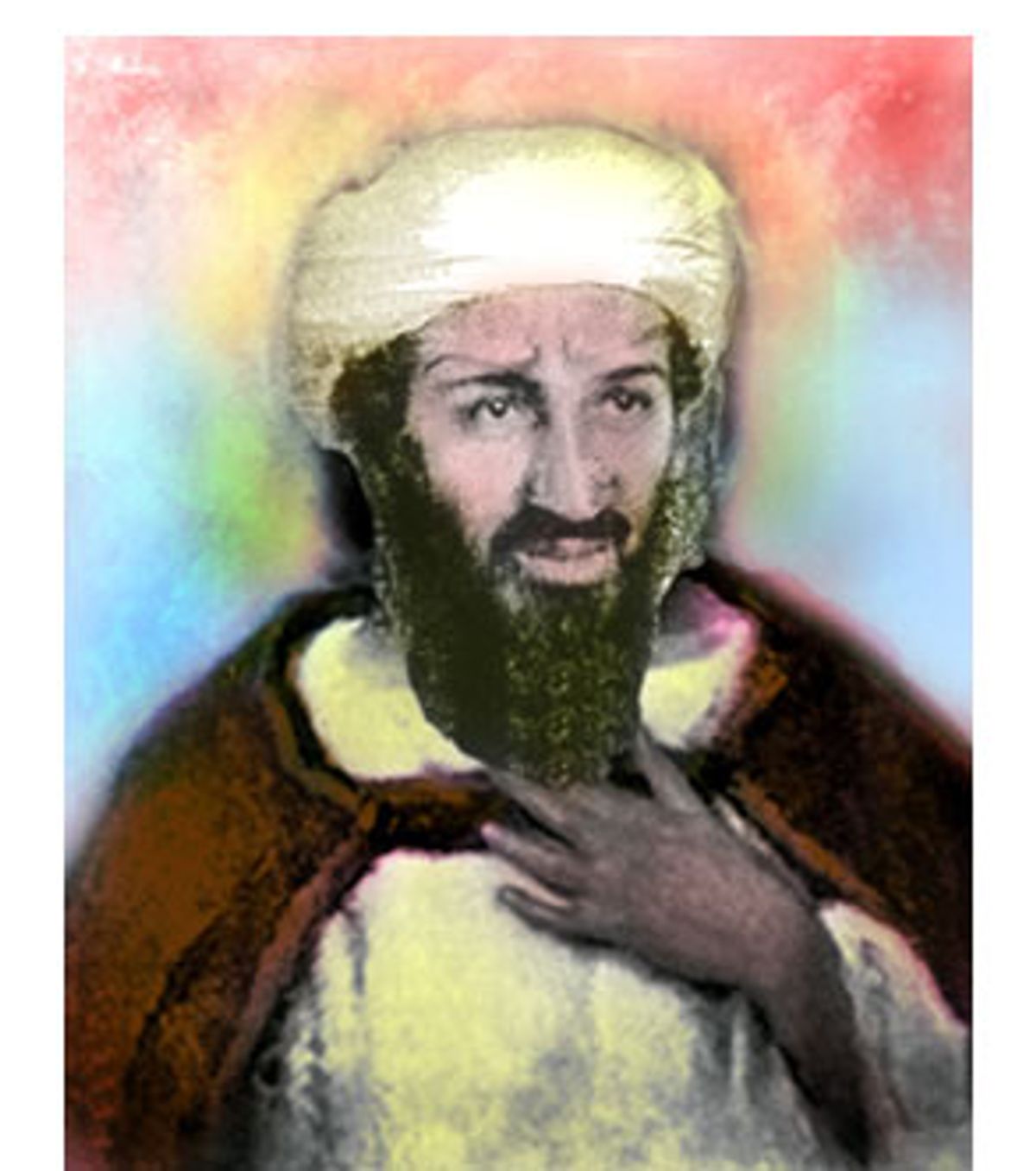 "He looks like Jesus," my friend said about Osama bin Laden the week after the Sept. 11 massacre, and the Catholic girl in me recoiled in horror. "He does," she said patiently -- "the Middle Eastern version, not the blue-eyed one you grew up with."

And I realized she was right -- the reviled Saudi terrorist does sort of look like the vaguely Semitic, post-Folk Mass "after all, Jesus was from somewhere in the Middle East so he was probably a little bit swarthy" Jesus we began seeing, at least in liberal Christian churches, in the 1970s.

It was at that point I realized I'd never really looked at Osama bin Laden, didn't know who or what he looked like, never met his eyes in the various mug shots, never sized him up for charisma or charm. Even on Sunday, when he appeared Phil Donahue-like in a prerecorded video, cordless mike in hand, and with his two closest colleagues laid out the case for jihad against the U.S., I paid attention to the translation of the menacing Arabic words and hardly watched the screen. To the extent I did, I thought the tableau silly: three middle aged men in turbans and combat fatigues, hosting a talk show in a cave, live from Afghanistan! Fidel Castro crossed with Jesus Christ, with a little bit of Oprah thrown in. What a weirdo.

That impulse to ridicule, to diminish an enemy, is self-protection, but also self-delusion. "Osama: The Movie" went over big in the Muslim world. The next day, Palestinian Authority police fired on their own people for the first time, killing three, to try to halt the politically unacceptable spectacle of pro-bin Laden riots in Gaza, at a time when the Bush administration is making noises about a Palestinian state. Mothers in Muslim countries were already naming babies Osama before Sept. 11; now it's supposedly second only to Mohammed in popularity in the Islamic world.

"Messrs. Bush and Blair may tell the world they are going to win the 'war against terrorism' but in the Middle East, where Osama bin Laden is acquiring almost mythic status among Arabs, they have already lost," the British Independent's Robert Fisk wrote Wednesday. "Mr. bin Laden's voice, repeatedly beamed into millions of homes, articulates the demands and grievances -- and fury -- of Middle East Muslims."

But as many Muslims thrill to the sight and sound of bin Laden, Americans are having their access to him limited. In an unprecedented and stunning move, five American network executives agreed, at the behest of national security advisor Condoleezza Rice, to limit the rebroadcast of the Sunday video. The Bush administration has mostly abandoned the pretext it gave on Wednesday for censoring bin Laden: that his message contained secret codes to his followers to begin or delay new terrorist actions. (Will Ari Fleischer never tire of being pushed out on the front lines to mislead reporters?) Instead, Rice urged the TV execs not to let bin Laden use their networks to agitate against Americans.

"Her biggest point," said NBC News president Neal Shapiro, "was that here was a charismatic speaker who could arouse anti-American sentiment getting 20 minutes of air time to spew hatred and urge his followers to kill Americans." Incredibly, Shapiro and his patriotic peers were convinced -- as though the American TV viewers would somehow be in danger of following bin Laden's orders to slaughter one another. Meanwhile, overseas audiences, including the entire Arab world, are going to see and hear him no matter what Rice says.

On one level I had to enjoy the spectacle of our female national security advisor telling TV's alpha males what to do, a picture-perfect inversion of gender relationships under the Taliban. Only in America! But the networks' cave-in is cowardly and scary, too. It's the U.S. failure to really look at bin Laden, see him and hear him, take in his appeal, that makes me worry about whether we're equipped to win this war.

Forbidden by Condi Rice, I had to take another look at what I could find of Sunday's video, this time to try to understand bin Laden's appeal, rather than ridicule him. America's worst nightmare is charismatic and gentle in affect, not Hitler nor Ayatollah Khomeini either. Rather than hector or scold, he mostly soothes and seduces, although he works himself up to a sterner, more forbidding pitch in the end. Long, elegant fingers grasped the microphone. I had to admit, he's even striking in a non-Western way: long-faced, strong-featured, with soulful, deep-set eyes, high cheekbones. Of course Americans are not supposed to see any male appeal: One favorite story -- broken by the tabloid the Globe, chuckled about by journalists, repeated Wednesday by the New York Times' Maureen Dowd, mistress of the most humiliating putdown possible -- is that he is under-endowed, anatomically speaking, and his hatred of the U.S. arises from being ridiculed for his inadequacy by an American woman. We love this story! If only it were true.

It's his eyes, more than anything else, that call up Jesus, I think -- the sad, sick, soulful eyes. But it's the Jesus of the cross, of the crown of thorns, of the long walk toward Calvary; the martyred, dying Jesus. Bin Laden is a wounded leader, with a mysterious range of health problems -- we know about his enlarged heart, we know he often uses a cane. The leader who seems strangely like a loner: Though one of 54 children, he was in some ways an only child, since he was the only issue of his father's marriage to his mother, an exotic Syrian, in a family where the children of each wife banded together as mini-tribes for protection. Now his siblings enjoy their wealth in Western style while he makes war upon them, in the name of Mohammed, peace be upon him.

Yes, he talked of peace on Sunday, while waging war, in his soothing, gentle voice. And his message, too, had perfect pitch. "What America is tasting now is only a copy of what we have tasted. Our Islamic nation has been tasting the same for more than 80 years, of humiliation and disgrace, its sons killed and their blood spilled, its sanctities desecrated." Eighty years -- this didn't start with the Gulf War or even the founding of Israel, he made clear. He wants to return to the days before the end of the Muslim Caliphate in 1924, which had ruled the Islamic empire, once stretching Spain to Syria to Turkey, for centuries; back before Britain's Balfour declaration, which committed the West to a homeland for Jews in Palestine and advanced the cause of Zionism.

And of course he embraced the Palestinians' cause, never before his top grievance against the U.S., with new fervor. "I swear to God that America will not live in peace before peace reigns in Palestine," he said, "and before all the army of infidels depart the land of Muhammad, peace be upon him."

Of course we want to look away from the sad-eyed killer, the soft-voiced assassin; we do not want to have to understand him. It has long been lamented that the Palestinians have not produced a Gandhi, that there's no Martin Luther King Jr. of the Muslim world. But a cruel interplay of colonialism, poverty, Western indifference and Muslim culture -- mixed with his singular family history and his own cruel choices -- has given us bin Laden, instead. He's what we have to deal with, and we look away at our peril.

Instead of censoring bin Laden, Bush should refute him (as Slate's William Saletan argues here). Instead of caving to Condi Rice, the networks should have redoubled their efforts to help Americans understand this worldwide enemy, and his malevolent but complex appeal. Robert Fisk is right: America has lost the first round of what he calls "the talking war." Let's hope our intellectual cowardice doesn't hurt us on the battlefield as well.