EXTRA! Anthrax in the newsroom 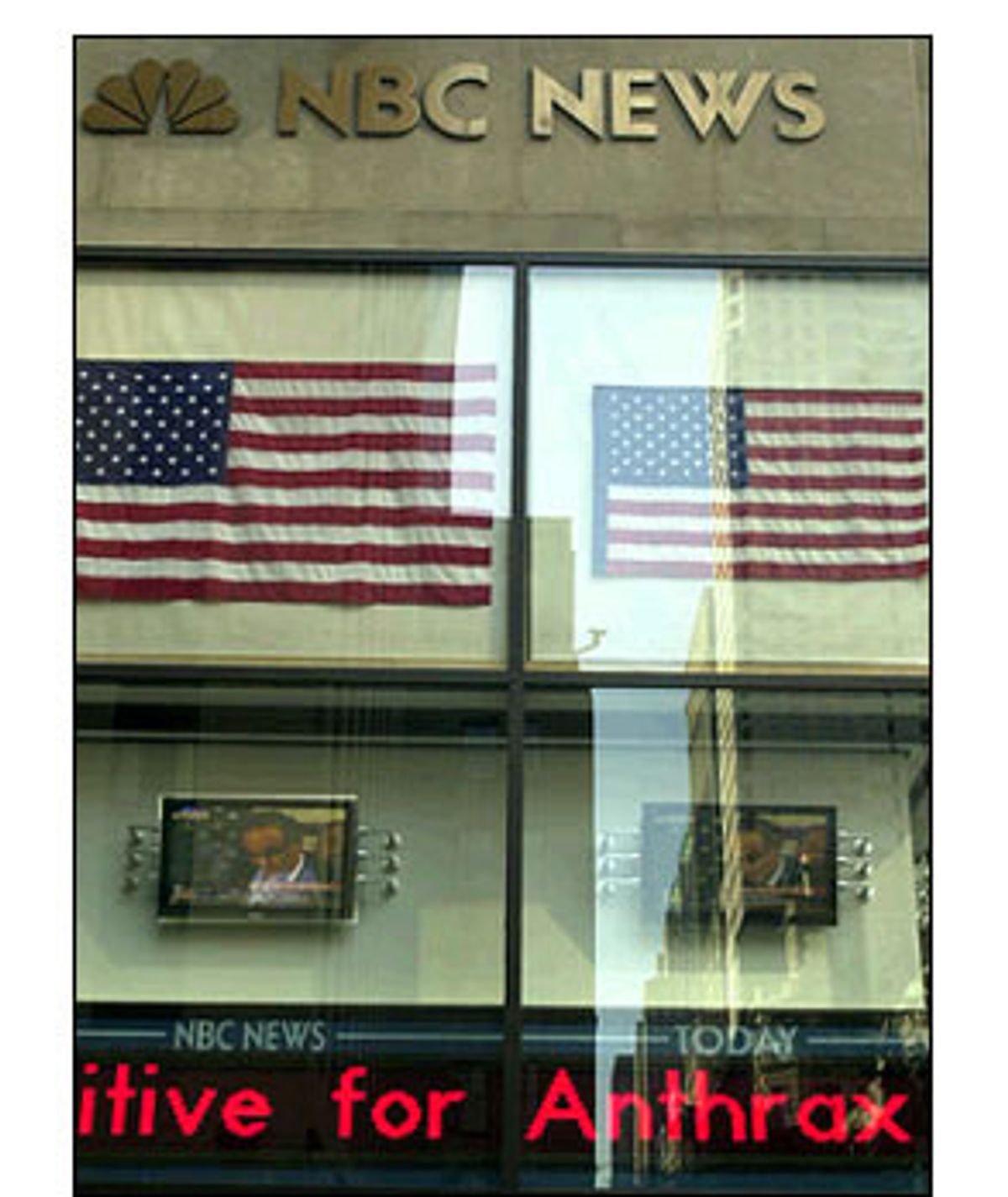 Less than 18 hours after reporting on President George Bush's request Thursday night that Americans return to normal and not let terrorist threats disrupt daily life, two of the country's largest news organizations, NBC and the New York Times, discovered that they may have been targets of anthrax attacks.

Friday morning NBC confirmed that one of its employees, said to be Tom Brokaw's assistant, had tested positive for cutaneous, or skin anthrax, after handling an envelope filled with a "powdery substance" weeks earlier. The skin form of anthrax is much less dangerous than the inhalation variety responsible for one death in Florida last week.

The NBC incident brings to four the number of confirmed cases of the rare disease in just the last week.

Investigators insist there's no link between the anthrax outbreak and the Sept. 11 terrorist attack on America. "We see no connection to 9/11," said Barry Mawn, the head of the FBI's New York office, at a press conference at NBC's headquarters at Rockefeller Center.

Meanwhile, just a few blocks away from NBC in midtown Manhattan, and at virtually the same time NBC staffers were reading an internal memo from company chairman Bob Wright detailing the anthrax case, employees at the New York Times were temporarily stunned to hear a message over the loudspeakers announcing that a reporter had found a suspicious package, that the mayor's office had been contacted and that the police were now investigating.

It turns out that around 10:30 in the morning, New York Times Middle East expert (and co-author of the current bestseller about biological warfare, "Germs") Judith Miller received a similarly suspicious envelope containing a white powdery substance. Tests on the substance were expected to be completed by 8 p.m.

That now makes three national media outlets that may have been targeted for anthrax contaminations. The first was American Media Inc., which publishes several supermarket tabloids. (The Columbus Dispatch newspaper in Ohio quarantined three employees Friday after they came in contact with a powdery substance contained inside a Halloween card; test results on the substance were still pending at press time.)

Clearly unnerved by the media focus to date, the Associated Press, located across the street from NBC, temporarily closed mailroom operations on Friday. CBS also said it has shut down its New York mailroom as a precaution and is not accepting any new mail. ABC said it halted all internal mail delivery in New York and Washington pending a security evaluation.

Three American Media employees have tested positive for anthrax, including now deceased photo editor Bob Stevens. Stevens was the first case of inhalation anthrax reported in the United States since 1979. Hundreds of American Media Inc. employees have since been tested. The results are not yet completely in, raising the possibility that additional anthrax cases in Florida could still be confirmed.

Although news of each case reached employees of NBC and the New York Times at almost the same time on Friday, it appears highly unlikely the events were timed to coincide.

That's because, after complaining of symptoms, the NBC employee was first tested for anthrax on Oct. 2. The results were negative. Still showing no signs of improvement, her doctor then took a biopsy on Oct. 9. It came back positive on Friday.

It's unlikely someone would have been able to know those test results would come back the same day a suspicious envelope arrived at the New York Times.

Health and law enforcement officials stressed that initially they saw no connection between Florida's anthrax outbreak and the NBC case in New York.

However, NBC confirmed its sick employee received the suspicious envelope on Sept. 25. And while Florida's Stevens was not diagnosed for anthrax until Oct. 2 (he died Oct. 5), authorities suspect he first came in close contact with a contaminated piece of anthrax mail right around Sept. 25. His last day at American Media was Sept. 26.

News of the attacks sent ripples of concern through the general public, but elicited differing reactions from the two media giants involved.

NBC staffers, who for the most part took the news in stride, were told upfront that their colleague's case of anthrax was not severe or contagious, that she was responding well to treatment and that there was no reason to believe any other employees had been infected. As a precautionary measure, though, NBC's third floor, home to "NBC Nightly News," was sealed off while investigators test it for environmental safety.

According to a network spokeswoman, NBC employees were relocated to other floors. News broadcasts would be unaffected by the ongoing health inspection, she said.

In comparison, uncertainty reigned at the New York Times for much of midday. Beginning at approximately 11:00 a.m. and lasting roughly two hours, staffers on the third and fourth floors, which make up the heart of the paper's newsroom and are connected by an open staircase, were asked not to leave. The concern appeared not to be contamination, but a desire to have an accurate record of who was on each floor at the time, should the test results on the substance later come back positive.

Those results were not expected until after 8 p.m. on Friday night. All employees, regardless of what floor they worked on, were asked to leave phone numbers where they could be reached over the weekend.

During the confusion, the paper's executive editor, Howell Raines, gathered up the news staff for two informational sessions. By approximately 1:30 in the afternoon, health officials gave employees the OK to move about the building, and visitors were again allowed inside the building.

Editors and reporters then returned to the job of putting out a newspaper, still wondering about the implications of the scare. "It's unnerving," reported one Times writer. "Everybody's a little stressed out."

The Associated Press contributed to this report.