The bid bombers of eBay

How a group of e-vigilantes, furious at profiteers attempting to cash in on the WTC tragedy, fought back. 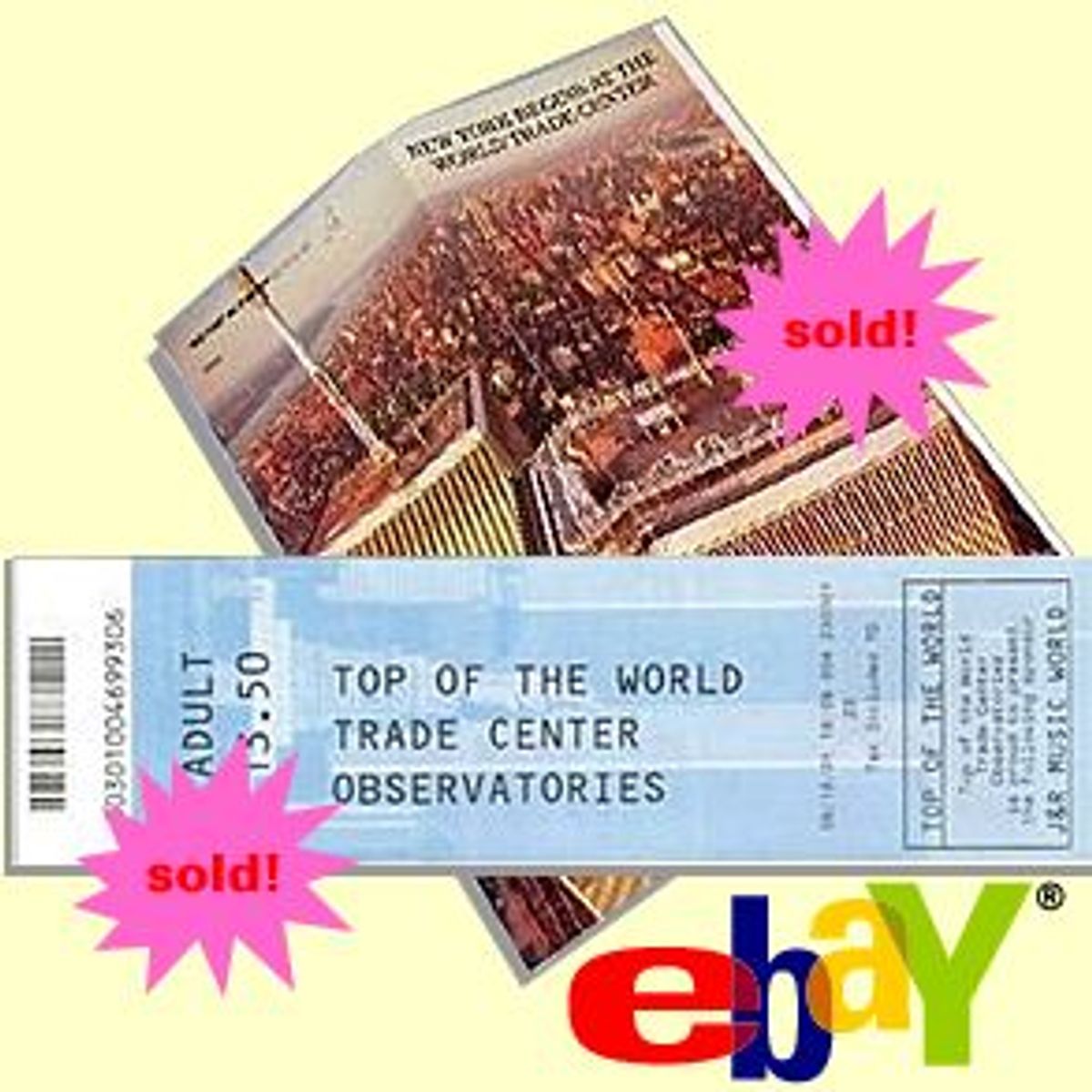 As soon as the World Trade Center came down on Sept. 11, souvenirs featuring the Twin Towers went up for auction on eBay. The mementos were the sort of touristy kitsch that Times Square vendors usually can't give away. But in the wake of the attacks, postcards that you can still buy 10 for a dollar on the street were suddenly selling for $30 apiece on the auction site, while cheap snow globes with plastic skylines were going for as much as $600. A special edition of the New York Post printed a day after the attack (cost to the initial buyer: a quarter) was listed for a hefty $15,000.

With seedy characters no doubt salivating over the millions in cash, bonds, precious metals and merchandise still buried beneath the ruins of the World Trade Center, the online profiteering rush in the days after the disaster may have been one of the least odious ways to exploit the tragedy. But it was still enough to spur one group of people into action.

"It made me sick to see people, parasites really, sell World Trade Center memorabilia. They were obviously trying to make money on this horrible tragedy," said a woman from Florida trading under the name Paige7777. She and a loose-knit band of eBay users decided to put an end to the trading by "bid bombing" -- making fake bids on items they wanted to get off the site. Bidding under names like "wtc_robin_hood" and "urasickoo," they snapped up every World Trade Center souvenir, hundreds of thousands of dollars worth, as fast as sellers could list them. The catch? They had no intention of coughing up the cash for any of it.

In the world of online auctions every tragedy or human misdeed means a chance to go rooting around in the attic for a quick way to make a few extra bucks, and this wasn't the first time eBay has gotten into trouble for listing controversial items. Nazi memorabilia, Timothy McVeigh T-shirts, pieces of the bullet-riddled door where Amadou Diallo was killed and even human organs (though these proved to be a hoax) have all appeared in auctions and caused consternation. But the reaction of the bid bombers to the WTC speculation is especially interesting for at least two reasons. It demonstrates how bidders can manipulate the system in an attempt to police it themselves, and it shines a hard light on some of eBay's internal contradictions -- it may not always be in eBay's best financial interest to crack down thoroughly on distasteful auctioning.

The rebellious rumblings began on eBay's own community bulletin boards. Users expressed their disgust with those who were selling Sept. 11 souvenirs and with eBay's permissive attitude in letting the auctions stand. "I cannot believe that eBay is allowing ANY WTC memorabilia to be sold right now. I don't care what they are selling, in deference to the victims ALL of the auctions should be pulled. Have you seen the number that started today? Those sellers are vultures, nothing less," wrote one trader, posting under the name Incognito45.

EBay did officially ban the sale of World Trade Center memorabilia almost 12 hours after the skyscrapers collapsed, but it wasn't fast enough to satisfy some traders. "It took users a day of begging, yelling, and cajoling to convince eBay to take those listings down," said Rosalinda Baldwin, head of the Auction Guild, an online auction watchdog group. "Everybody felt like they had to do something ..."

Since eBay's policy is to list auctions first and ask questions later, employees are left to police the site after the fact for items that violate company rules. The deluge of new auctions posted on or immediately after Sept. 11 ensured that some would slip through; eBay simply couldn't take them down fast enough.

But through a feature called "Buy It Now" -- where a bidder can purchase an item immediately instead of waiting the customary seven to 14 days for an auction to end -- sellers and bidders can easily slip past eBay's watchdogs. With the "Buy It Now" feature a seller can list a book of matches from Windows on the World for a set price, say $500. Then anyone who thinks there's a run on World Trade Center souvenirs can buy it immediately before eBay even has a chance to notice.

When asked about the false bidding and all the controversy surrounding it, eBay spokesman Kevin Pursglove said he was aware of the situation and gave the company line: Buyers caught making fake bids would be suspended.

But eBay critics say the auction site has powerful reasons not to notice tragedy profiteering. The seller gets the cash and eBay gets a cut in commission fees (and with eBay generating $431.4 million dollars in revenue off of $1.6 billion dollars in gross merchandise sales last year, we're not talking chump change here).

The suspicion that it might literally pay for eBay to drag its heels and "accidentally" miss an auction here and there encouraged some disgruntled traders to engage in e-vigilantism. "Time to create bogus ids and trash those profiteers!" Ironranger6 posted to the eBay Town Square community forum. Supporting each other through a network of public posts and private e-mail, many eBay users did just that.

Auction Guild's Baldwin notes that nothing has ever enraged users as much as the World Trade Center items. Yet even though she understood why people were upset, she didn't think interfering with auctions was the right thing to do. "I know they did it out of righteous anger, but I don't approve ... EBay should deal with it, not the users," she said.

Not surprisingly, many sellers agreed. "Free enterprise, free trade, access to markets, the pursuit of profit are the American way," ranted one man in a post to alt.marketing.online.ebay. "These terrorist acts you are committing against Free Trade and Commerce on eBay are putting you in the same boat as the WTC and Pentagon bombers."

Some sellers have even made veiled threats against users intent on ending World Trade Center auctions. Ian Carmichael, a longtime eBay trader who dared to make fake bids under his real name, received a message in his e-mail inbox that read in part, "It was defiantly [sic] you who was 'selfish' to risk retaliation on yourself, wife, and three children ... Your personal information is easily accessible through search engines ... I would stop your actions at once."

Conversations about patriotism and what it means to be an American have popped up in every corner of the Web, and the vicious attacks and counterattacks seen in the eBay bidding fiasco are proof that these debates have seeped into even the most mundane online communities. Even for those who might look down their noses at WTC profiteering, there are still reasons to oppose e-vigilantism.

"World Trade Center rubble is offensive," says David Steiner, an eBay user who runs an online auction newsletter called AuctionBytes. "But pictures from the 1970s are important for people to collect."

In a strange twist, eBay seems to think so too, given that the auction site lifted the ban on selling World Trade Center and Pentagon-related souvenirs as quickly as it implemented it. You can now sell Sept. 11 memorabilia on the site, but only if items are listed under eBay's "Auction for America" program -- a fundraising effort lasting until the end of the year in which all of the proceeds will go to victims of the terrorist attacks. Which raises one last question: Is it wrong to pay outrageous prices for World Trade Center souvenirs when the money goes to the families of people who died there?