The night of Sept. 11, my daughter approached me with a hairbrush attached to her head. 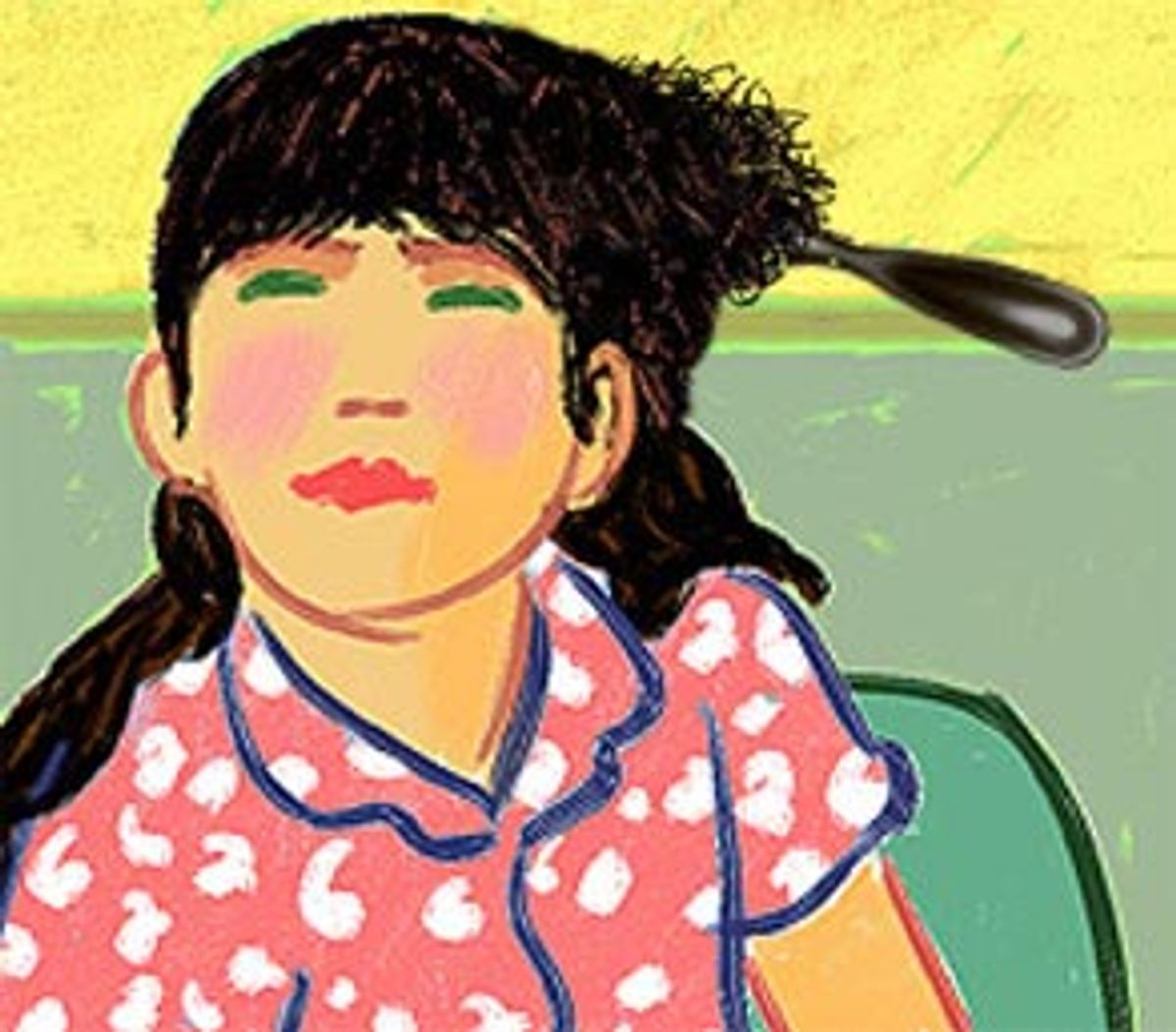 On the evening of Sept. 11, my 13-year-old daughter, Ariel, sought us out in our bedroom with a hairbrush attached to the side of her head. It was on her left side, up near the temple, and it held firmly, a horizontal jut of black plastic like the line of a fraction separating the top of her head from the vertical flow of hair falling to her shoulders below.

"I can't get it out," she said to my husband, Paul, and me. We were sitting sideways on the edge of our bed facing a bureau just a few feet away where our television replayed the day's disaster in rectangular inserts beside the grim faces of news anchors. I shifted reluctantly toward Ariel.

"I just kept turning and turning it," she said, as I beckoned her into the light.

It was a brush she'd dug up from a basket in the bathroom, no more than eight inches long, solid black with a handle that tapered off to a rounded point. Its head was one of those with plastic bristles 360 degrees around, and it was this that Ariel had rolled into her hair to the point where its surface was now barely visible under the tangled dark brown mass.

I moved around to face her, tugging her closer between my knees. Our heads were at equal heights, and I arranged hers to better evaluate the situation. A three-inch square of hair was being gripped by the brush, pulled toward it from all sides like a magnet, securing it so that when I tried to jostle it free, it barely moved. On the television the planes pierced the towers once more, and the three of us watched in silence as the buildings collapsed yet again.

My plan was to remove the hair little by little until the brush was finally free, but my first attempts to untwist even a few strands proved futile, given the number of times they were wrapped around the brush. An application of conditioner did little to improve things. My arms were working meticulously at ear level and before long, they started tiring. We instructed Ariel to lie beside us on the bed, brush side up, and I turned to Paul.

We call on Paul when the fine gold chain of a necklace is discovered with a knot, when the strings of a beloved marionette are tangled, when the silver loops of a Slinky begin to overlap. So on the evening of Sept. 11, Paul redirected his attention from the television we'd been watching all day to the puzzle of his daughter's hair. She lay on her stomach, head facing the screen, eyes full of worry, face distorting with each new tug.

The operation that followed took nearly two hours. Paul carefully moved small clumps of hair away from individual brush bristles while I snipped off as much of the plastic as I could. Our theory was that if we could obliterate the bristles, the cylinder that held them would simply slide away. Paul parted, I cut, one by one, half-inch by half-inch, while the brush seemed to loosen only minutely. But a three-inch patch of chopped-off hair was out of the question, so we added another infusion of conditioner and continued our project.

At 10 o'clock, we decided we'd removed enough hair from the brush that cutting the rest became a feasible, concealable conclusion, and with a few simple yet somehow anticlimactic snips, we released Ariel to survey the damage and hope for the best.

Today, on an early October afternoon that has bloomed with the leftover warmth of summertime, I see sprouts of short curls on the side of Ariel's head where the brush had been lodged. They mostly blend in with the rest of her hair, which waves in shining ringlets toward the middle of her back. She is chatting happily on the telephone. The television has resumed its normal programming, still snowy, however, on those channels that had broadcast from the Twin Towers.