No one paid much attention when abortion providers received letters supposedly tainted with anthrax in 1998 and 1999. Everyone's paying attention now. 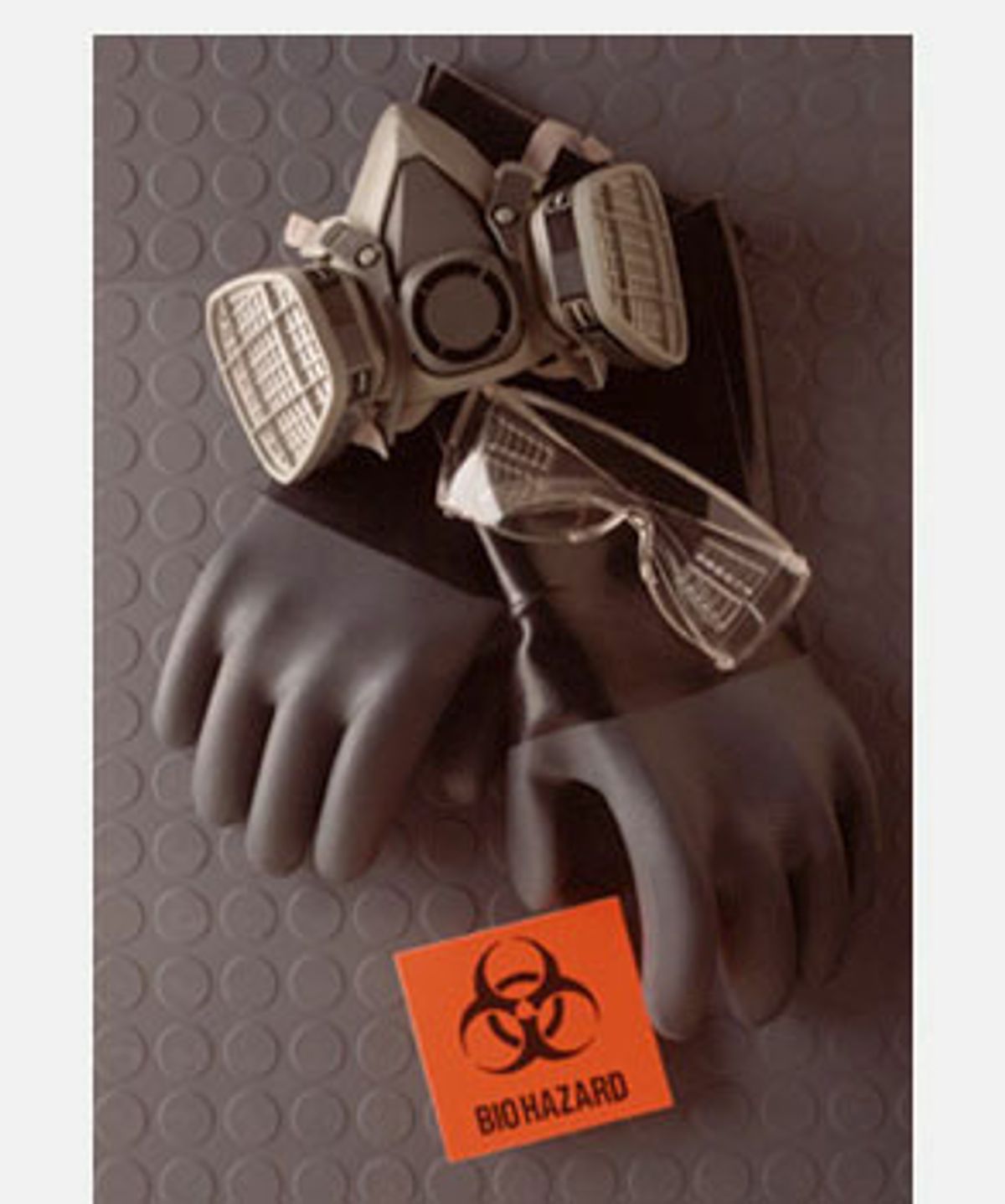 The arrival of letters that claimed to contain anthrax at more than 100 family planning and abortion clinics Monday triggered a new wave of national panic about bioterrorism.

But the sweep of terror by mail brought an entirely different response from the Rev. Donald Spitz, spokesman for the violently antiabortion Army of God. Spitz cheerfully announced that the flood of potentially life-threatening mail "made my day," but he denied having any knowledge of where the letters came from.

It's not the first time abortion providers have dealt with an anthrax scare. According to the National Abortion Federation, there have been at least 80 anthrax threats against providers since 1998, with an epidemic of almost two dozen publicized threats in 1998 and 1999.

This time, a chapter of the Army of God -- the underground antiabortion group in whose name a 20-year crime spree of arson, assassination and bombing has been carried out against abortion providers -- claimed responsibility. "You have been exposed to anthrax," each letter announced. "We are going to kill all of you. From the Army of God, Virginia Dare Chapter."

Virginia Dare is believed to be the first white child born in the New World, in 1587, days after the first colonists arrived on Roanoke Island. Her grandfather was John White, the governor of Virginia.

Over the years, these threats have been characterized in the media as a hoax, since in each case the letters ultimately turned out not to contain anthrax. But this time, the threats to abortion providers are being taken very seriously. Attorney General John Ashcroft in a press conference on Tuesday emphasized that threats that involved biological agents or toxins are violations of federal law, and will be prosecuted. What used to be termed hoaxes, he said, are "no joking matter" and constitute "grotesque transgressions of the public trust."

It's hard for some providers not to wish Ashcroft and other federal leaders had taken the anthrax threat seriously sooner. Now, for the first time, the rest of the country is sharing the fear they generate, as the nation reels with each confirmed anthrax exposure. Suddenly the question of who was responsible for the "hoax" attacks on clinics several years ago has new relevance. Army of God leaders and spokespersons have consistently called for the destabilization of the U.S. government, which they view as demonic, apostate and in need of overthrow. That of course sounds rather like Osama bin Laden. (It's also worth noting that bin Laden denied responsibility for the Sept. 11 terror attacks while at the same time applauding them, much the way the Army of God's Donald Spitz reacted to Monday's anthrax threat on abortion clinics.)

TThe main target of Monday's terror spree appeared to be the Planned Parenthood Federation of America, whose affiliated clinics constituted 94 of the 110 targeted in Monday's mail. (Field tests for anthrax conducted by local officials at 10 of the sites have turned out negative, according to a PPFA spokesman.)

PPFA and others who work in or fund abortion clinics in this country constitute a crack team of private individuals experienced in coping with terrorism and threats of terrorism. Some have weathered 25 years of bombings, arsons, assassinations, as well as death threats and the last wave of anthrax scares. They've had to struggle to protect themselves even as law enforcement authorities have sometimes had a lukewarm response to their victimization. When the last wave of anthrax threats flooded clinics in 1998 and 1999 -- eight Midwestern clinics were targeted in 1998; at least 14 others received letters in 1999 -- many providers were disappointed when the actions were quickly dismissed as "hoaxes," because the letters turned out not to contain anthrax spores, and there seemed to be little law enforcement follow-up.

But clinics and clinic funders took the attacks, and a near-constant flow of death threats, very seriously, preparing thousands of staffers and affiliated workers to handle potential attacks in or away from the clinics. Domestic terrorism, a once obscure idea to most Americans, is something that abortion providers are long familiar with -- and prepared for. Particularly since the anthrax scare of 1998, clinics throughout the country function with protocols for handling a range of threatening situations, and they maintain working relationships with law enforcement agencies and Environmental Protection Agency "HazMat" teams.

"Abortion providers have been living with the fear and suspicion our mail delivery brings for years -- along with the fear of bombs, snipers killing our physicians and staff people and whatever other domestic terrorist activities America's own religious fundamentalists can think up," says Debi Jackson, clinic director at Cincinnati Women's Services, which received anthrax threats in 1998.

Monday's tainted letter attack was very familiar to those who worked in targeted clinics in 1998 and 1999. During the last scare, there were white and brown powders present in each of the envelopes addressed to Planned Parenthood facilities.

As Jackson recalls, security protocols at her Cincinnati Women's Services clinic required her, as director, to open all the mail herself on the day, in February 1999, that the clinic received a supposedly poisoned letter. "The day will be forever etched in my memory as a day of fear, confusion, humiliation, and, finally, empowerment," wrote Jackson of her ordeal in a recent e-mail.

Mailed threats of anthrax exposure had been arriving at clinics around the country for several months, and all clinics were on alert. Still, when she opened what seemed to be routine mail from a medical equipment company, Jackson was stunned to find the paper smudged with a brown powdery substance and decorated with a crudely drawn skull and crossbones. Above the skull someone had typed: "Anthrax." Below was typed, "Have a nice death."

The police and fire departments, as well as the local HazMat squad (those space-suited teams that are now ubiquitous in the front pages of the national newspapers), soon showed up. "Cincinnati," she wrote, "had never experienced anything like this." The surrounding streets were blocked off. She and her staff had to strip and be sprayed with a "cleaning solution" that turned out to be mostly bleach.

Hundreds of state, local and federal officials were involved in responding to the threat, and the clinic had to be closed for several days as officials made sure there was no contamination. Closure of the clinic was, of course, the goal of antiabortion terrorists, and briefly, they claimed success.

When the anthrax mail started arriving Monday at Planned Parenthood clinics across the country, "we were deluged with phone calls," says Adina Wingate-Quijada at Planned Parenthood Federation of America's national office in New York. "And that," she says, "was the good news." PPFA's security staff reported that all of the training, materials, and preparation paid off when the current crisis hit. "The frontline staff at the desks knew what to do," says Wingate-Quijada.

The language of the new, powder-laced notes is eerily reminiscent of a cyber-threat made by federal fugitive and self-described terrorist Clayton Lee Waagner, who earlier this year posted a manifesto on the Army of God Web site in which he said he would kill "anyone who works at an abortion location or Planned Parenthood (I don't care if their location actually performs abortions or not. ALL Planned Parenthood locations are targets.). It doesn't matter to me if you're a nurse, receptionist, bookkeeper, or janitor, if you work for the murderous abortionist I'm going to kill you."

Waagner, who recently was added to the FBI's Ten Most Wanted List, escaped from federal custody in February while awaiting sentencing on federal weapons and stolen-vehicle charges.

Meanwhile, Neal Horsley's antiabortion Nuremberg Files Web site, which promotes the Army of God, also presents scores of federal judges, politicians, law enforcement officers and even President Bush as deserving of prosecution for "crimes against humanity." Their crime? Countering domestic antiabortion terrorists. And Bush, writes Horsley, made a "covenant with the devil" when he agreed to allow federal funding for stem cell research.

It's worth wondering if today's anthrax threats might be understood better if we had paid more attention to the implications of the earlier acts of terror against abortion providers. If the earlier mailings been taken more seriously, we might now be able to better evaluate whether the latest wave of anthrax letters is the work of homegrown American terrorists, as some who follow the far right believe. We might also have evaluated the adequacy of our preparations for an actual anthrax attack, or stepped up the manufacture of drugs for the treatment of anthrax, which are now in short supply.

Surely we should have learned that terrorism , or threats of terrorism, aimed at anyone constitutes an attack on everyone, and on constitutional governance itself. Now we know that the failure to take such threats seriously can limit our capacity to deal with the next crisis.