In a box set that captures the earliest (and best) of this problematic band, you can find a dark side that meshes perfectly with the times. 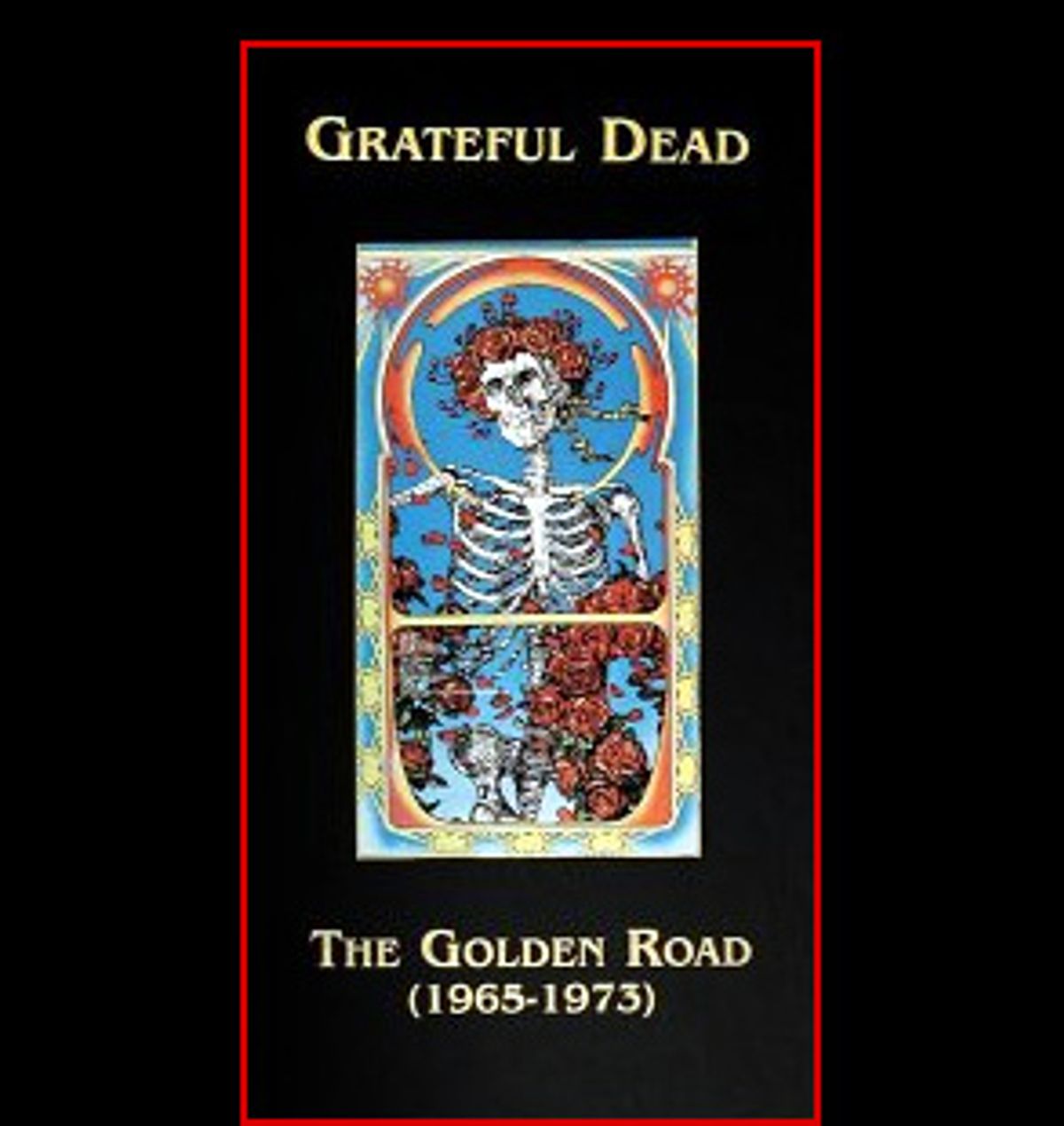 I received a review copy of "The Grateful Dead: The Golden Road (1965-1973)," the swanky new 12-CD retrospective of the band, via FedEx on Sept. 11. A benediction, some might say, a cosmic, healing gift. Well, no. At that point it registered to me only as a small, grim coincidence, and I could not bring myself to listen to it.

Not because I was swept up in phone calls to family, looping network-news mourning and impromptu e-mail home-study courses in Middle East geopolitics, though I was. And not because music was off-limits: I played Björk's electro-pagan prayer-mass "Vespertine" and Kayhan Kalhor's Persian folk suite "Night Music Desert" repeatedly in the days after the attacks, and they helped. Rather, it was because I expected the Grateful Dead's métier -- that parti-colored, sunshine-daydream vibe -- to simply feel offensive in the context of things. Trapped in a state of media disconnect, during which even a trek to lower Manhattan to stare at the ruins of the World Trade Center failed to make it seem any more comprehensible than the Lucasfilm scenes on CNN, I wanted to feel more present, not less.

Now all this is not to give false gravity to a workaday record review, a critical conceit that's admittedly been running rampant ("The work is indeed a slight pleasure in light of recent events, but art is redemptive, blah fucking blah"). I mention it because it feels like an inescapably relevant way to get at what separates the Grateful Dead's musical legacy from the subculture that became both their raison d'être and their curse.

The band began as an aggregate of hypermusical failures. Singer/keyboardist/harpist Ron "Pigpen" McKernan was an outcast white bluesman and high school dropout with a drinking problem. Bob Weir was a severely dyslexic adopted rich kid scarred by spinal meningitis. Phil Lesh was a wannabe classical composer with poor people skills. Bill Kreutzman was a 17-year-old dad gigging in bar bands. And Jerry Garcia was a delinquent Army recruit and underemployed bluegrass player who had only four fingers on his picking hand (thanks to a wood-chopping accident), and who recalled seeing his own father drown.

In the cleareyed liner notes to "The Golden Road," longtime dead publicist Dennis McNally -- whose history of the band is due from Doubleday next summer -- writes that Garcia got serious about his guitar playing after a car crash that sent him through the windshield and killed a good friend. The band fell together not long thereafter.

It's illuminating to think that the artistic birth of one of rock's greatest, most sublime and most joyous guitarists occurred with the big bang of a near-death experience. After all, Garcia chose the band's name (over the objection of Weir, who always hated it), and if you spend some quality time with the 12 CDs in "The Golden Road," you'll find an uncanny obsession with life "in articulo mortis," the lamentation of lost comrades and other ruminations on mortality that give lie to the Dead's rep as a smiley-face, keep-on-truckin' party machine. I've been a fan, with certain caveats, for years. But even I was surprised to be reminded that the Dead were as much about mourning as celebration -- two sides, the music seems to argue, of the same thing.

The box collects the eight albums the band released through Warner Brothers from 1967 to 1973, with assorted outtakes, live recordings and ephemera tacked on, plus a couple discs' worth of rare early material dubbed "Birth of the Dead." The band was at its strongest during these years, and the set charts a neat, six-year LSD-trip arc after which the band (mostly) settled into the cruising pattern it rode until Garcia's death in 1995.

The proto-Dead material on the "Birth" disc and the band's self-titled debut showed a revved-up blues outfit with a taste for the dark side of folk realism. "Anthem of the Sun" is a muddled document of acid-test cosmologists in mid-trip head-rush confusion. "Aoxomoxoa" is a psychedelic peak perfectly translated. "Live Dead," the first of what would be the Dead's virtually innumerable catalog of concert recordings, shows the band riding that peak in stretches of fearless and deeply musical improvisation. "Bear's Choice," "Workingman's Dead" and "American Beauty" are artfully sentimental, song-oriented comedowns -- the latter pair mixing antediluvian folk and modern psychedelia in two of the most lasting entries in the classic-rock canon. (The sitcom "Freaks and Geeks" once devoted an entire episode to "American Beauty.") "Grateful Dead" (aka "Skullfuck") and "Europe '72" are attempts to recapture the full gamut in epic live shows.

For a band whose vaults have been legendarily plumbed by both DIY tape-traders and Grateful Dead Productions Inc. (which has released more than 50 CDs' worth of archival live recordings and given rise to an economy-of-scale-driven collector's marketplace that, if its lessons were noted, might make jazz profitable), it's remarkable that any of the addenda on "Golden Road" would feel genuinely revelatory.

But consider "Fire in the City," a lost 1967 track with jazz singer Jon Hendricks and recorded for the Vietnam War protest documentary "Sons & Daughters," that appears on the "Birth" disc. The song is a Dylan-esque revival-meeting boogie that begins with a restless bass line and Hendricks' exclaiming-preacher style: "Pause for a minute and ask yourself why/the red globe of fire lights up the sky." The song goes on to offer a Dante-esque tour of the inner city, and concludes near the end that "at the sound of the siren you really know/that you truly do reap just what you sow." More about the 1965-'67 race riots than global interventionism, the song breaks for two concise, barbed-wire guitar solos by Garcia that unite his bluegrass-inflected runs and his electric blues snarl in a coalition both angry and pained.

Throughout "Birth of the Dead" is the growling R&B of Pigpen ("Pain in My Heart," "I'm A King Bee," "Big Boss Man," etc.), a defining aspect of the band's early sound, as well as traditional songs whose bleakness becomes a sort of exorcism. New to me is a raggedly haunting cover of "In the Pines," the murder ballad made famous by Leadbelly and again by Kurt Cobain. Most affecting, though, is the funereal J.F.K. tribute "He Was a Friend of Mine" (recorded by Bob Dylan, among many others), in which Garcia comes to terms with death in stages, his voice trembling on the first verse, then softly resigned and finally steeled with acceptance.

The members of the Dead would deal with plenty of death over the years -- from their comrade Neal Cassady (eulogized in both "That's It for the Other One" and "Cassidy"), to homegirl Janis Joplin (ditto "Bird Song"), to Pigpen and others -- and it informs a large amount of the material here. Sometimes it's addressed head-on, as in "Death Don't Have No Mercy." Sometimes it's metaphoric, as in "And We Bid You Goodnight." Sometimes it's narrative, as in "Black Peter." Sometimes it's abstract, as in "Dark Star" (a sort of interstellar vision of apocalypse) and "Morning Dew" (about the aftermath of nuclear war), the band's two greatest improvisatory vehicles. Even in their jams, there is a levity and, at best, a life-and-death tension that I'd venture comes from this willingness to stare into the abyss. Those who've taken serious psychedelic trips -- or are simply burdened with acuteness of perception -- know that said abyss is always lurking behind whatever bliss is at hand, ready to pounce. It gives bliss meaning, and may, in fact, enable it. The Dead operated with that understanding in the forefront of their minds.

For a while, anyway. By the time of "Europe '72," while their technical proficiency was at its height, there was a certain back-country balminess taking the edges off of the Dead's music. Chief lyricist Robert Hunter was scripting his absurdist theater of mythic Americana, drawing characters like "Jack Straw," "Tennessee Jed" and "Mr. Charlie," and skirt-twirling anthems like "Sugar Magnolia" were defining the band's sound. In time, even their iconography would change, from the rose-crowned skeleton on the cover of the so-called "Skullfuck" album to the omnipresent grinning teddy bear, boogieing obliviously on bumper stickers coast-to-coast. And I suppose that's understandable. Life gets scarier over time, death is easier to entertain when you're at a distance and even the greatest rock bands lose a certain kind of fire after a while. "The Golden Road," thankfully, stops just before this happens.

What's unfortunate, though, is that the huge network of "jam bands" that have sprouted in the Dead's wake seem to be modeling themselves on the later, lesser version of the original, happy and peppy and noodling their troubles away. It's impossible to imagine Phish or String Cheese Incident or Les Claypool's Frog Brigade covering "Death Don't Have No Mercy," for instance, let alone inbuing it with any weight. Gov't Mule and the Disco Biscuits, among others, can get into some dark and heady improvisational recesses, but I've yet to hear any offspring that capture the balance of darkness and light that the Grateful Dead conjured during their best years.

That in mind, I turned off "The Golden Road" with the hope that maybe the current generation of jammers, and fans, will take from it a sense that to truly know rapture, you first need to know how to grieve. The set contains all the Grateful Dead music most folks will ever need, lacking only their sole great latter-day LP "Blues for Allah." Needless to say, at this particular moment, that reissue is overdue.

Will Hermes is a senior editor at Spin.

MORE FROM Will Hermes