Honey, I blew up bin Laden

The U.S. Army has asked Hollywood filmmakers to brainstorm terrorist scenarios. Here's one the olive drabsters will be gung-ho to greenlight. 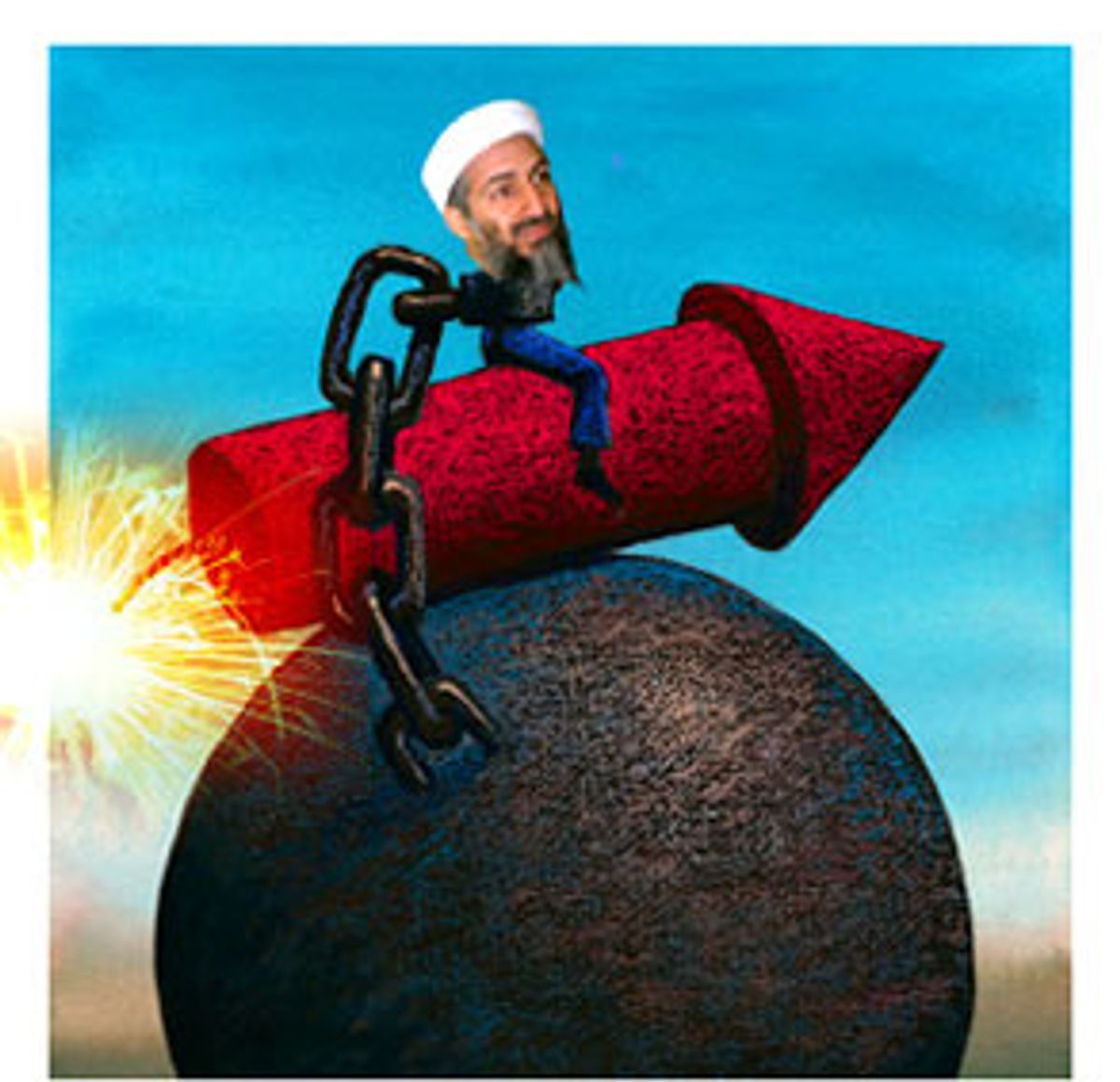 Some of Hollywood's top action filmmakers ... are helping the U.S. Army dream up possible terrorist threats America might face in the future ... one official confirmed a report in the entertainment trade paper Daily Variety that participants included "Die Hard" screenwriter Steven E. DeSouza, television writer David Engelbach ("McGyver") and movie director Joseph Zito, whose credits include "Delta Force One," "Invasion U.S.A." and "Missing in Action." Also joining the panel were directors Spike Jonze ("Being John Malkovich"), David Fincher ("Fight Club," "Seven"), Randal Kleiser ("Grease," "Honey, I Blew Up the Kid") and Mary Lambert ("The In Crowd") ... [T]he team was asked "what kind of things could possibly happen, and how could they be prevented." Results of the discussions will ultimately be presented to the Army.

Hey Major, a quick follow-up to the meeting. Loved the whole blindfold/undisclosed location thing you threw at the group. Very Army, if you know what I mean, and I know you do. The stretch humvees and lattes were also a nice touch.

So OK, how about this? Just spitballing, you understand.

Bin Laden leases a bunch of Saturns, OK? His cronies, disguised as marketing execs, stall them on the freeway at the height of rush hour. Calmly walking to the nearest mall, they charge thousands of dollars worth of video equipment. They cart it all out to the parking lot, where they force soccer moms at gunpoint to take them to the suburbs.

There they set up the equipment and make a soccer mom (Meg Ryan) watch bin Laden speeches until she's cranky and irritable, open to suggestion.

Flash forward to the "Gas Masks for Puppies" bake sale that the Moms have organized. The brainwashed Meg puts opium powder in the masks, under the hypnotized delusion that it's baby powder. The fiendish plan is to get America's puppies addicted, so that withdrawal will make them cranky and irritable, open to suggestion.

As part of their scheme, the terrorists aren't paying their credit card bills. This is forcing credit managers to work overtime, making them exhausted and jumpy. One of them (Tom Hanks), crunching numbers late at night, puts two and two together. The video, the baby powder, the abandoned cars can all only mean one thing: There's a terrorist cell at work in Lawndale.

But when he calls the FBI (Tom Sizemore) they tell him they need proof. So he disguises himself as a Federal Express employee and infiltrates the neighborhood. Through a window, he sees a group of suspicious-looking men in turbans and Cub Scout uniforms carefully placing rabies in Christmas ornaments.

He discovers that terrorists have also infiltrated the high school, where they have formed an elite clique of basketball players who shun unpopular students, making them sullen and withdrawn, unable to shop. Some terrorists have even disguised themselves as eighth-grade boys, who plan to travel to Washington secretly, to place tacks on the chairs of Congress, and short-sheet the president's bed.

To his surprise, he discovers bin Laden himself (a David Schwimmer type, only with gravitas, evil gravitas), dressed as Santa Claus on a street corner, handing out suspicious packages marked "Christmas kitten surprise. Do not open!" Following him back to his coven, we learn that bin Laden is just one of many bin Laden robot replicas, some of them alien in origin.

Obviously, Tom needs help. Enlisting the aid of crusty Chuck Norris, he breaks his old buddies out of prison for one last job. This time, they're playing for keeps.

In the meantime, Meg has learned that her children have been replaced by terrorist clones, who have formed a boy band called N'Ladz, who plan to stage a concert at which they will perform songs with a special coded message urging us to be fearful and get Israeli tanks out of Palestine. They also plan to infect themselves with a nagging flu virus, and sneeze upon their preteen admirers at a preordained signal.

Luckily, Meg discovers a magic door in her ranch-style home which allows her to enter the mind of Osama bin Laden, and thus learn of his plan to enlist a top secret society of normal American joes who hate their jobs, and like to punch each other senseless in alleys and basements under restaurants. These men will become unwitting dupes in a plan to assassinate 10 random U.S. mayors, using the Plagues of Egypt.

Bruce Willis and Steven Seagal, battling their way through formerly Communist shock troops, learn that bin Laden is a clone with the power to bend metal with his mind. He and his minions have the ability to create giant toddlers with enormous destructive abilities. Hooking up with Jean Claude Van Damme and Brad Pitt, they realize they're helpless in the face of this new threat. They have the simulation of the master plan right there on their computer screen. Las Vegas. The Mall of America. Disney World. The space program. Are they doomed?

Now only five teenagers with mutant powers stand between a lean gang of annoying zealots and world domination. But when these hotties get hot under the collar -- Watch out, Taliban!

For weapons, all they have is a pack of gum, a hairbrush, dental floss, a book of matches -- and guts. A lot of guts.

And let's not forget Tom Hanks. Or Meg Ryan. Yes, the kids have them too. Thanks to their courage, know-how, determination and split-second decision making, bin Laden meets his maker in a fiery conflagration just above Orlando.

We close on a kiss. Now little Tommy has a mother at last. Snow gently falls on the runway as the sun rises on a new tomorrow.

Well, OK, the bit with Palestine and the Israeli tanks may be a bit too Sorkin, if you know what I mean. And we need to check the avail of Chuck Norris. Oh, I was meaning to ask. Does bin Laden have to be a terrorist? Can we lose that? I mean, that's kind of played, isn't it?

Merle Kessler is a scriptwriter, lyricist and humorist. Some may be more familiar with him through his bitter alter ego, Ian Shoales. He lives in San Francisco.