I mean, are they still "Friends" then? Plus: Back to "Gilligan's Island"; "Crossing Jordan"; "Third Watch"; and more! 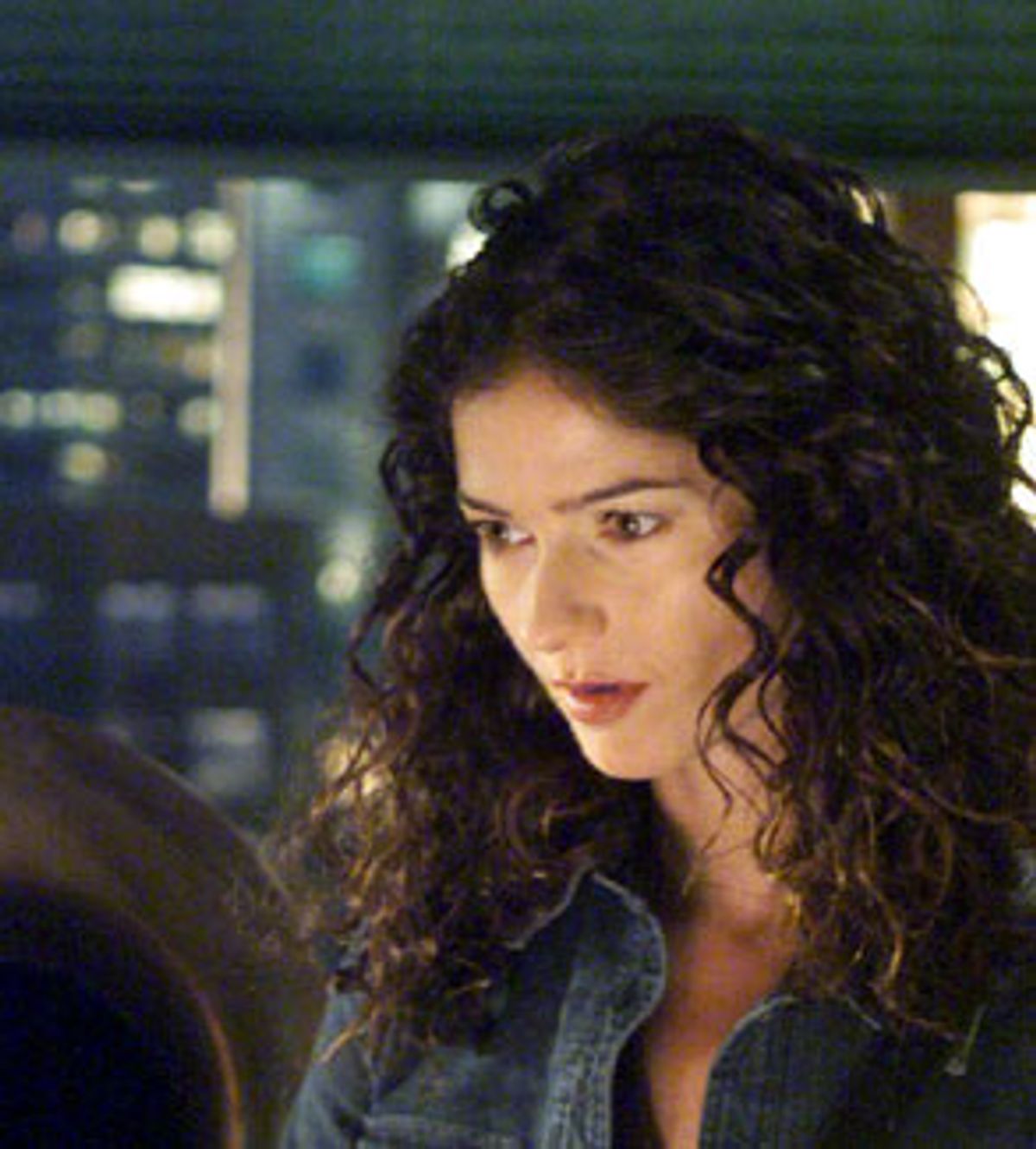 For "Friends," they sure spend a lot of time in each other's pants. Rachel is having a baby, and guess who the father is! The kids meet the (Ross) news with their usual dropped jaws, high-pitched squawks and zany non sequiturs, but nobody even bats an eye when Rachel's OB-GYN performs the world's first remote ultrasound -- presumably capturing an image of the Geller-Green fictional fetus via the air from clear across the room. Also, Ross wants to get married, Rachel doesn't. We will have to wait until -- yawn -- Part 4 of the series opener to find out what happens. We may have to wait all season. We may have to wait our entire lives.

"Surviving Gilligan's Island: The Incredibly True Story of the Longest Three-Hour Tour in History" was not exactly the lurid tell-all the weary title and preshow hype suggested, but the campy behind-the-anecdotes look at the making of the unaccountably popular 1960s sitcom won CBS 13 million viewers Sunday night. It featured Dawn Wells (Mary Ann), who co-executive produced the docudrama, baking coconut cream pies on a desert island set, fondly recalling how the show came to be and what a bitch Tina Louise was. Most compelling previously unknown fact about the castaways: Alan Hale loved being the Skipper so much he wore his cap everywhere and called his wife "Li'l Buddy."

Other, more family-friendly morsels of interest: The S.S. Minnow was named after Newton Minow, the FCC chairman who coined the description of television as a "vast wasteland." Minow urged network executives to become more involved in the creative content of their shows, making them even more meddlesome and annoying to "Gilligan" creator Sherwood Schwartz. (To really stick it to Minow, Schwartz went on to create "The Brady Bunch.") After just three seasons, "Gilligan" was canceled but has never been off the air since. Finally, did you know that Mary Ann got more fan mail than any other "Gilligan's Island" character, including that bitch Ginger, who was not asked to join the cast of "Surviving Gilligan's Island: The Incredibly True Story of the Longest Three-Hour Tour in History"? Well, she did.

Speaking of survival, it's "child star" week on the E! planet, where that jittery feeling never really goes away. Only a few days after President Bush's humanitarian plea for the starving children of Afghanistan, E! reminds us of the plight of suffering children who are sometimes forced by networks to go on diets. (Those poor, poor "Facts of Life" girls. You know, the diets never helped. They only made things worse.)

Despite having been practically born and raised on a television show (and not just any television show, "Full House"!), real-life "Truman Show" experiments Mary-Kate and Ashley Olson have turned out just fine. For impish teen media and retail moguls, the twins are reputedly extremely polite and well behaved. (Underemployed former co-stars Bob Saget and Steve Guttenberg will gladly attest to this on camera, several times if necessary.)

The twins' empire was born when they formed their own production company at the age of 5. Since then, the girls have spawned several video series, books, television movies, a clothing line for Wal-Mart and a teen magazine. Plus, they are best friends.

Wait. Is this the right channel? Where are the drug problems, the eating disorders, the armed robberies, the plastic-surgery horror stories? It turns out this is not, as I had thought, an E! "True Hollywood Story," it's an E! "Celebrity Profile," a kinder, gentler invasion of privacy, reserved for celebrities who can still feed the mouth that will bite them later. And it will bite them later. "Will the twins manage to dodge the usual perils of child stardom?" asks E!, licking its chops. "There are too many people around them making sure they stay on track," replies Jill Zimmerman, head of production for Dualstar (and you know who the dual stars are) Entertainment. This would include Dualstar president Robert Thorn, he of the sharp marketing instincts and the hair-plug halo. Jill and Robert, you know, they're just doing it for the kids.

"Third Watch," the "gritty" (in the way that your bathing suit chafes after a day at the beach) action series-cum-melodrama about the interpersonal conflicts and explosive tempers of a group of fictional New York firefighters, cops and paramedics, wrapped up a series of stories related to the Sept. 11 attack on the World Trade Center with a two-hour special called "In Their Own Words." The special featured real-life rescue workers talking about their terrifying experiences trying to save people and recover bodies in the aftermath of the attack. At the top of the show, a title card read, "These are the people we portray on 'Third Watch,' and these are the reasons we portray them." We would have preferred to see a title card from the rescue workers justifying the actors' presence instead -- maybe next time, if it's all the same to John Wells.

Aside from the catchy Biblical reference, what is the title "Crossing Jordan" supposed to suggest? That people are always crossing Jordan, inciting her righteous rage? That you'd have to "cross" Jordan to escape the long arm of the law? Hmm.

Jill Hennessy plays Dr. Jordan Cavanaugh, a putatively "sexy, brilliant and fearless Boston medical examiner with a checkered career -- and a penchant for going beyond the call of duty to investigate crimes." (What ever happened to "brilliant and fearless" crime-fighters who look like Cagney and Lacey?) After a girl is murdered at a strip club owned by the Russian mob in the third episode, Jordan shows up to retrieve the bodies in an outfit so saucy she is mistaken by one of the girls by a couple of guys in the parking lot. When they ask to see the toys she has in her bag, she shows them a liver thermometer.

Jordan is a coroner who gets so emotionally involved with her corpses she just can't help darting off to solve the crimes herself. Thanks to an understanding boss (Miguel Ferrer), and a dad (Ken Howard) who's as crazy as she is (he's an ex-cop who was kicked off the force after becoming obsessed with his wife's murder), Jordan can A) take time off work performing autopsies to do the FBI's job right by doing it herself, and B) solve the crime in the last three minutes of the show by sitting across the table from her father, playing a role-playing game of victims 'n' perps. This week, things get really creepy in those last few minutes, since the crime is an apparent murder-suicide between a stripper ("Woman," Jordan snaps, when a colleague tells her to take the stripper) and a Russian mobster.

A high-tech Quincy with model looks, the personality of a 14-year-old boy and the mouth of a truck-driver, Jordan as a crime-fighting forensic pathologist is about as believable as a flying pygmy hog as a crime-fighting forensic pathologist. In one scene, she comes home from a hard day at the crime scene and is just letting her hair down, stripping down to her red lace camisole and peeling off her spike-heeled boots, when a knock at the door reveals the one thing in this world that Jordan really fears -- commitment!

It's Tyler, her ex-boyfriend from Los Angeles, who has swung by on his way to Patagonia to get all Deepak Chopra on her. You can tell they are in love by the way they don't let each other talk. The dialogue is saucy, like this:

Time to change the channel?