Panic in the Capitol

Thirty-one Hill workers test positive for Anthrax exposure, and a day of conflicting reports ends with only a little reassurance. 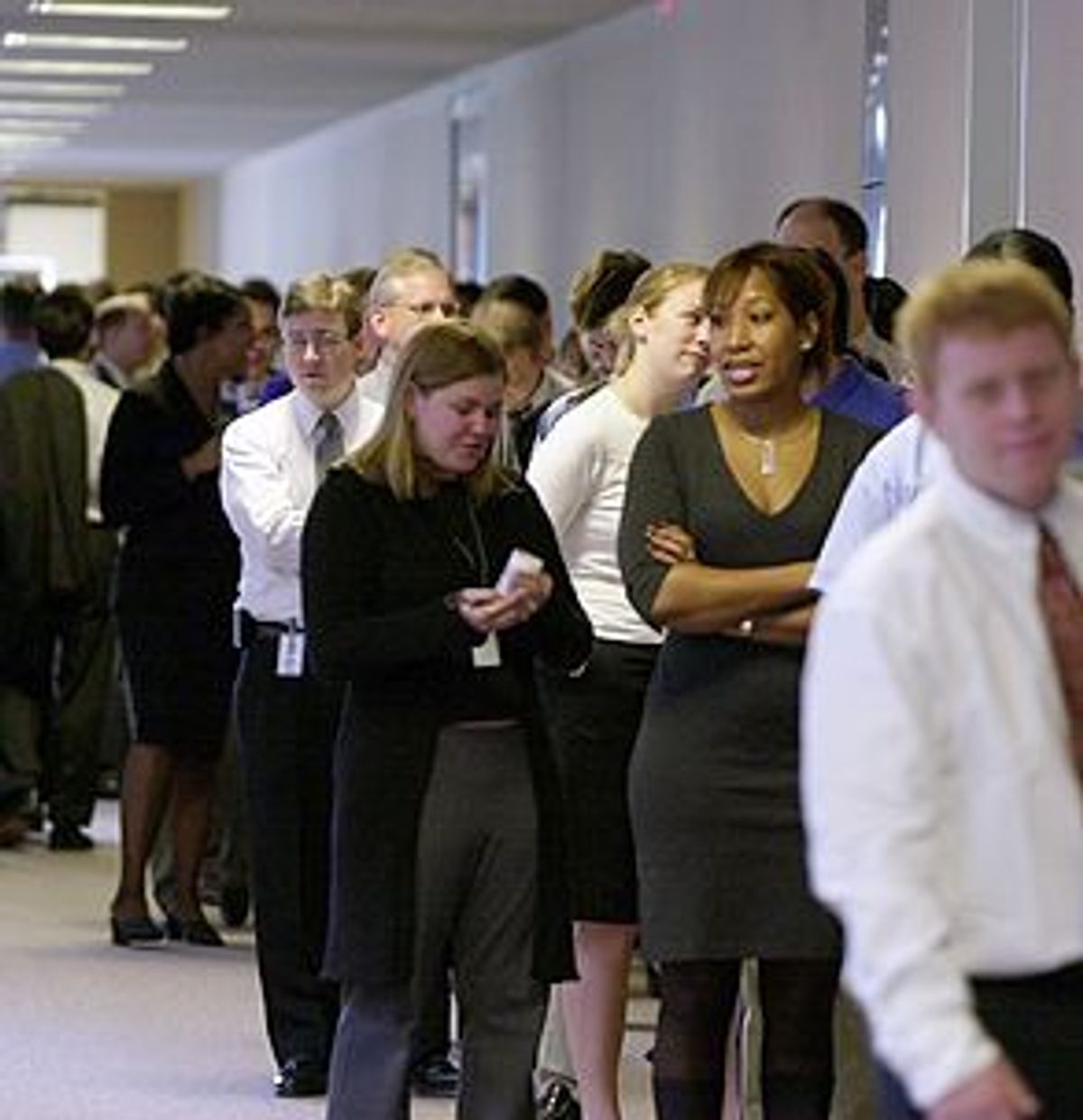 In what would turn out to be a particularly bad omen, staffers for Senator Majority Leader Tom Daschle, D-S.D., were confronted last Friday by a tuft of caribou fur hand-delivered by a constituent, a quirky sort of thanks to Daschle for protecting the Arctic National Wildlife Refuge, the homeland of many a caribou.

But that day carried news of anthrax spreading from tabloid offices in Florida, to Tom Brokaw's assistant in New York. They took no chances, and called the Capitol Hill Police, who immediately sent a team to check out the strange package. The ruled it a perfectly safe, if odd, present.

Still, it demonstrated how on-edge government staffers had already become before a truly dangerous envelope arrived in the mailroom of Daschle's South Dakota office in the Hart Senate Office Building Monday morning, with the seemingly harmless return address of "4th grade, Greendale School, Franklin Park, N.J." And as Congress settled into a sort of controlled panic Wednesday, with the announcement that 31 Hill workers had tested positive for anthrax exposure, it was enough for many to wonder what grim news Thursday might bring.

As has typified so much of the governmental response to this crisis, the mixed messages from different officials in the letter's wake made it difficult to distinguish between false reassurance and good news, between spin and candor. Was it a virulent and high-tech type of anthrax, the fine-ground kind that only could be manufactured with state sponsorship? Or was it low-grade, garden-variety, eminently treatable? Were the dangerous spores free-floating throughout the area or contained? Were you at risk only if you'd been in the immediate vicinity of the anthrax letter, or had an entire ventilation system been compromised?

For the most part, officials tried to coo the most reassuring answers to all of these questions. But at the end of day, the authority of their answers could only be taken with a grain (or is that a spore?) of salt.

Wednesday morning, having seen images of the envelopes of the anthrax-laden letters sent to Brokaw and Daschle on the front page of the newspapers, an administrative staffer for Speaker Dennis Hastert, R-Ill., recalled a similar-looking letter that had arrived in the mail maybe 10 days before. She had placed that letter, unopened, into a bag of suspicious letters -- called a "burn bag" -- which was delivered to the FBI on Wednesday morning.

By the end of the day -- which brought news of the presence of anthrax in New York Gov. George Pataki's New York City office, as well as preliminary results that the Florida and NBC anthrax strains appeared to be the same -- Hastert had announced that the House would adjourn early. The Senate closed its three main office buildings while remaining open for votes in the Capitol building itself on Thursday.

On Wednesday morning, Daschle told reporters the alarming news that since the anthrax letter was opened Monday, health officials had ruled that "31 people now have had positive nasal swabs."

He rushed to point out that "there is a huge difference between a positive nasal swab, which only indicates exposure, of course, and infection," stating that no one had yet tested positive for infection. The 31 people were eventually identified as five Capitol Hill police officers, 23 Daschle staffers and three staffers for Daschle's office neighbor, Sen. Russell Feingold, D-Wisc. -- though some of those numbers continued to be challenged throughout the day.

But hundreds of Senate staffers remained nervous as they awaited the results of the anthrax nasal swab tests, many of which were scheduled to be ready Thursday.

And there was reason to be nervous. It was unclear just how easy it was to be exposed to the anthrax spores. Not all of the 23 exposed Daschle staffers, for instance, had been on the 6th floor where the mailroom was located; some had been on the 5th floor.

Daschle said that it was his understanding that some in his office were exposed to anthrax by hugging other staffers, and picking up the spores from another person's clothes. Dr. Kenneth Mortsugu, deputy surgeon general, said that there was an open stairwell between the two floors in the office suite, and the spores could have floated easily from floor to floor.

Nor, according to Feingold, had any of his staffers been in the immediate vicinity -- suggesting that the spores were being transmitted more quickly and efficiently than at NBC or in the Florida offices of American Media Incorporated. Feingold speculated on CNN that his staffers' exposures were due to the fact that his office is "extremely close to Senator Daschle's mailroom." Lt. Dan Nichols of the Capitol Police allowed that his officers were apparently not wearing suits to protect them from hazardous materials when they answered the call from Daschle's office. "We don't know what we're dealing with when we walk in the door," he said.

Mortsugu said that "at this time" the exposure appears to be "confined to a very specific area of the Hart Building." He recommended that anyone who had been on the 5th or 6th floors of the Hart Building on Monday morning begin taking the antibiotic Cipro for 60 days.

Immediately after the letter was opened at around 10:15 Monday morning, Daschle's staff called the Capitol Hill police, who were on the scene immediately. Daschle's Hart Building office, as well as the next-door office of Sen. Russ Feingold were cleared out.

The staffers who had been in the immediate vicinity of the letter were isolated.

Daschle staffers were tested with swabs and given Cipro. Shortly after noon on Monday, at a photo op with Italian Prime Minister Silvio Berlusconi, Bush was asked if he knew of any other anthrax incidents. "I just talked to Leader Daschle," Bush said. "His office received a letter, and it had anthrax in it. The letter was field tested. The staffers that have been exposed are being treated. The powder that had been field tested is now, obviously, going to the [Centers for Disease Control] lab. Beyond that, I don't know more about it."

Inside the Hart Building, a ventilation system was shut down. The southeast wing of the eight-story building was closed, clearing out 12 Senate offices. Capitol physician John Eisold announced that anyone who had been in the Hart Building should be tested for exposure to anthrax. Medical personnel began conducting nasal swabs and doling out Cipro. Mail to the Capitol was canceled, as were public tours.

Then came the really alarming news, delivered by Daschle himself, that this strain of anthrax was perhaps less controllable, and treatable, than that received in New York and Florida.

Daschle told reporters on Tuesday afternoon that tests conducted on the anthrax at a military lab in Fort Detrick, Md., indicated that the letter contained a "very potent form of anthrax that clearly was produced by somebody who knew what he or she was doing" -- a one- or two-micron strain that could easily be spread through the air and into the lungs.

But then on Wednesday morning medical officials brought in to talk to Daschle staffers told them that "this is garden-variety stuff that 1950s penicillin could kill, let alone 2001 Cipro," according to one staffer. Suddenly, Daschle's initial report that this was a "very potent form of anthrax" wasn't necessarily the case.

Gen. Jon Parker from medical research and material command at Fort Detrick repeated this assessment on Wednesday afternoon, saying that the anthrax sent to Daschle is "sensitive. We culture it on a plate, and then we put antibiotics on that plate to see if it's sensitive to the antibiotics. This particular strain of anthrax is sensitive to all antibiotics; penicillin, all the way through ciprofloxacin. It's a very sensitive strain."

"Some of the preliminary information we were hearing or that was being repeated turned out not to be completely accurate," Minority Leader Trent Lott, R-Miss., later explained of his Democratic colleague's fears. "What we were thinking this morning at 7 was not necessarily the same thing that we found out at 10." Daschle said that regardless of its potency the most important matter was that exposure to the anthrax is "100 percent treatable."

Confusing matters even more, Sen. Dick Durbin, D-Ill., took to the Senate floor and said that one spore had been found in the ventilation system. A Senate source later said that Durbin had been misinformed.

Robert Gibbs from the Defense Advanced Research Projects Agency said that his team was "following that letter backwards through the system," tracking anyplace the letter may have been and testing for any contamination, including the ventilation systems. Morstugu reported Wednesday evening that there was "no evidence of spores in the ventilation system at this point."

Moreover, Hastert characterized the anthrax letter sent to Daschle as "unlike anything that we've seen up to this point." He described it as "sophisticated in that it had -- it was very friable; it was almost an aerosol type of situation on a powder. When they opened the envelope, this thing sent out a plume."

But Daschle staffers contradicted that description, saying that it was just a simple powder that spilled out. "It wasn't a 'plume' like Hastert said," one staffer said.

Hastert announced that the House would recess at the end of the day, reopening on Tuesday. "We don't know what's come through our postage machines," Hastert said. "We aren't sure what has been distributed. We've held the mail in members' offices. But we think it's prudent also to take some time and go through and make sure that this building is -- this building and the -- our office buildings are environmentally safe."

The Senate leadership, on the other hand, decided to keep the Senate in session, holding votes on Thursday, though they announced that the three major Senate office buildings would be shut down and inspected as well.

Senate aides explained that the House leadership was responding to the earlier, more frightening news about the potency of the anthrax, while the Senate had calmed down a bit after the reassurance of health officials. A GOP House leadership aide dismissed that, pointing out that the Senate was shutting down its three major offices for the same Department of Defense sweep House buildings would soon go through. The Senate was going to have votes, but those were "just for show," the House aide contended.

Indeed, at a Wednesday evening press conference, members of the Senate seemed to be trying to cool things down. "Things are very much under control," said Sen. Bill Frist, R-Tenn., the only physician in the Senate. "Everything's going to be OK." But for many, the unanswered questions, contradictory information and fear of the unknown undermined the heart surgeon's attempts at reassurance.