Antiwar sentiment still runs deep in cities like Berkeley, Madison and Cambridge. But peace activists are being confronted by a strong wave of pro-war patriotism. 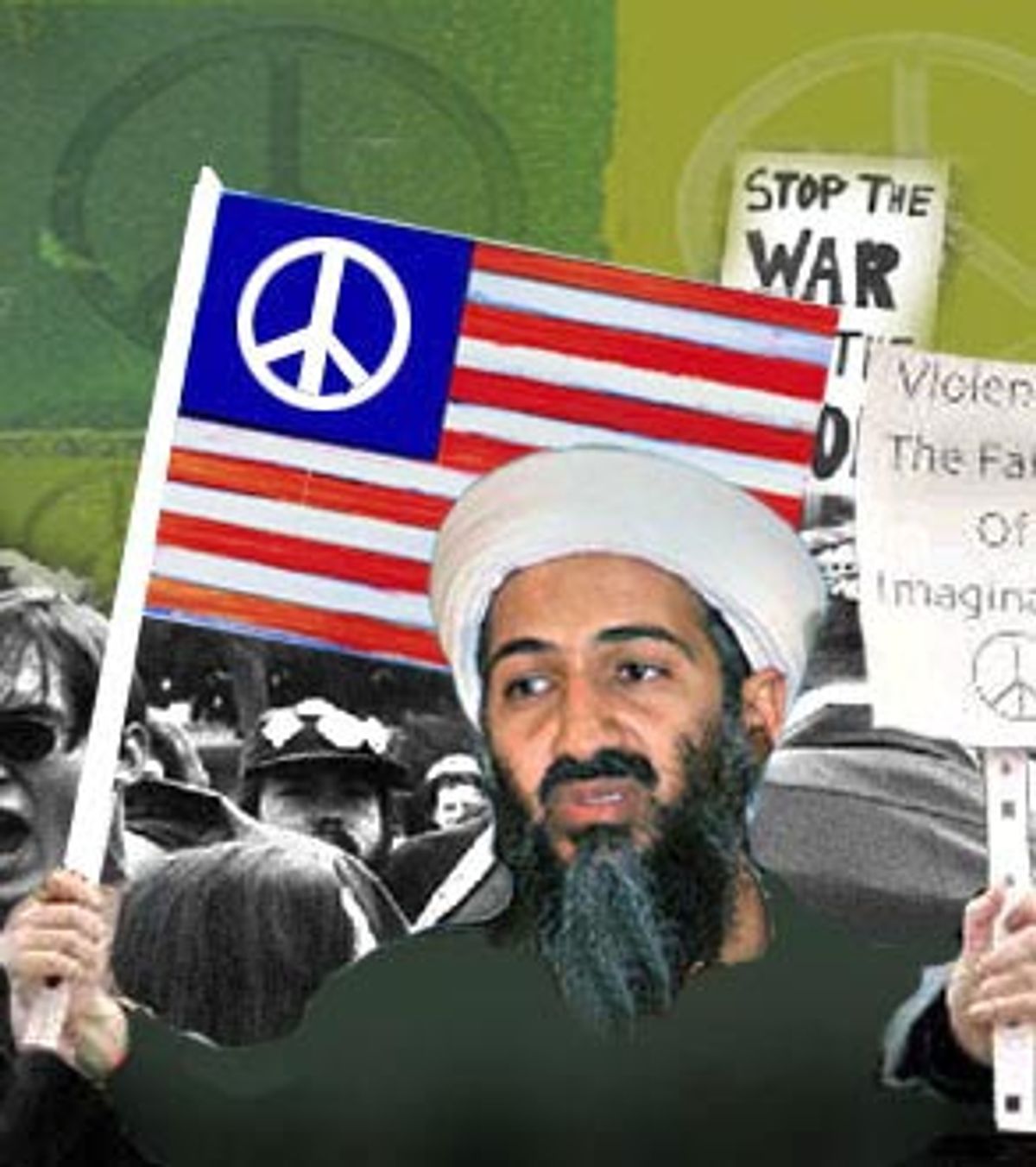 The Berkeley City Council's call for a quick end to the bombing of Afghanistan sparked a wave of outrage across the country this week. The Berkeley resolution, which was passed on Tuesday, has drawn the kind of obsessive coverage from Fox News that it once lavished on Gary Condit's relationship with missing intern Chandra Levy. The conservative National Review denounced the ever-tolerant city for finding "something new to tolerate: the murder of 6,000 Americans by fanatical terrorists." Letters, phone calls and e-mails filled with fury and disbelief poured into Berkeley's City Hall.

"In my eight years working here, I've never seen this kind of outrage," says Susan Wengras, legislative aide to Betty Olds, a City Council member who voted against the resolution. "Parents in other cities are calling to say that they've cut Cal off their children's list of potential colleges. Others are talking about a boycott of Berkeley businesses, and we've also gotten some letters from people saying, 'I lost three friends. How dare you do this?'"

But while the media plays up the "only in Berkeley" radicalism of the measure, many local observers say the real surprise is how hotly debated it was and how relatively moderate was its wording. The resolution barely squeaked by, on a 5-4 vote, passing only after its language was softened; while the council's antiwar members favored an immediate cessation of the U.S. bombing campaign, the final resolution called on President Bush to stop the air raids "as soon as possible."

In fact, the Berkeley resolution doesn't show a city united in its antiwar opposition, but a city divided. "Deeply split," in the words of Mayor Shirley Dean, a moderate Democrat, who opposed the measure.

What's more, Berkeley is not alone. Other liberal college towns with a strong antiwar tradition -- such as Madison, Wis., Cambridge, Mass., and Santa Cruz, Calif. -- are also experiencing a political identity crisis following the carnage of Sept. 11. Aging activists whose antiwar convictions date back to the Vietnam War era still have influence in these communities, but their power to define public opinion and city policy has greatly diminished.

The change is partly demographic: The '90s boom brought more wealth and fewer radicals to these cities, attracting people who cared more about good schools than international politics. But even longtime residents say the Sept. 11 attacks altered many people's convictions. Some liberals who marched against Vietnam believe that bombing Taliban and terrorist targets in Afghanistan is justified.

"This is not the '60s revisited," says Jane Bear, a Santa Cruz resident and former antiwar activist who attended a City Council meeting Wednesday that debated the current crisis. "We always said [during Vietnam] that if we were attacked on our own soil, and our own civilians were killed, that that would have changed everything. Now it's on our soil. Now the new generation has to do away with the rhetoric of the '60s and come up with a way to deal with what's going on."

Rethinking attitudes toward U.S. policy is no easy proposition in cities like Berkeley, where the municipal government has long condemned America's foreign affairs, from the Vietnam War to investment in South African apartheid. The Reagan administration's military involvement in Central America prompted the city to declare itself a sanctuary for refugees from El Salvador during the '80s, and more recently, the City Council passed a resolution that declared solidarity with the nation of Tibet. One day each year, the city flies the Tibetan flag over City Hall.

But the Sept. 11 attacks have forced even the most liberal enclaves to reevaluate their political views. Berkeley's Wengras says that she marched against the Vietnam War and never expected to support Bush, whom she calls "a moron." "But this is a different time, a different war. We were attacked at home; we lost over 5,000 innocent people. We can't let this go unanswered. How can you let people use human beings as missiles? When terrorists come and do this to us, we have to respond."

Berkeley City Council members who share Wengras' view tried to kill Tuesday's controversial resolution, but they settled for watering it down significantly. The original draft condemned U.S. foreign policy in Israel, Saudi Arabia and Iraq, but opponents got that language removed. The final draft called for a halt to the bombing "as soon as possible," rather than immediately. And it contained a sentence offering condolences to families who lost loved ones in the attacks.

Because the press and public have come to expect radical measures from Berkeley, complains council member Linda Maio, they ignored the fact that she and her colleagues worked very hard on the language to make sure "it didn't look like we were trying to tie the government's hands," she says.

Nonetheless, the resolution has brought scorn and derision on the city; it has been widely denounced as naive, simple-minded and even traitorous. Opponents have threatened to boycott the city, and that scares political leaders already coping with a local economic downturn. Mayor Dean says that a local lumber company lost a $60,000 contract, and that the Chamber of Commerce has received dozens of complaints. Some people have even asked the chamber to cancel their local restaurant reservations for them.

"I just went to KTVU [a local TV station] for [Fox News show] 'The O'Reilly Factor,' and before I left, I checked my voice mail," Dean says. "Of the last 26 phone calls, 20 mentioned the boycott. I'm very worried about that."

Given the potential damage to the city, Maio says she has some regrets about even the watered-down resolution. "If I had known that it would have been mischaracterized as a condemnation of the bombing, I wouldn't have voted for it."

Madison, home of the University of Wisconsin, has also experienced a backlash against its deep-rooted antiwar convictions. After the Madison School Board attracted howls of protest for banning the Pledge of Allegiance from its schools on Oct. 8, the board reversed its decision this week.

In Cambridge, Mass., where pro-peace passions have traditionally grown as thick as the ivy in Harvard Yard, a patriotic mood prevails. Even though Cambridge has had a so-called peace commissioner on the city payroll -- charged since 1982 with promoting nonviolent problem-solving -- the enormity of the Sept. 11 attacks and the outrage about them have largely kept her quiet. The only war-related resolutions passed by the Cambridge City Council since Sept. 11 put flags on city streets and guaranteed full pay to city employees called up to serve in the military.

The difference between the moods in Cambridge and Berkeley probably stem from the cities' relative proximity to the terror attacks' ground zero, says Terrence Smith, chief of staff for Cambridge Mayor Anthony D. Galluccio. "Two planes left from here; a lot of people from the Boston area died," says Smith. "It's harder to make those leaps to pacifism when you could run into someone on the street who lost a mother, a brother or a father. The knee-jerk left-wing reaction is hard enough to support but it's even harder on the East Coast, in Boston, because of the proximity, because there are people walking our streets who lost people in the attacks."

Still, even in Berkeley and Madison, the municipal governments' antiwar moves didn't sit well with many residents. A week after Madison's school board banned the pledge, more than 1,200 packed a public hearing and after nine hours of debate, the board bowed to citizen pressure and voted to reverse its decision. "It was democracy at its best," says Bill Geist, a Madison resident who attended the meeting and called for the pledge to be returned to local schools. "There's a new breed of patriotism here. There are flags everywhere and for the first time, those who feel there's a peaceful alternative may believe that they'll be outnumbered."

Demographics -- the city's shift from being a university town to one more focused on business -- account for part of the shift, but not all. "The real energy came because of Sept. 11," says Geist.

Dona Spring, the Berkeley council member who first sponsored the measure, didn't return calls for comment. But other veteran progressives in this antiwar capital aren't surprised by the angry local reaction. "Berkeley's been moving toward the center for some time," says Gus Newport, the city's radical mayor from 1979 to 1986, who was known for his peace trips abroad and his opposition to U.S. foreign policy. The reasons, Newport says, are obvious: College students aren't as radical as they used to be, and because of a state-mandated end to rent control and the '90s boom, property prices have spiked, bringing a more affluent and conservative class to what used to be known as "the People's Republic of Berkeley."

Still, liberal strongholds like Berkeley are not likely to become the Bush administration's most ardent supporters. Peace activists in these cities believe they will once again become centers of antiwar opposition if the conflict in Afghanistan drags on and grows bloodier. Right now, Santa Cruz "is about 50/50, 50 leaning toward supporting Bush," says council member Mike Rotkin, a longtime radical activist, speaking after the town hall meeting Wednesday. "But that's just because they don't have a real good understanding of what's going on. If you talk to them for 15 minutes, you can usually open them up."

Mayor Dean of Berkeley agrees: "The support (for Bush) is tied to what's been going on; whether it will last depends on how the administration handles future events. If they go astray, you would see a strong antiwar movement appear in a flash."

But Dean expresses some dismay at her city's deeply ingrained antiwar attitudes. "Berkeley is still a liberal city, a lot more liberal than most cities," she says. "But what I see is a lot of folks from the '60s who are nostalgic and out of touch. They look back through rosy glasses and think of the unity of that era and they want to reach back for the good old days. They don't understand that this is not the Vietnam War. They don't understand or accept or don't believe that there is a difference. But there is a difference and it's pretty apparent. We got attacked on our soil and 6,000 people were killed. The only crime they committed was that they went to work in the morning."