The peace-loving people of Berkeley believe that fighting evil makes one evil. 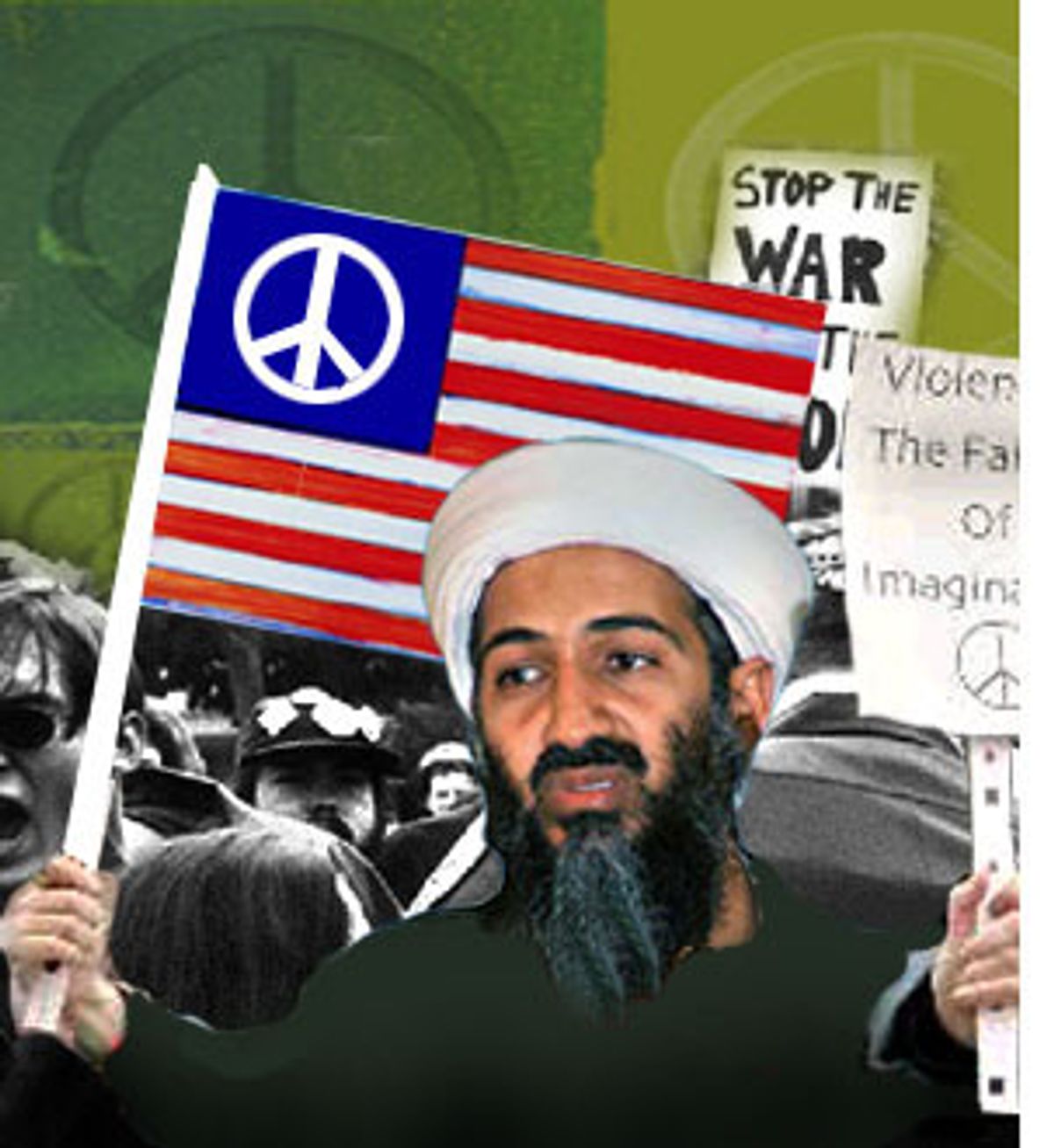 On Telegraph Avenue in Berkeley, near the Sather Gate entrance to the University of California campus, hawkers sell a T-Shirt adorned with a hammer and sickle and with the legend, "People's Republic of Berkeley." In the past, that seemed like a joke -- an ironic reference to the kind of fanatical 1960s radicalism that no longer held sway even in Berkeley. But apparently, the T-shirt is a more accurate description of reality in the nation's premier university town than anyone could have imagined. It is a satirist's dream and must be any sensible Berkeleyite's nightmare: Five weeks after the terrorist attack on the World Trade Center and little more than a week after the United States began its retaliatory attacks on Afghanistan and on Osama bin Laden's al-Qaida network, the Berkeley City Council called for the United States to stop fighting.

Enough ill can never be said about the depraved rationalizations of the antiwar faction with regard to the Sept. 11 attacks -- rationalizations that can be summed up as arguing that while the U.S. did not deserve to be struck so horribly by terrorism, the complaints that terrorists have about U.S. policy are absolutely correct. The movie director Oliver Stone spoke for far too many American leftists at a recent New York Film Festival panel when he referred to Sept. 11 as a "revolt," and suggested that the anti-globalization movement would soon make common cause with it.

But the gleeful reaction of this hard left is at least not masquerading as something else, or trying to assume a pained air of virtue and good intentions. The same cannot be said for the soft left. That left insists that it grieves for the victims of Sept. 11 but nonetheless sticks to, well, its ploughshares, I suppose -- it can hardly be expected to stick to its guns -- and opines that violence never solves anything. As a poster one sees often in Berkeley windows these days puts it, "Let us not become the evil we deplore."

The word deplore is perfect in this fuzzy-headed context -- prissy, mild, without any real sting or real feeling for that matter. Nannies used to deplore unruly children's table manners; colleagues used to deplore one another's opinions, while, of course, upholding their right to hold these "deplorable" views. So already the idea that what happened on Sept. 11 was something to be deplored should give the game away. Because anyone with any sense knows that evil is not something one deplores, it is something one fights.

But here, too, Berkeley is on another wavelength. For in Berkeley, the presumption is that in fighting evil, one becomes evil. It is hard to know whether the Berkeleyites who subscribe to this view really believe it or just feel that any use of American power is so monstrous -- indeed that the country itself is the real evildoer in the world -- that it must be avoided at any cost.

Perhaps this is why another popular poster in Berkeley these days insists "An eye for an eye makes us all blind." The problem with this neatly phrased bromide is that no one in the U.S. government has ever suggested doing to innocent people in Afghanistan what the terrorists did to innocent people in New York and Washington on Sept. 11. Had the American government wanted to, it could have carpet-bombed Kabul and Kandahar, when, as the bombing campaign started, the left insisted that it would. But in fact even the Taliban claim that only 300 civilians have died in the bombing and they have every reason in the world to exaggerate the casualty figures.

But Berkeley knows otherwise. It knows that violence solves nothing; it is sure, as a student I met on campus put it to me, that the only proper response to the terrorist attacks would be to build, as she put it, "bridges of love" to the future. And it is resolute in its cheap Buddhist certainties that the problem is one of the anger that resides in all of us, when in reality the essential fact is that the United States has been attacked, continues to be attacked with biological weapons, and has every right in both international law and commonplace morality to defend itself against the terrorists.

But then it appears that some Berkeleyites at least are unsure of whether the terrorists are Osama bin Laden's people or the U.S. government. One Berkeley city councilwoman, Dona Spring, was quoted in a campus newspaper as claiming that the U.S. was the terrorist, though she later insisted she had only said that this was the way many Afghans viewed America. Whatever she actually said, it is clear that engrained habits of viewing the U.S. as the root of evil in the world are so well-entrenched in college towns like Berkeley that it is not all that easy to separate the political program of Osama bin Laden -- U.S. withdrawal from the Persian Gulf, an end to the embargo on Iraq, and a pro-Palestinian rather than a pro-Israeli American stance -- from those of many influential, or at least noisy Berkeleyites. Again, they deplore the terrorism, but in the matter of their analysis of the world there is much they have in common with al-Qaida.

In such a context, it is hardly surprising that the Berkeley City Council passed its resolution calling on the U.S. to stop attacking Afghanistan "as soon as possible." You cannot demonize your own country for several generations and then switch gears when your country is attacked. Better, or at least more comfortable, to keep hewing to your old patterns of thought and feeling.

Would the Berkeley City Council have passed a similar resolution after Germany declared war on the United States in 1941? And would ordinary Berkeleyites who felt themselves to be highly moral people have insisted with equal confidence that violence solved nothing and that, by fighting the Nazis we would become Nazis ... sorry, "the evil we deplore?" It seems unlikely. But then again, perhaps they would have. After all, there were plenty of good Communists in America in the wake of the Hitler-Stalin pact who derided the British declaration of war on Germany as ushering in a conflict in which no good leftist need take sides.

That is more or less the Berkeley position today: a plague on bin Laden and a plague on the United States. One can only wonder how Berkeley and other ideologically similar college towns around the U.S. would react if it were their neighbors who were being murdered and their landmarks destroyed. What if it's not Manhattan or Washington next time, but the Shattuck Avenue BART station, where sarin gas is suddenly spewed on Berkeley's unsuspecting and peace-loving citizens. That is when the pacifist mettle of that little left-wing Brigadoon by the Bay will get a proper test.

David Rieff is the author of "Slaughterhouse: Bosnia and the Failure of the West," and the editor, with Roy Gutman, of the forthcoming "Crimes of War: What the Public Should Know."