The instant book that wasn't

"9/11 8:48" -- the first book published about the terrorist attacks -- was print-on-demand. So why wasn't it available everywhere, immediately? 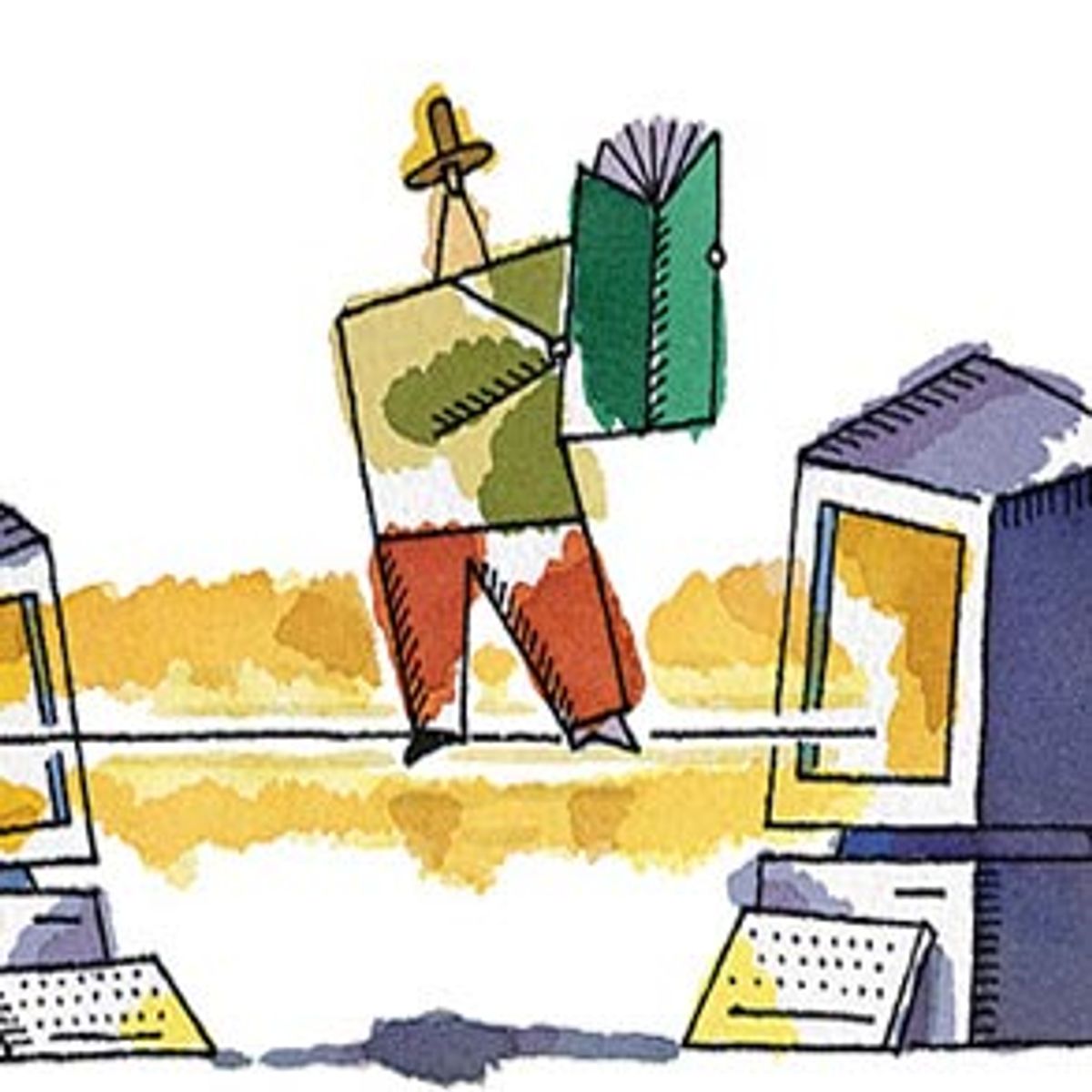 Nineteen days after the World Trade Center calamity, a small company specializing in print-on-demand publishing achieved a big victory down in Charleston, S.C. BookSurge LLC became the first publisher out of the gate with a quality book about the disaster. After five days of nonstop printing, the company had stockpiled 10,000 paperback copies of "09/11 8:48 AM: Documenting America's Greatest Tragedy," ready to go.

The book is a collection of writings culled from both the international journalism site BlueEar.com and the faculty and students of New York University's Department of Journalism -- among the contributors are Todd Gitlin, M.J. Rose and Robert Jay Lifton. On Oct. 1 copies began shipping to individuals and independent bookstores. By Oct. 12, the book had received coverage in the Los Angeles Times, the New York Times, USA Today and the morning talk show Today New York.

Time for a toast, right? Wrong. Because for a publisher like BookSurge, first out of the gate does not mean first into the stores. Indeed, three weeks after the fact, "09/11" could not be found at the most high-profile booksellers in trade retail land: Amazon.com, Barnes & Noble, and Borders.

Chalk it up to business-as-usual clashing with business-as-unusual. For starters, BookSurge published "09/11" to boost the image of print-on-demand publishing and raise $1 million for the American Red Cross at the same time. As such, it set strict terms for booksellers and distributors as to what percentage of sales should go to charity. But some of the primary sellers and distributors, namely Amazon and Ingram Book Group, the nation's largest wholesaler and Amazon's main pipeline to trade publishers, also had their own hoops to jump through -- hoops that are much easier for giant publishers like Random House and HarperCollins to maneuver around, but that can be challenging for small publishers, and especially small print-on-demand outfits.

The chokepoint created by Amazon and Ingram raises, for some experts, questions that take on a First Amendment tint. The issue is not so much active censorship as "what's buyable, practical, and probable," as NYU Journalism chair Jay Rosen and author of the book's foreword put it. "Amazon is the lifeline to a larger audience. It's possible you can sell a million copies of the book from BookSurge.com, but it's not probable."

BookSurge chief executive Bob Holt is looking ahead to that day nonetheless. "Ingram will be disintermediated, maybe 10 years from now, maybe 20," he said. "The model where you put a bunch of books in a warehouse and distribute them, that's a dying horse. It's still very valuable for bestsellers -- but what percentage of titles are bestsellers? Less than 1 percent of titles each year."

BookSurge was born in March 2000. It has three components: a print-on-demand unit; an operation for authors who pay some $200 to have their work "published" in ebook and print-on-demand (POD) versions; and an online bookstore selling ebooks and POD titles from any "publisher" that wants in. Ninety-seven percent of its business is POD. But even when it printed "09/11," it made sure to include a $6 ebook version in PDF format.

Three days after the Trade Center attacks, co-founder Mitchell Davis e-mailed BlueEar.com editor-in-chief Ethan Casey. "We wanted to contribute in the way we know best: POD," said chief operating office Jeff Schwaner. "And you could show that on-demand printing has a place in maintaining and preserving the freedom of the press because anyone from anywhere in the world has access to the book." By access, he was referring to BookSurge's Web site; a few weeks later, Powell's online bookstore (which is currently Salon's bookselling partner) would carry the $14.99 title.

Casey then e-mailed Jay Rosen on Sept. 17, hoping that the journalism program closest to the disaster site would have something to contribute. The two made a call for pieces, which were filed with Casey by Sept. 27. Casey e-mailed the "manuscript" to BookSurge, and two days later, the publisher had 10,000 POD copies of "09/11 8:48 AM."

Why would a print-on-demand publisher stockpile 10,000 copies of a book, and thus disavow the statement at the back of the book that "09/11" was an on-demand paperback? Simple: BookSurge was sure that a book this timely would be in high demand. So, deviating from its typical process, BookSurge did a webpress print run, churning out 36 books at a time (regular offset printing usually handles 72) instead of one.

BookSurge also lapsed back into old publishing industry paradigms by hiring an outside contractor at the beginning of October to work on getting the book into Ingram, Barnes & Noble, Borders and Books-A-Million. "To bring the book to market, that's the name of the game," said Terry Roberson, who used to manage cable systems for Time Warner.

But Roberson recalled that when he contacted Barnes & Noble on Fifth Avenue, a buyer told him, "'We go through the wholesale house to get our books.' It sounded like she was saying she couldn't order directly from BookSurge."

Why did BookSurge even want to approach the chains? Doesn't that negate the whole idea behind print-on-demand? "The simple undeniable fact is that a large number of books are purchased from chain bookstores," Schwaner says. "Barnes & Noble and Borders are very visible places to buy books."

While Roberson was mailing press kits and letters to the big guys, BookSurge co-founder Mitchell Davis was working on Amazon. On Oct. 10, he e-mailed his colleagues that Amazon's ebook division agreed to sell the $6 ebook but "has committed to giving ZERO to the Red Cross. All Red Cross money ($3.50 on an Amazon purchase) is coming from BookSurge out of proceeds still left after they take their cut."

The division handling printed books was a different story. BookSurge wanted to sell books through Amazon using POD technology. That means when an order is entered into Amazon's database, it would be zapped to BookSurge's print queue, and then printing would commence. But Amazon's POD vendor, for the time being, is Lightning Source (LSI), a subsidiary of Ingram Industries, which is a holding company for a group of businesses that also includes the Ingram Book Group.

In an e-mail at the end of September, Davis wrote: "To sell the POD book [at Amazon], we would have to integrate with LSI (Lightning Source), which is a subsidiary of Ingram (the 800 lb gorilla)." Holt said that this is what's known "in antitrust as a tying arrangement" -- implying that Ingram was leveraging its domination of the distribution business as a way to force retailers to go though Lightning Source for POD books. Of course, BookSurge is positioning itself as an alternative to Lightning Source, which may help to explain Holt's criticism.

Davis also wrote that for the print version to be "sold through Amazon it will go through Ingram and cost $22 at a minimum, and the Red Cross will get less of that money than they will if we sell it in BookSurge for $15."

But just getting a foothold in Ingram's system comes with certain requirements, namely, 10 titles for Ingram to stock or 50,000 in proven sales. BookSurge presented three titles, one of them "09/11."

At Ingram, Phyllis Hedges, who reviews applications from new publishers, referred BookSurge's representative to distributors who specialize in small publishers. If BookSurge signed on with one of those distributors, she said, Ingram would carry the title. BookSurge didn't take that route.

It's important to keep in mind just how demanding BookSurge's terms are in light of the industry standard. Not only must distributors agree to donate any profits from the book to the American Red Cross (typically a bookseller's publisher discount is 40 percent; Ingram's is between 50 and 55 percent) but they must pay for the books up front (usually there's a 90-day grace period) and are not allowed to return unsold copies. The last provision, by itself, would be more than enough to alarm most wholesalers and retailers.

Complicating matters is the fact that on the morning of Oct. 17 Amazon listed the paperback book for sale at $22, with a 4-6 week availability. "BookSurge [the publisher] placed an application to be part of our Advantage program, the program for small independent publishers, and it was approved this morning," said Amazon spokesperson Ling Hong. She added that the application constituted the contract agreement between bookseller and publisher.

This was news to the folks at BookSurge, who learned of the listing from a reporter. "They can't arbitrarily put a book up for sale without a contract with the publisher," Schwaner said. A sales representive telephoned Amazon to ask that the book be delisted. It was.

Around 8:40 p.m. on Oct. 17 Holt got a call from his ebook contact at Amazon. Not only was the company now game to donate proceeds from the ebook, the print division wanted to work something out. It appeared to have something to do with the intervention of the Fourth Estate.

"They said they'd been getting calls from reporters," Holt said. "It was a whole different Amazon."

A conference call was scheduled for the morning of the 18th. Holt said he didn't know what the price of the book was going to be. But he said he told his contact that he wanted Amazon to take at least 1000 copies.

Looking back at the whole struggle to get listed at Amazon and distributed by Ingram, Rosen noted, "This reminds me of why I'm a media critic. As a critic and a writer, I participate in the debate about media concentation. Now I'm participating as a victim. There's nothing new or novel about this choke point, it's completely the opposite, that's why it's interesting. It's almost like a generic case. No one is censoring us at all. It raises the issues of ineffective free speech, and it's totally related to media concentration."

Rosen and Casey simply want the book to be out there and in as many hands as possible. And they contend that it doesn't deserve the somewhat pejorative term "instant."

"I don't want this book confused with instant history," Rosen said. "It's not an attempt to provide the first rough draft of history -- it's not summarizing the O.J. Simpson trial a week later. It's voices speaking in the moment. Everybody in New York is working very hard to believe these events and accept the reality of them and explain, for instance to your children, that life is going to be different. And I think we're doing well at that. But one of the consequences is you lose a sense of how unbelievable it was, how devastating to our sense of the real those weeks were. That's the value of the book. It's more like the first huge shock of history than the first rough draft of history."

Elizabeth Manus is a reporter living in New York.