My son is leaving to live with his dad. It is only fair -- and horrendously painful 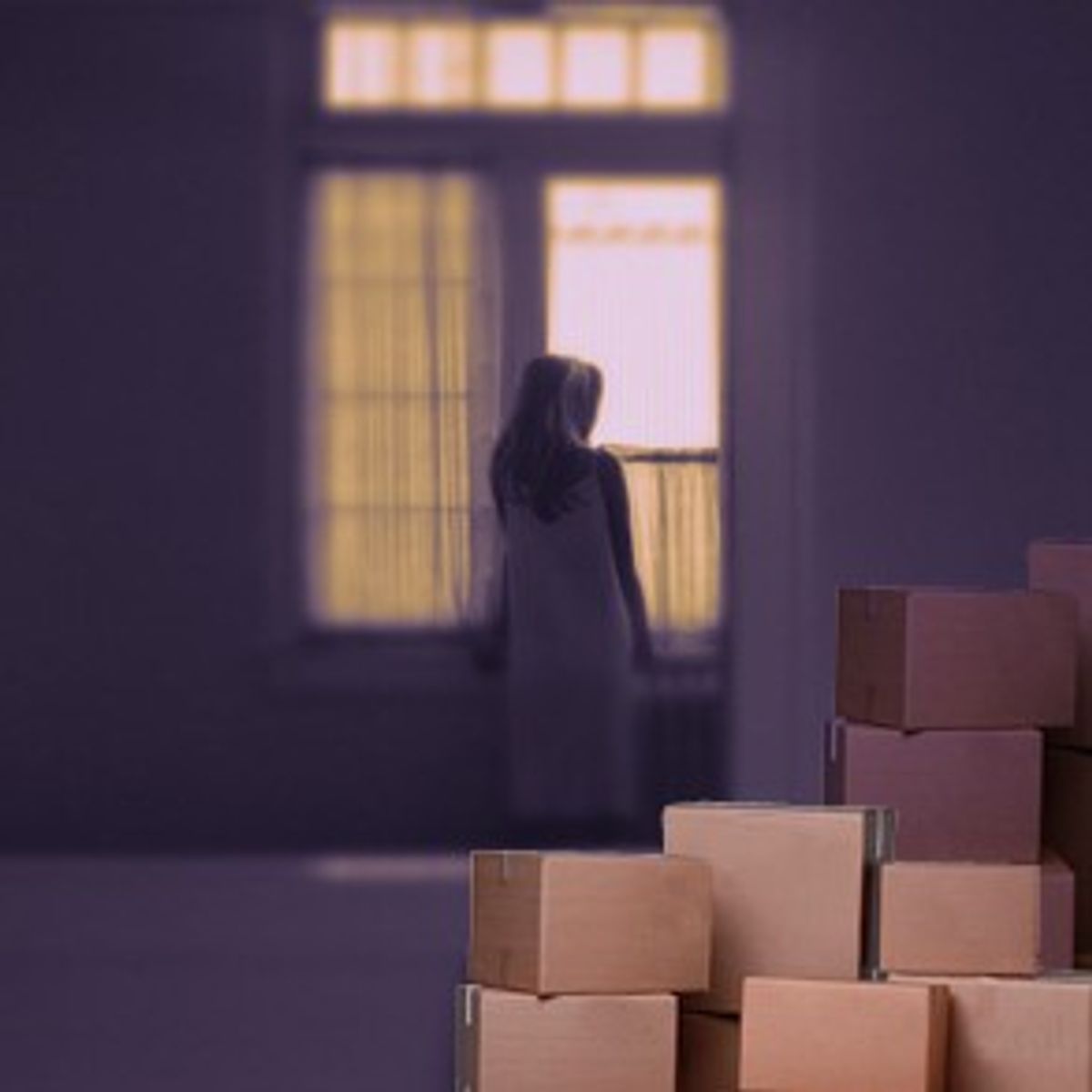 It is a warm evening just beginning its downward swoop toward dusk as I head out for a walk with the dog. Jonathan, my 14-year-old, is outside with his 5-year-old brother Iain. He's removed the training wheels from Iain's bike and is determined to teach him to ride a two-wheeler. I watch, a weight in my chest, as Jonathan runs alongside Iain, shouting words of encouragement, holding the bike -- and his baby brother -- steady.

And then, unsteady myself, I turn and walk away before my sons can see my tears.

In one week, Jonathan will leave me to go live with his father and attend high school in Virginia Beach, 350 miles south of our small northeastern Pennsylvania town. Instead of cornfields in his back yard, he will have the ocean. Instead of attending the one high school in town, he will matriculate at one of the 11 high schools in a teeming suburb.

He is exchanging a household of two younger brothers, a mom and a stepdad for a household of two divorced men -- his father and his father's friend -- and, on a part-time basis, the friend's two sons. I envision a world of unmade beds, scummy showers and frozen pizzas for dinner; a place where the large-screen TV is always tuned to ESPN, where socks lie moldering in piles throughout dank bedrooms, where every trash can presents the challenge of a basketball hoop.

In census bureau parlance, my son is leaving a "married couple" household for a "male householder" household. In my heart, he is leaving me for his father.

It is a day I thought might come. When Jonathan's father and I divorced 12 years ago, we agreed to share joint physical and legal custody. It was a decision that was considered odd at the time -- even by our lawyers, especially when we also agreed that neither of us would pay any child support, that we would just split large expenses, which, in those days, meant day care.

For nine years, the arrangement worked beautifully. Even after I remarried and had two more children, my ex-husband and I continued to live five minutes from one another; we even had keys to each other's houses in case Jonathan needed a toy or piece of clothing from one while he was at the other. At soccer and baseball games, Jonathan had three parents cheering for him in the stands, and my other two children grew up thinking that Jonathan's dad was a member of our extended family. Once, a mother at a soccer game, having seen my ex playing with my two younger kids, blurted: "I just can't figure your family out!"

Then, when Jonathan was 11, I got a job offer in California, 3,000 miles away. My husband and I agreed that if my ex wanted Jonathan to stay in Virginia with him, we wouldn't fight it. Instead, when he saw how excited Jonathan was about living on the opposite coast, my ex gave us his blessing, even said he'd consider looking for a job out there.

But our stint on the West Coast didn't last long -- after a year we moved back east to this small hamlet on the Pennsylvania border, a six-hour drive (or seven-hour train ride) from Jonathan's father. And, as I somehow knew it would, the time has come to pay up.

"Why don't you fight this?" my therapist asks, when she sees the pain I'm in. But that thought is so ludicrous to me it never even crossed my mind. I've written too many stories about what happens when divorced parents fight over their children. And besides, even if I won, I'd lose. Jonathan would hate me. His father would hate me. The carefully constructed relationship we've built over the past 12 years would crumble like a sand sculpture at high tide.

And so I'm trying to present a cheery face to one and all. I plan weekend trips down south to see soccer games, arrange for a faceless principal to send me copies of all the "Dear Parent" letters and report cards. I try to figure out what handle to use for the instant messaging so I can communicate in real time in 14-year-old-ese. And inside I'm screaming. Inside, I'm so angry at this turn of events that I alternate between wanting to kill my ex-husband, my son or myself.

But I don't do this, of course. I continue on my suburban course. I drive to soccer practices. I argue with the car dealer over the new van that broke down on the way home from the dealership (from the dealership!). I wipe the bathroom floor when the 5-year-old misses the toilet, and I tell the 14-year-old, who is leaving me tomorrow, that he needs deodorant.

Of all the profound things a mother is supposed to say at this moment, this is all I can think of: "Jonathan. You stink. Did you put deodorant on today?"

He spent all day yesterday packing. His stereo. The dusty books on his shelves. His laptop (well, my laptop). He took the collage he and his dad made of their cross-country trip when he was 9; the math journal he wrote in 7th grade; all his snowboard/skateboard/auto magazines. The boxes are piled in the garage, in front of the refrigerator, so I can't even get to the white wine I crave.

His room, for once, is pristine. Bed still unmade, but other than that, no sign of the boy who dwelt there. It is so bare. I can see the carpet on the floor, there is no smell of adolescent funk, no rap roaring from the speakers. No speakers.

On his own, with no prompting, he not only emptied the dishwasher but also cleaned the kitchen. I heard him as I sat in my office pretending to work. And I steadfastly refused to go in there and acknowledge what he was doing; because if things were normal, he'd never be doing that.

The dog knows he's leaving. Tyler just mopes around, his big brown eyes looking up at me as if to ask, "How could you let this happen?" "I'm sorry," I want to say. "There's simply nothing I can do."

And that is the most difficult part of all this. That there is nothing I can do. There's no point fighting, so I drive down the road after taking him out for dinner, singing at the top of my lungs to Bruce Springsteen, tears streaming down my face.

Today, as he waited for his dad to pick him up, he hit golf balls in the back yard. Thwack. Thwack. The plastic balls soar down the burned lawn into the brush. Over and over again. And I know he is thinking how much he wants to be away from this. Suburbia. Soccer moms. Minivans. Cornfields in the backyard. He's going where the Atlantic Ocean will be his backyard, surfing his recreation. The soft sand and happening boardwalk will be a two-minute walk away. How can I compete?

I walk out to where he swings the club and stop, the heat from the morning on my head, the scent of overripe tomatoes from the garden heavy in my nose.

He grins, abashedly, in that way that 14-year-olds grin when they are speechless.

"In fact, I absolutely hate it."

And then he does something so unexpected, so un-Jonathan-like that I think maybe I have gotten through to him. He reaches over and awkwardly hugs me. And I don't hug back. I keep my hands in my pockets, my head turned down as this child, now taller than me, wraps his bony arms around my shoulders and squeezes.

Then he steps back.

"Hey," he says. "I'd be leaving eventually. It's just happening a bit sooner."

"No," I tell him, sure at least of this one thing. "That's like saying we're all going to die eventually, so it doesn't matter if you die now rather than later."

I peer at him from under my eyelashes. The sun is too bright.

"I'm going to be in your face, you know," I say. "E-mailing. Calling. Driving down there. Your grades slip one iota you're back here. You belong here, you know."

He just continues that embarrassed grin. He has nothing else to say. What do you say when your mother's heart is breaking and you're only 14?

And then I have nothing left to say.

I don't want to be here when his father arrives, so I say I'm going to tell him goodbye now. There are light bulbs and faucets to buy at Home Depot, the Saturday errands to run.

I stand on my tiptoes and hug him. He pats my back awkwardly.

Debra Gordon is a freelance writer living in Nazareth, Pa.