A Hello Kitty you can drive

The future is pregnant with friendly, mood-sensitive cars. Fasten your seat belt, it's going to be a really, really cute ride. 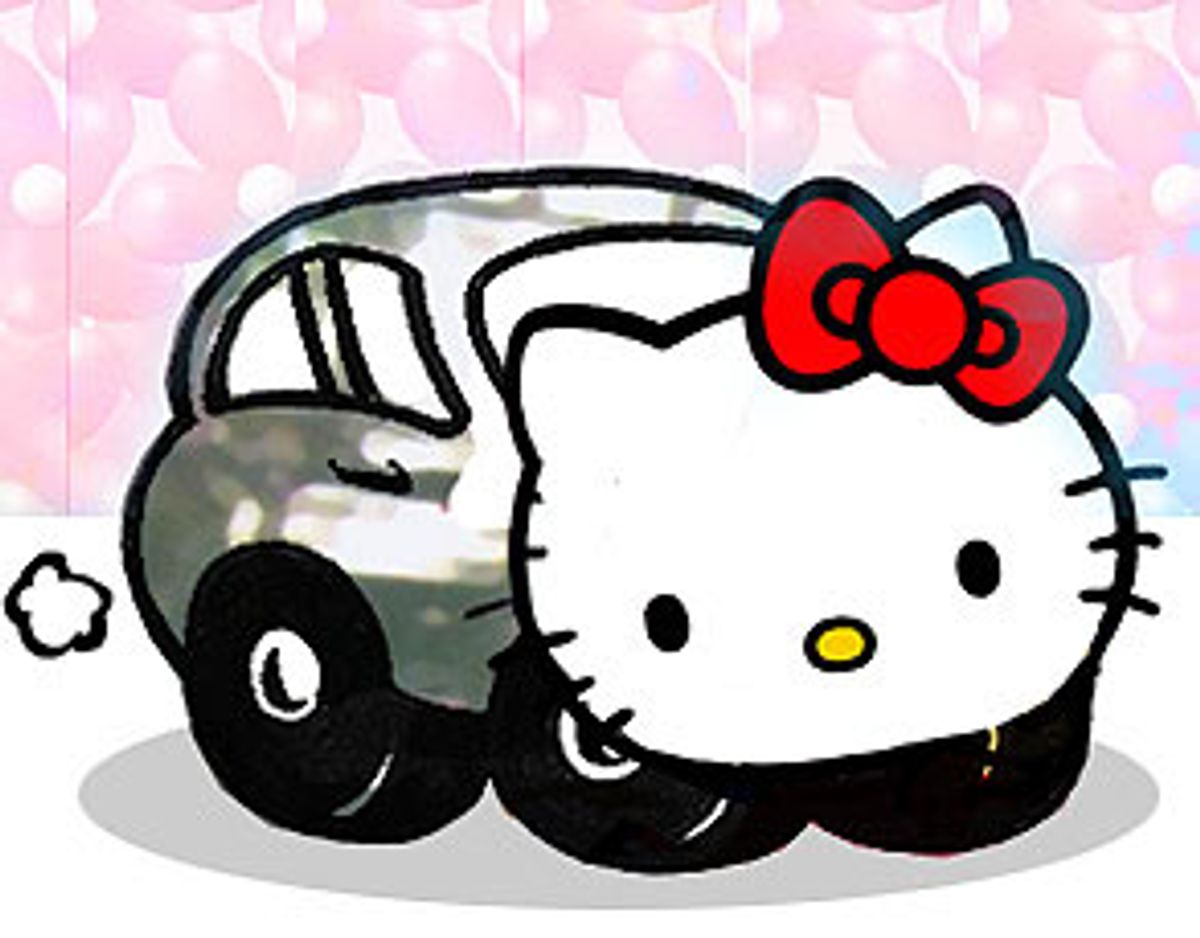 From an early age I've strongly favored appliances that talk, teapots that walk, chairs that jitterbug and automobiles that flirt by batting the eyelashes over their headlights. I've had an unwavering commitment to topiary ever since I can remember. I've always been a staunch supporter of anything that enables the inanimate to become animate -- from Silly Symphony cartoons to Gaudi's architecture to select pharmaceuticals. It's a stand I took in my youth and I will not step away from it now.

You can imagine, then, how thrilling it was to hear that a car has been developed that wags its tail, cries and tries to relax you when you're tense. It also lights up with a warm glow when its owner approaches and glows blue (and displays teardrops) when it gets a flat tire or runs out of gas.

This Saturday at the Tokyo Motor Show, according to Reuters, a new vehicle developed by Toyota -- in collaboration with Sony -- will be shown to the public for the first time. They're calling it the "pod." Depending on your state of mind, it's either a fabulous or frightening invention and your response may range from joy to annoyance to psychosis. Some among us will think the pod is merely cute -- a response that is probably the most significant from the manufacturer's standpoint: cute sells more cars than psychosis. They would like us to think of it as a Hello Kitty with a 1.5 liter engine, an Aibo that'll get you and three friends to the grocery and back.

Information released by Toyota effuses: "This concept car explores the potential for communication between people and their vehicle." Well, it's about time. Our internal combustion powered beasts of burden have been ferrying us around for over a century and our ability to communicate with them (and vice versa) has remained utterly primitive; the car-driver relationship often commences when the thing receives a swift kick in a soft, vulnerable spot (its tire) from the prospective master, and things get worse from there. The Toyota/Sony pod promises to change all that -- at a time when relationships are more important than ever.

To begin with, the four-passenger pod has a face -- headlights where eyes would be, side mirrors in place of ears and expressive curved mouthlike grooves that light up when the vehicle is happy or sad. There's also the aforementioned wag-capable tail (a rear-mounted antenna) and, as the report points out, the pod takes photos of its passengers "when the tone of the conversation indicates it is a happy one." What's more, it bids you farewell when you park and turn off the engine. A physical intimacy option is not part of the standard package, but some enterprising after-factory outfitter will almost certainly correct that oversight. (And once they do, spending the evening -- parked -- will become America's favorite solitary pleasure.)

Not since "My Mother the Car," NBC's prophetic 1965-'66 Jerry Van Dyke sitcom in which the star's automobile was the reincarnation of his mother, has anthropomorphism swerved so decisively into the fast lane. (Some will cite "Knight Rider's" K.I.T.T. and Batman's voluptuous, obedient coupe, but those were specialized law enforcement vehicles. You have to agree that the populist Toyota pod is, if anything, conceptual kin to Van Dyke's mom-machine; Mr. Ed minus the stall cleaning.)

And it's no coincidence that the machine-as-friend trend is shifting into high gear now, as the race to eliminate the planet's nonhuman creatures is accelerating. Indeed, if we stay busy, we should be able to do away with most of those messy, noisy, disorganized animals by the end of this century, but we must start planning today for something tidier, less troublesome, but equally companionable to take their place -- a notion Japanese companies seem to have understood for quite some time.

Bandai Co. Limited's Tamagotchi virtual pet and Sony's Aibo robot-dog paved the way for friendly machines, and have been sterling successes -- as soon as they get Aibo to run and catch a Frisbee, sales should go platinum. Meanwhile, last week Japan's Omron Corp. announced its new robot cat, NeCoRo. Combining sensor technology and artificial intelligence, Omron's catbot will, Reuters reports, "develop personality traits based on how it is treated by its owner." Omron's Toshiro Tashima explained that the acrylic fur-covered creature will develop a gentle, friendly personality "if you hold it a lot." However, Tashima said, "if you don't play with it much, it'll ignore you." (This really sets the NeCoRo apart from real cats, which ignore you regardless of what you do -- unless they want something.)

In the news story, Tashima added that the technologies developed for NeCoRo (the name's derived from the Japanese word for cat) will, in the near future, likely be applied in more banal appliances, such as vending machines -- which brings us back to Silly Symphonies and dancing furniture. It's obvious (isn't it?) that the inspiration for Toyota's pod comes from that distant, mysterious place where someone first looked at, say, a vacuum cleaner and asked "Why not?"

I, for one, have often thought it a pity that after Mr. Vacuum has dutifully sucked all the dust out of my carpet, after his huffing and puffing and wheezing have rendered my living room spotless, his reward is to spend a week in a dark closet. What a wonderful world it would be if -- thanks to sensor technology and artificial intelligence -- Mr. Vacuum could accompany me to the mall for a little window shopping and an ice cream cone once his chores were done. I look forward to a day when -- in place of filthy, dirty, disgusting flea-ridden dog parks -- there will be bright, white pastoral refrigerator parks where me and my new SmartFridge can stroll beside a pond, play checkers, have a picnic. What would be nicer than taking a wilderness hike with a microwave oven, an electric can opener and a coffee maker scampering playfully up the trail behind you? Nothing I can think of. Feel like a movie, but hate to go alone? Take your snow blower. Love to clog dance, but can't find a partner? I know a Stratalounger who'd love a night out. Or just want to canoodle by the campfire? Come on over, Ms. fully-loaded Range Rover!

Sadly, the potential downside of the mood-sharing machines movement must also be anticipated. Where there's function, there's dysfunction; thinking about what a pride of poorly socialized catbots could do is not pretty. Likewise, having a blow dryer that's tuned in to your emotional frequency might not be entirely pleasant, especially on date night (the problems an artificially intelligent electric blanket could offer are best not dwelt on). And it boggles the mind to consider the daunting overload the therapy industry will experience once all devices from DVD players to chainsaws develop the inevitable emotional problems. Sigmund Freud himself would no doubt balk at the task of treating a drill press undergoing a nervous breakdown.

And yet, as with all our technological revolutions, we mustn't let scaredy cat tendencies turn back the tide of progress. The Toyota/Sony pod is just the beginning, the first nontoy machine whose reason for being (apart from the utilitarian one) is to mimic and sympathize with its master's moods. It is a mechanical device that is also cute.(Whoa! That's all the emotional food groups in one easy-to-use product!).

The introduction of the pod is a signal event. Finally, the world is reshaping itself to more closely resemble a 1950s cartoon. Some of us are convinced that this is a good thing. On the other hand, those of you who believe that appliances must not talk, teapots must not walk, chairs mustn't jitterbug, automobiles shouldn't flirt (or cry or wag their tail) and that topiary has no place in contemporary society are, quite simply, letting terrorism win.