Kevin Spacey rises as an interplanetary messiah in this soggy -- although expertly made -- sci-fi Jesus movie. 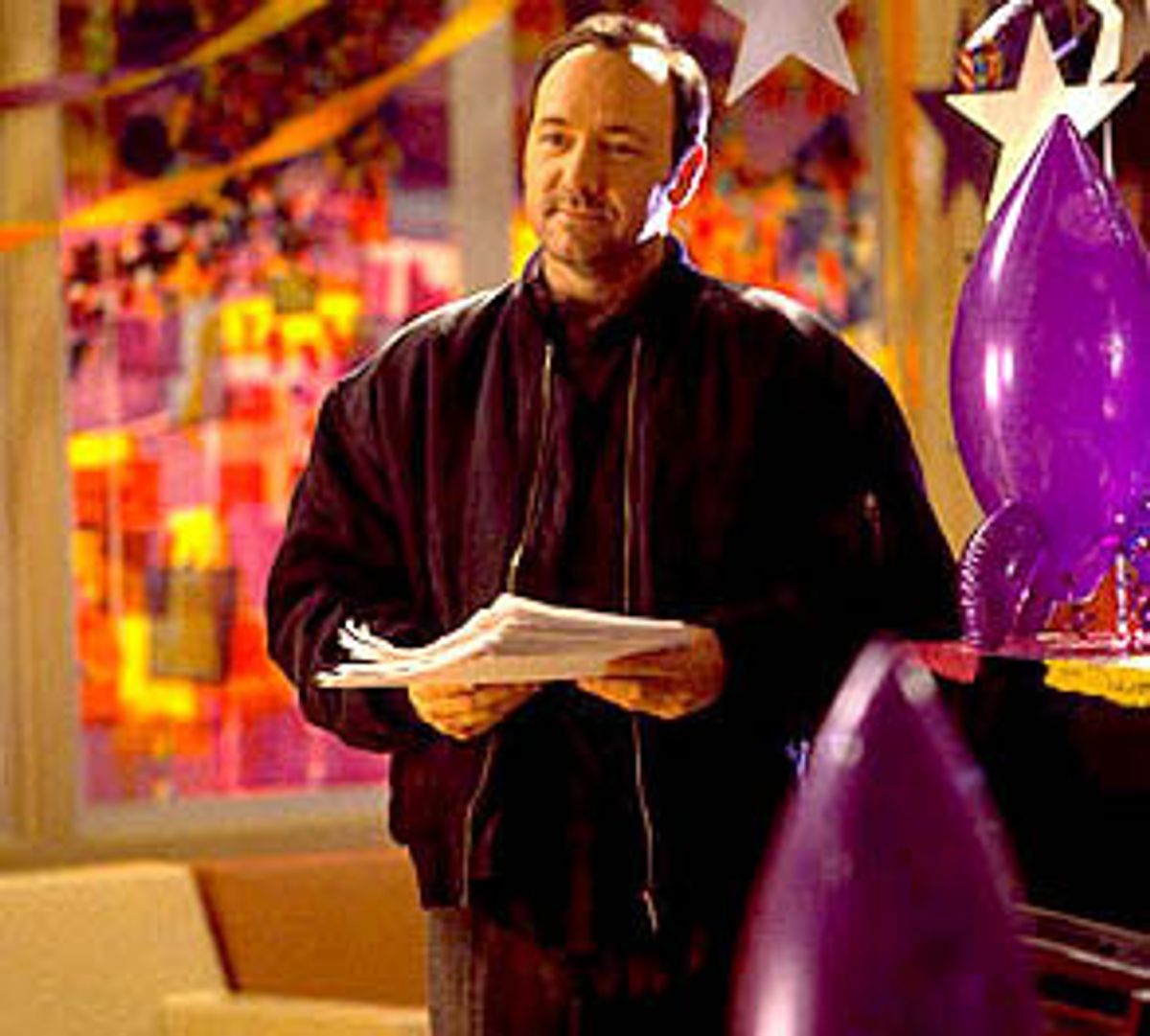 It's hard to see how "K-PAX" could be made any better than it is. The sci-fi parable, about a mental patient named Prot (Kevin Spacey) and the psychiatrist (Jeff Bridges) who almost believes him, hums with skill and finesse. Prot, who insists he's an alien from a planet 1,000 light-years from Earth, explains that the inhabitants of planet K-PAX travel on beams of light. Playing off that, director Iain Softley and cinematographer John Mathieson illuminate their frames with beams of colored light refracting through a glass paperweight, sun dots forming a mesh pattern across the screen, reflections in mirrors and pools of water and human figures seen through opaque glass that seem to mutate and change form. Visually, the movie is a meticulously encrusted objet d'art put together with the dazzling precision of a Cartier brooch.

Softley and Mathieson have also found some of the most unusual shots of the Manhattan skyline in recent movie memory. Filmed from low angles, so that the buildings seem to be looking down at us, a typical shot will include the spire of a 19th-century church next to a chunk of a sleek glass skyscraper -- an image of the traditional and the futuristic sharing the same breathing space. When the action switches briefly to the New Mexico desert, everything we see seems saturated with clean, bright light, as if the sand existed only to soak up the radiance beaming down from the sky.

And when a series of climactic flashbacks reveals Prot's history, Softley and Mathieson create them with (I believe) an anamorphic lens that stretches and elongates the images. With the exception of some solarized time-lapse shots of the moon rising over the desert that strain to be visual in an overused style, there isn't anything in the look of "K-PAX" that feels familiar. Softley knows how to compose shots for the Panavision screen, and he has an instinctive sense of where to put the camera. The movie has a visual rhythm and flow that barely ever falters.

The British-born Softley, whose previous work includes the wonderful "Backbeat," about the Beatles' early days in Hamburg, and the Henry James adaptation "The Wings of the Dove," which manages to retain the simultaneous and myriad motives of James' characters while still achieving a sense of drama, is one of the most talented directors to emerge in the last 10 years. And he seems a filmmaker who can comfortably work in a range of styles and material.

Unfortunately Softley is dealing with pretty soggy material here. "K-PAX" is a sci-fi Jesus movie with Spacey's Prot as an interplanetary messiah. Prot is the lunatic as holy man, the wise being who teaches humans how to live and heals their neuroses. There's no need for laws or government on K-PAX because the planet has evolved to a higher state of evolution where crime is unthinkable. And there's no need for the concept of biological families because raising children is the responsibility of the whole society. Doctors don't exist because K-PAXians have learned how to heal themselves. When Bridges tells Prot that on Earth, Prot is the patient and he is the doctor, Prot asks him why he hasn't healed all the sick souls in his charge.

Charles Leavitt's script, from a novel by Gene Brewer, is familiar from dozens of other woolly-headed anti-establishment pictures of decades gone by. The message is that we're wreaking disease on our planet and ourselves because we haven't learned to embrace our higher power. (Listening to Prot spiel his little object lessons is like encountering those people who think we should confront the Taliban with love.)

You can see traces of a lot of other pictures in "K-PAX," including the 1984 "Starman," in which Bridges played a holy alien. When Prot's influence causes the patients to start revolting against hospital authority the movie suggests a loopy version of "One Flew Over the Cuckoo's Nest." And when exposure to Prot starts Bridges' shrink thinking about what's lacking in his own life, the movie flirts with the "who's crazy and who's sane and who's to say which is which?" hoo-hah of "Equus." (There is one nifty moment when the patients throw a party with a space travel theme; the bright party hats and costumes and planet party decorations may bring a smile of nostalgia to anyone who was ever lucky enough to see Sun Ra's Arkestra.)

Prot's fellow inmates are a collection of "colorfully" eccentric loonies and some of them, like Celia Weston doing a third-rate Blanche DuBois, may make you cringe. Others are harder to sort out your feelings about. David Patrick Kelly has made a career of playing creeps, twitches and villains. (He was the killer who invaded people's nightmares in the swell thriller "Dreamscape," and the deranged gang member in "The Warriors" who, at the end of the movie, clicked Coke bottles on his fingers and chanted, "Wahrr-ee-errrs come out and play-yay!" until it seemed like the sound of his voice was driving into your spine.) Here, he's got one of the sappier roles as a longtime resident of the psychiatric hospital, an obsessive-compulsive to whom Prot brings peace. But it's no small thing for a character actor, after more than two decades in the movies, to get to show some human warmth, and Kelly dries out the role as much as he can.

What keeps the movie going, besides Softley's intelligent direction and Mathieson's inventive cinematography, is the actors' duet between Spacey and Bridges. Soft-spoken and wearing dark glasses to shield his eyes from Earth's brilliant light, Spacey gets into character and stays there. His best moment is when he's rolling around on the ground barking and communicating with Bridges' big, friendly golden retriever, then running off with the pooch all stiff-legged and floppy-armed. But Jesus roles get pretty insufferable pretty quick and there's something smug in his hipster-spaceman-Christ routine. It's not just the mark of a superior being but the mark of an actor eating up the chance to play superior.

Jeff Bridges is one of those actors whose performances are their own kind of special effect -- the kind that leaves your mouth open, asking, "How'd he do that?" Bridges' career has more than its share of those moments, usually flashes of real, complex human emotion in scenes so sappy or obvious they should be unplayable. He's got a couple of those moments here, one a sharp intake of breath when he realizes he's solved the mystery of Prot that's halfway between a sob and the shock of revelation. Another is the soft "son of a bitch" that he utters when it looks like Prot has pulled off a logic-defying stunt; the way he delivers the line it comes off as a small beauty of bushwacked admiration. Bridges makes the idea of Earth as insufficiently evolved suspect. An actor who's been as consistently sane as he has been over the years makes you think that if the planet can produce a Jeff Bridges, we're doing pretty damn good.