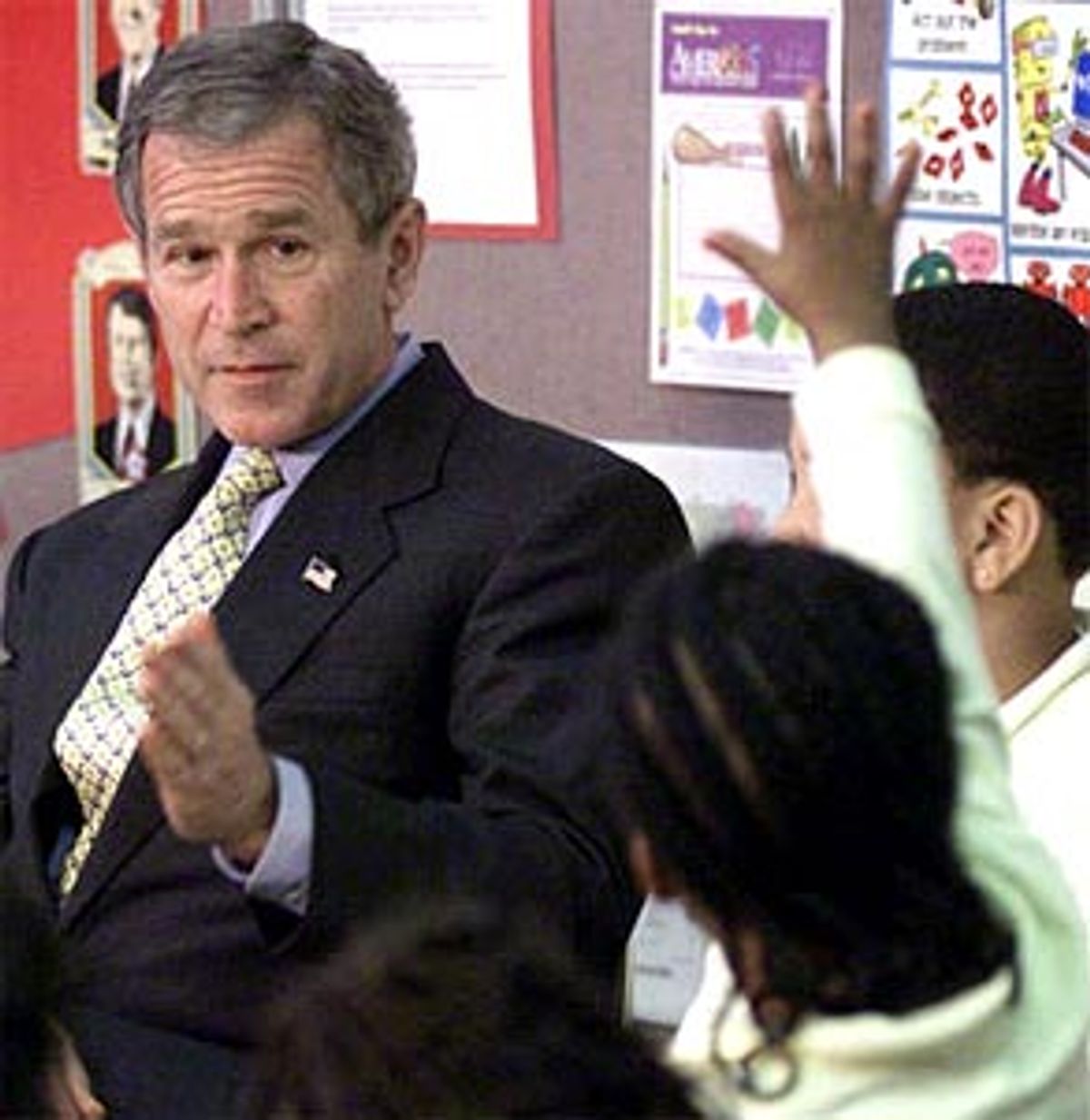 On Thursday morning, when the U.S. war on terrorism was beginning to look alarmingly leaderless at home and abroad, I turned on CNN and found President Bush where he always seems most comfortable: among schoolchildren.

Bush was kicking off his newest initiative, "Friendship Through Education," in which American students are being recruited to reduce international tensions by finding Muslim pen pals. "We're here talking about how we can best conduct a war against evil, and you can play a part," Bush told students at Thurgood Marshall Elementary School in northeast Washington. "You can be an integral part of that by establishing friendship."

Watching Bush on CNN, I couldn't shake the thought that the president was inexplicably channeling Hillary Clinton, in her most cloying, annoying "It Takes a Village" incarnation. What else could account for his spending hours on his pen pal initiative at an elementary school, on a morning when his administration, and thus the country, seemed scarily out of control?

In the New York Times alone, his health and human services secretary, Tommy Thompson, had been pilloried by public health officials for bungling the deadly anthrax scare (the Times charged him with "missteps, miscues and misstatements"); spokesman Ari Fleischer was quoted contradicting himself about whether the U.S. mail is in fact safe; and top officials described a high-level meeting they'd held to address the fact that, despite the creation of a Cabinet-level Homeland Security position, the homeland had never been quite so insecure.

"The lesson we're learning," an unnamed administration official told the Times on Wednesday, "is that you can bomb the wrong place in Afghanistan and not take much heat for it. But don't mess up at the post office."

That fatuous assessment of the administration's troubles is almost as scary as the troubles themselves. Anthrax is indeed looking like a bigger threat than anyone thought even last week, when only one person had died (Thompson, you'll recall, first suggested the initial victim got the disease by drinking from a polluted stream) and most cases diagnosed were the less-dangerous skin anthrax. Now two postal workers are dead of inhaled anthrax, and others have come down with the deadly disease, including the latest case in the mail center of the State Department diagnosed Thursday.

And despite the jocular reference to bombing "the wrong place in Afghanistan," the overseas war against terror may not be going much better than the domestic one, and eventually that could be more dangerous to the U.S. than anthrax. Americans may be distracted by the terror threat at home right now, but they'll pay attention if U.S. soldiers replace postal workers as the frontline victims of a badly fought war. Even before that, the fragile coalition backing the U.S. attack on Afghanistan could fall apart if too many more "wrong places" are bombed -- in just over two weeks the campaign has mistakenly bombed a U.N. demining operation, a hospital and a Kabul neighborhood.

But the most alarming pronouncement of the last few days came Wednesday, when a top Pentagon official expressed "surprise" that Taliban forces were "tough warriors" who were having more success than he had expected fighting the U.S., thanks to their familiarity with their own terrain.

"I am a bit surprised at how doggedly they're hanging on to power," U.S. Navy Rear Adm. John Stufflebeem told reporters at a briefing. "For [Taliban leader] Mullah Omar to not see the inevitability of what will happen surprises me." No doubt the surprise is mutual. Taliban leaders must be stunned at a top Pentagon official's failure to have mastered Afghanistan 101: It's a nightmarish place to fight a war, with rugged mountains and a warrior culture that's defeated would-be conquerors from the Soviet Union back to Alexander the Great.

So it was hard not to ask Thursday morning, with his administration in disarray and the nation at an even higher level of worry about the terror threat than it was the day before: Where was George?

Finding him lecturing school kids, in his singsong voice, about the war against terror was hardly reassuring. "I want to assure the boys and girls, these attacks didn't come from a nation or a religion," he said. "These attacks are from some people who just are so evil it's hard for me to describe. ... It's just hard for all of us adults to explain." Personally, I think the president ought to leave that job to other adults, and get busy running the war.

It would also help if the rest of Washington's leaders stopped acting like children. Rep. Dick Armey went ballistic on Chris Matthews' "Hardball" Wednesday night, blasting the Senate's "foolhardiness and recklessness" for keeping its offices open despite the anthrax scare, after Matthews quoted Sen. John Warner -- a fellow Republican -- criticizing the House decision to shut down. In recent history only Democrats have mastered the trick of arranging themselves in this sort of circular firing squad; it's hard to remember Republicans rumbling like that, ever.

Maybe in this kind of crisis the parties' identities begin to blur, anyway. There I was on Thursday, a lifelong Democrat, having what I can only describe as a Republican moment: Watching the president do his Hillary Clinton act, I found myself wishing he'd morph into a manly commander in chief and take control of the war, not waste his time on a pen pal program for school kids. Besides, when it comes to talking about the war, I feel the way conservative parents do about sex: It's my job to reassure my daughter about the war against terror domestically and in Afghanistan. It's the president's job to run those campaigns.

And he needs to step into the breach, now. The latest chaos points out what's wrong with the Bush administration, which the present rally round the flag atmosphere has made it difficult to talk about. Questions about who's in charge have dogged the administration since Sept. 11, when Ari Fleischer lied to reporters and said the president stayed away from Washington because of direct terror threats against him. For a time Bush rose to the challenge before him -- his speech to Congress Sept. 20 was the best he ever gave -- but in recent days he has stumbled. He is back to looking small and overmatched, and sometimes even a little scared.

At a time when the debate over whether and when to test for anthrax was raging, he flubbed the question about whether he himself had been tested, simply repeating over and over, "I don't have anthrax," but refusing to be honest about how he knew that. His tough Texas talk about bin Laden from the early days of the campaign -- we were gonna round him up, smoke him out, get Afghanistan to cough him up -- has given way to new platitudes about evil and evildoers. Sometimes he seems to understand the complexity of the war against the Taliban; other times he appears as surprised as Rear Adm. Stufflebeem by the determination of our foes.

As a result, his administration has begun to look as far-flung and decentralized as al-Qaida, only less well organized and effective. There seem to be independent "cells" organized around individuals -- Donald Rumsfeld, Tom Ridge, Colin Powell and the ever-hidden Dick Cheney, who may be in a cave like bin Laden -- but there's no one leader. Of course it should be the president, but Bush sometimes seems more comfortable playing elementary school principal. All of us, Democrats too, have to hope he rises to the challenge again.